Fire Emblem Engage brought with it brand new mechanics for the series, adding more depth to combat and forcing you to strategies more coherently as you play.

On harder difficulties, it will be necessary to plan ahead if you want to finish each map without losing a unit forever. If you've played Fire Emblem, you'll know how to handle these situations and adapt on the fly, but sometimes thinking outside the box will give you an edge in combat. 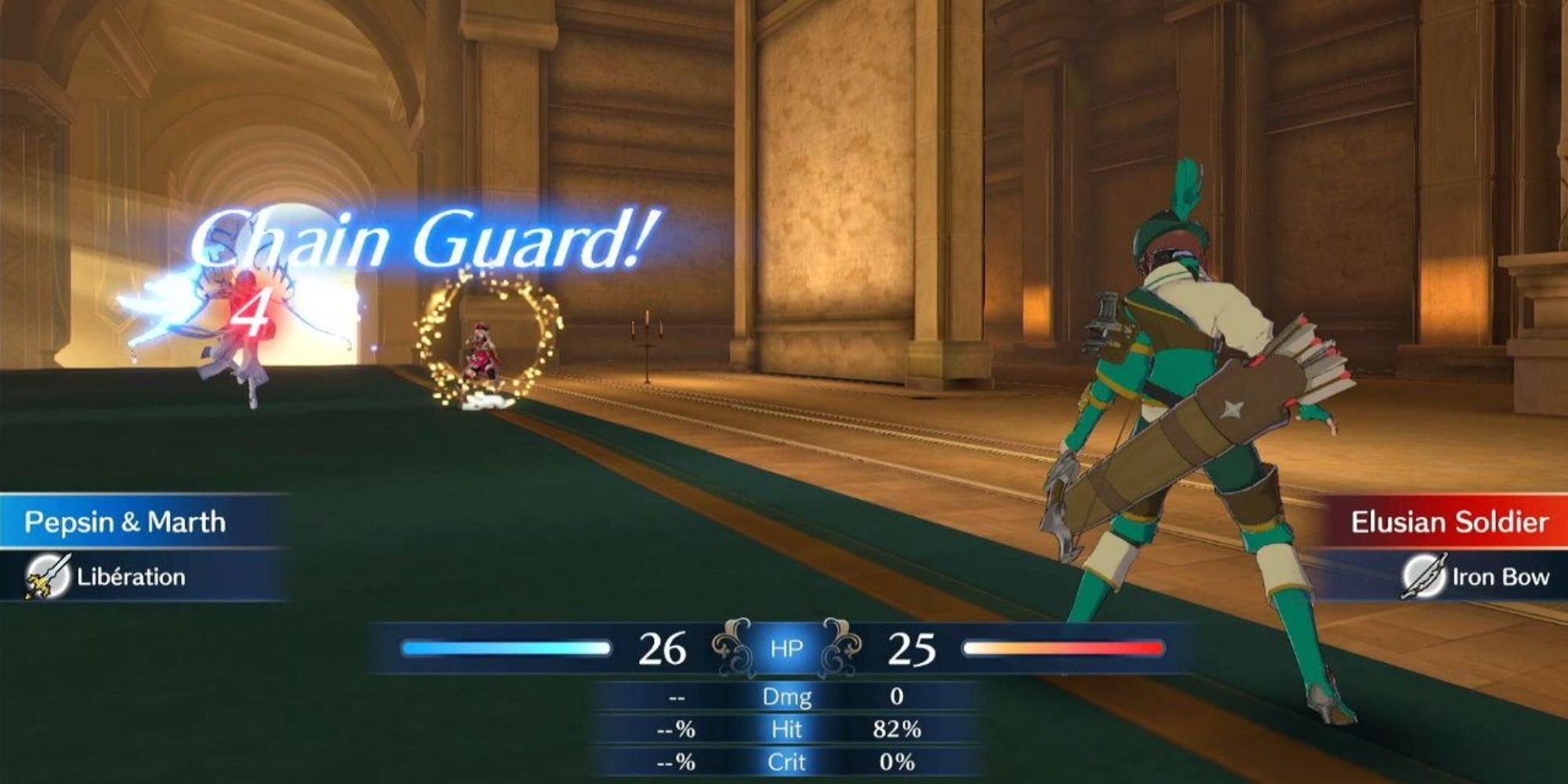 You might not care for this skill or you may not even try it out because it's attached to one of the more annoying characters you get at the start of the game. Framme's Chain Guard ability will help you as you progress through the maps if you want to invest time into her or any other Qi Adept unit you get.

Qi Adepts can use this skill to absorb one hit for an adjacent unit, fully mitigating damage. The one using the skill will take a hit instead of the intended one, which effectively means if you're going to get hit by an enemy for 30 or more damage, you can get this number down with Chain Guard. It's incredibly busted, and the AI will overuse it, so you should too.

9 Learn How To Avoid Tank To Bait Enemies 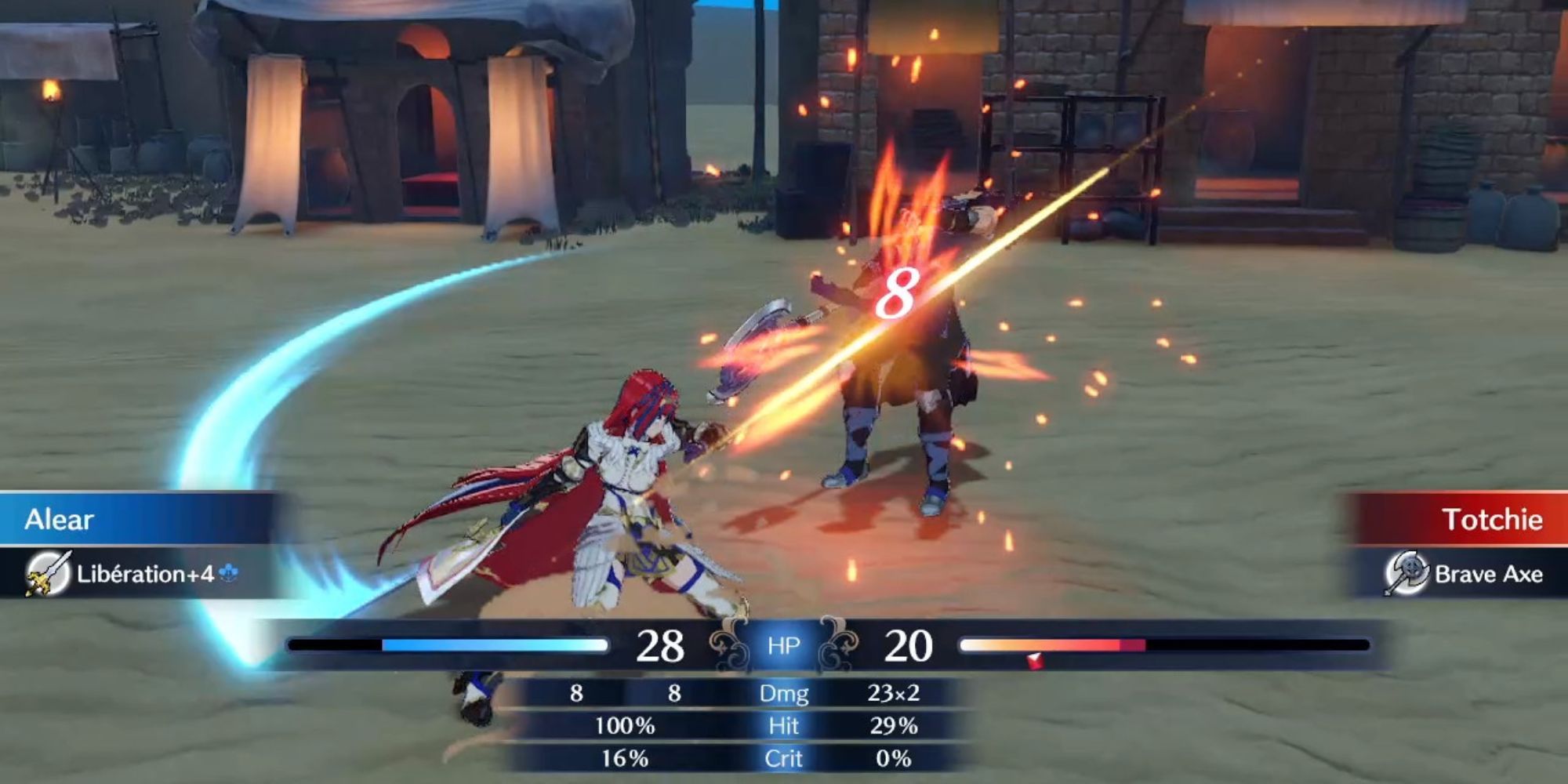 Avoid Tanking is a term in Fire Emblem which is all about using your fast units with high avoidance to wait in combat range and hoping they can dodge the attack coming. This is used to bait enemies closer to you, so you can start the fight off strong instead of going to them and being caught out by reinforcements or wandering into more enemies.

Pegasus Knights and other fast fliers are perfect for filling the role of an avoid tank due to their lightweight nature. It can be risky since these fliers aren't as hardy as others, but if it pays off, you can get a real advantage over any upcoming mobs.

8 Give Canter Skill To Your Units 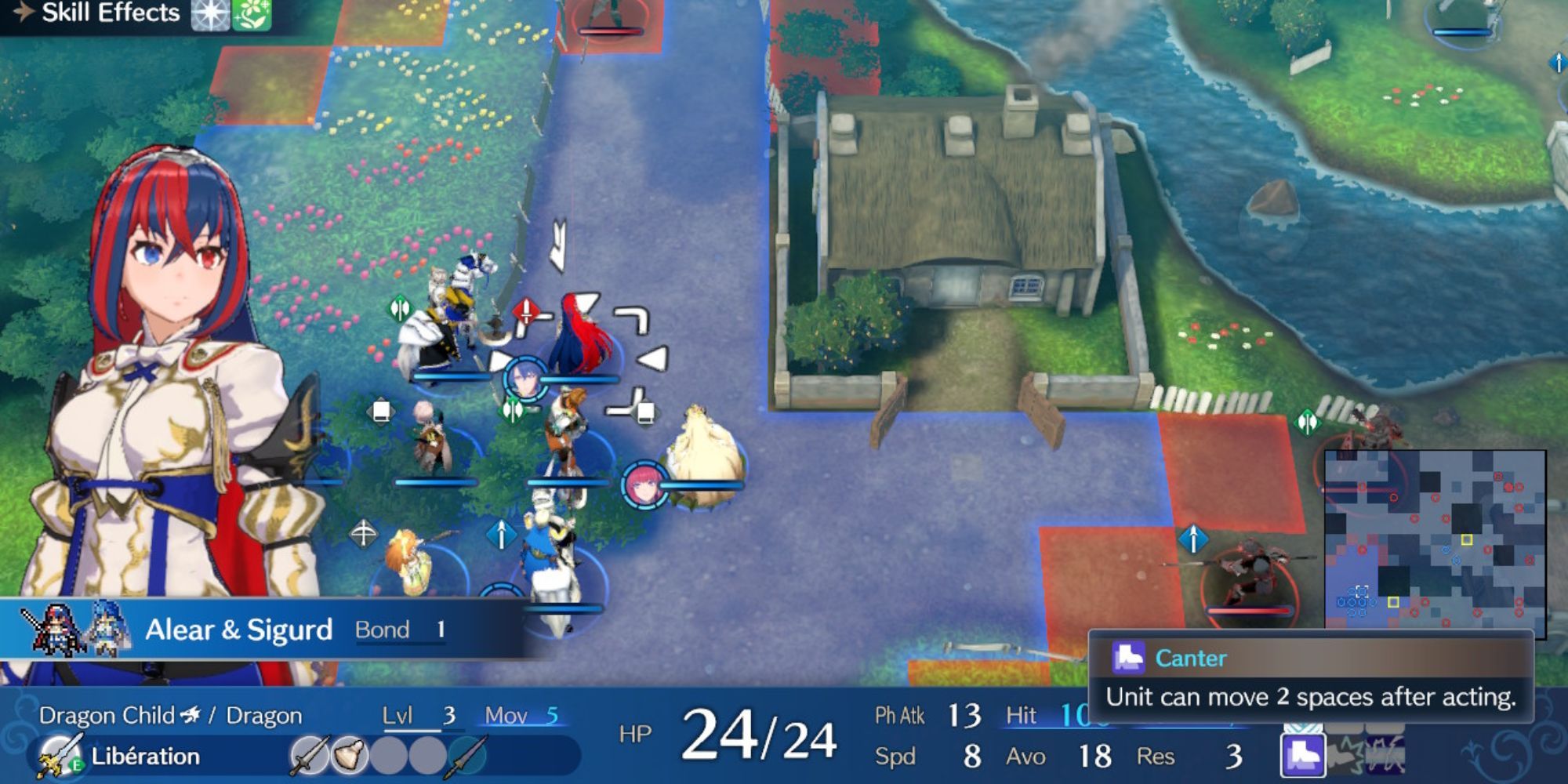 Leveling up your Bond with an Emblem by taking them into combat will let you access some of that Emblem's skills. Some of these are stat increases while others are more involved skills with a beneficial effect. Sigurd's Canter skill is one of the latter, as is Lyn's Alacrity.

Canter is downright incredible because it lets you move two spaces after an action. You can have this skill on any of your units, and you'll need 1,000 SP and Bond Rank five with Sigurd. Having several units able to be this maneuverable throughout the game will be endlessly beneficial, letting ranged units get out of dodge after attacking. 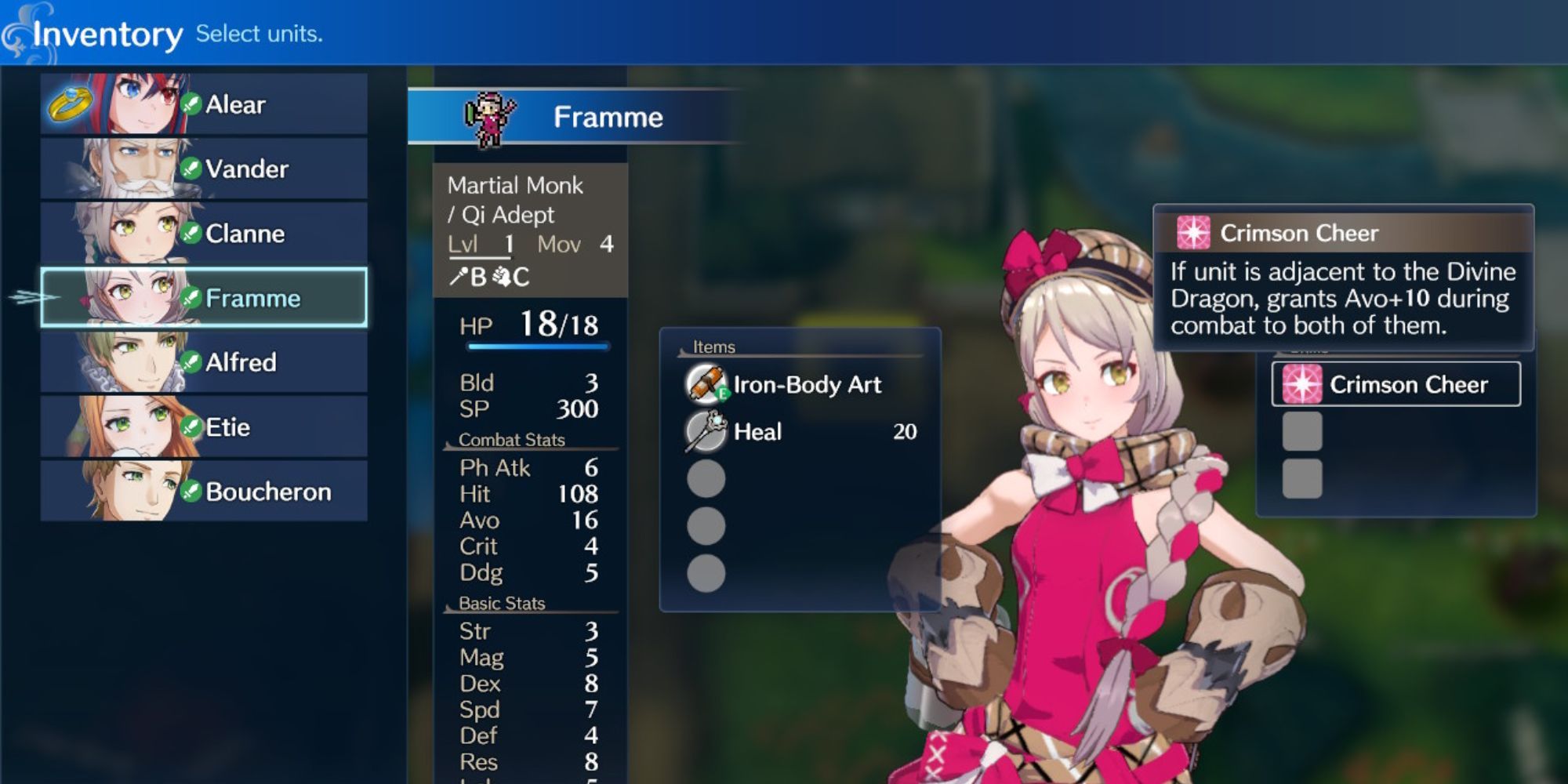 If you take the time to look through the personal skills of Vander, Framme, Alear, and Clanne, you'll realize that they all work and synergize together. All of the Lords and retainers you'll come across will have similar setups, but they all work together with adjacent allies. This emphasizes the importance of formations in Engage.

The game pushes you to effectively pay attention to where your allies are standing in relation to Alear and other units to either increase your damage, raise your avoidance, or increase the effect of healing items. It's crucial to keep this in mind when positioning your characters.

6 Being Aggressive When You Think You Should Play Defensive 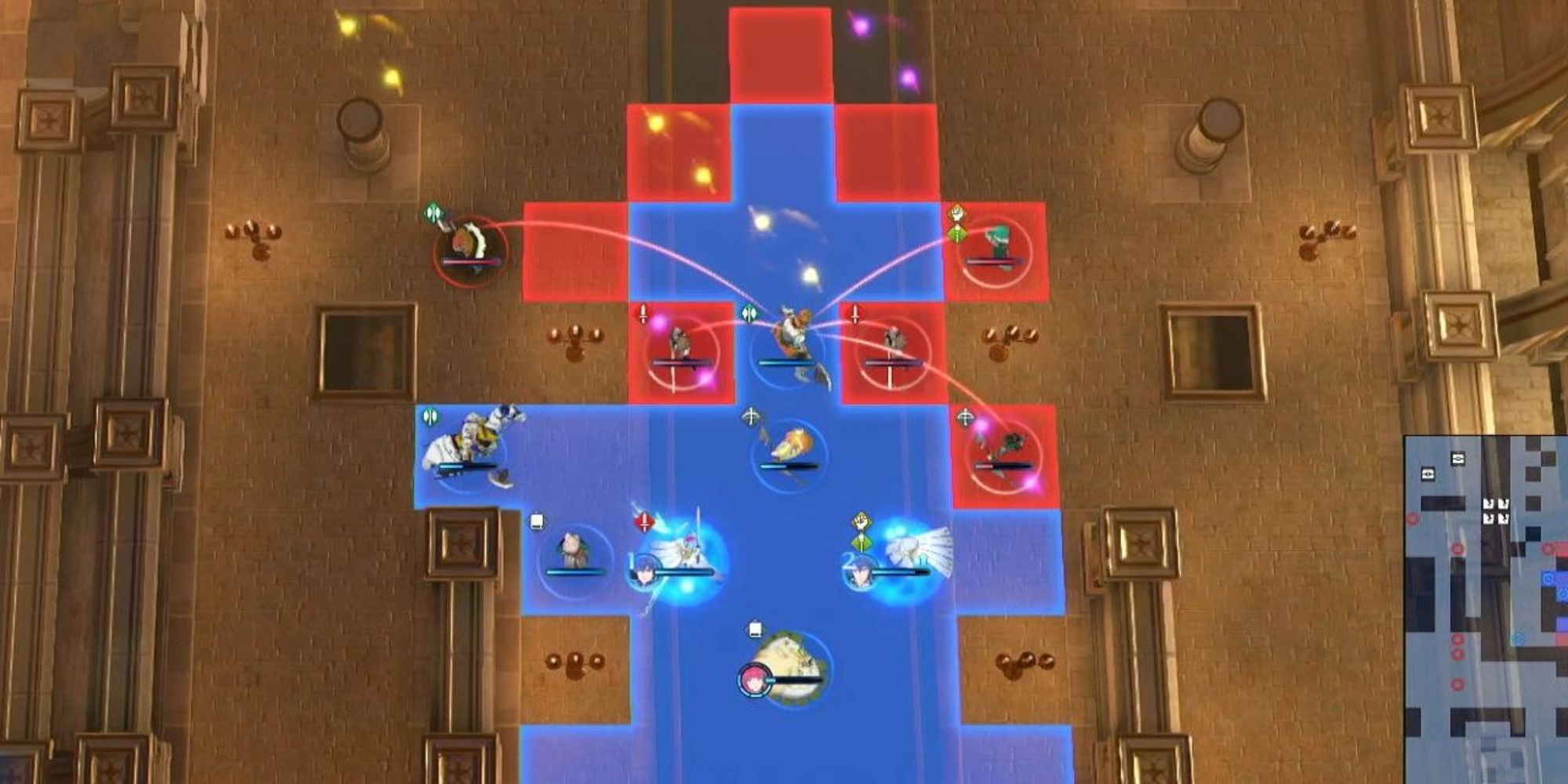 This is truer on harder difficulties. It depends on several factors in the battle, so it's up to you to assess which approach is best. However, when you see a large group of enemies, you might want to hunker down to try and take them out defensively. Because of the backup unit system in Engage, you're incentivized to be more aggressive.

You might get swarmed by multiple enemies, and they could block your movement and chain attack you into oblivion. Moving boldly forward to dispatch one or two enemies before they reach you, even if the unit you send will take damage, will help you manage their numbers better. 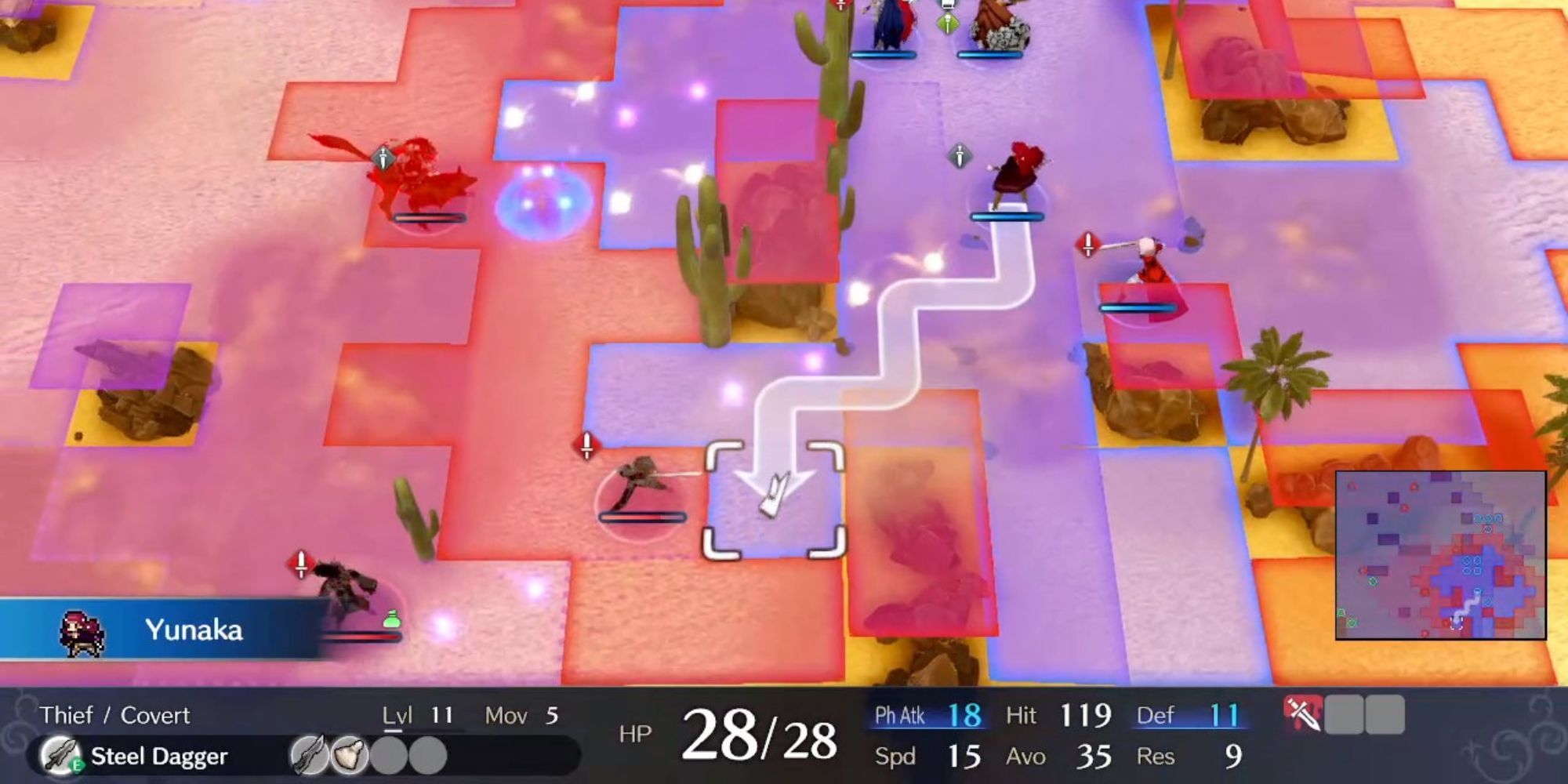 This is a staple move for challenging engagements in any Fire Emblem game and remains the same for Engage. If you're having trouble with enemies getting past your front-line characters and picking off your weaker units, you should consider using the enemy range indicator. Having this toggled on shows you where your enemy can reach, which means you can try to block their movements.

However, this could quickly become a hassle if you're not paying attention. It will become more frustrating than helpful if you've got units in poor positions that you can't move around because there are too many bodies in the way. If you're planning on creating a chokepoint, this is something to keep in mind.

4 Abuse The Somniel Arena To Get Emblem Skills 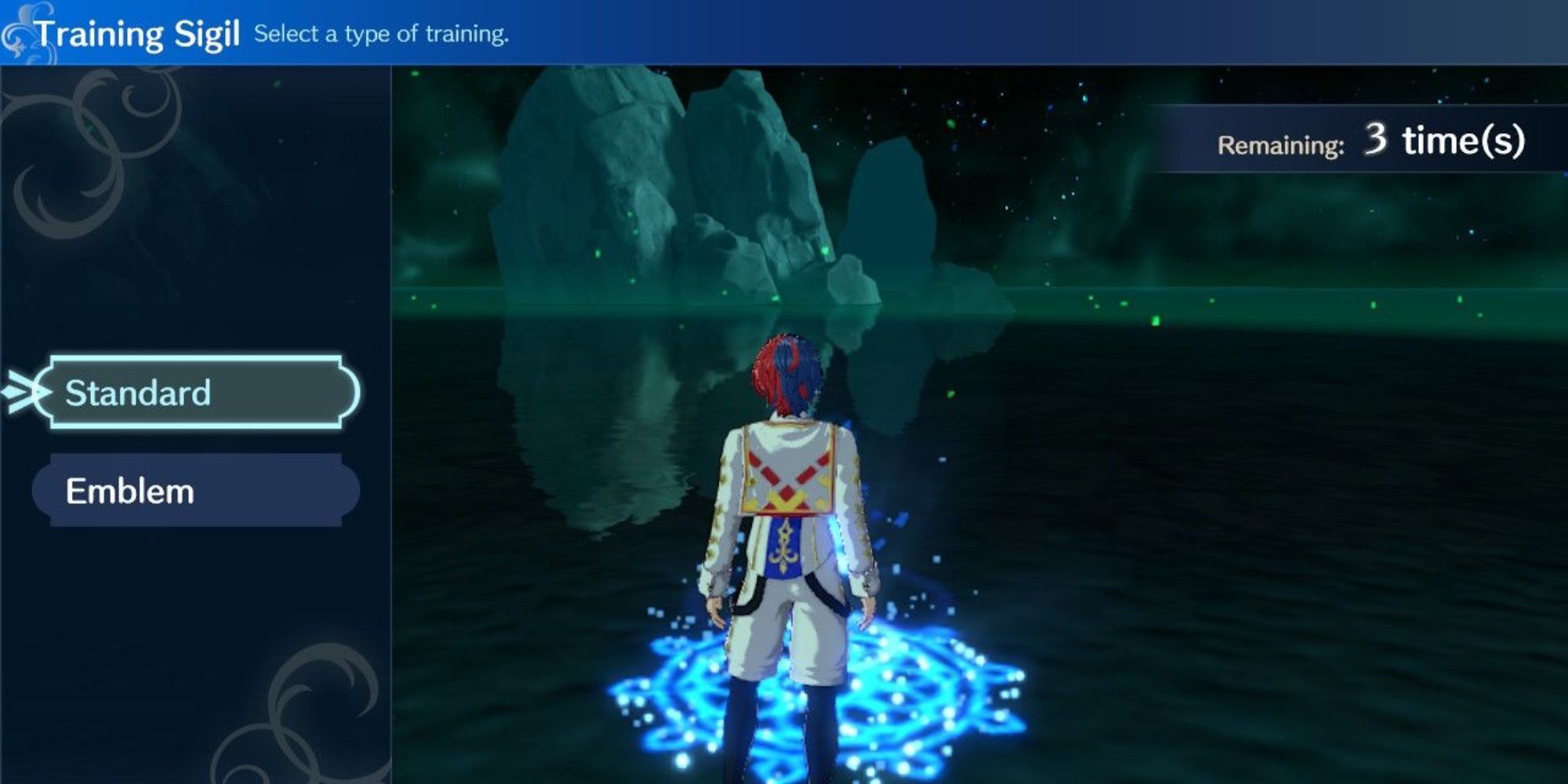 There are plenty of other uses for your Bond Fragments, but this is by far the most useful. Giving your allies skills without having to level the Bonds normally, or promote them to an advanced class, will save you time and stress. Bear in mind you should keep Bond Fragments leftover, just in case you want to Engrave a weapon. 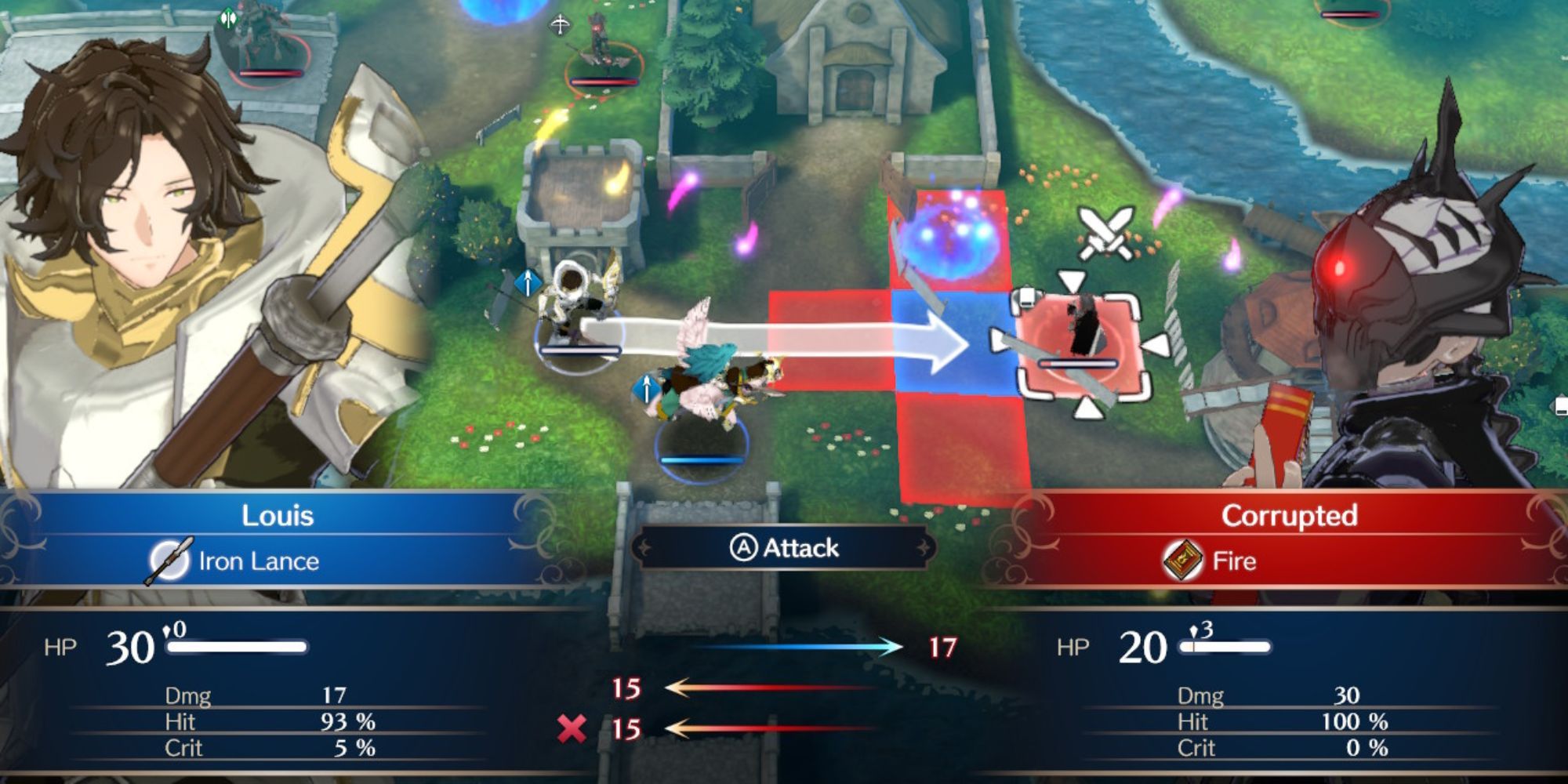 If you see you're going to get doubled by them, change your weapon to see if it makes a difference. Lighter weapons don't reduce your speed as much, which means you might mitigate the attack to just one hit. Pick this weapon as your main equipped one, and wait. The enemy will come to you then you can deal with the aftermath. This is often the difference between life and death in Fire Emblem.

2 Make Sure Backup Units Have Ranged Weapons On Them 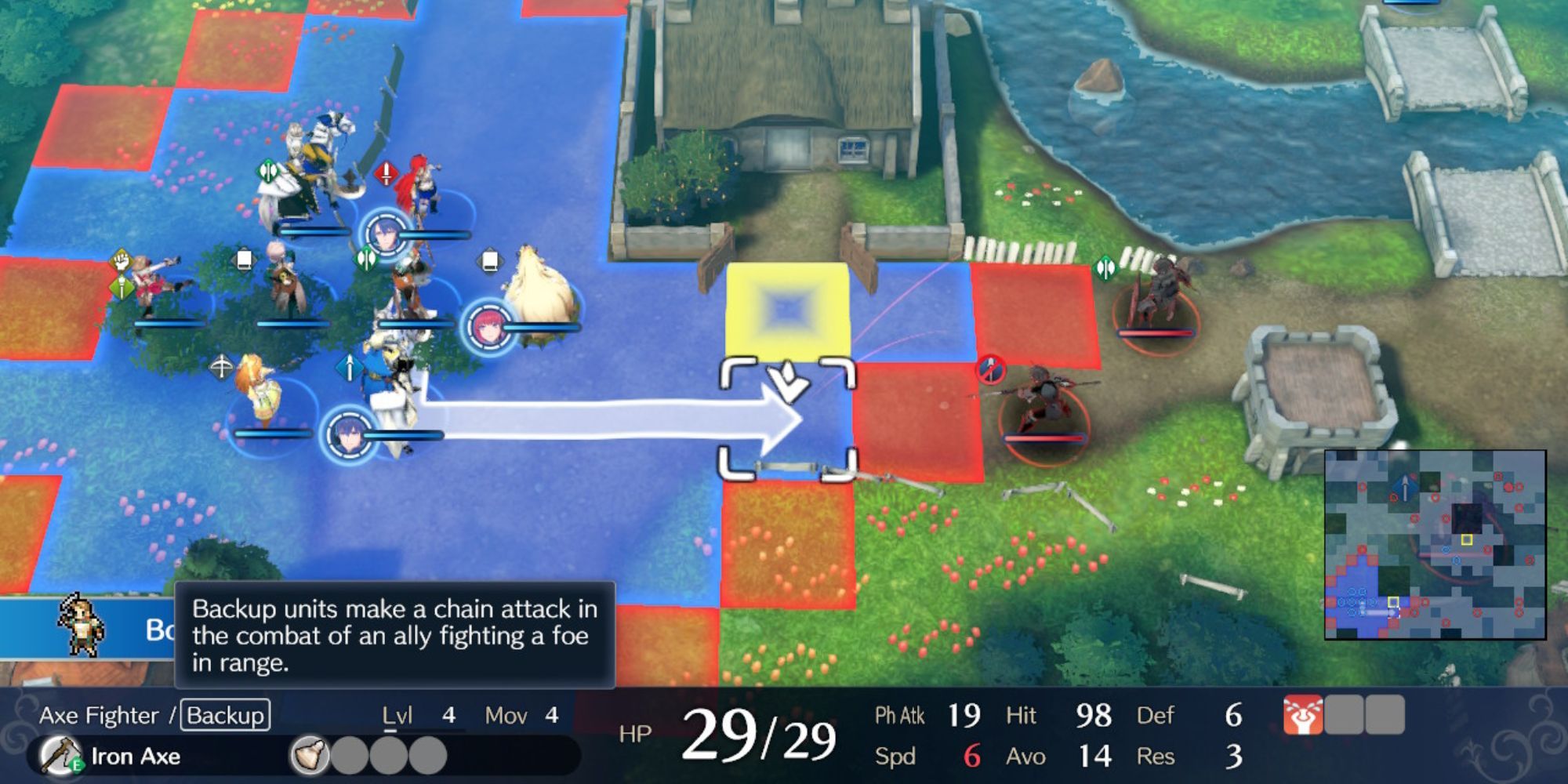 Backup units are designators in Fire Emblem Engage, similar to how Alear is a Dragon type while Framme and Jean are Qi Adepts. This means they have unique properties in combat, and backup units can jump into fights when another unit initiate's an attack.

If the backup unit is in combat range, they will attack for minor damage first in a Chain Attack. Giving your backup units a weapon with ranged capabilities, such as a Levin Sword or a Hand Axe, will mean they can Chain Attack from safety. 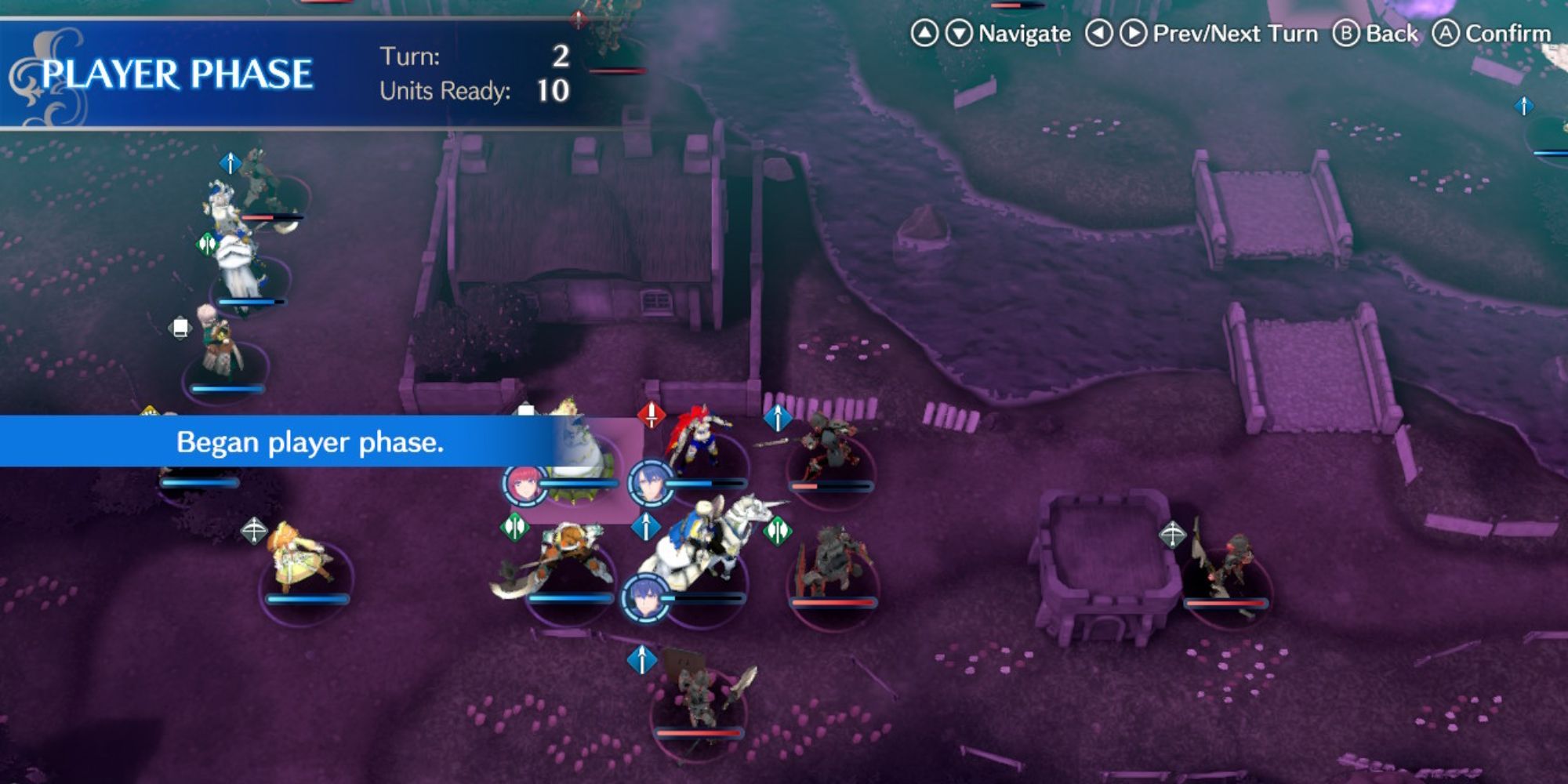 This might sound obvious or confusing but bear with us. Let's say you've been hit by a critical strike you weren't expecting. You can trick the game into stopping this action if you rewind. This strategy has been available since Fire Emblem: Echoes – Shadows of Valentia, as it was the first mainline Fire Emblem game to give you a turn reversal item.

For this to work, don't rewind and let it play out again the same way, because this critical hit will always happen if the next combat that ensues is between the enemy and the unit being hit by the crit. Have another unit attack the enemy, preferably from range. This will throw the AI off, and that critical hit shouldn't happen now.