Star Wars: The Force Unleashed is a brutal game. We don't mean difficulty-wise, although that's no reason to let your guard down – there are some tough scrapes. The brutality comes from the audiovisual side. Few Star Wars projects have ever gone so hard into the realm of violence. The game still slides by without the need for a 'Mature' rating from the ESRB, but let's just say if you're coming in hot from something like LEGO Star Wars: The Skywalker Saga, expect some serious tonal whiplash.

There's a lot to take in here when you're not ogling the ruthless carnage Starkiller leaves in his wake. Certainly enough to check a guide like ours before delving into his bleak journey. Let's get you as primed as possible, apprentice. 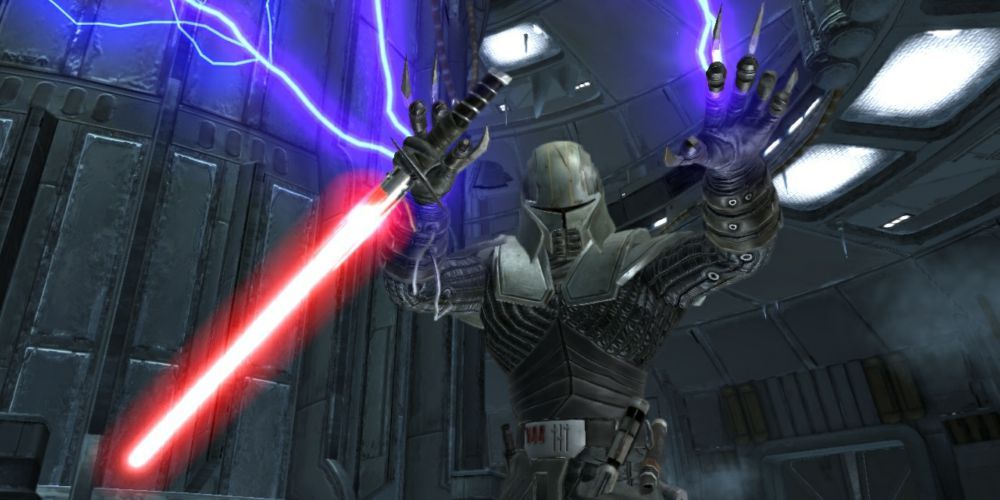 Sure, it may sound obvious. "This is a Star Wars game. Why would I not seize every opportunity to upgrade my awesome laser sword?" Believe it or not, it's a common conundrum for new players of The Force Unleashed. Here's why.

The rest of the game's upgrade systems are related to Force powers. You know, the fancy magic with the hand-waving and the floating bad guys. Pushing and pulling things from afar. Chaining lightning upon multiple helpless foes. It's easy to get sucked into that and forget how important it is to improve the damage that your lightsaber inflicts. In later stages, you won't always be able to rely on your Force powers to save you wherever your blade comes up short. You'll need to deal real pain at close range. 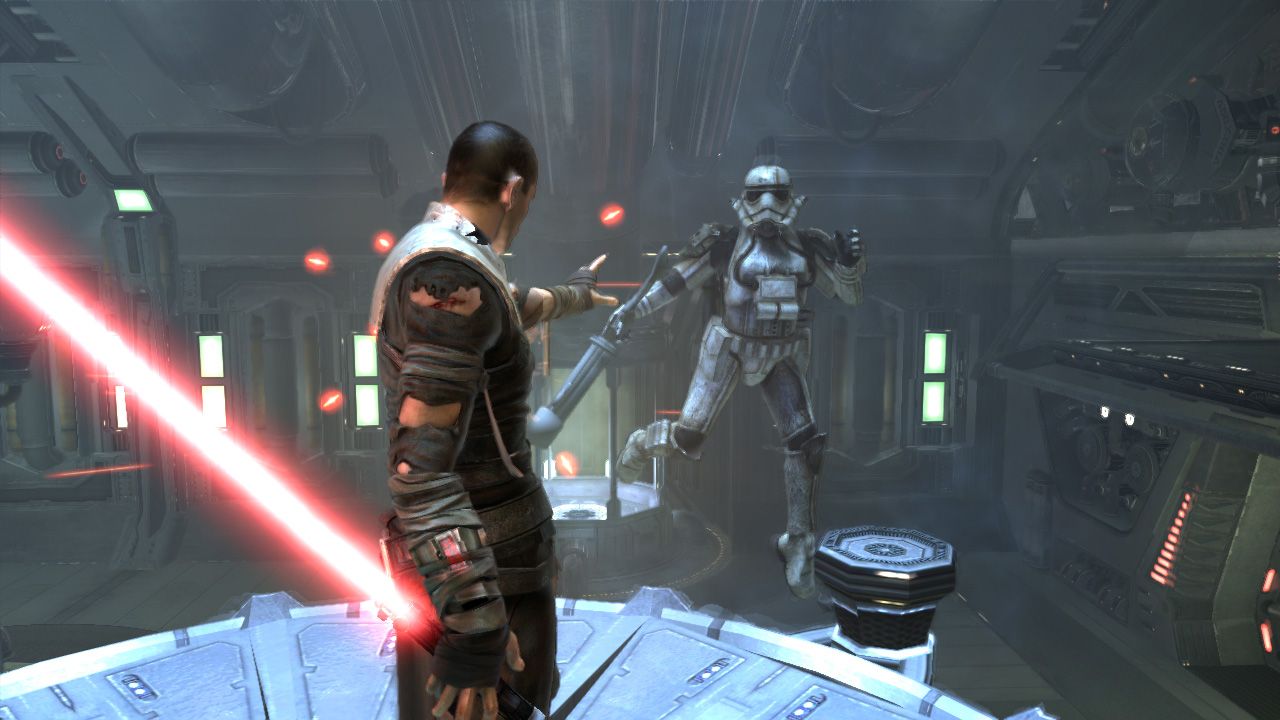 Star Wars: The Force Unleashed is a game best played quickly. Standing around in one spot for long is often fatal. The waves of enemies chasing Starkiller around each room give missions a brisk pace that should be respected, not rejected.

It's best to stay mobile until everything that can kill you has been neutralized. You should pepper in quick bursts of offensive might as you move. Consider investing in combos like Sith Slash, Saber Swing, and even Aerial Ambush. Galen Marek – should we dare to utter his birth name – has rivals around every corner, so keep it in mind while you're playing, and you'll be in good shape to eliminate them. 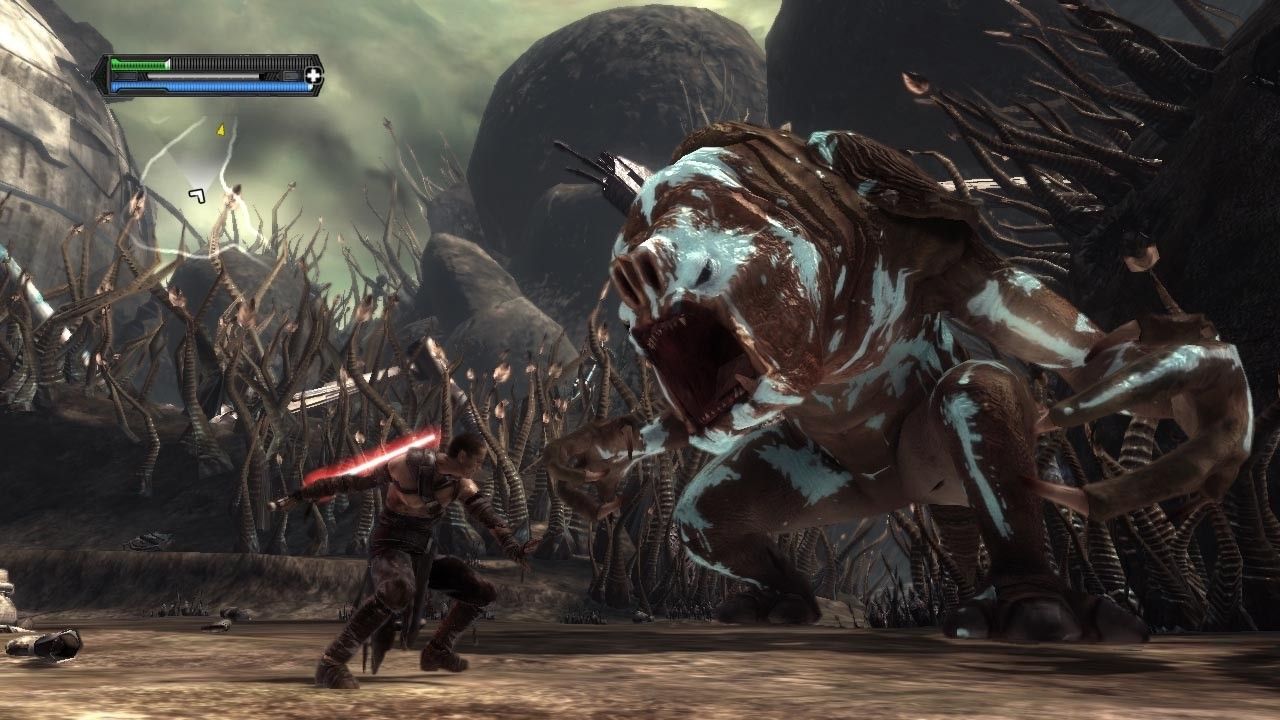 Around the turn of the 2000s and into the early 2010s, virtually every major publisher made certain that their developers packaged QTEs (Quick Time Events) into their action games. The gameplay mechanic was all the rage until a few years passed, and those publishers got the message: not everyone's in love with them.

If you're unfamiliar with the term, think of a time when a video game has displayed a certain button prompt on the screen and given you a relatively brief window of opportunity to press it. Successfully doing so is good. Failure to do so is bad. It's pretty straightforward stuff – and Star Wars: The Force Unleashed, having launched way back in 2008, incorporates it liberally.

When the prompts occur against run-of-the-mill baddies, don't worry much about it. You can skip past the "kill cam" animations and just play normally. Boss fights are a different matter. When you've got a boss down to about a tenth of their health bar, one of these flashy QTEs pops up. Should you falter, they'll regain some of that lost health, and it'll trigger again once it's been lowered. In fact, the battles won't end until you pull it off properly, so be ready to tap buttons as the game commands. 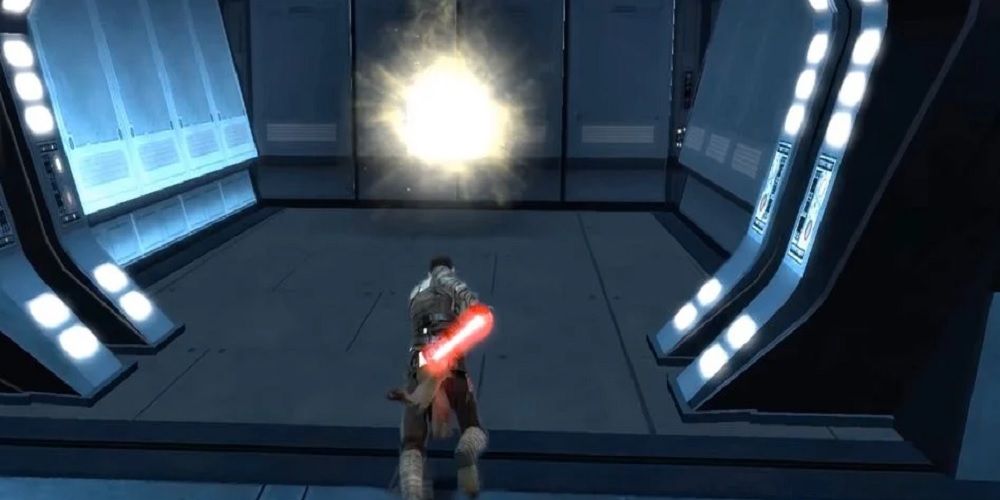 As you progress through a level, you'll no doubt come across Holocrons. These come in two flavors (figure of speech; don't try to eat them), Jedi and Sith. Jedi Holocrons are white; Sith Holocrons are red. Not exactly a subversive color scheme.

We'll tackle Sith Holocrons first. They're temporary power boosts. If you've ever seen Sonic the Hedgehog jump up and land on a TV-like device that imbues him with a shield, you're on the right track here. The damage Starkiller deals may be heightened, or he'll become altogether impervious to attacks, or something else along those lines. They're all on a timer, so take full advantage of them and time the pick-up for maximum usage.

Jedi Holocrons are, frankly, more interesting fare. Some provide huge sums of leveling points. Others grant ability points or even crystals to recolor your lightsaber. New costumes can also be acquired through them. Jedi Holocrons are like a one-stop free-of-charge shop for all your bonus needs.

Against Bosses, Force Repulse Is Your Best Friend 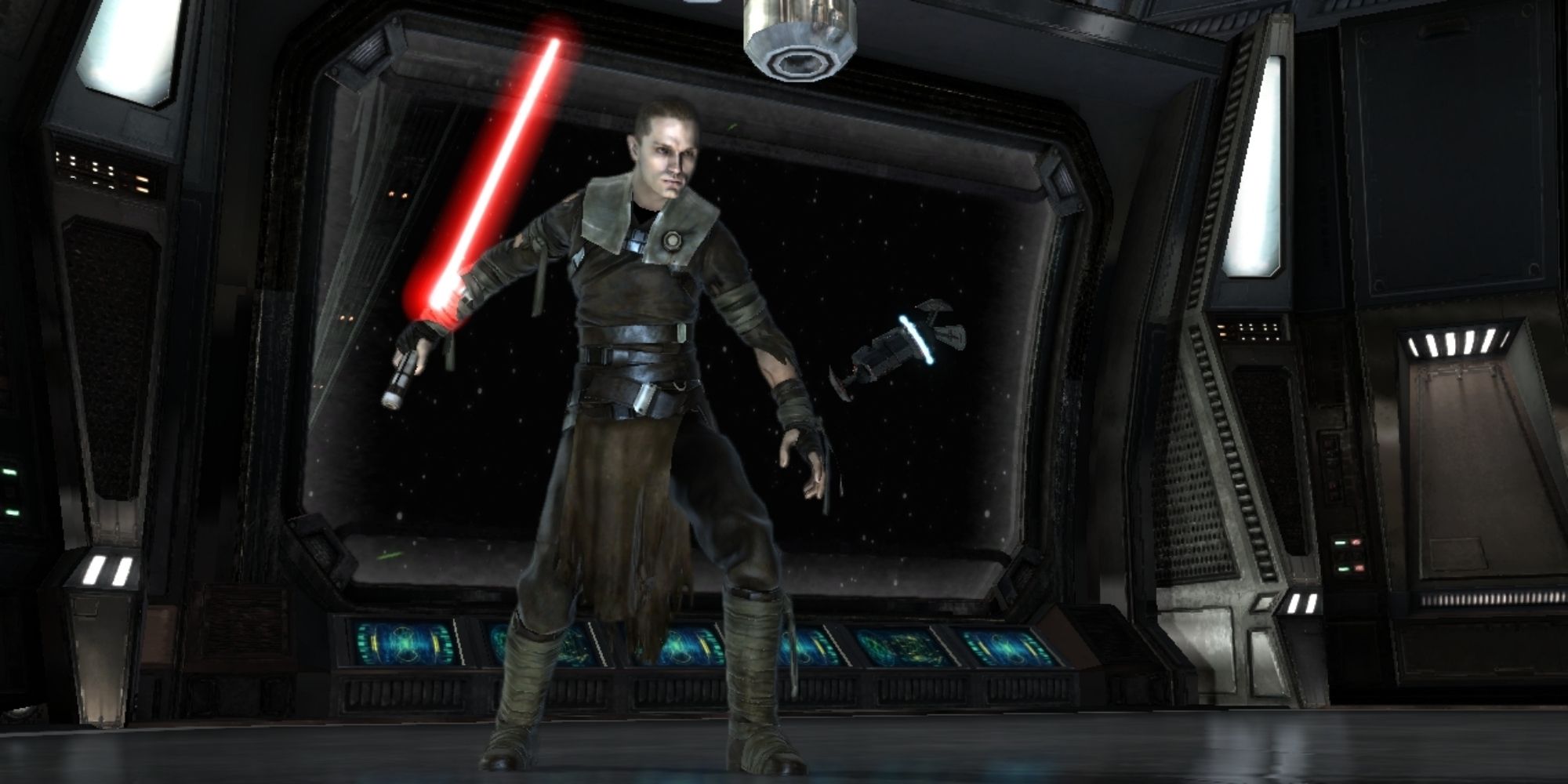 Here's a fast one for you. When you're engaged in combat against especially tough opponents, including most bosses, it's a good idea to get up close and personal with them and then fire off a Force Repulse when they attack. Amazingly, this messes up most of your enemies pretty majorly. Whatever it was they were doing before Starkiller went and busted their groove, they'll have to go back to square one with it, and in the meantime, you've removed their ability to chop up your HP for several seconds. Good trade. 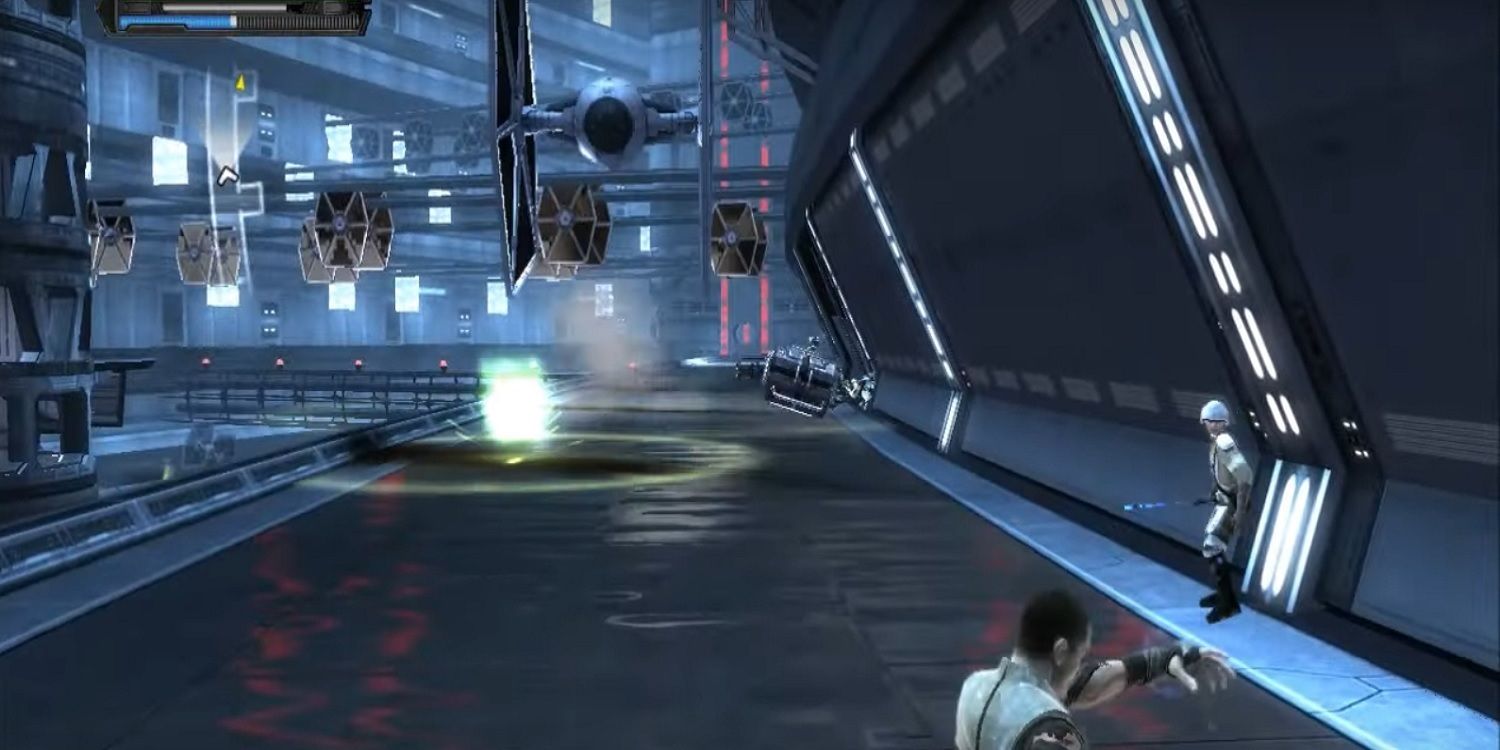 The thought of chain lightning drawn forth from one's fingertips and hoisted at an enemy most commonly conjures up images of Ian McDiarmid's nefarious Emperor Palpatine. But two can play this game. Starkiller is Darth Vader's apprentice, after all, and investing some points in his own electrical theatrics is a good idea.

Not only will this work out quite nicely against mechanized soldiers and droids, but it's also the secret recipe to sending TIE Fighters crashing down into satisfying explosions. Say what you will about The Rise of Skywalker, but that movie only reinforced what veterans of The Force Unleashed and their Pokemon trainer cohorts already knew – if it flies, zap it.