I’m 12 hours into Persona 5 Royal and, for the first time since its initial launch in 2016, I have no intentions of bouncing off the monolithic JRPG. Despite owning roughly five copies of the game for several platforms, I’ve never had the motivation to push through its lengthy runtime, even as all my friends and colleagues sing its praises. I adore the characters, world, social commentary, mechanics, aesthetic, and basically everything it’s going for, and growing up with the genre you’d think its defining installment would take hold of me and never let go.

Fun fact: My first job in this industry refused to let me review Persona 5 as a young writer fresh out of university because as a critic, “I wasn’t ready for it”. I totally was, and maybe I’m still bitter about this exclusion, since I put off playing the game for over half a decade. That all changes in 2023, especially now I’m deep into Madarame’s palace and ready to take Tokyo by storm as a rebellious Phantom Thief. Or TheGamers as I’ve called them, my rebellious cast of millennials ready to bring corrupt adults to justice while attending after school clubs and flirting with their potential sweethearts. I know it’s wrong, but I’m chatting up the teacher.

I grew up with the Persona series, and would happily call myself a hipster who was deep into the Atlus goldmine long before it was considered cool. My first game in the wider series was Digital Devil Saga for the PlayStation 2, a much darker and more introspective tale filled with teenage angst and self-inflicted gunshot wounds to summon ethereal creatures beyond the mortal coil. It was an excellent, punishing, and uncompromising experience that, along with several others, would come to define the modern Persona phenomenon we’ve all come to know. Fans remain convinced that Persona 5 invented jazz music and the colour red, but the well runs so much deeper. As a consequence, committing myself to it feels like fate, like I’m making up for lost time and kicking myself for ignoring it. Believe the hype, it’s amazing. 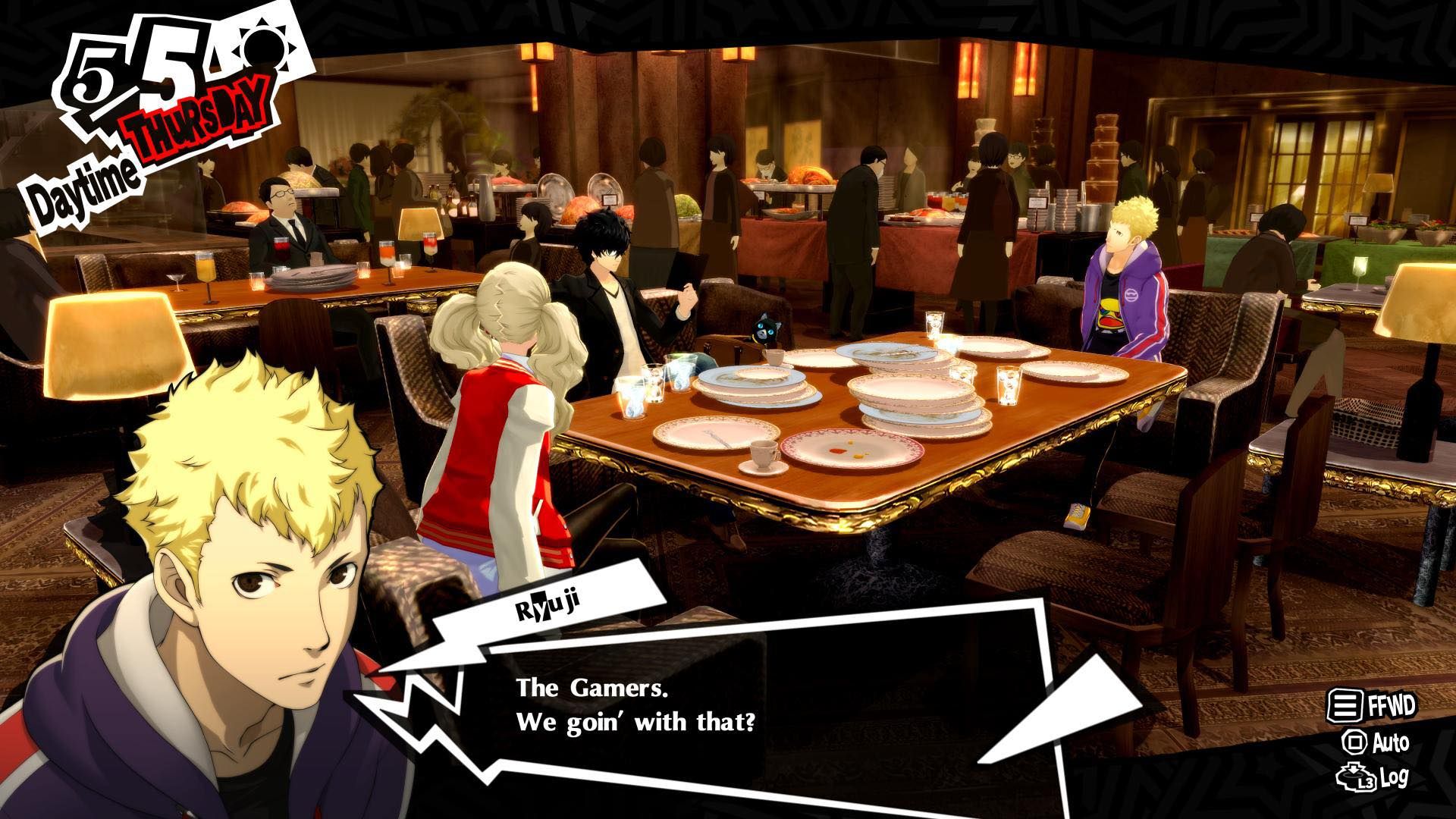 Persona 5 has become a cultural phenomenon, an icon of the medium that has outgrown its cult origins and evolved into something more. That much was obvious when I started sharing my current playthrough on Twitter, with countless people asking about my team composition, potential romance options, and if it was my first time with the game. I guess it mostly is, even if I’ve consumed fanfiction and knowledge of its overall stream of content through eventual osmosis. I know so much about Makoto, Futaba, Haru, Yusuke, Akechi, and the rest of the cast, but as I play I realise how little about their characters I actually understand – their inner stories remain a mystery I’m determined to uncover.

The writing presents a disregard for female empowerment that the series has struggled to shake for years, and many of its tutorials are too long and needlessly pedantic, but once you get into the groove of cruising through Mementos and nurturing Social Links, there is nothing else quite like it. Reaching the end will take me hundreds of hours, yet I find myself sinking into the routine so obediently that that investment already feels worthwhile. Each passing day has meaning, even if all I’m doing is cramming notes in a local diner or cleaning the coffee shop for my grumpy guardian. Joker is a good boy in my eyes, and always will be. 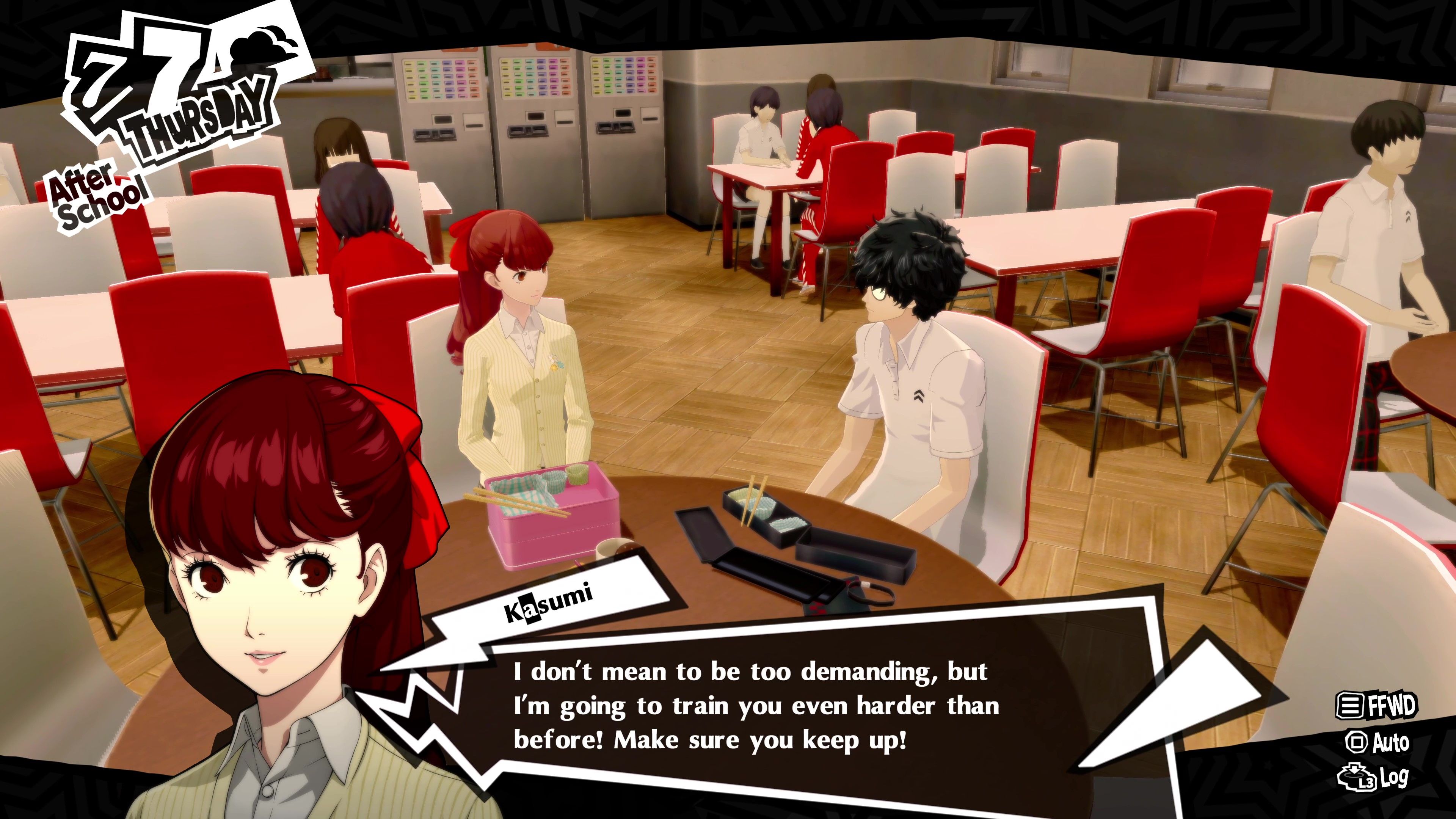 Anime archetypes are brought to life through stellar voice acting and empathetic writing that illustrates the plight of young people growing up in a Japanese society where standing out is frowned upon, and the only path forward is to deconstruct such ingrained biases for a new generation. Atlus trips over itself in a few ways that I hope the eventual sequel is able to remedy, often contradicting its own rebellious stance on authority by failing to embrace more diverse perspectives and inclusive identities, settling on a heteronormative vision of youthful understanding that is far more out of touch than it intends to be. This progress comes with time though, and what we have here remains far better than anything else the genre has to offer. At least I can hope that the remaining 90+ hours will prove me completely wrong.