If you used a PC in the late '90s or early 2000s, it probably had Winamp on it. This customisable, skinnable desktop music player was enormously popular at the turn of the millennium—to the point where AOL bought it for $80 million. That might seem like a trivial amount compared to Elon Musk's recent $44 billion Twitter buyout, but in 2001 this was a major acquisition. If you downloaded a illegally distributed mp3 of Chop Suey by System of a Down from Napster, chances are you used a copy of Winamp to play it.

A big part of Winamp's appeal and runaway success was being able to change its appearance by downloading and installing user-made skins. Its developer, Llamasoft, enthusiastically encouraged this, releasing documentation to help people do it properly. Soon the internet was flooded with skins—including many based on popular games, bands, movies, and TV shows from the era. Whether you loved The X-Files, Final Fantasy 8, The Matrix, or Limp Bizkit, your Winamp player could reflect your passion. It was always on your Windows desktop, and music was always playing, so you wanted it to look as cool as possible. 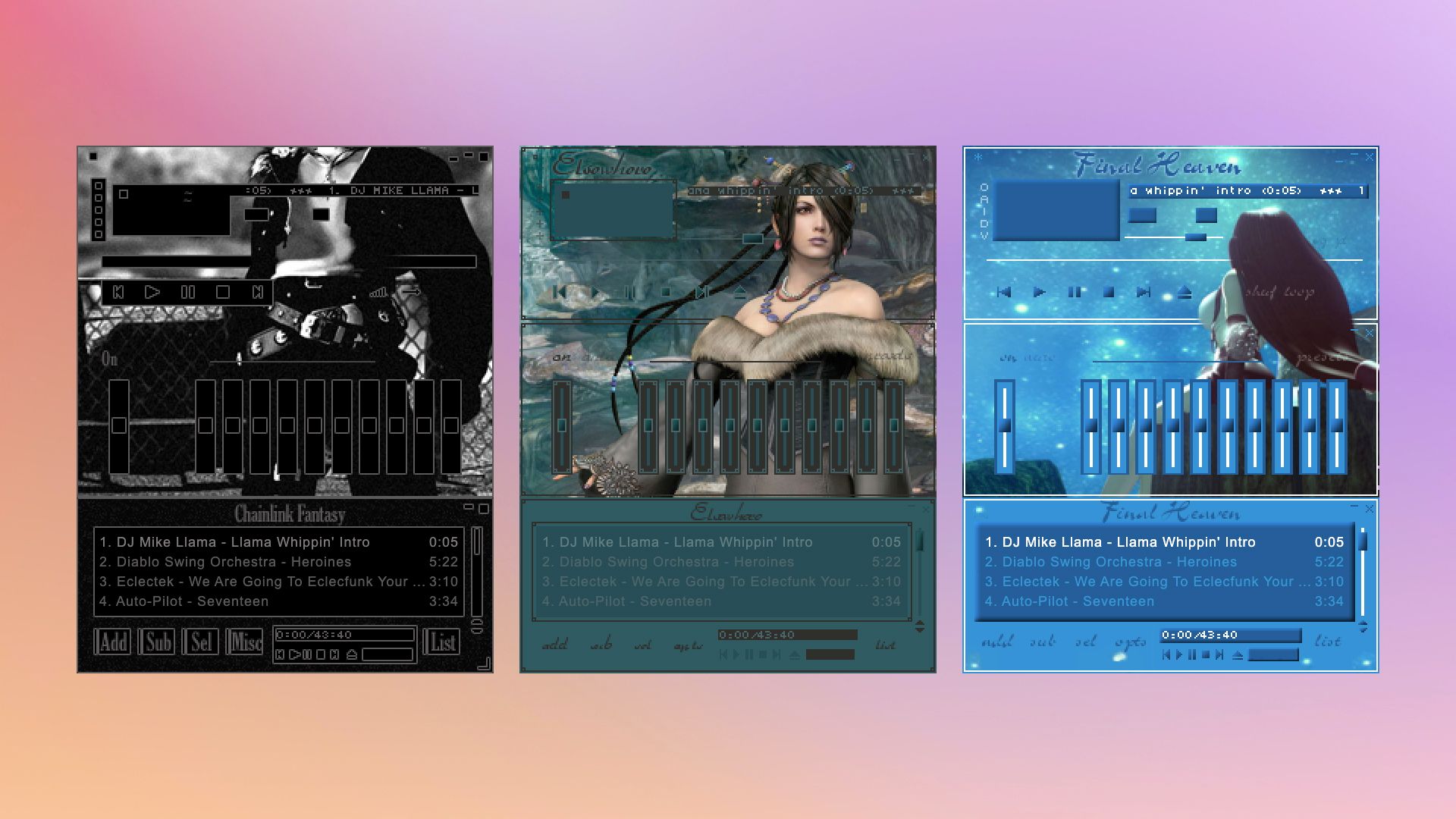 These skins might have been lost in time, like tears in rain, if it wasn't for the heroic efforts of a programmer named Jordan Eldredge. He built the Winamp Skin Museum, a searchable archive of thousands of skins—even including their readme files, some of which are pretty amusing. In a note attached to a corny Final Fantasy 8 skin featuring Squall and Rinoa in a romantic embrace, the creator says they hate the game and its art style. They just made it because someone asked them to. This collection isn't just fun to look at it: it's an important piece of internet archiving too, and fascinating snapshot of a moment in time. 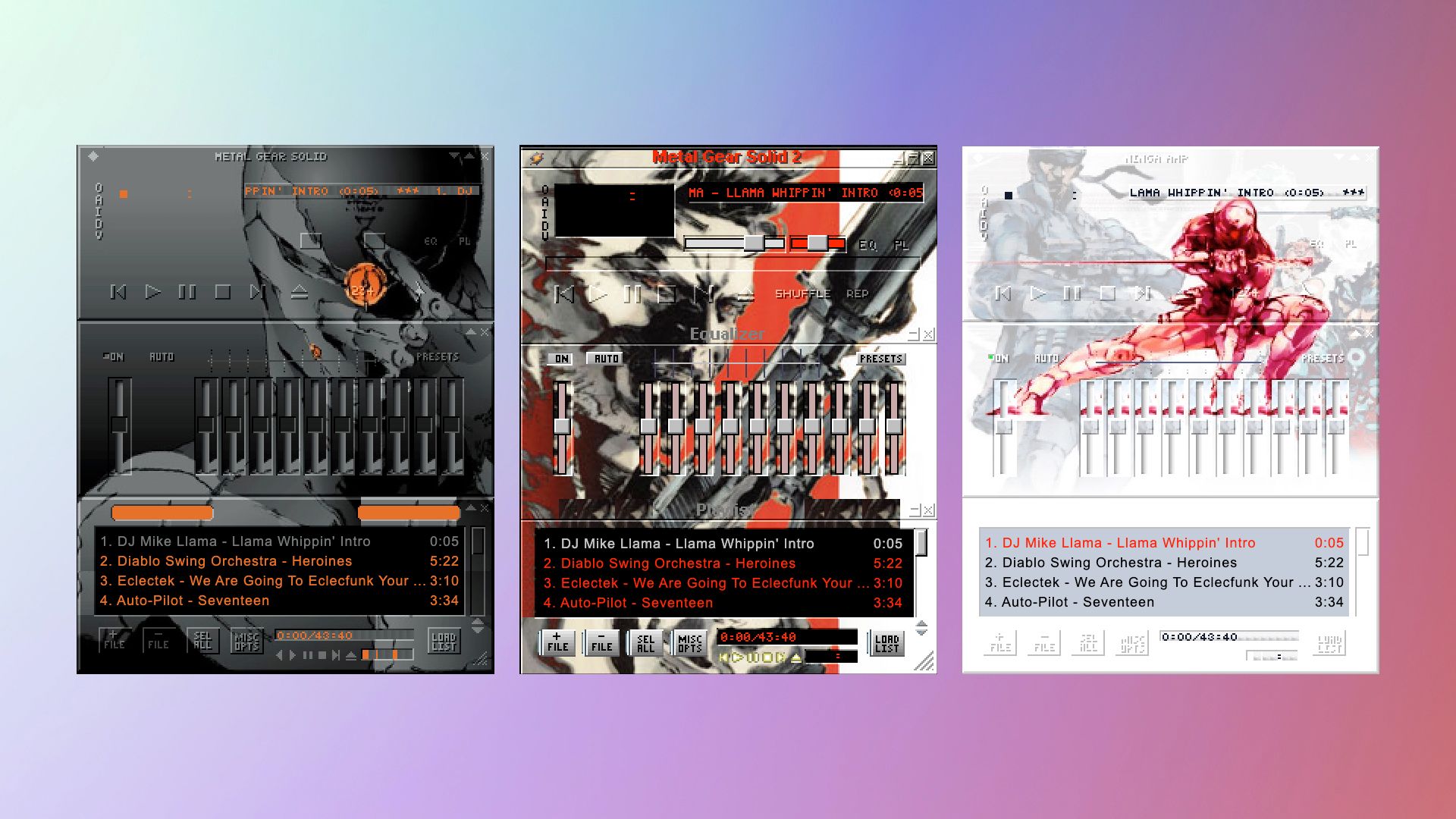 There's a surprising amount of digital archaeology you can do with this impressively curated selection of skins. Not only to they tell us what pop culture people connected with in the early 2000s, but they capture the period's distinctive graphic design trends too. There's no mistaking the decades these skins were originally created in. 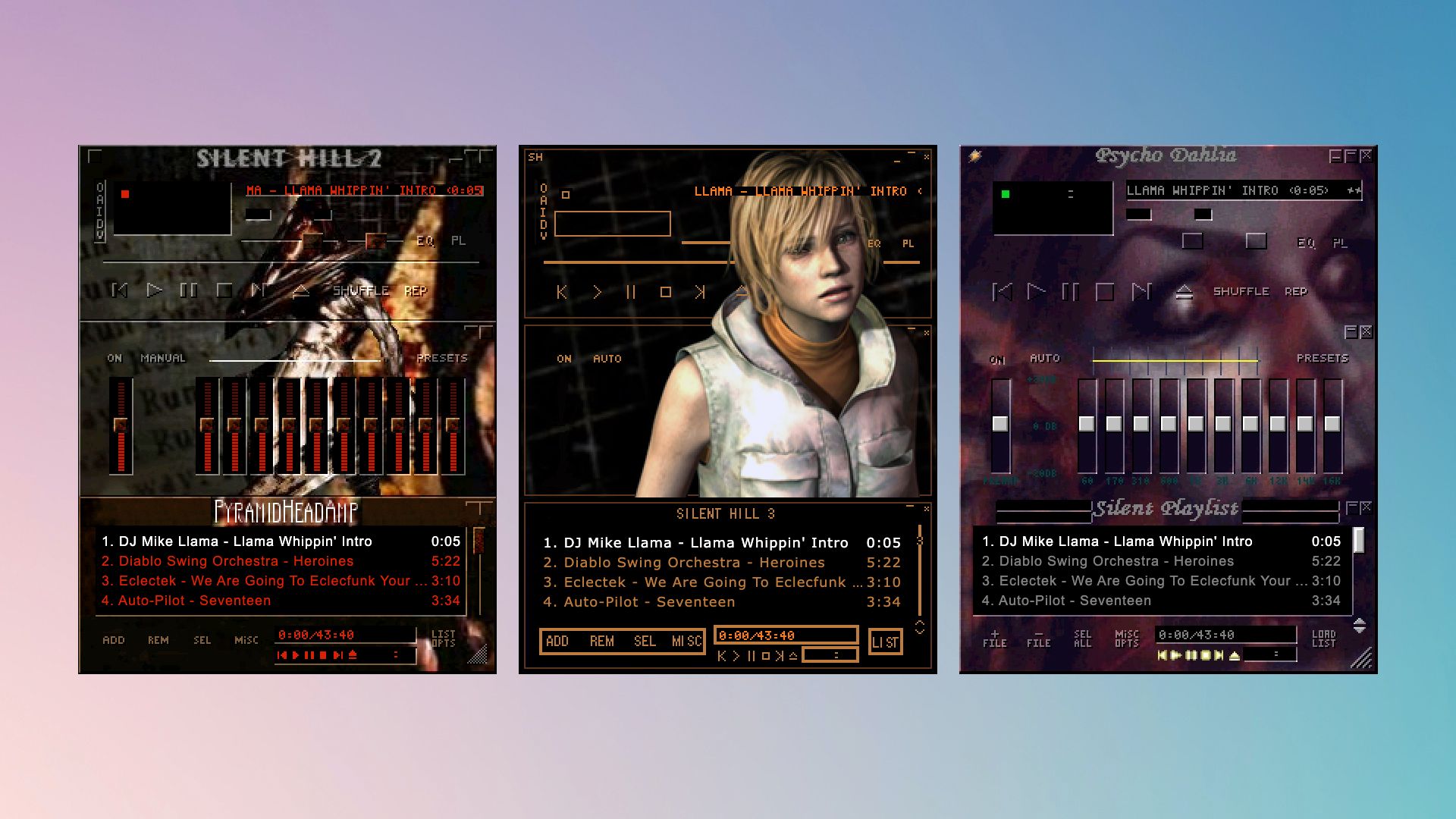 And let's be real: for those of us who are a certain age, it's incredibly nostalgic too. I remember when my Winamp player was a constant fixture on my desktop, playing Nobuo Uematsu's Final Fantasy 8 soundtrack, SCIENCE by Incubus, and a bootleg Jackass soundtrack I found in some dark corner of the web. Looking at these skins instantly takes me back. 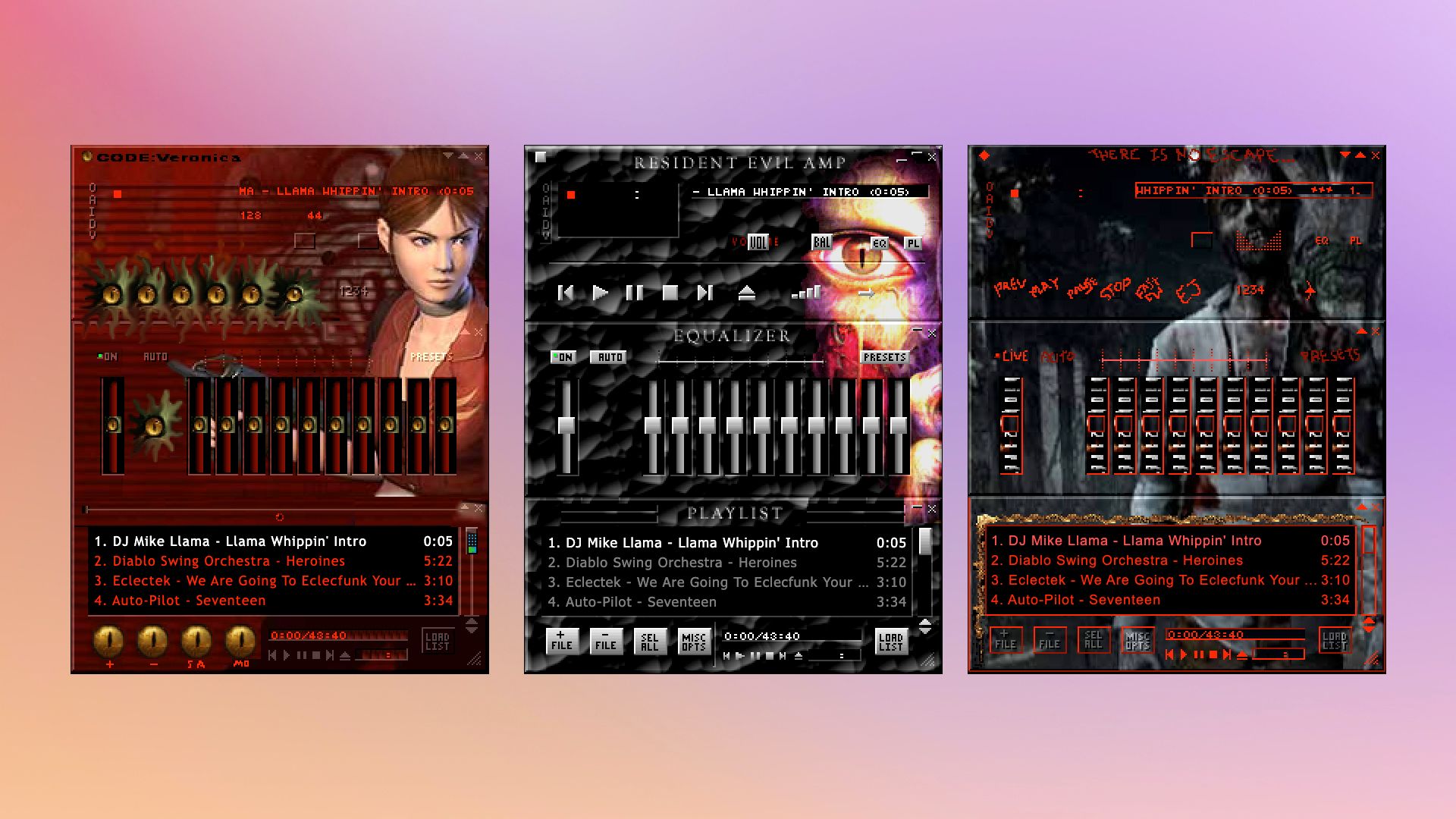 By far the most popular thing people paid tribute to with Winamp skins was The Matrix. Type it into the Winamp Skin Museum's search bar and you see an endless ocean of skins with the code rain, Neo, Trinity, Agent Smith, and a whole lot of green. This makes sense, because The Matrix was by, for, and about internet people. Admit it: you had the screensaver. 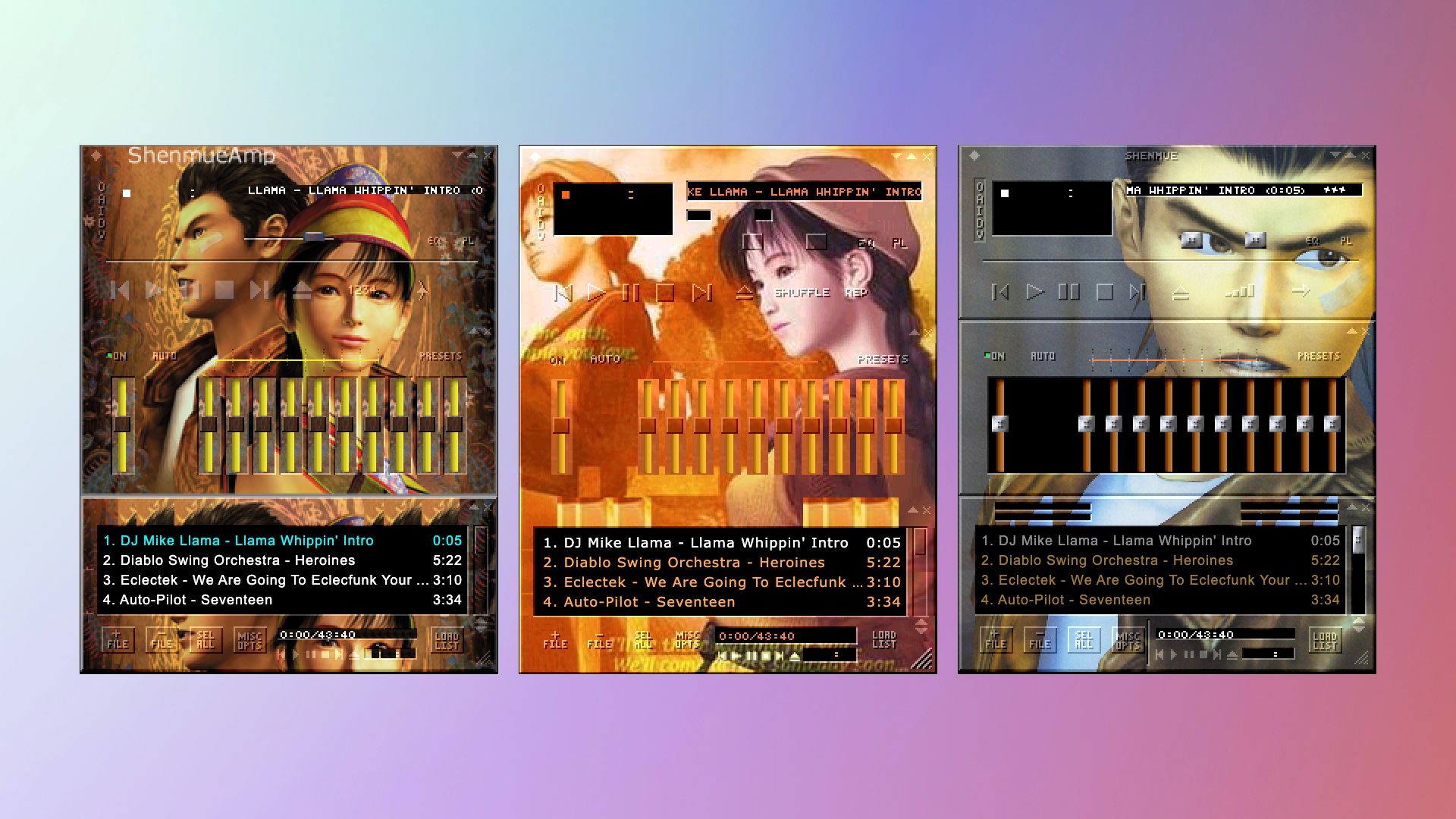 Between projects like this, Oocities (a GeoCities archive), and the incredible, tireless work done by the folks at the Internet Archive, I'm glad the history of the early-ish internet is being preserved for future generations. These Winamp skins are fun to browse and amusingly old school, but they have historical value too. 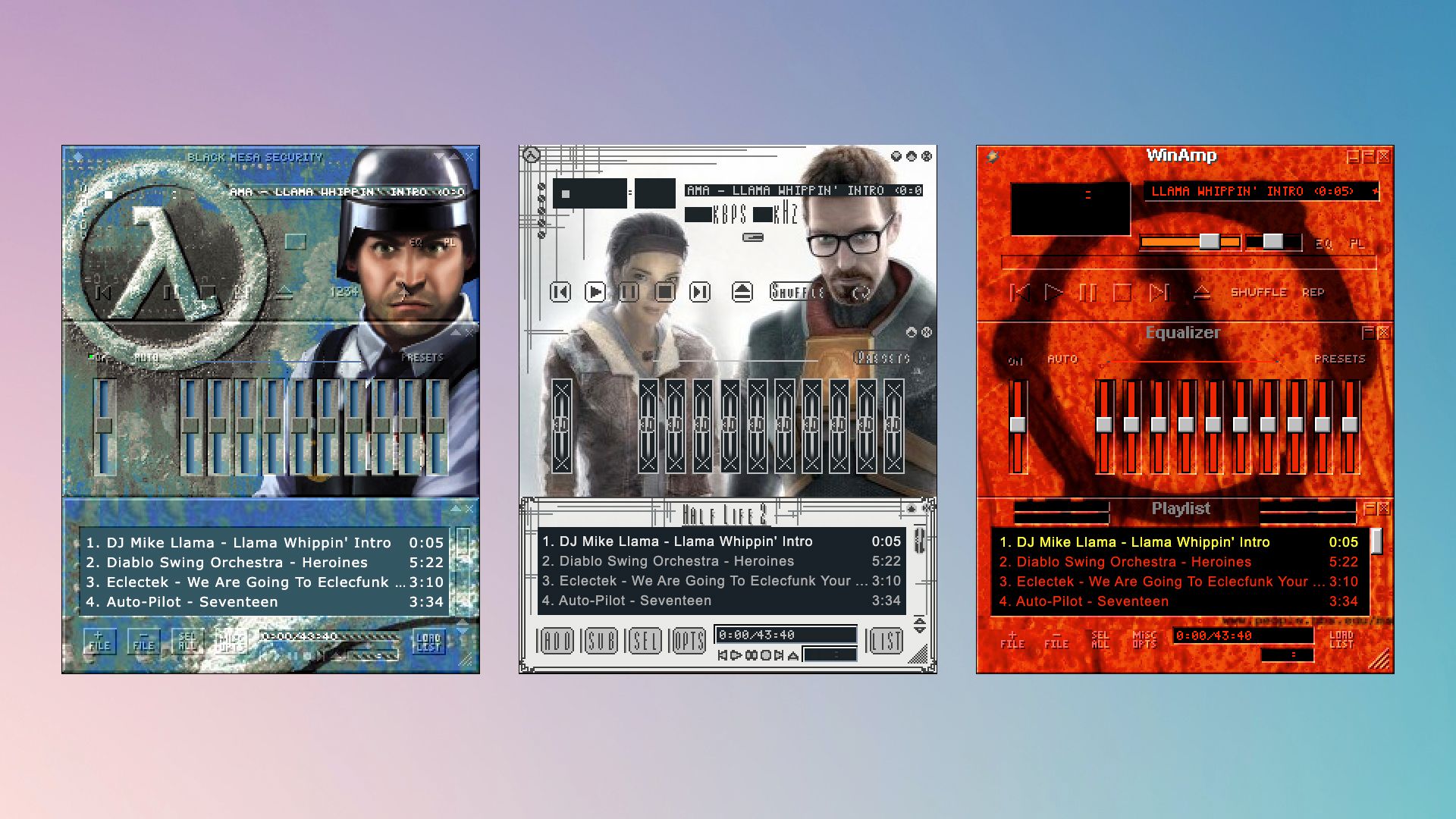 Computers used to be fun, didn't they? I'm looking at my Mac desktop now and everything looks exactly how the developers want it to look. There's no edge, no personality, no chaos. Winamp wasn't just software: it was a way for you to express yourself, fly your colours, and represent the things you loved.