There are two primary appeals to the original Tony Hawk's Pro Skater games: the skaters who you play as, and the locales you can take them to. Part of the fun of skateboarding is its inherent adaptability. As long as there's a flat surface to ride on, a few sidewalks to grind along, and the occasional curved piece of architecture, you can skate pretty much anywhere.

The first two Tony Hawk games offered a zesty mix of proper skate parks and more open-ended areas to get creative with your extreme sports. Pretty much all of these levels are fun in their own right, but some are objectively cooler than others due to their natural skateability, aesthetics, or the good ol' nostalgia factor. Why not revisit them in Tony Hawk's Pro Skater 1 + 2?

10 The Hangar – A Great Starting Point 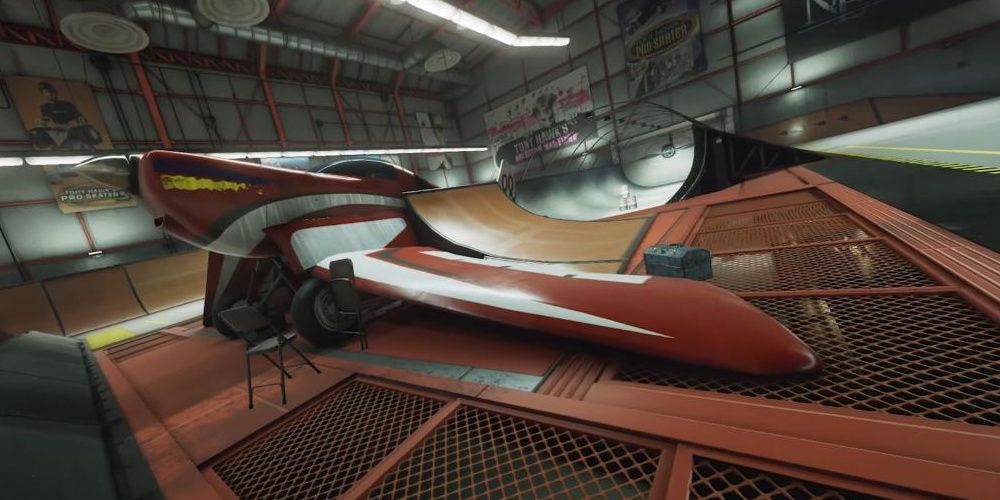 A military aircraft hangar is not designed for anything even resembling skateability. Despite that, though, the number of natural curves and rails scattered throughout the Hangar makes it a great spot for new Tony Hawk players to get their bearings. That first half-pipe next to the junked fighter plane has been home to many a burgeoning skating career.

It's also a deceptively deep level, teaching players to explore every corner and trigger every objective to realize the full extent of the area. You think you can see its full extent in the first couple of rooms, but there's both that little hidden rail thing in the back, and an entire helipad to mess around on just out of view. 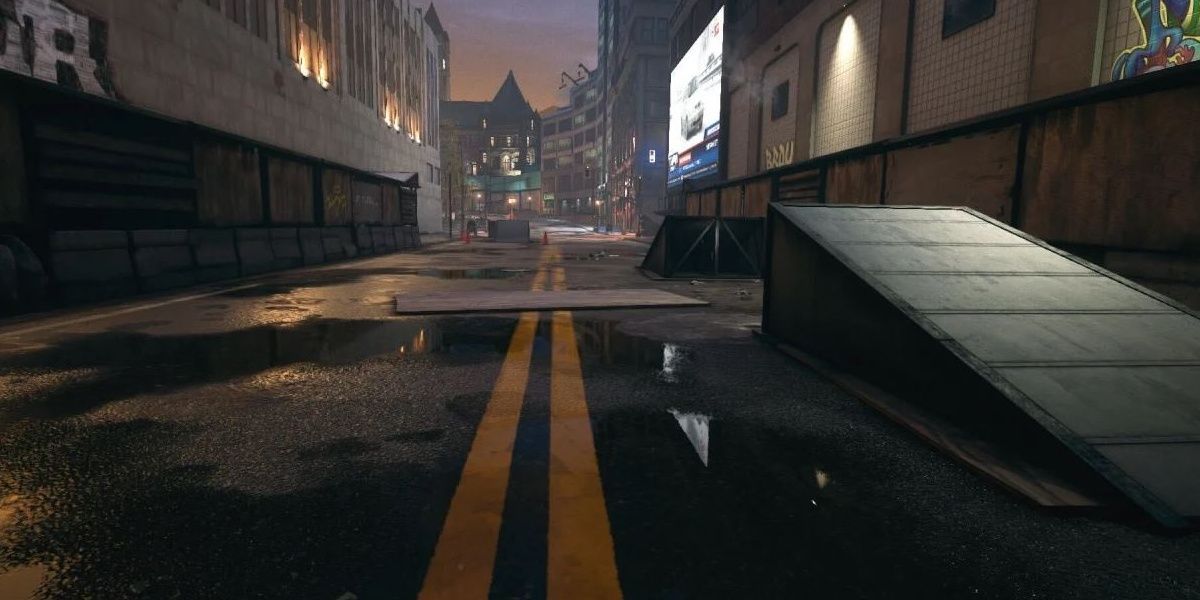 The Downtown stage is inspired by the streets of Minneapolis, Minnesota, though touched up a bit to make them more skater-friendly. There's no shortage of curved architecture, but even without that, you can just roll right into some of the buildings and wreck the place.

Skating may be an Olympic sport nowadays, but back in the olden times, it was a counterculture pursuit. It was all about flaunting danger and societal norms in the name of sick air. Doing that in real life incurs property damage fines, though, so doing it in a game is the next best thing.

8 School II – Tearing Up The Schoolyard 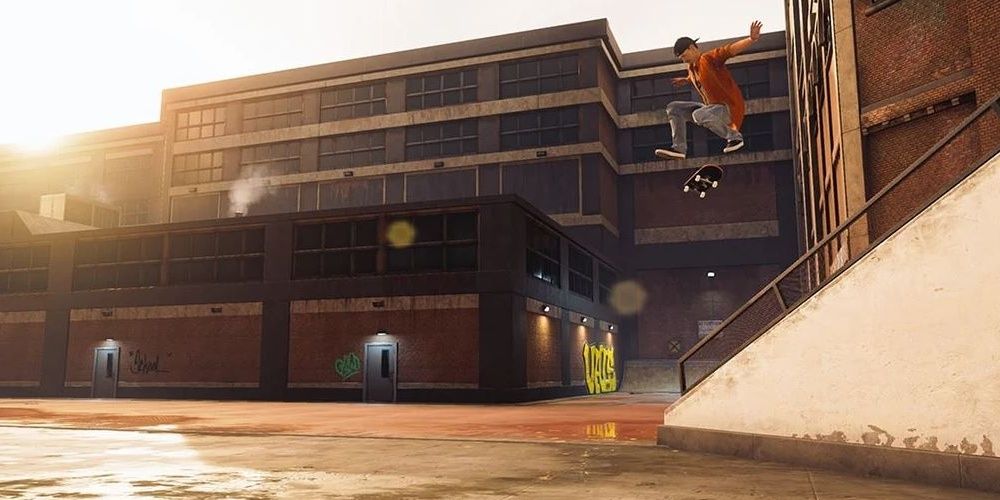 Okay, be honest with us: you've always wanted to tear up your school on a skateboard, right? The School maps in Tony Hawk's Pro Skater 1 + 2 are your chance to make that dream a reality. Imagine being that cool dude in a 90s skateboarding movie who bursts out of the classroom, leaping onto the outdoor tables in a sick grind.

The original School stage is a classic, of course, but School II earns extra points because its layout is based on a few famous school skating spots in California. Also, School II has Officer Dick, played by Jack Black, rolling around in a golf cart and yelling at you. That's just amazing. 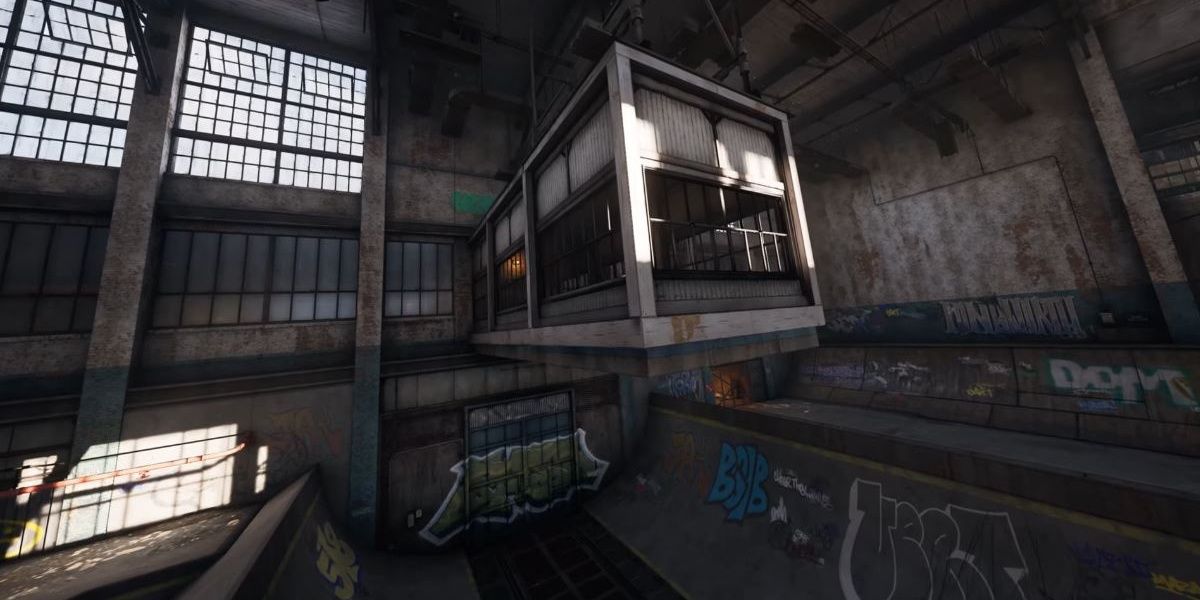 While the Hangar is a bit more of a self-contained stage, the Warehouse is the epitome of Tony Hawk's Pro Skater nostalgia. As the very first level from the very first game, you'd be hard-pressed to find at least one 90s gamer who doesn't have fond memories of this map.

From the sun's rays filtering in through the high windows to the numerous graffiti tags covering the floor and walls, everything about the Warehouse implies a longtime, hometown hangout for local skaters. Imagine just having your own abandoned warehouse to go hang out and skate in every day. Ah, those breezy summer afternoons…

6 Venice – Home Of The Magic Bum 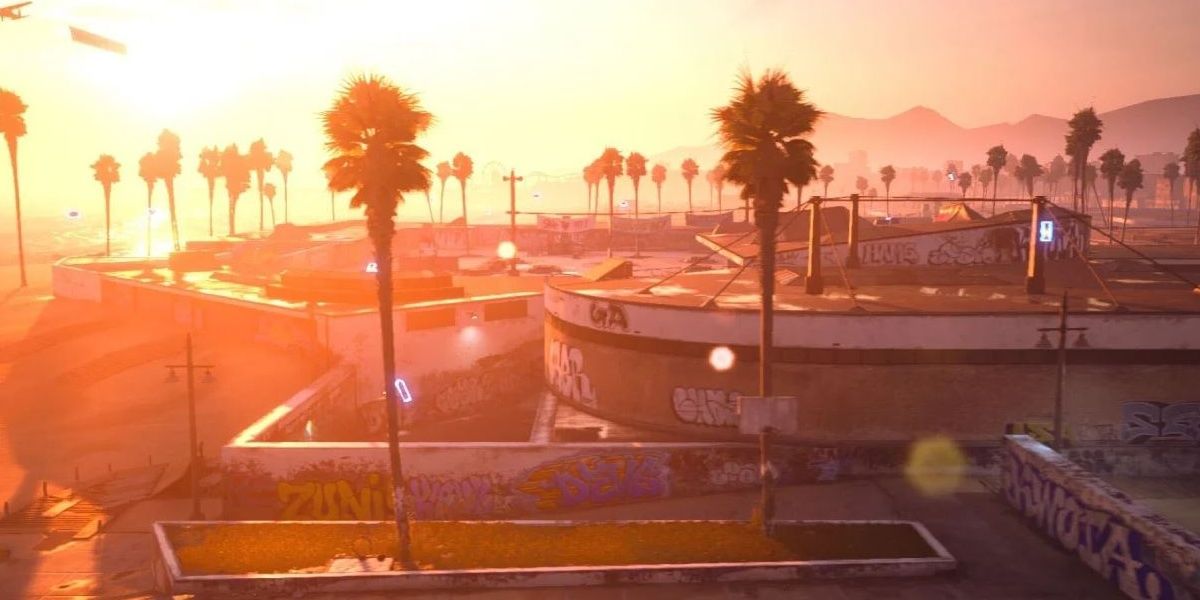 California's Venice Beach is one of the most legendary skate cities in the United States. The original area, The Pit, was sadly demolished right after Pro Skater 2 first launched, but its quality shredding memory lives on in digital form. The Venice map is a bit of a tricky level to wrap your head around, with its weird angles and numerous jumps, but it's very rewarding to explore.

Venice is also home to one of the Pro Skater series' unofficial mascots, Ollie the Magic Bum. Is following an inexplicably teleporting homeless person around, with the express purpose of doing ollies over him, ethical? Not really, but it is entertaining — not to mention downright mysterious. How does he get around so fast? 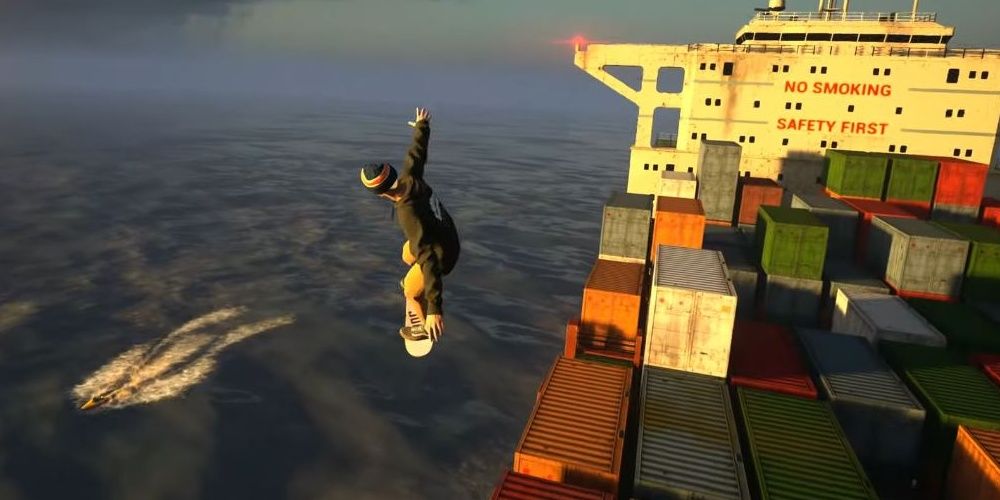 Skateboarding is a sport of science. It's all about balance, momentum, and gravity. Now, what happens when you take a couple of those elements and crank them up to their logical extremes? Well, more than likely, you'll get broken bones and a concussion. But in the rare instance that doesn't happen, you'll get the sickest air imaginable.

The Chopper Drop isn't especially large or elaborate, more of a bonus level than a proper map. But it doesn't need to be elaborate to be amazing. It's a single half-pipe, floating on a barge in the middle of the ocean, that you drop into from a helicopter idling hundreds of feet in the air. This is pure, fantasy skateboarding right here. 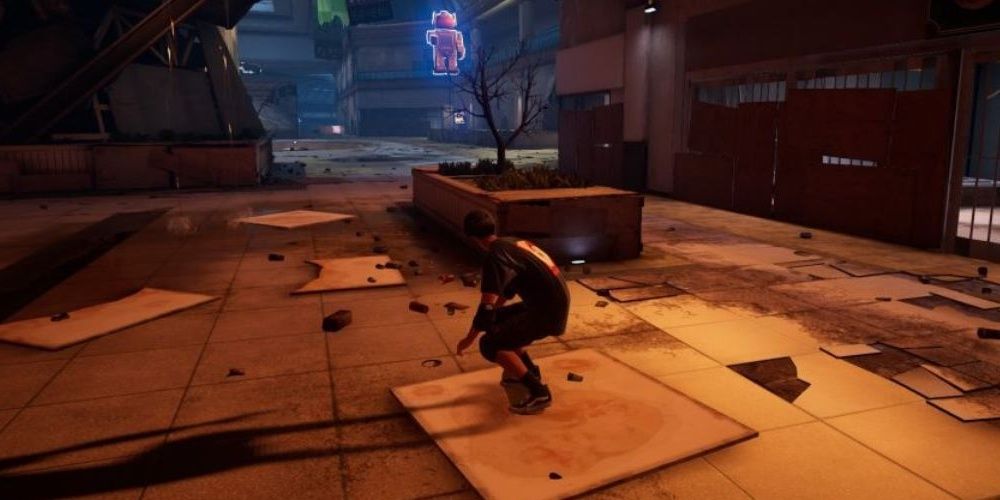 It's a little sad that malls around America are going under due to a lack of foot traffic, but at least all that empty, polished flooring makes for great skating material! As one of the original "downhill" style levels in the Pro Skater series, the Mall forces you to reanalyze everything you know about skating into a streamlined format, to optimize your score.

With the addition of downhill momentum comes long jumps and lengthy wallrides, encouraging you to explore the map with the power of speed. It can be a little frustrating to miss a jump, then have to either loop the level around or maneuver yourself back up manually, but when you finally nail that perfect jump and see all there is to see, it's worth it.

3 Downhill Jam – This Dam Is Not Built To Code 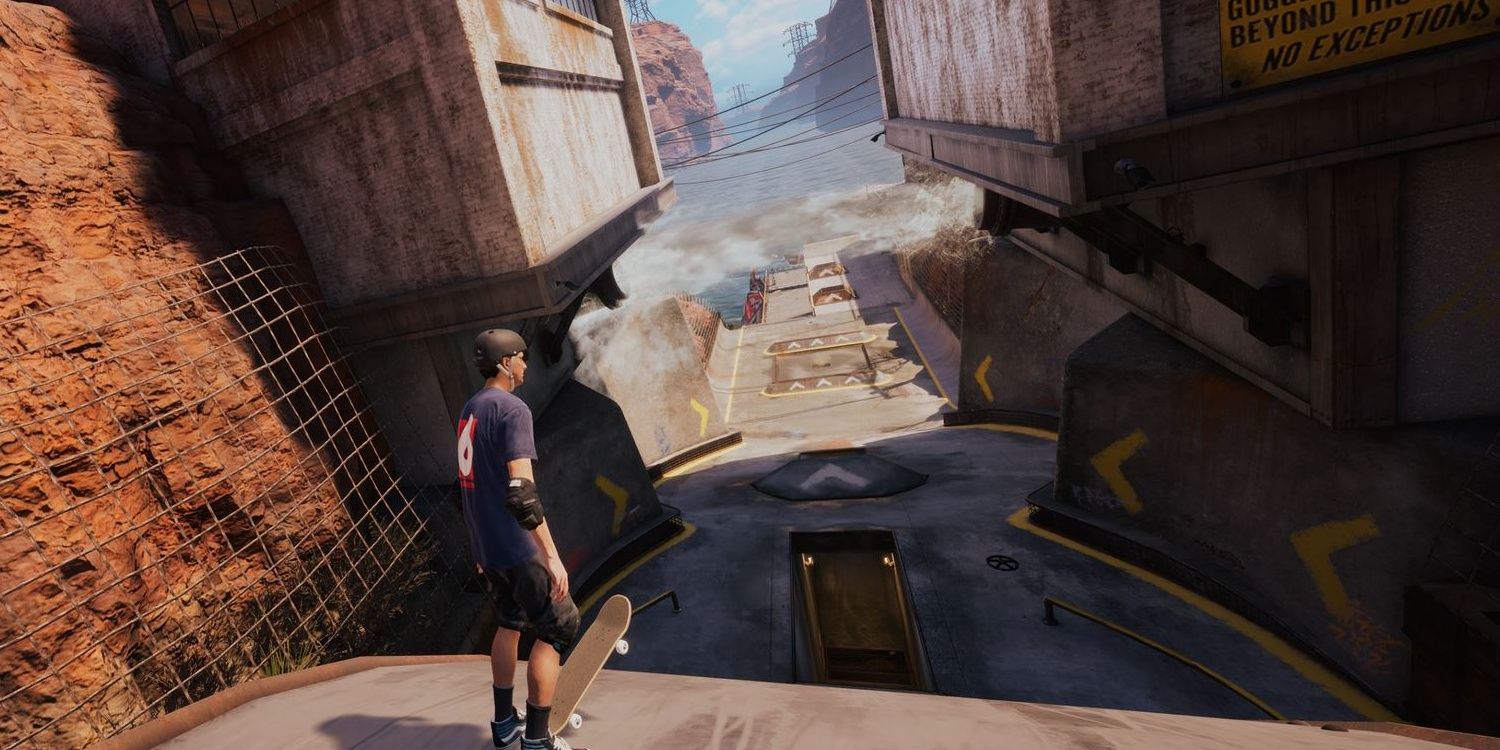 A partially-flooded, somewhat dilapidated dam falling down the side of a river is not a safe place for skateboarding in the slightest. This, naturally, means it's one of the best places for skateboarding. The Downhill Jam is a downhill level with all the safety rails stripped off. Steep, gnarly hills, jutting architecture, and giant drops all but guarantee that failure means instant death (or just respawning, which is still embarrassing).

Storming down the wood and dirt road of the Downhill Jam has an almost action-movie vibe to it. Imagine the entire thing collapsing behind you, water surging forth, as you scream down the hill on nothing but a piece of wood and some plastic wheels. Add a suit and some snazzy music, and it's a Bond movie.

2 Roswell – The Ultimate Flaunting Of Authority 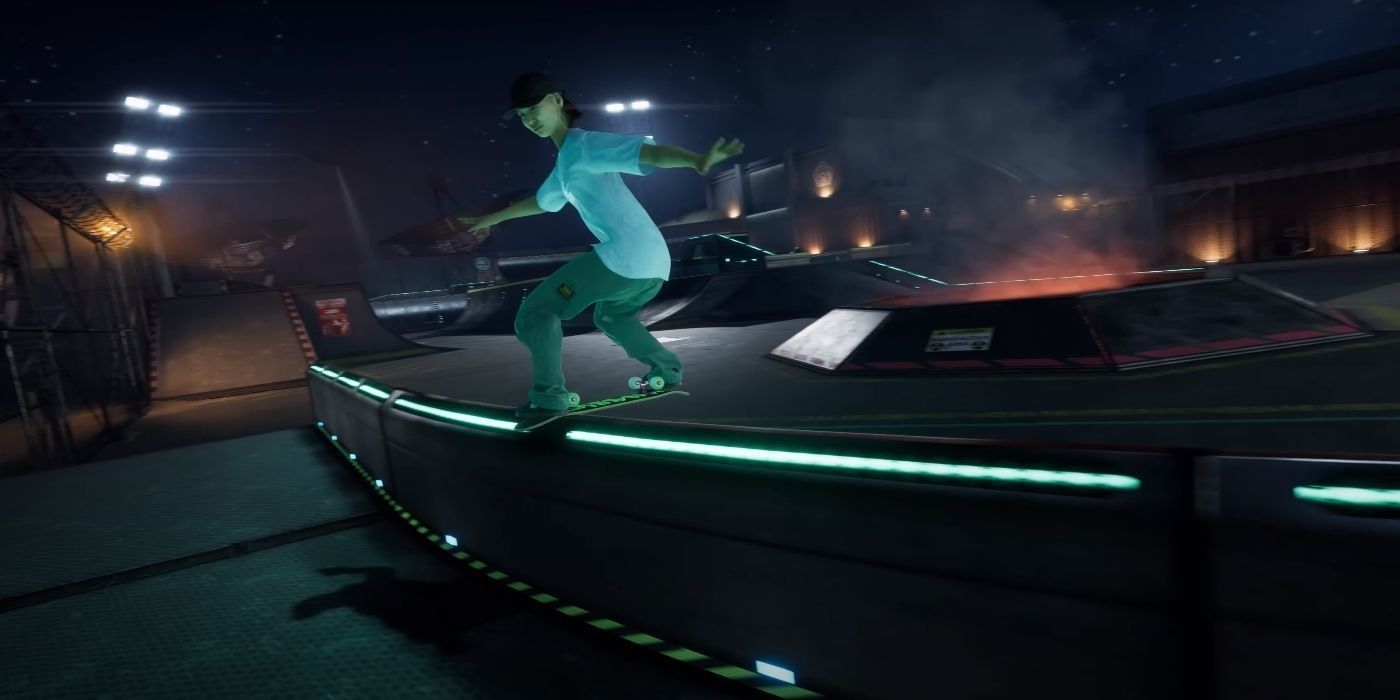 As we mentioned before, part of the appeal of skateboarding, at least in the 90s, was its counterculture aspect. If someone tells you "this place is off-limits, you can't skate here," that just makes you want to tear the place up even more. So, pop quiz — what's the biggest rude gesture to authority you could make with a skateboard? Yep, tearing up a classified government compound.

Inspired by the legendary Area 51, Roswell is jam-packed with both prime skating architecture and hidden depths. You can just hang around the outside of the area if you're only here to skate, but if you can enter the facility proper, you'll find confiscated alien tech, grays on the dissection table, and other delightfully icky wonders. 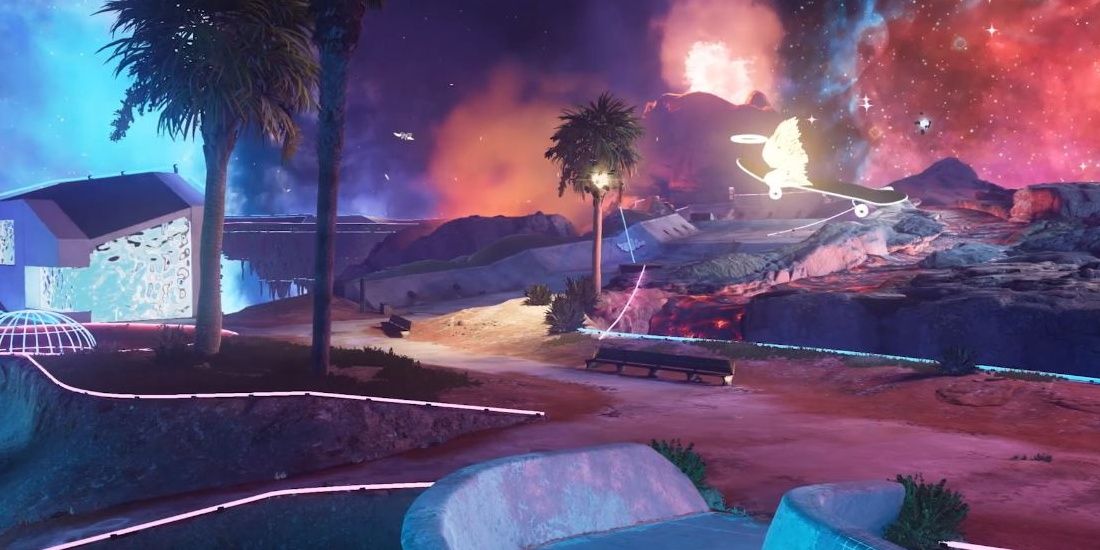 There comes a time in every skater's life when the impossible happens: they achieve Unreal Air. It is at this moment that the mind escapes the confines of the body and ascends to the one true plane of skating glory: Skate Heaven. Welcome, friend, we've been expecting you.

Aside from the awesome factor of a floating skate park in space, Skate Heaven's layout is also inspired by numerous historical skating landmarks. These landmarks include, but are not limited to, the San Dieguito High Ten Stair Rail, the Animal Chin ramp, the Upland Combi and Pipeline, and even the backyard of Tony Hawk himself.