The narrative campaign of Total War: Warhammer 3 contains uniquely challenging mechanics, designed to showcase the horrific landscapes of the Realms of Chaos. Entering via Chaos Rifts, players will seek to claim four Daemon Souls by defeating the guardian of each realm and unlocking the climactic final battle against Be'lakor, the Dark Master.

The point of much contention within the community, these systems artificially shorten the narrative campaign, and understanding how they work is crucial. This guide will seek to explain how Chaos Rifts and the Realms of Chaos work, and how to turn these important mechanics to your advantage on the campaign map.

What are Chaos Rifts? 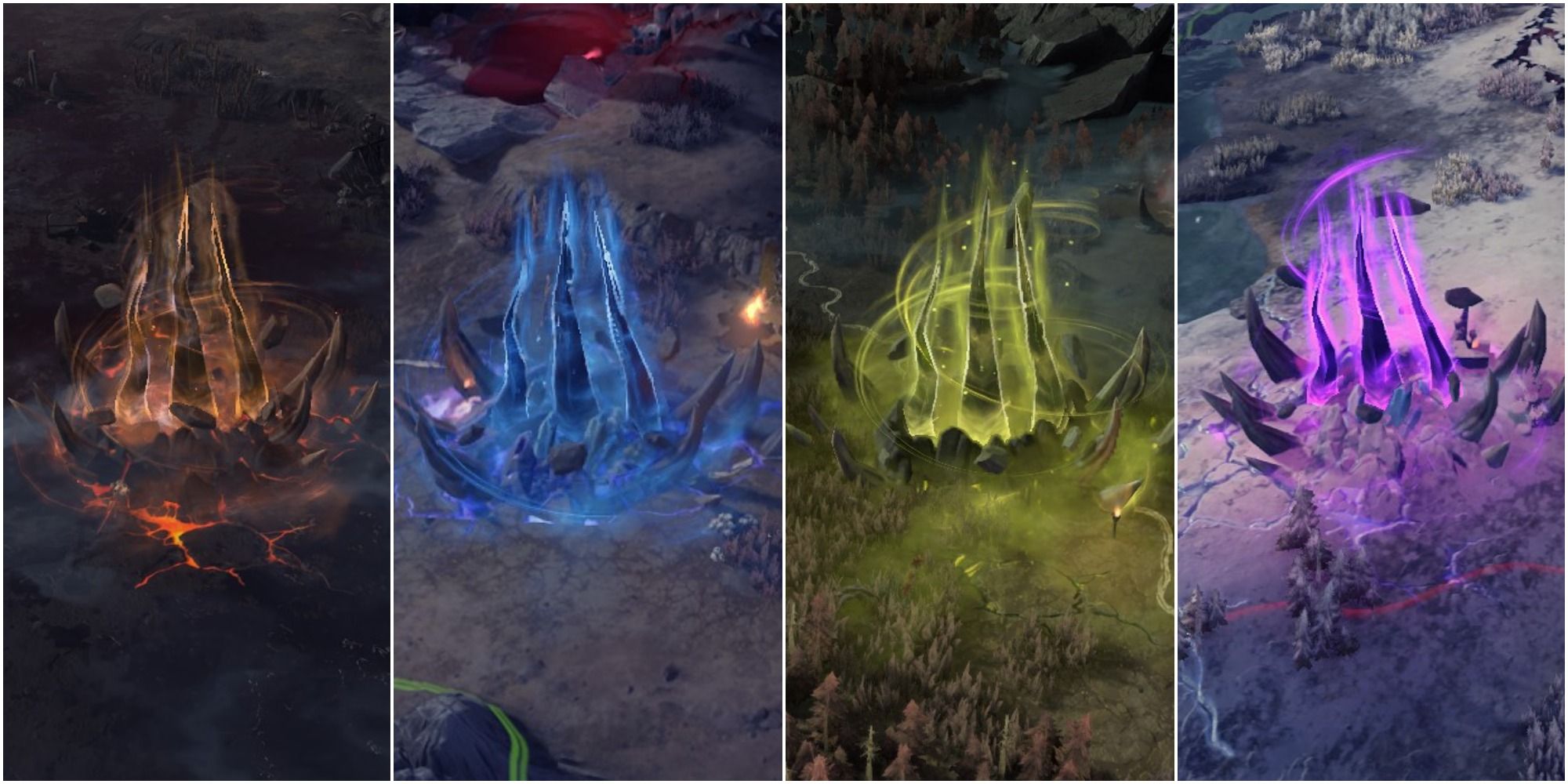 Simply put, Chaos Rifts are how you enter and exit the Realms of Chaos. Spawning every 25 to 35 turns, they will last for another 15 turns before vanishing, and you can close them early by moving an army to them and battling a defending force, or via a special Hero action. Rifts come in four varieties: Khorne, Slaanesh, Nurgle, and Tzeentch.

While a Rift is active, it will continually spew forth a certain Corruption, and due to the fact there can be multiple spawns in one area, they can cause a large swing in the provincial corruption balance. Rifts will also spawn enemy armies aligned with the type of Rift, and these can wreak havoc in unprotected lands.

While Chaos Rifts can be prevented or closed at your convenience, you are also able to exploit them to great effect. Entering a rift allows you to teleport to any other active rift within vision range, allowing you to travel vast distances in the blink of an eye!

However, the primary use of Chaos Rifts is to enter the Realms of Chaos, which will be necessary to triumph in the Narrative Campaign.

What Are The Realms of Chaos? 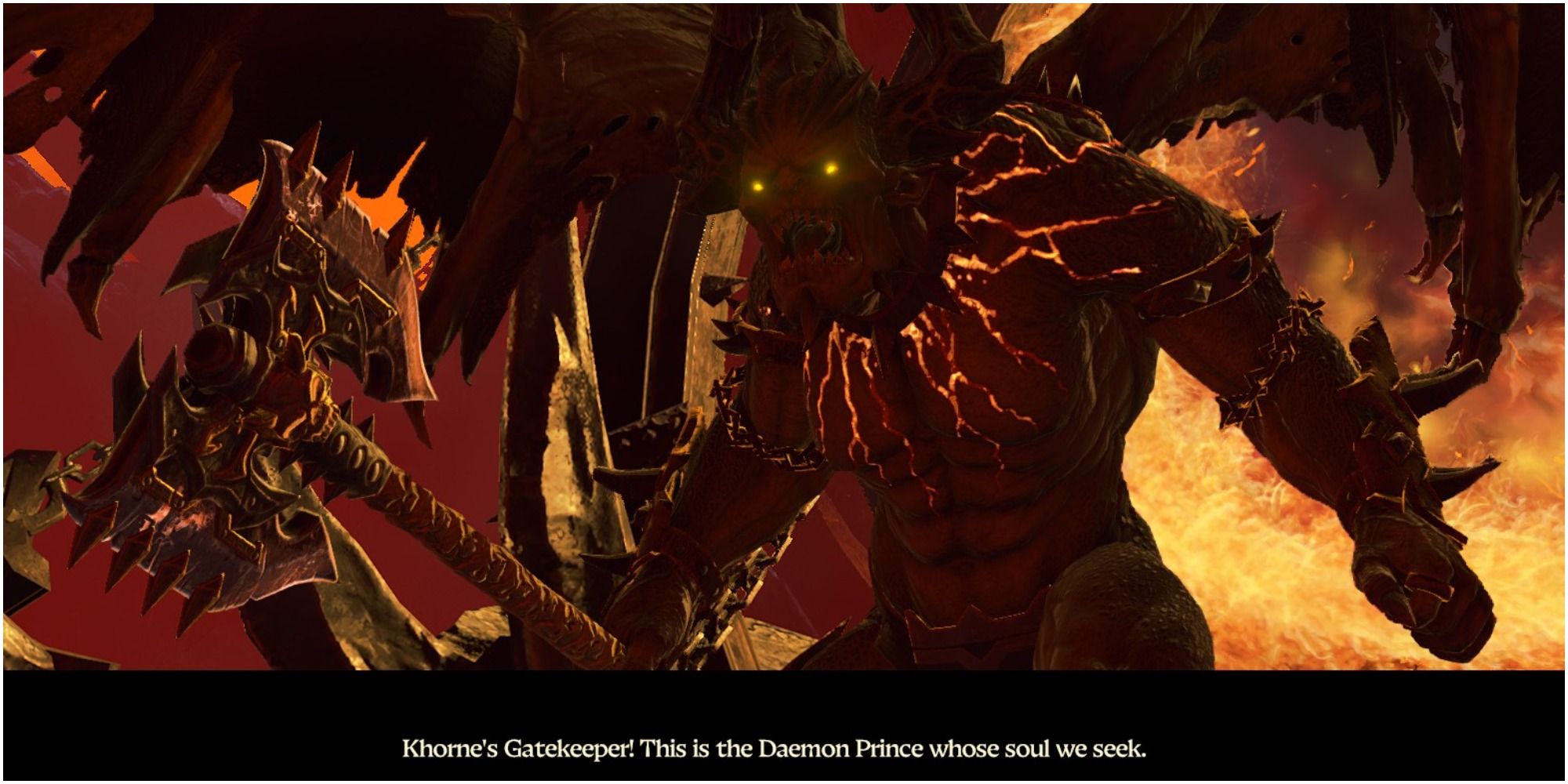 Upon entering a Chaos Rift, you may select a realm of Chaos to travel to. Each will present different challenges, but all share the same goal. Defeat the defending Daemon Prince and their army, claiming one of the four Daemon Souls. Each final challenge will be a Survival Battle, a new battle type in Total War: Warhammer 3. These will involve you progressing through the battlefield, capturing key objectives, and fortifying your defences against waves of incoming enemies. They can be fairly challenging so bring your best army, and make you are sufficiently healed up.

The realms themselves offer various challenges, varying from simple to frustratingly hard. Each realm will challenge you differently, and there is generally a preferred route for Soul acquisition:

This order will ascend in difficulty, but will also give you the most breathing room when it comes to the A.I. They will contest you in each realm, and share the same goal as you, however, they can 'cheat' their way through the more challenging mechanics.

To counteract this, upon defeating an enemy Lord in a Chaos Realm, you will force them to relinquish all of their current Souls, making them begin the campaign all over again, and buying you vital breathing room.

Whilst in a Realm of Chaos, your armies will be subject to acquiring random negative traits specific to the realm. Your goal is therefore to not linger, completing your objectives in the shortest time possible. Completing the Survival Battle will cleanse you of any debuffs, and grant you bonuses dependent on the realm. Even if you fail to beat the realm, you can remove the traits by garrisoning your Lord in a settlement with the correct Protection building. 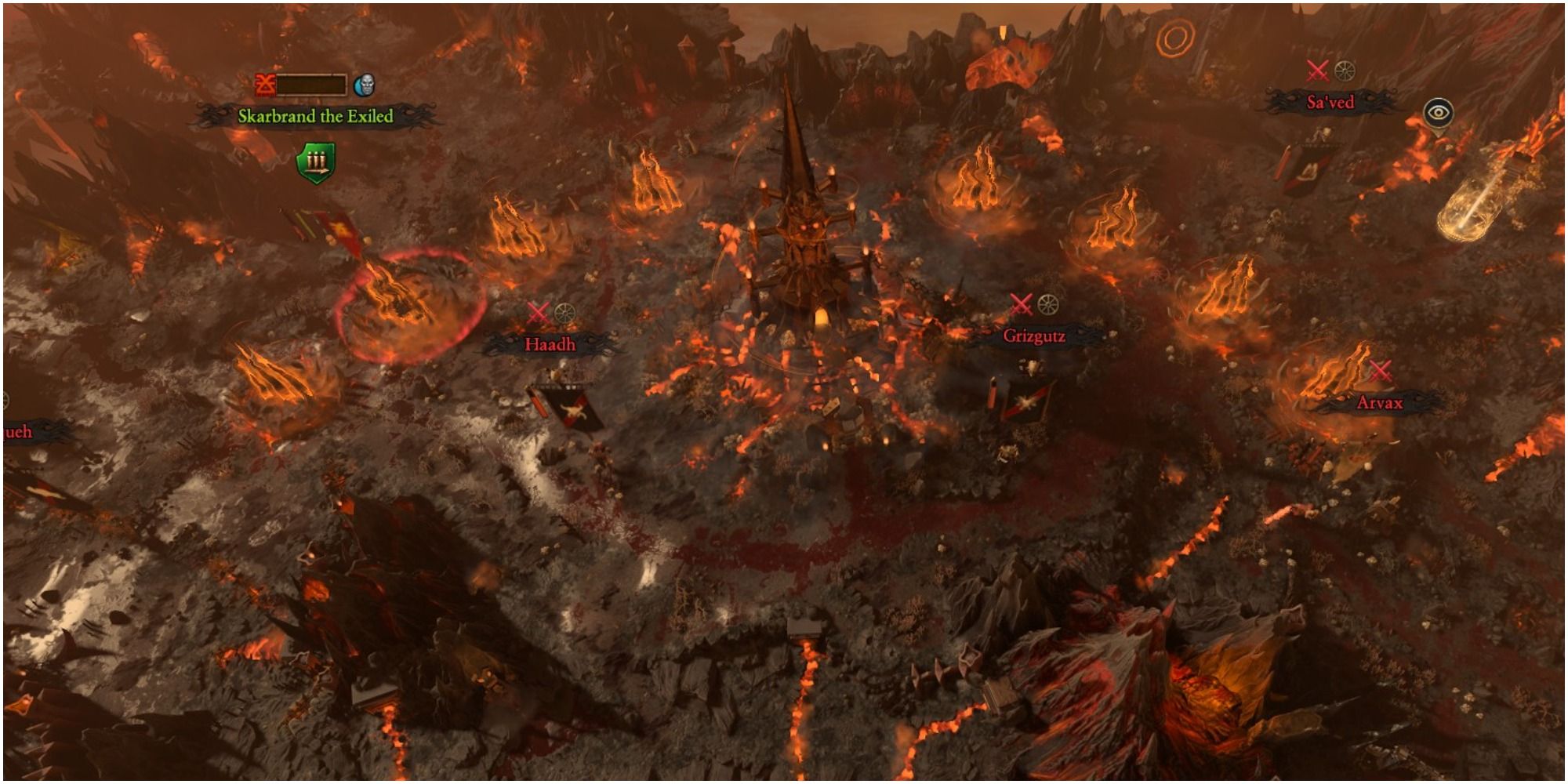 The Realm of Khorne is the easiest and simplest realm. The goal is to fill your red bar by defeating the rogue enemy armies which abide there. These armies can range in strength, but none are hugely difficult. At each corner of the map is a powerful unique weapon, as well as a full army replenish but these will, unfortunately, despawn upon entering another Realm of Chaos. Once the bar is filled you may challenge the Daemon Prince in the center.

The main difficulty of this realm is the speed with which the A.I. will also complete it. Getting in as soon as possible is vital, or even going on the aggressive and attacking other Lords present are good options to give yourself enough time. 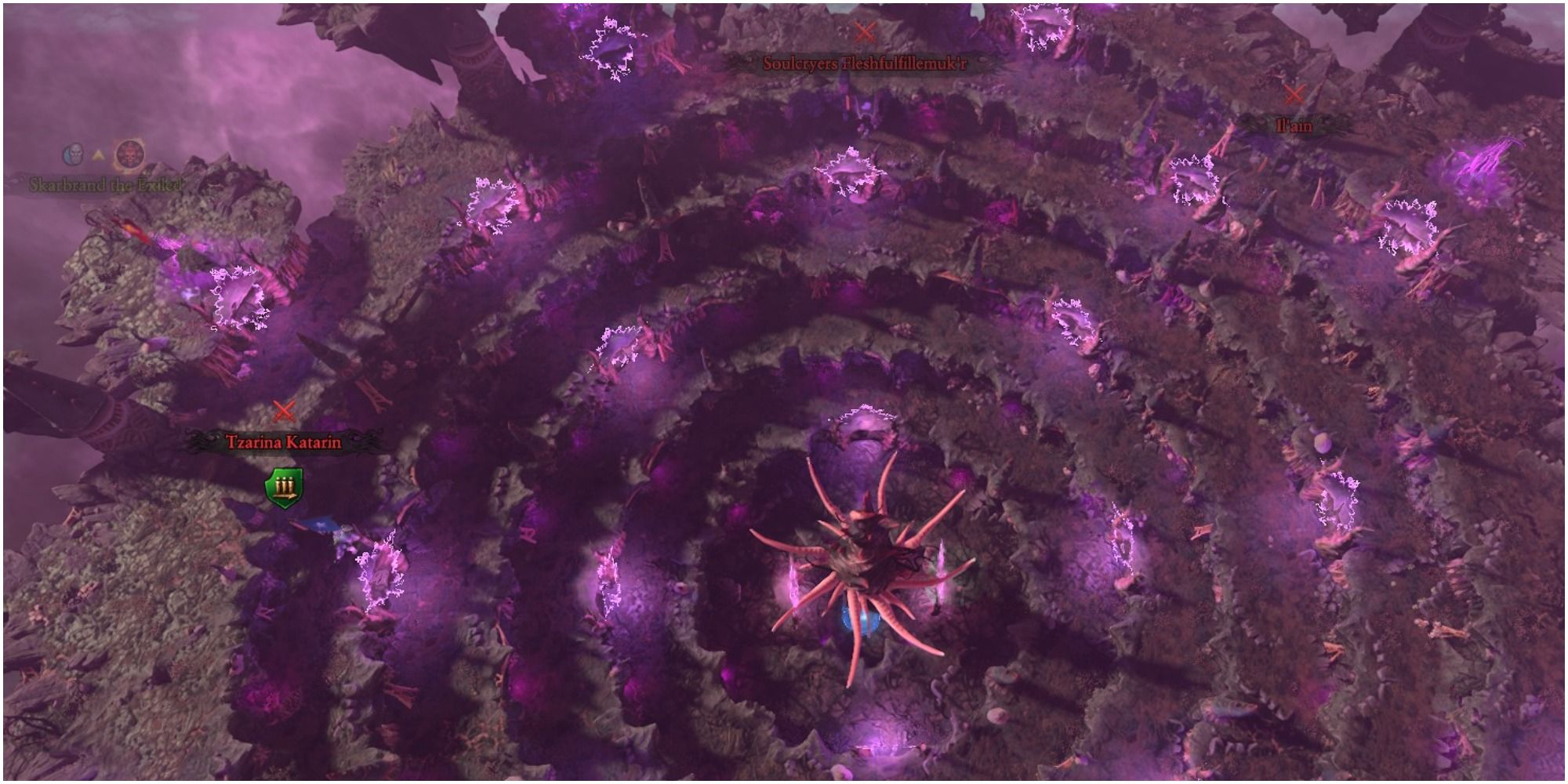 The realm of Slaanesh is relatively straightforward. March through various portals to traverse downwards towards the central tower, either beating or avoiding the enemy forces in your path. The major problem you will face is player greed since Slaanesh will tempt you with amazing gifts to leave. These can range from small amounts of income to devastating unique weapons and permanent Lord and Hero levels. If you accept the Lord of Pleasure's offer, you will instantly be transported out, although you may return at a later date.

Whether you choose to accept or not is up to you, and farming gifts in the early Rift spawns is a viable strategy, but keep in mind you will eventually need to acquire the Slaanesh Soul to finish the campaign. 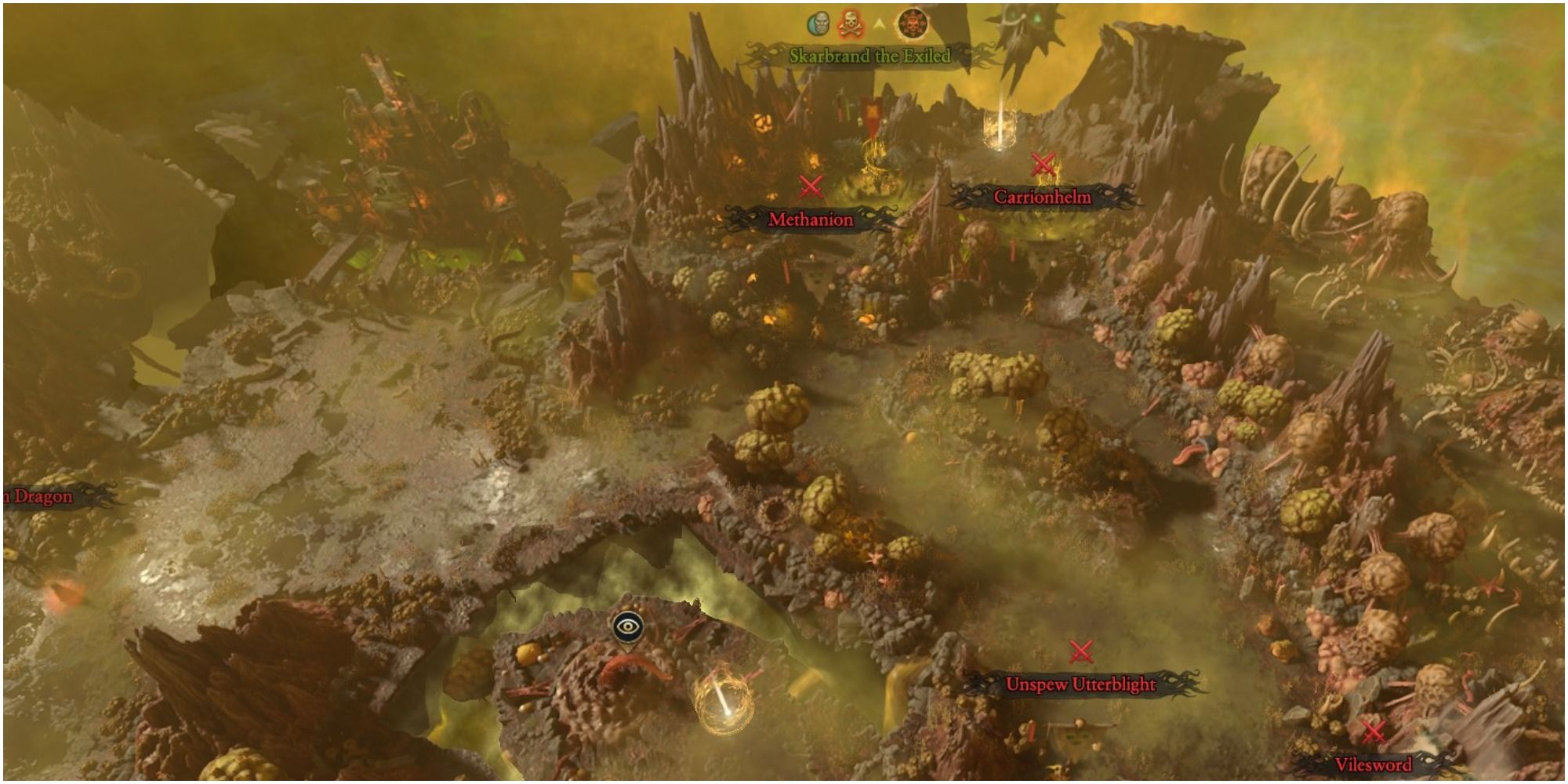 Nurgle is the first properly challenging realm you will face when following the recommended order. You will constantly be taking attrition, and when combined with the enemy armies this can significantly impair your advances. Fortunately, there are white circles of safety scattered throughout, which will heal your army and grant you resistance to the attrition. Your goal is to travel from one end of the map to the other, which will allow you to attack the Northern part of the realm.

Preparing beforehand with traits and researches that minimise attrition damage can be very useful, as you will find limited opportunities to heal. Equipping your army with a healing spell caster and reducing the damage taken in battles with rogue armies is of paramount importance in making your visit to Nurgle's Garden a smooth experience. 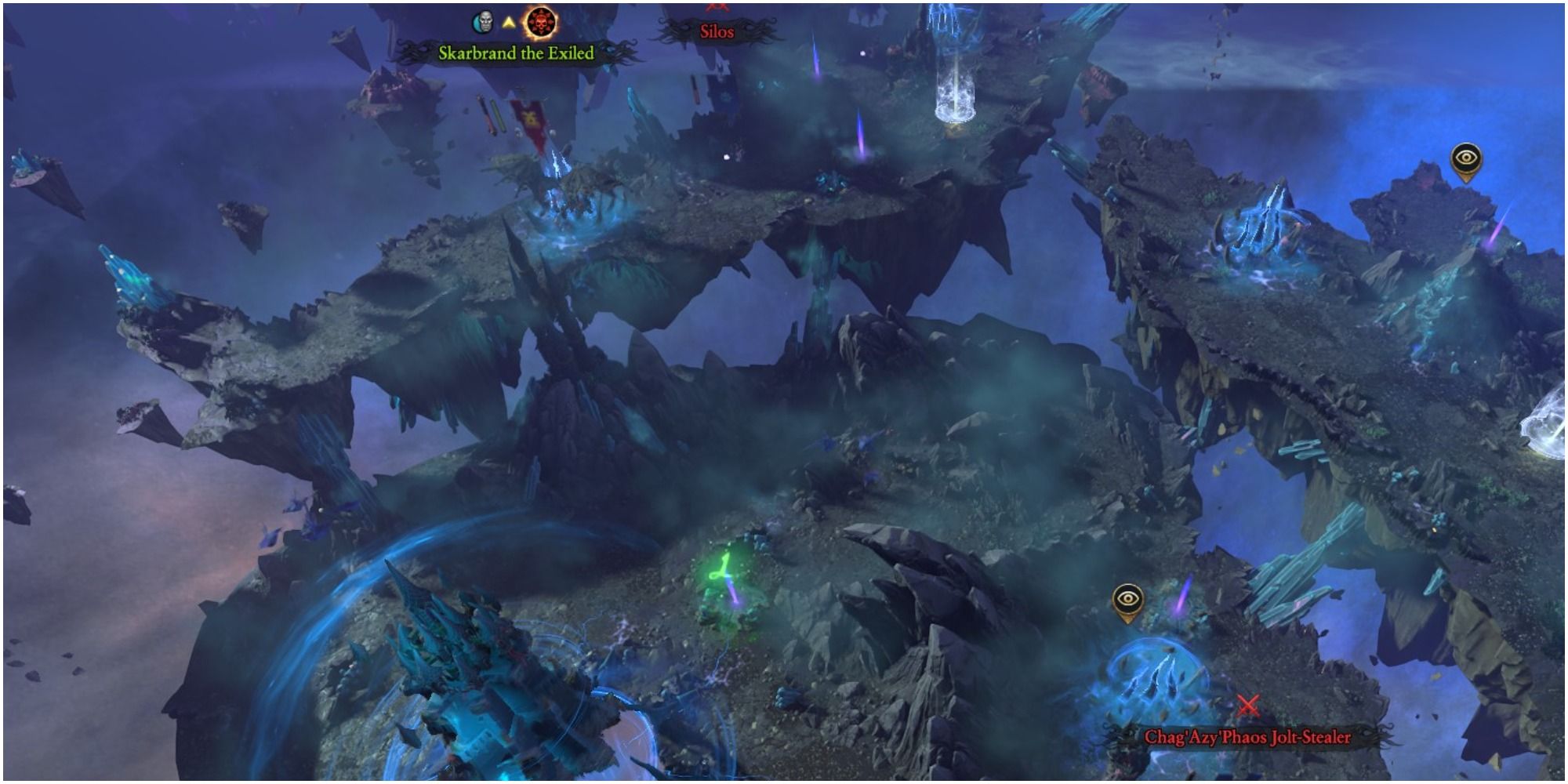 The Realm of Tzeentch is without a doubt the hardest and most frustrating realm in Total War: Warhammer 3. You progress through the realm via random combinations of portals, which can result in either an easy victory or a long time-consuming endeavour. Sadly, the A.I. will easily waltz their way through the correct route, meaning you are on a short timer to beat them to the Soul. Helpful white circles will grant you special boons such as empowered research rates, and show you the correct sigils above the portals, but messing it up early is already enough to condemn you and ensure your exit from the Realm of the Deceiver.

Your best option is to leave this realm until last, and hope that the A.I. factions have already collected their Tzeentch Soul. This will give you more time and allow mistakes to be made. Focusing on defeating enemy armies and accessing the white circles will help you progress more quickly, but you still only have four to five turns before the A.I. claims a Soul. An irritating all-around experience and one Creative Assembly will need to address in the future.