Slaanesh is the youngest of the Chaos Gods in Total War: Warhammer 3. As the Prince of Pleasure and Excess, he focuses on tempting mortals into his service with promises of power and delight. While his legions are certainly capable in combat, his strength lies in his unmatched ability to spread his influence across the world and make kings bow before him.

Playing as Slaanesh successfully means knowing when to engage in combat and when to bide your time. By making thralls of the other factions you can have them do your dirty work while you focus on outplaying the other gods and taking the Forge of Souls for yourself.

Although Slaanesh and N'Kari each possess male and female aspects and anatomy simultaneously, the game uses he/him pronouns to refer to both characters, and as such this guide will do the same. 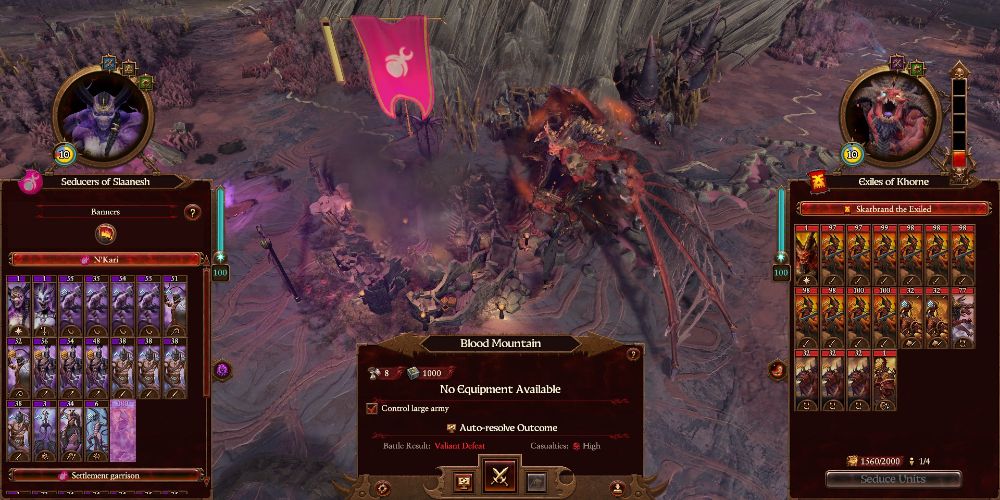 Before entering combat, a Slaaneshi Lord can spend Favour to seduce enemy troops to their side. There is a limit to the amount of Favour that can be spent on a single battle, and the cost of seducing a unit is proportional to that unit's power. This means that in most cases you will only be able to convert a maximum of one to two units in a given battle.

Seduced units will fight on your side exactly as though they were under your control for the duration of the battle. If the enemy army is destroyed, the seduced unit will permanently join your army. Otherwise, it returns to its original owner's control after the fight. 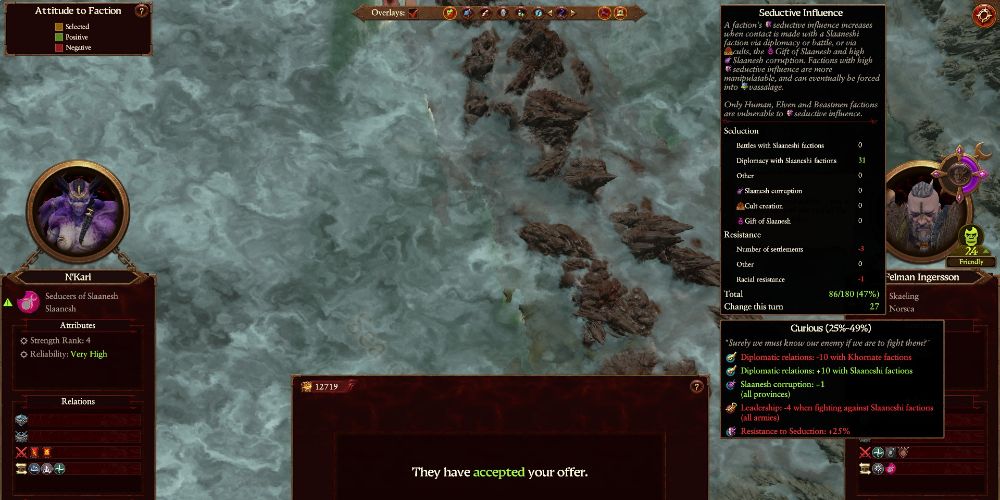 Any time a Human, Elf, or Beastman faction completes a diplomatic negotiation with a Slaanesh faction, Slaanesh gains Seductive Influence over them. Seductive Influence makes the affected faction more amenable to future deals. When a faction's Seductive Influence reaches its maximum, Slaanesh can spend Devotees to permanently vassalize them. Given that N'Kari receives considerably more Favour from vassals than other Legendary Lords, this is a powerful source of income for him. 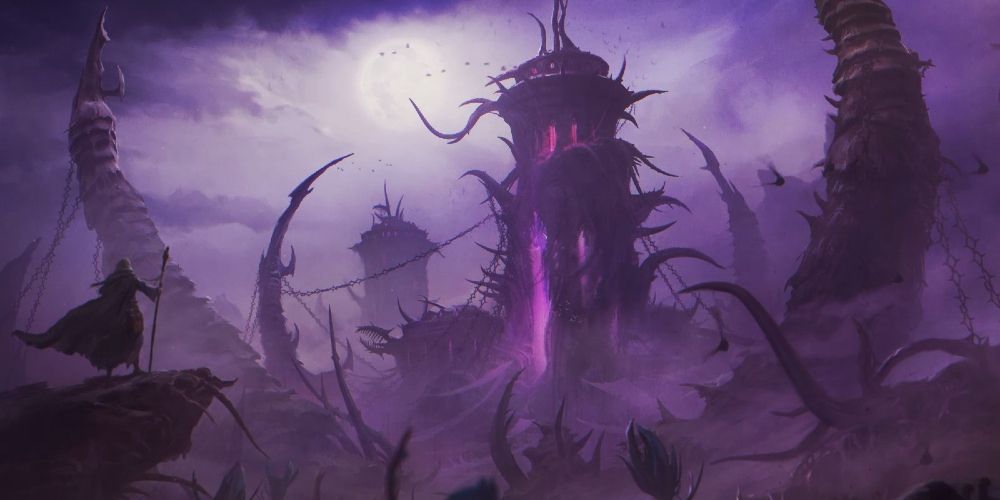 Many actions that you can take as a Slaanesh player will result in your cult gaining Devotees. This unique resource can be used to spread your corruption throughout the Old World. If a province that you don't control has enough Slaanesh Corruption, its settlements have a chance of spawning cults. These building chains belong to you even if the province doesn't, and by spending Devotees you can upgrade them to enhance your influence over mortals.

Additionally, by spending 1000 Devotees you can send your followers far and wide to establish cults manually. Doing so creates a new cult in up to three randomly-selected provinces owned by Humans or Elves.

For a cost of 300 Devotees, any Slaaneshi Lord in a province with sufficient Slaanesh Corruption can summon a Disciple Army by clicking the button next to the normal recruitment button. Disciple Armies cannot recruit new units or replenish casualties, and their Lords cannot equip items or learn Skills. This makes Disciple Armies expendable auxiliary forces to be used when needed. The summoning Lord and province will both have to wait for a cooldown to expire before they can be used to summon another Disciple Army.

Defeating an enemy Lord in battle or attempting to take a Hero action against an enemy character has a chance of inflicting them with a Gift of Slaanesh. Each character so affected will cause the Slaanesh player to gain Devotees each turn, and will generate Slaanesh Corruption wherever they are – all the more reason to vassalize your enemies rather than destroy them. Forcing vassalization on an enemy with a Gift of Slaanesh ensures they will not only fight for you but provide you with a steady stream of Devotees. 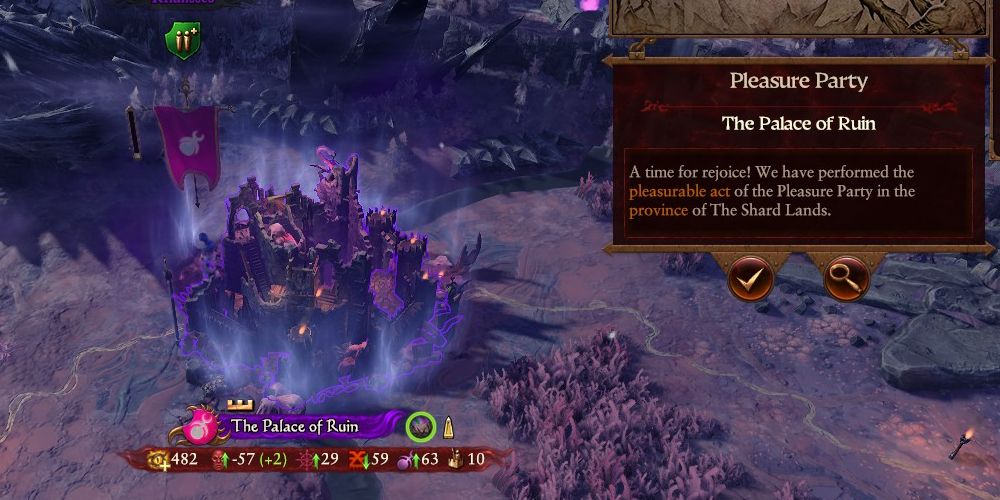 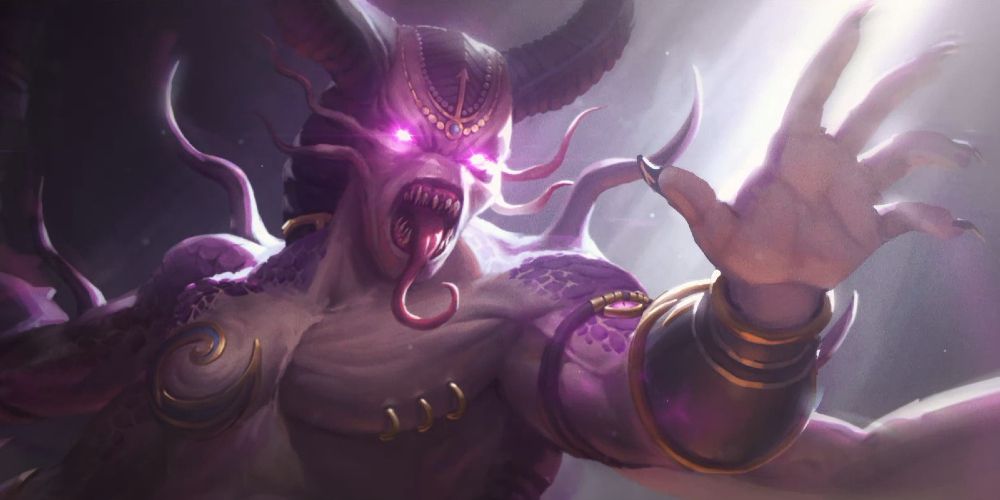 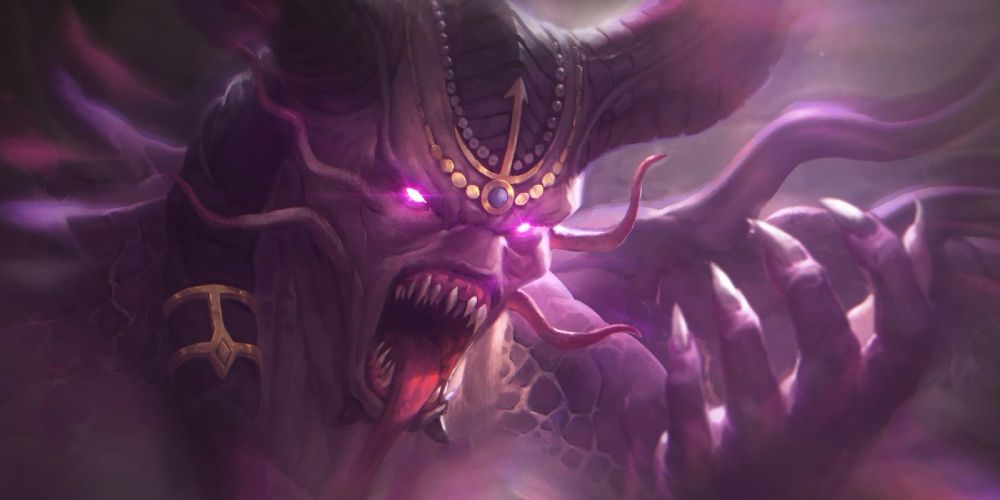 Slaanesh has a single playable Legendary Lord; N'Kari, the Arch-Tempter. This monstrous Keeper of Secrets is a diplomatic mastermind, earning a flat +20 relations bonus with all factions at all times. If another faction's lands are rich, consider vassalizing them instead of pillaging – N'Kari receives fifty percent more tribute from his vassals.

As with all starts in the game, your first task is to eliminate the enemy force at your doorstep. Defeat the Khorne army to the south of the Palace of Ruin to earn a free Hero to accompany you. You've got plenty of Favour to start the game with, so seduce one of the enemy units to your side before entering the fray. With that done, upgrade the Scented Pavilion in your capital and begin construction in the empty building slot. We recommend either the Addiction Pens to allow recruitment of cavalry or The Dance of Dreaming for additional income.

The early game will be spent fighting against Khorne's minions, so the technology Blood God's Disgust will provide you with bonuses in those battles. Don't worry about the diplomatic penalty with Khorne factions – Khorne and Slaanesh are immortal enemies, so it's all-but-inevitable that you'll be at war for most of the game. After that, Aberrant Promiscuity will increase the Growth in your provinces, making it a good second selection.

Until you take some Khorne settlements in your home region, you'll need to be careful about overspending on recruitment. Marauders are an economical choice who will serve you well until you can afford to fill your ranks with proper Daemons – recruit two Marauder units before ending your first turn.

Thanks to N'Kari's diplomatic bonus, you should be able to easily sign a Trade Agreement with some or all of the Norscan tribes to the south. The extra income is both useful and free, and it will pave the way for you to eventually vassalize or confederate the mortals.

At the beginning of Turn two, you'll receive a quest to take the Palace of Princes from Khorne. The settlement is fairly well-defended, so it's worth spending a few turns building up N'Kari's army before laying siege. As before, you can also seduce some defenders to your side before the battle begins.

When Pleasurable Acts become available, throw a Pleasure Party in your home province. Growth is slow at first since Khorne controls most of the territory, so the… increased birth rate will be useful in upgrading your palace promptly.

While you're besieging the Palace of Princes, you should have enough income between your capital and your trade with the Norscans to recruit a second Lord. Choose a leader whose starting Trait appeals to you and build up an army of 10-12 units. As before, these should mostly be Marauders to save on upkeep, but you can vary their loadouts between axes, spears, and Hellscourges and still have some Favour leftover for a unit or two of Daemonettes. Once your second army is ready to go, they can be dispatched to besiege the Fetid Catacombs to the east or raid your southern neighbors for Favour and Devotees as the situation warrants. Be warned however that if you choose the second option your new (and inexperienced) Herald will be dangerously close to Carnalstare's capital at Blood Mountain and at risk of a counterattack.

As you consolidate your foothold on The Shard Lands, the Warriors of Chaos Lord Hezxus may wander into your territory. You begin the game at war with him, and his army is strong enough that he could prove an unwelcome distraction from your war with Khorne. Don't be afraid to bribe him into a peace treaty if he ventures too close to The Palace of Ruin. You can always destroy him (or better yet, convert him) later.

The Witstealer Sword And Beyond 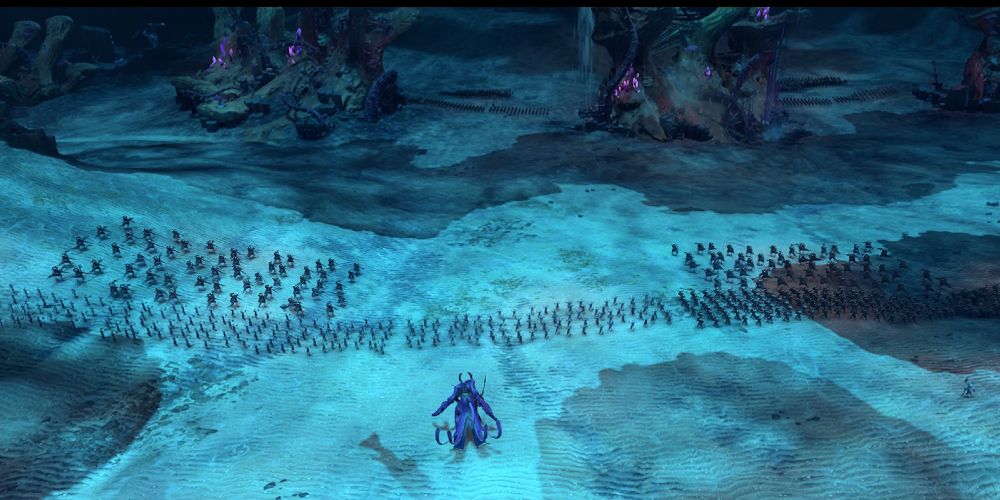 Around turn 25 or so you will receive a Quest to retrieve the Witstealer Sword from its resting place beneath the ocean. N'Kari can teleport to the battle at any time he isn't garrisoned or otherwise busy, but be warned – you'll face a powerful High Elf army bent on keeping you from retrieving the weapon. Use Spawn and Spearmen to fight off the Elves' dragons while your Daemonettes and other infantry units battle the spear formations. N'Kari himself can take advantage of the Elves' tight battle lines by liberally casting Lash of Slaanesh. The blade itself, once recovered, is a very powerful magic item that enhances N'Kari's already-formidable combat prowess.

Once you have the Witstealer Sword and a secure position in the Shard Lands, send your cultists out to convert the Human nations. Save your conquests for your Daemonic brethren, especially Skarbrand. By using Slaanesh's unique diplomatic options, you'll have the kingdoms of the Old World practically begging you to rule them by the end of the campaign.