If you made the decision to protect Prince Roland from the Aesfrosti forces, you'll end up in this version of Triangle Strategy's seventh chapter. As payment for your moralism, you get to play through one of the hardest fights in the game featuring General Avlora herself.

There's a lot going on in this chapter, from multiple different plotting characters to another exploration event that has you introduced to some of Castle Wolfforts devious secrets. And then, of course, the big battle. Let us guide you through them.

Silvio learns of the plan to shelter Prince Roland, and starts hatching his own plans.

Landroi also learns of the plan and is emboldened by the show of brave loyalty.

We check in on the Mean Twins as they discuss events in their usual, mean fashion.

Anna reports that the forces marching on Castle Wolffort are led by General Avlora herself. This incites Roland's rage, understandably. 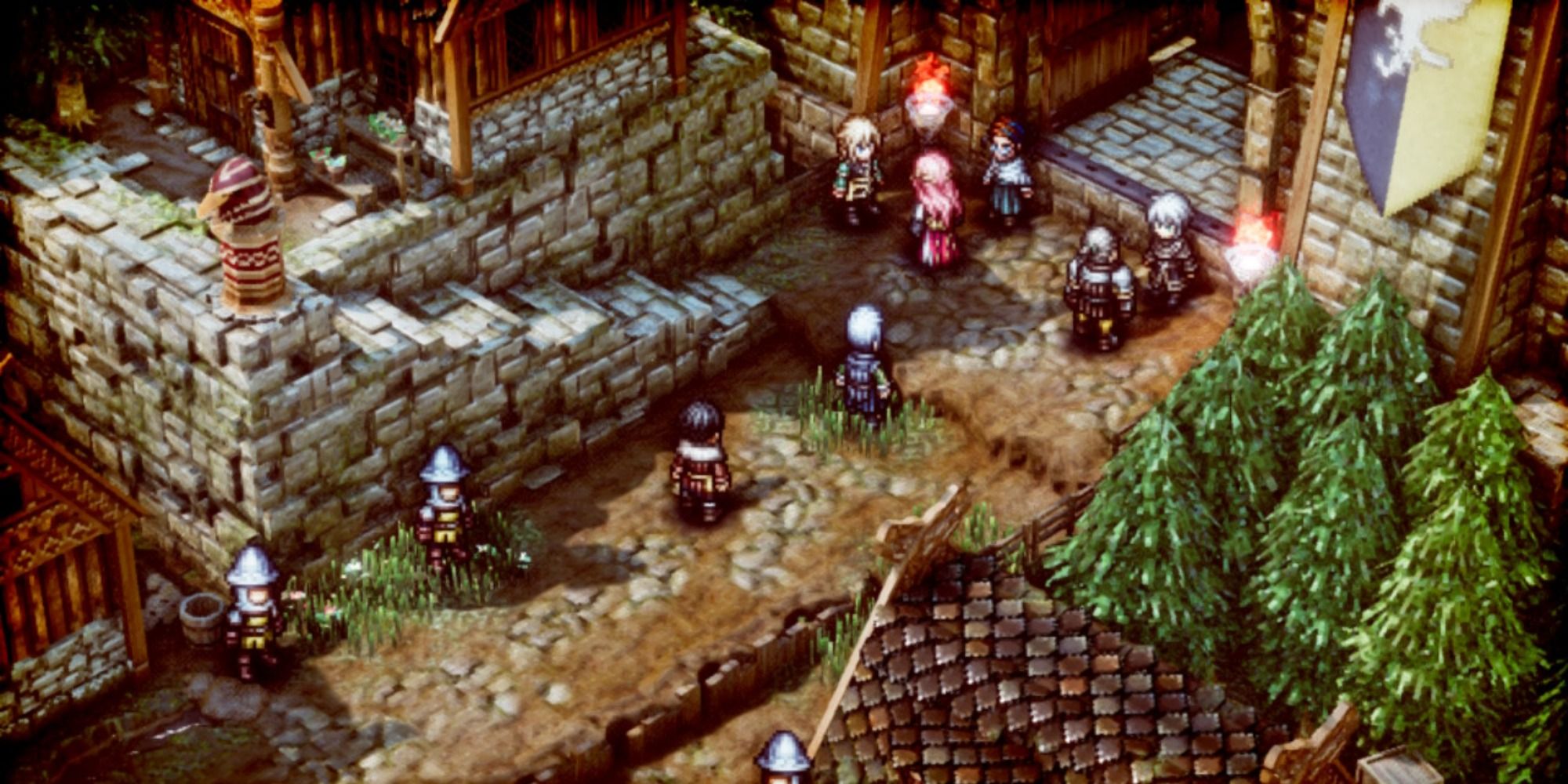 Benedict fully reveals the secret of Wolffort's secret defense mechanisms, something you may have learned about in the exploration event of the previous part. It turns out that the hawk statues dotted around the town are actually able to trigger flaming oil attacks. While these would destroy the nearby houses, they also provide a huge boon to defenders.

This event serves to let you investigate exactly how these statues will work, but there are also items and such to collect.

There are three hawk statues in the town:

This is one of the exploration events with a merchant. Remember, you can always head into your Encampment and take part in mental mock battles if you need some more coins. 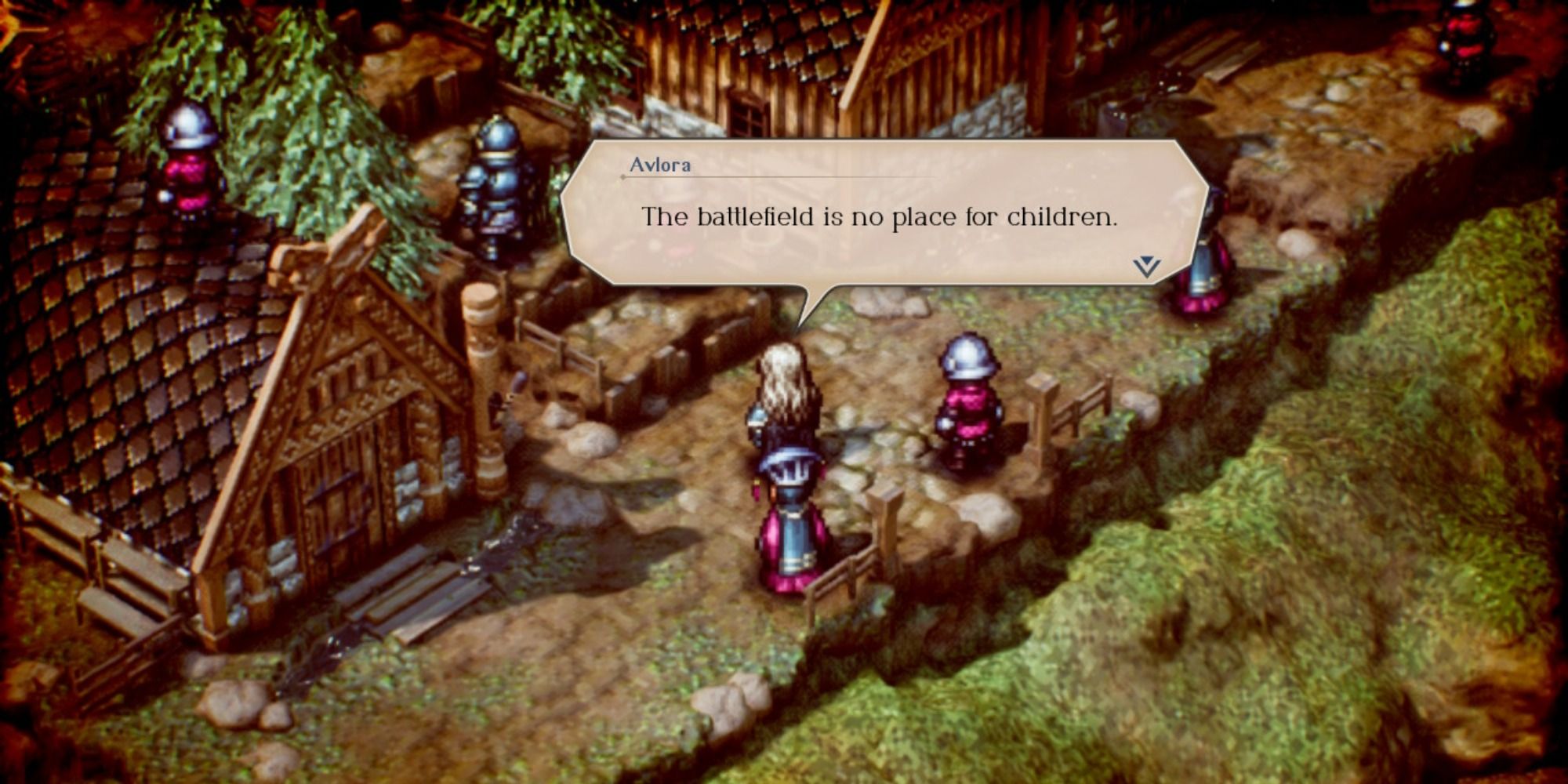 This is probably the hardest battle that you can take on at this point, and it's not only because of Avlora and her towering strength. While you do have the option of using those hawk statue traps to make the fight a little easier, there is something you should know if you're going for a perfect playthrough of the game:

With that said, get ready for a tough fight either way. We recommend stocking up on recovery items and if you don't have Corentin or Narve, Icestones from the Merchant during the exploration event.

You should decide early on if you want to use the hawk statues or not as the majority of your foes start in the midst of one. 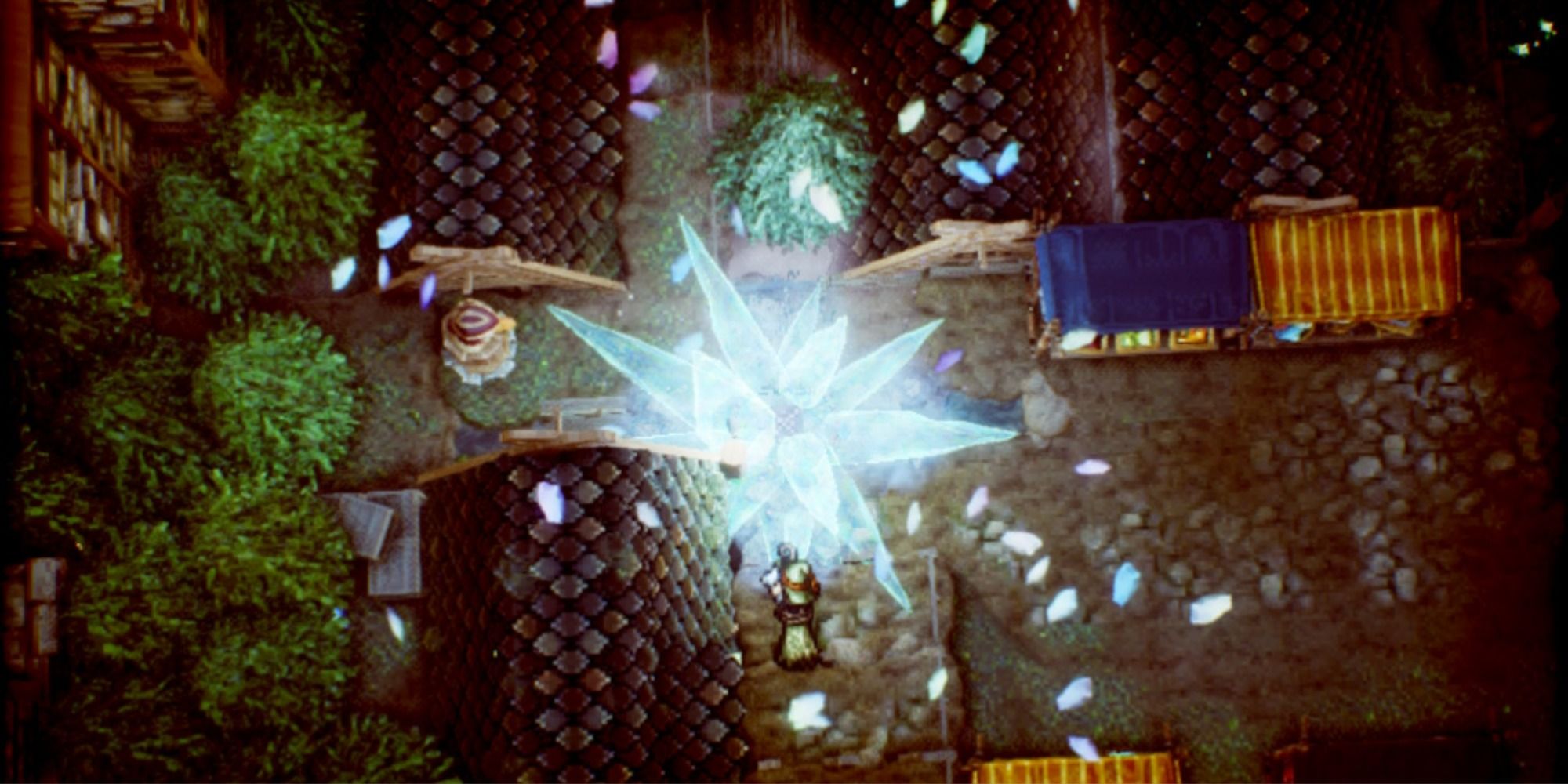 A few of the optional characters shine really well in this battle. Of note is Narve, the young mage – his Icy Breath spell can be used to cover large areas of ground in ice, which will slow down your enemies' advance. Use this to collect your foes in one area and whittle them down quickly.

Hossabara is also a good unit here thanks to her area of effect healing skills. A lot of the fighting in this map takes place in the narrow streets between houses. 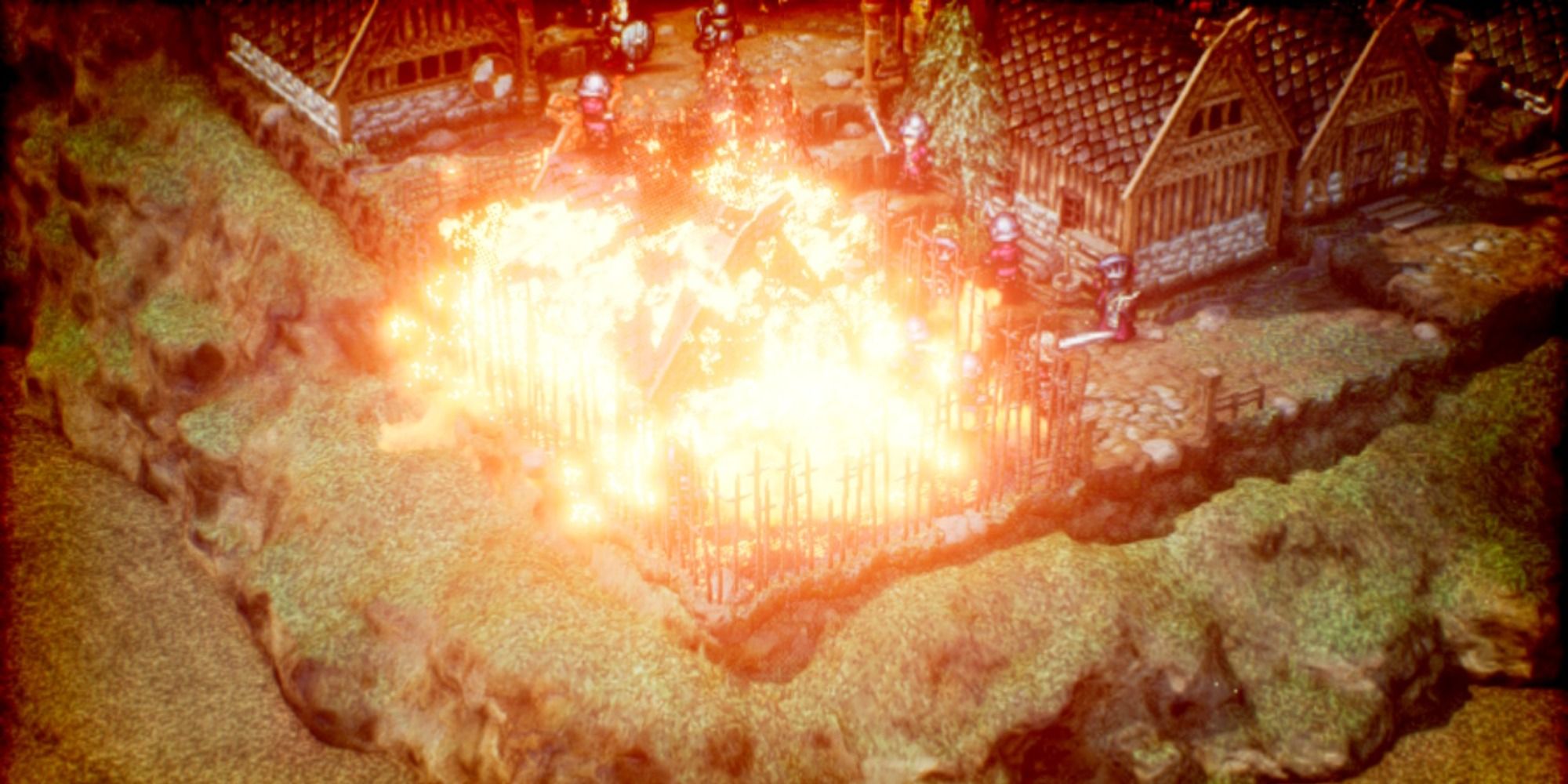 The hawk traps will instantly kill any soldiers caught in them, which will reduce the overall numbers on the field… until you realize that doing so will also make some reinforcements arrive earlier than they normally would.

That said, luring Avlora into one of the traps is the easiest way to deal with her. She's extremely tough to beat otherwise.

If you do not activate the traps, the reinforcements will still arrive, but you'll have more time to prepare and set up the field however you want. It's for this reason that it's probably easier to take on this battle without using the hawk statues unless you can use one of them to finish Avlora off without fighting her normally. 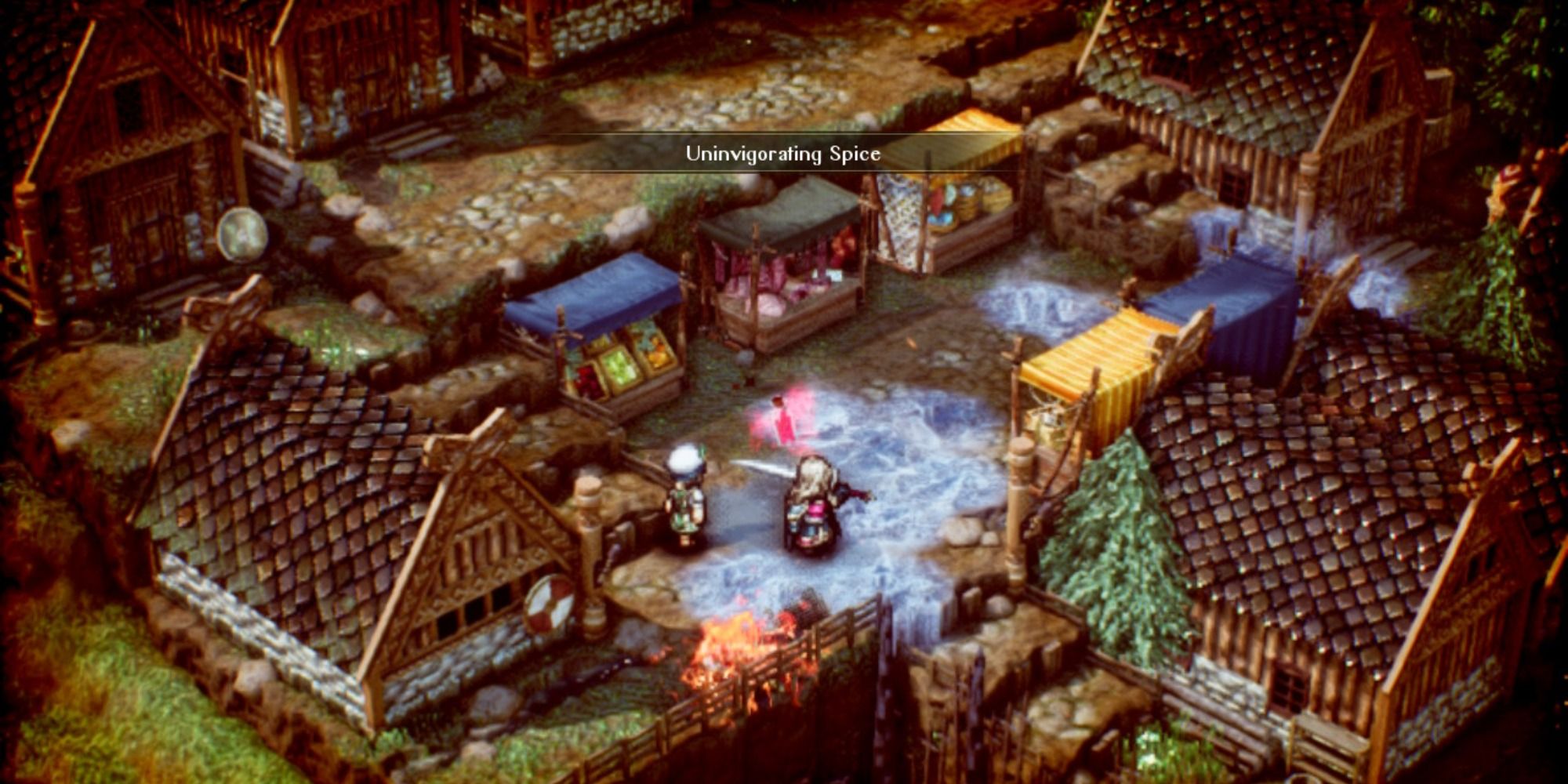 If you have an Uninvigorating Spice, it would be a good idea to chuck it at Avlora. Even with the damage reduction, she will be a very tough cookie to crack. Not only does she have an accessory equipped that makes her immune to status ailments, but her Desperate Strike passive makes her even stronger when she's below 50 percent HP.

If you decide to take her on normally, a good strategy is to surround her with your bulkier units so that she can't move. Keep the surrounding units healed and strike at Avlora with your ranged characters. You might lose a few in the process, but you should have enough firepower to beat her. 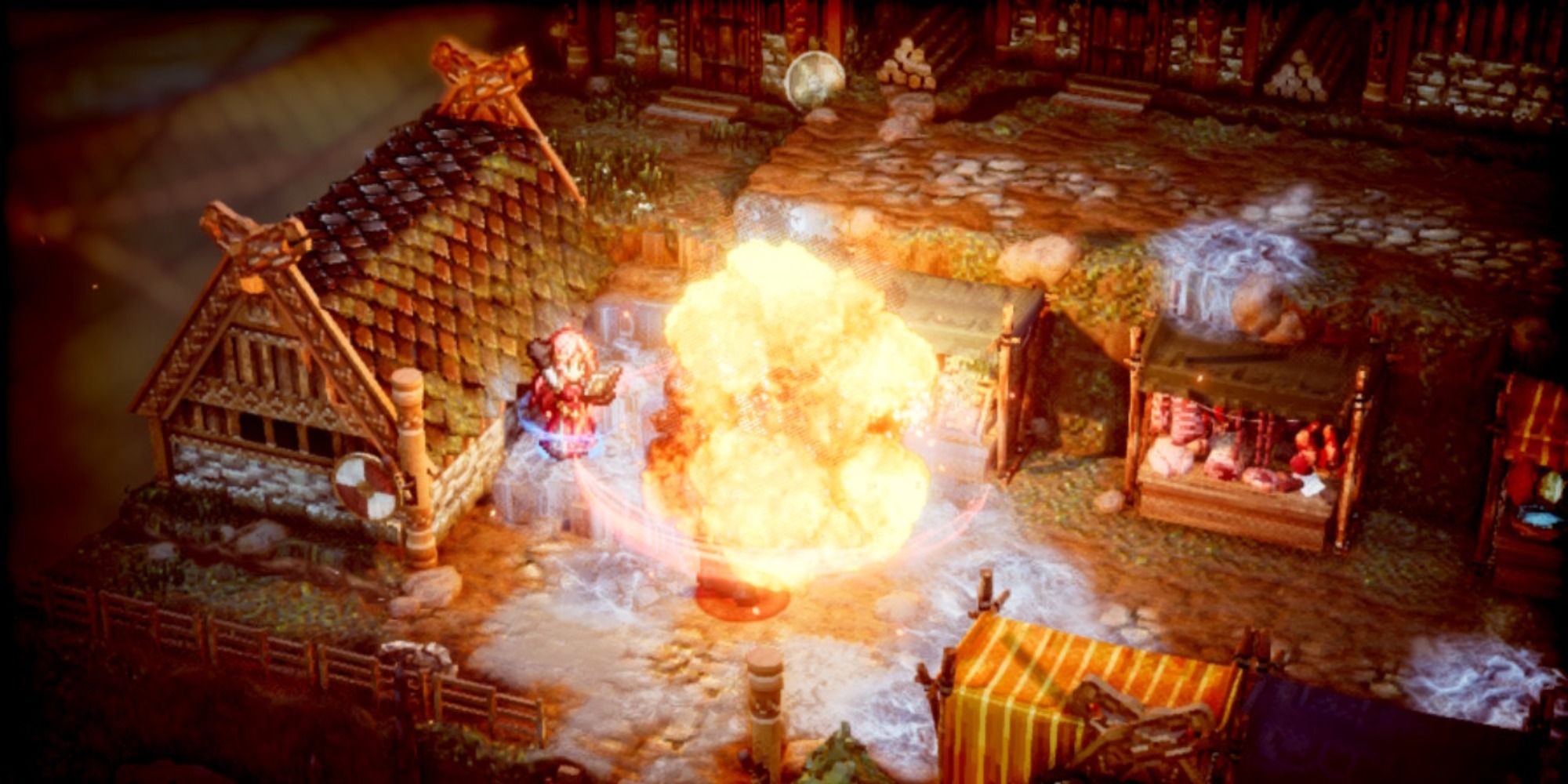 Frederica is once again the MVP of the battle if you use her well. You should definitely invest in her weapon upgrade that boosts her fire damage when there are clear skies. She will be one-shotting or severely damaging most enemies with even Scorch, let alone Blazing Chains in this battle. She will also be capable of dealing the most damage to Avlora with the latter skill.

If you have Julio recruited, it's a smart idea to keep him near Frederica, topping her off with TP when she needs it. 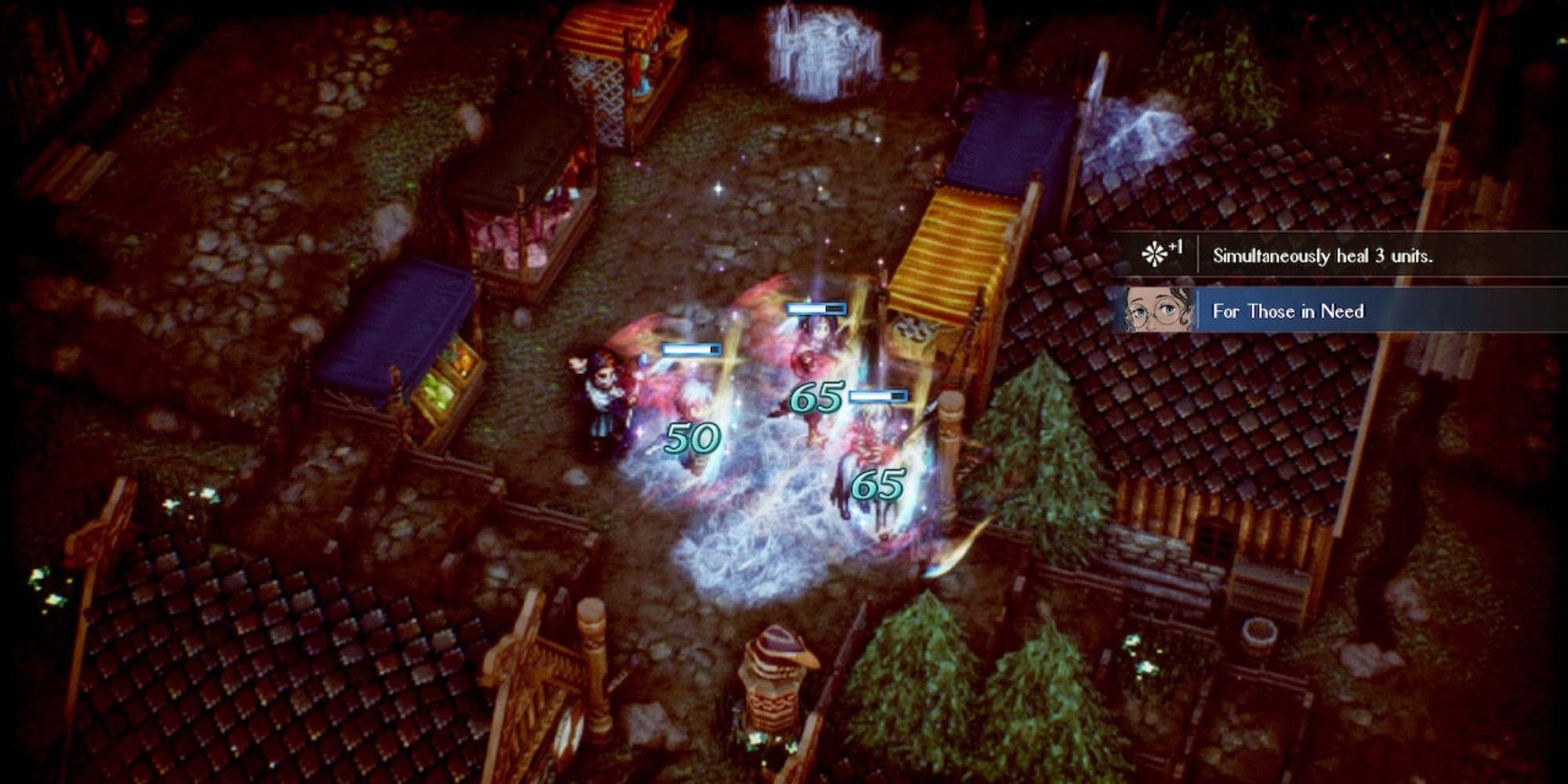 The key to winning this battle without taking too many casualties and risking being overwhelmed is to take it slow and steady. Don't be tempted to rush Avlora or set Erador in the middle of the map to draw fire – you'll get surrounded and bested. Instead, advance slowly and heal whenever you can.

It is also possible to cheese this entire battle with Hughette. Once you've defeated the Aesfrosti Bowmen and Battlemages, set Hughette up on the roof of a house that normal characters cannot reach. She can spend the entire battle shooting her foes knowing that they'll never be able to reach her. It's cheesy, but it works.

Once the battle is over, you'll get your spoils.

Silvio learns of the Wolffort victory and decides to send a bird. To whom? We'll find out shortly.

Landroi also learns the news, but he's a lot more joyous about it.

Side Story: Citadel Of The Sands

Amidst talk of post-battle medical aid and reconstruction work, Benedict bends Serenoa's ear and discusses what their next steps should be. He sets his sights on Hyzante and shares his concerns over Telliore and Falkes.