In my experience, The Legend of Zelda: Twilight Princess’ once-warm reception has chilled somewhat over the years. Praised at launch as a beautiful return to form after the “childish” art style of its direct predecessor, the world eagerly embraced a game that more closely followed Ocarina of Time’s famous structure and plot cues. Perhaps most alluringly of all, the grandeur and sheer scope of this reimagined Hyrule Field wowed millions of us.

Jade King recently wrote a fantastic feature on why that once-derided direct predecessor has weathered the years far more gracefully. Wind Waker’s cartoon-like visuals have aged like fine wine, and its structural deviations from Ocarina of Time are now celebrated. And while I’m sure its incredible Great Sea setting had its fans from the get-go, it was commonplace back in the day to criticize it as irritating to navigate and write it off for “too much water.” (That meme was never funny, but here I am, referencing it, anyway.)

I don’t contest the rationale behind this fandom opinion paradigm shift. More often than not, video games that chase realistic art styles aren’t going to age as well. And yes, the Great Sea is technically a seemingly endless array of blue, but it’s home to so many memorable island locales, each of them gorgeous and clearly crafted with care. 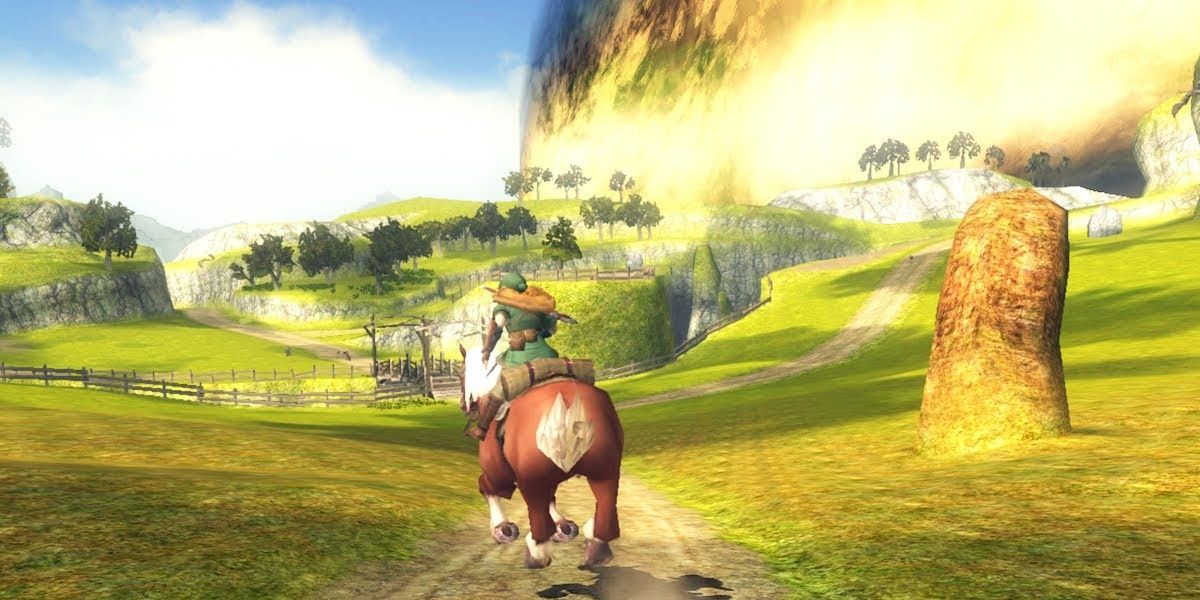 Twilight Princess' Hyrule Field, on the other hand, is a big thing that forks into narrower things that each lead to other things. It’s little more than a means to an end, peppered with Heart Pieces but covered in the same green splotches of grass. Or, in certain areas, tan splotches of sand and stone. Bland dirt roads and simple wooden bridges connect one samey pocket to the next. Contrasting it with, say, Breath of the Wild, where most slopes lead to fun discoveries, most forests to fresh adventure, everything in Twilight Princess is just kind of there.

I’ve always been a firm believer in the strength of negative space in game design. Breath of the Wild is my favorite video game, mind you, but the notion that a world must be stuffed with content lest it become tedious and trite has never sat well with me. When I ride across Hyrule Field on horseback with Link’s beloved steed, I am grateful for the so-called nothingness. This is a vast zone that is built around Epona, really; if full-on galloping got me from one location to the next in ten seconds, I would never find cause to hop aboard her saddle in the first place. 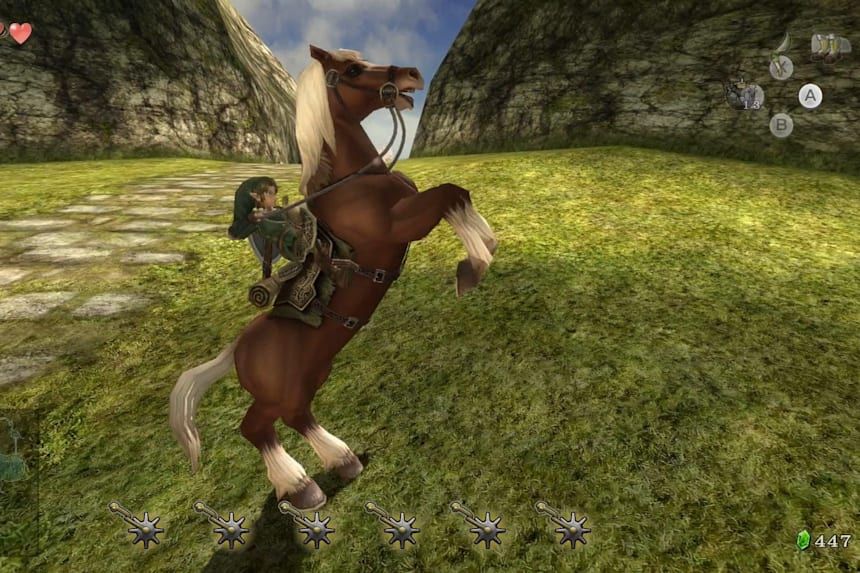 Don’t get me wrong, I wouldn’t be opposed to a massive makeover. It would be great if the green splotches sprouted visible vegetation and the tan splotches showcased windswept rocks and muddy reservoirs. But I don’t think about that stuff when I’m roaming the great expanse. Most roads and bridges may be simple, but they’re hardly overused — what we’re seeing here is what Hyrulean society looked like when it was calm, before the storm that sets Twilight Princess’ events in motion.

If there is one thing about Hyrule Field I still see praised on the regular, it’s the Bridge of Eldin. Lengthy and clearly designed to stand out from the sameness of its surroundings, with a dreadfully steep drop underneath, this series-famous landmark was designed with a certain spectacular set piece in mind, and it delivered in spades. 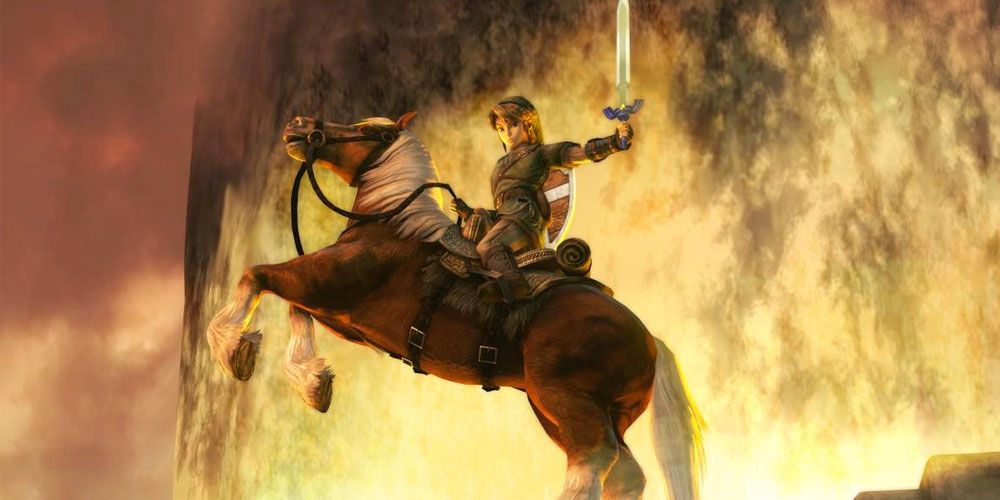 Less frequently cited is the stunning sepia sky surrounding Hyrule Castle, a constant indication that all is not well, a blatant and harrowing reminder of why that aforementioned calm became a storm. The striking golden shades of the castle’s atmosphere add another layer of intrigue, as its silhouette always punctures its eerie environment to serve as an expression of its kingdom’s doom.

Perhaps my own perennial wanderlust is to blame for my unrelenting love of the boring, empty, and excellent Twilight Princess overworld. Nothing thrills me more in life than the chance to explore a new patch of nature. Nothing saddens me more than the knowledge that so much of our planet’s wilderness is gone, and so much of what is left is well on its way toward extinction. If I could lose myself in an enchanted forest, crossing gentle streams and listening to lovely birdsong — and if I somehow had enough provisions to ensure I probably wouldn’t die in the process — to me, that’s paradise. 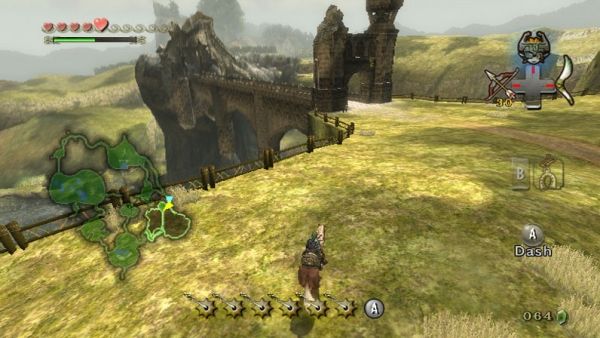 The Legend of Zelda: Twilight Princess' Hyrule Field is too small for that sort of feeling. As Jade pointed out is the case with Wind Waker’s Great Sea, in reality, Hyrule Field is not nearly so vast as it seems. Nor does Hyrule Field manage to seem quite so endless as the Great Sea, as lovely oceanic horizons are replaced by mountainous stretches with obvious “do not pass” implications.

That doesn’t mean it isn’t great. It’s big enough to get its point across, and it leaves me breathless with the sense of an epic quest to become the hero Hyrule needs. Its sweeping daytime music and dulcet nighttime tunes set the tone, its width sets the pace, and its emptiness is its own ambiance. I wouldn’t change a thing about this fame-faded place.