The HM Treasury has tried to get hip and down with the kids by opening a Discord, but it was immediately flooded with LGBTQ+ flags, Irish flags, and people calling Jeremy Hunt a cunt.

If you're overseas or just don't follow politics, Hunt is the new chancellor who previously ran to be the Tory party leader. He took over the NHS in 2012 and, in that time, everything got significantly worse with cancer referral times increasing and the "Winter Crises" becoming the worst on record. He even pitched ideas like not letting people walk up to A&E, the place where people walk up to if they're in an emergency. Makes sense, eh?

So, the HM Treasury decided to branch out to the younger demographic, the ones who, by and large, hate the Tories, inviting them into a direct dialogue. It's gone about as well as you'd expect. It made a specific news channel announcing Jeremy Hunt as the Chancellor of the Exchequer which got mostly clown emojis, trans emojis, the letters 'C', 'U', 'N', and 'T', and a bunch of middle fingers. 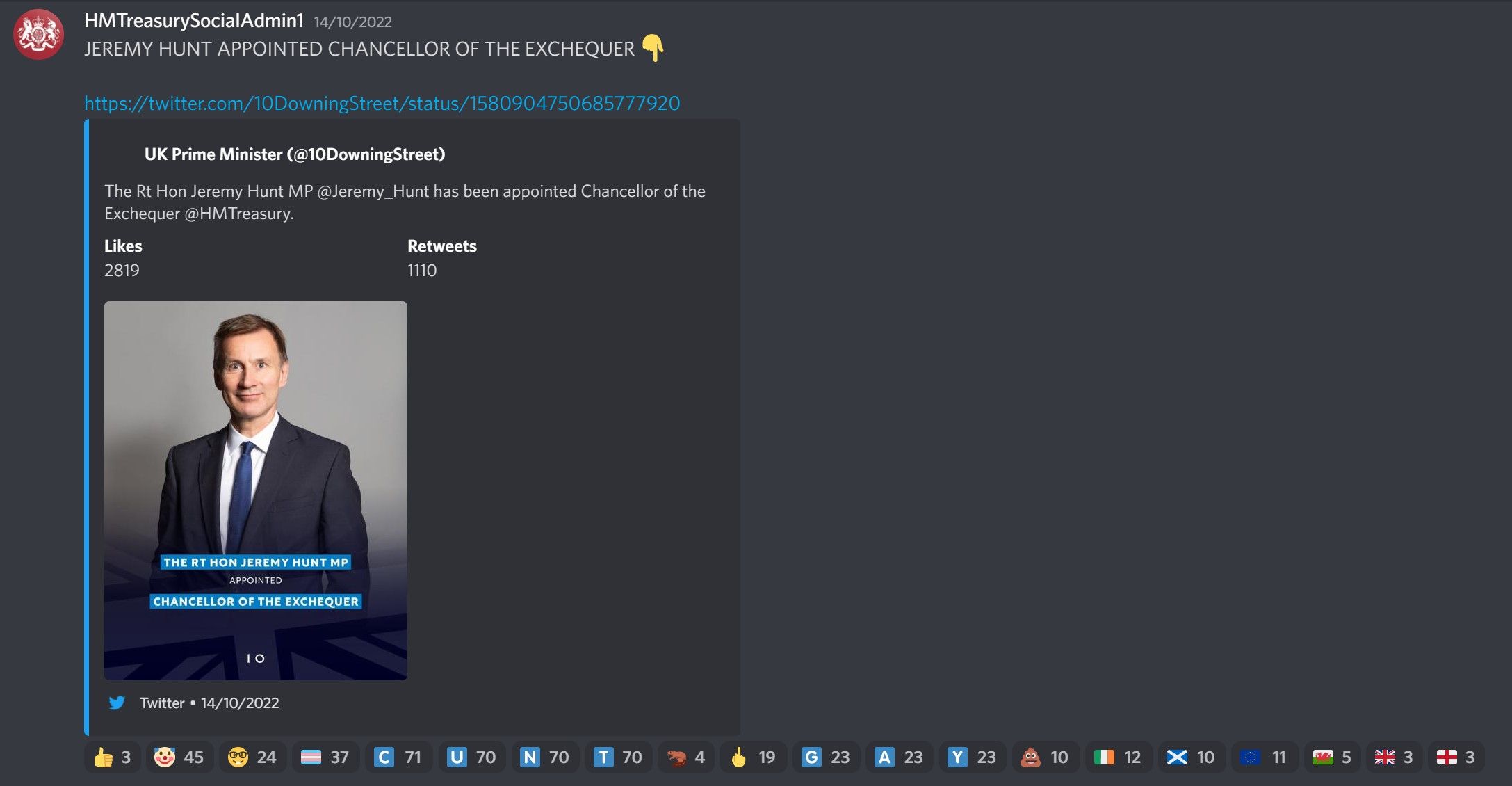 If you look at the "welcome-to-the-server" channel, you'll see that practically every new member is met with trans, Scottish, and Irish emojis, as the very demographics the Tories oppress and belittle are banding together to literally (or digitally?) stick up the middle finger.

It's only been active for a day now but it's clear that this hasn't gone exactly how the HM Treasury intended. There are people changing their nicknames to 'VOTE LABOUR', and spamming the sidebar with their messages. That's because it's a read-only server, meaning that all comments and discussions are disabled. Nothing says Tory like preemptively shutting down people's voices.

This is, admittedly, the only good bit of foresight. It's chaos as is with emojis and nicknames, but it'd be ten times worse (read: better) with open discussions, as it would, if the rest of the server is anything to go by, quickly descend into pro-Labour, fuck the Tory dialogue. And we can't be having that.

Right now, there are over 300 members and that number is rapidly growing as people continue to join, but beyond the use of emojis to tell the HM Treasury to do one, it's a pretty dead server. There's only one active channel, #hm-treasury-news, but it only has two posts. The second is about Jeremy Hunt's response to the Labour market statistics from the ONS, which was met with emojis spelling out, you guessed it, cunt.

There are also EU flags, sweat and thirst emojis, and, of course, clowns. Hunt is clearly popular with Discord users.