Ultimate Marvel vs. Capcom 3 allows for thousands of different team combinations. With 50 characters, each with their own unique move-set and three variations on their assists, there’s a lot to experiment with. Whether you like to rush-down or zone, you can find someone to fit your play style.

With so many available, it’s hard to know where to start. Worse yet, it can be hard to find where to go next. You may find your perfect character, but they may work well with your second-best character. Sometimes you have to build your team around the point character or anchor, and you need a shell to compliment them.

X denotes a free slot, and we've added a recommendation where possible. 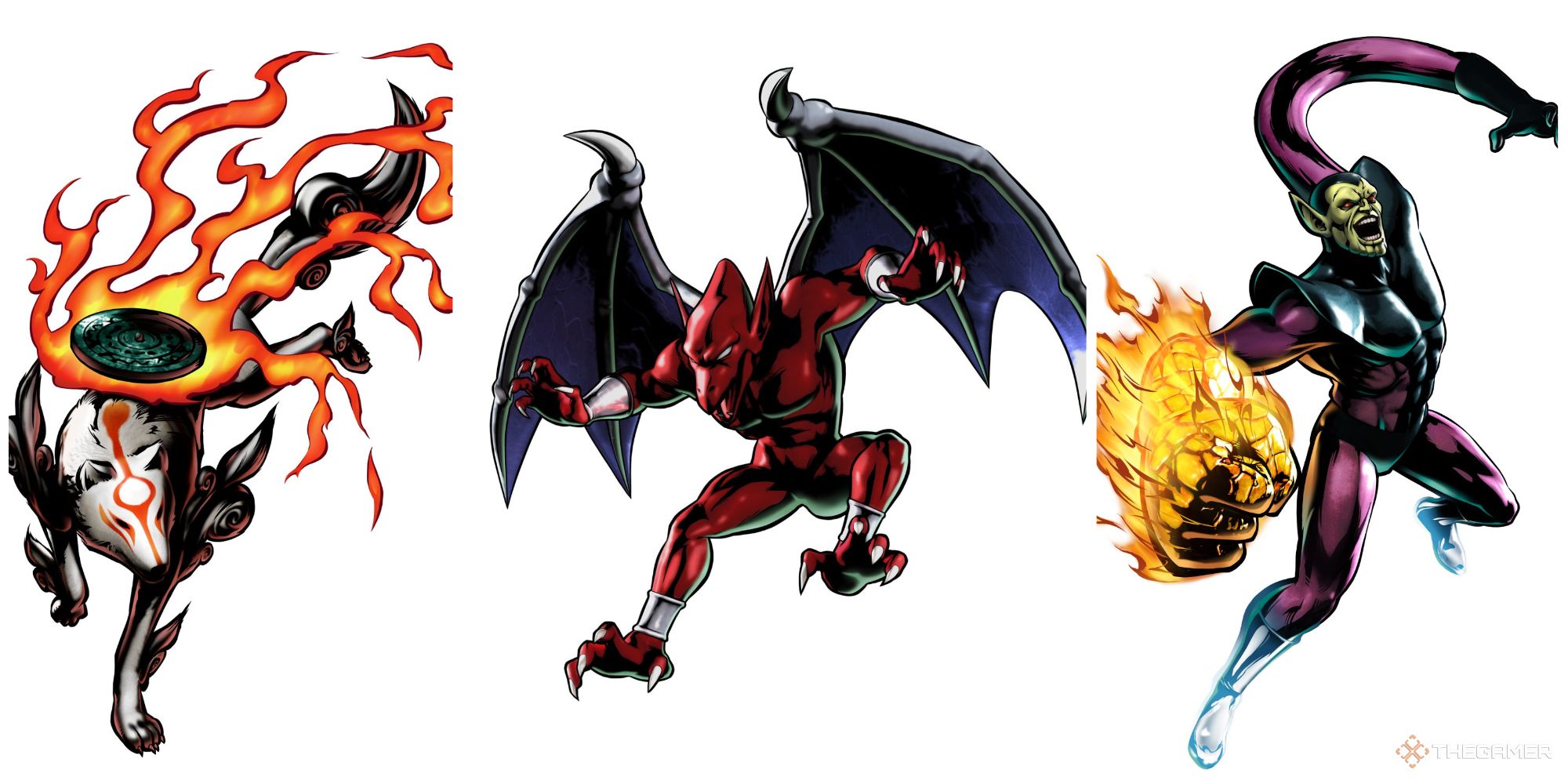 One touch is all you need. Team 300 Percent utilizes a lock-down assist to charge up the heavy version of Demon Missile. Fully charging this move makes it unblockable, meaning that you can quickly end the game once you get the loop going.

The characters best used for this are Super Skrull and his Tenderizer assist as well as Amaterasu and her Cold Star assist. Upon defeating an opponent or snapping them back, and calling your assist, your opponent has to watch helplessly as their life bar drains. 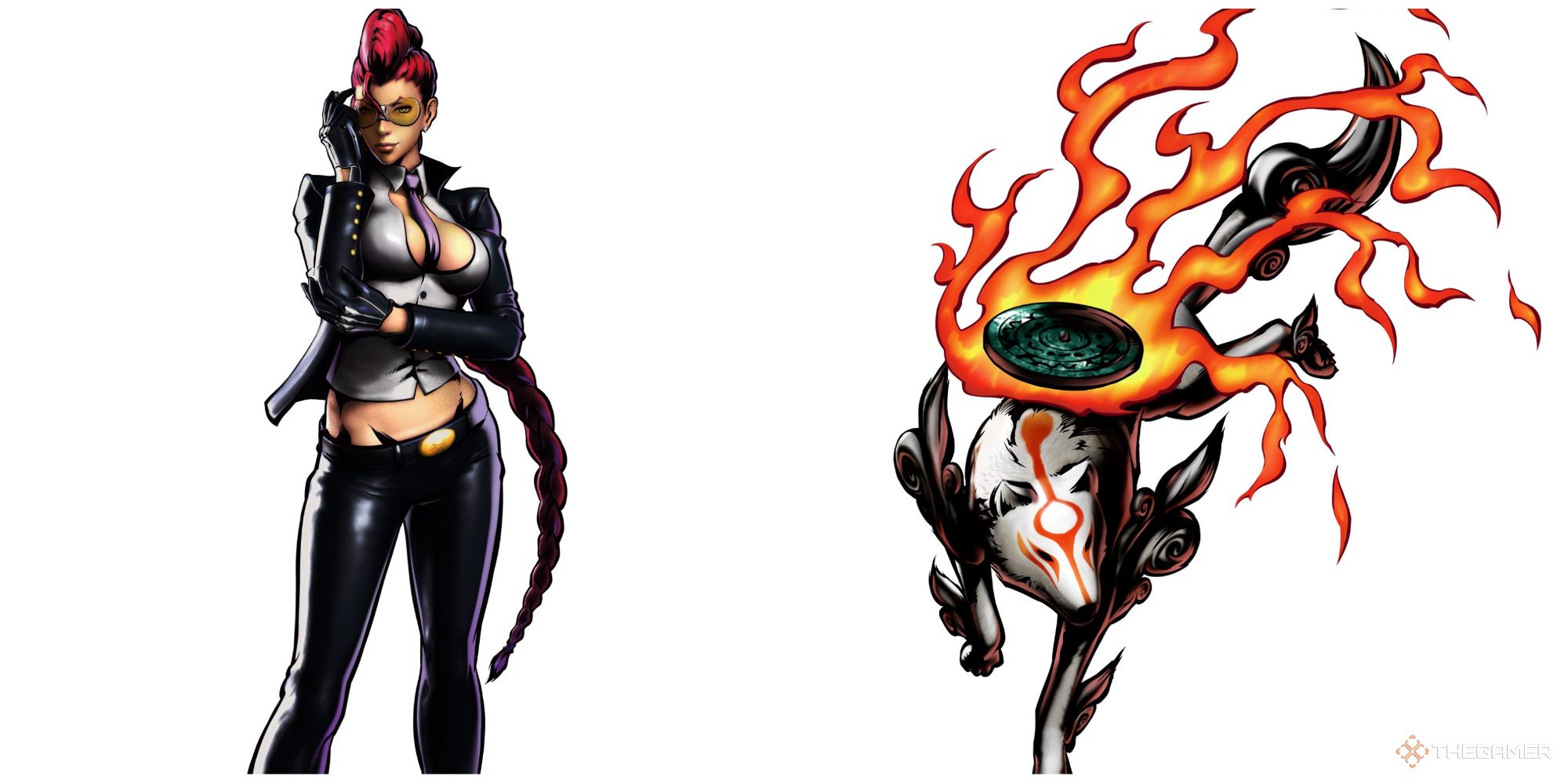 C. Viper has one of the most impressive kits in the game. She’s able to use bars of meter to enhance her special moves, allowing for extended combos, pressure, punishes, and more. Coupled with her mobility, she’s a great point character.

But, with the right assists, she becomes monstrous. Viper/Amaterasu allows you to charge her focus attack on incoming opponents to unlock her unblockable attack. Add in an anchor like Strider Hiryu who both covers jumping opponents and extends her combos, and you’ve got a strong setup. 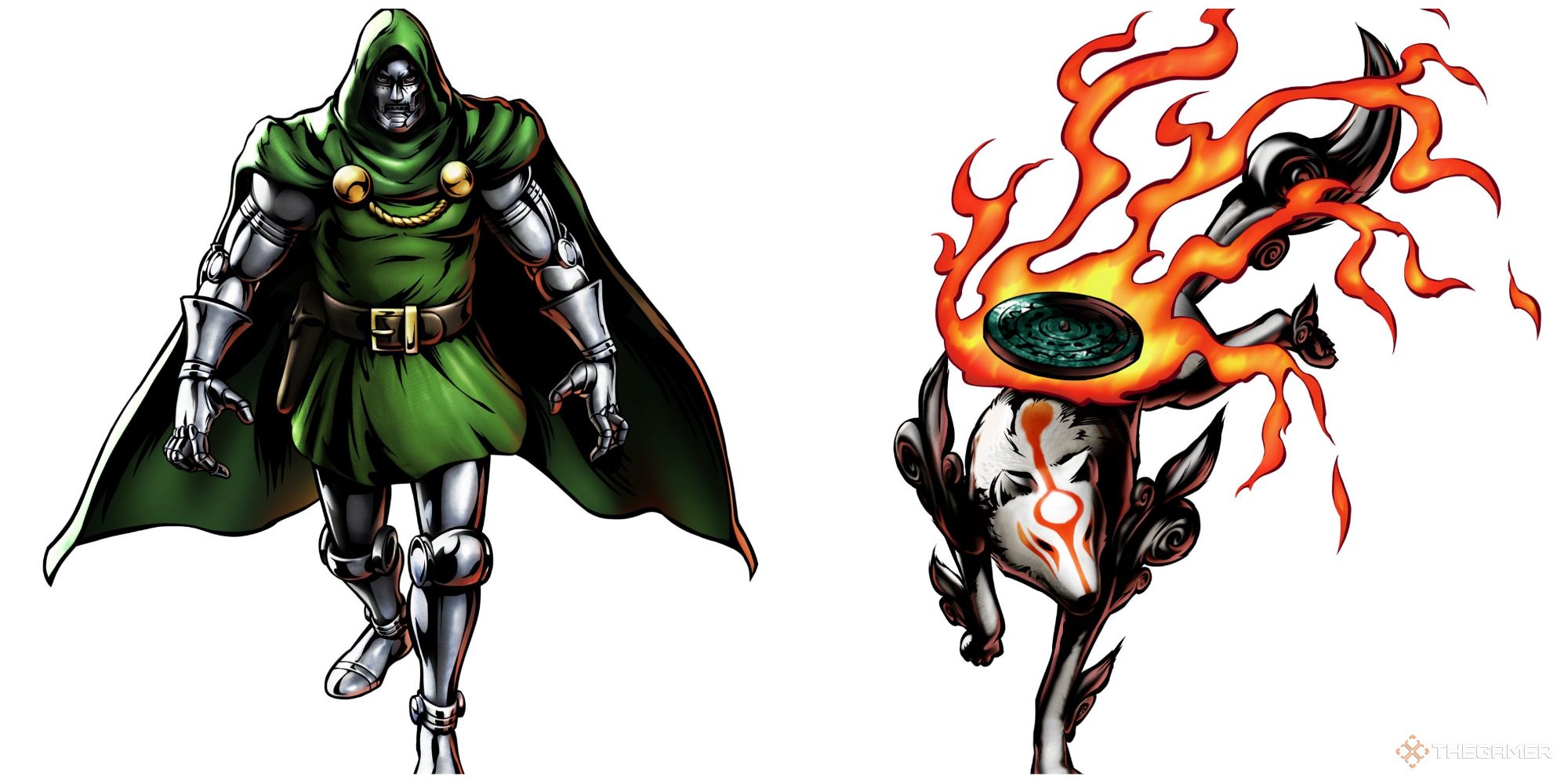 Doom/Amaterasu as a shell is strongest when you have two meters. Using a team hyper combo while you have Doom on point allows his hyper combo to pair with Okami Shuffle, which has a long duration. This allows you to lock opponents down while Doom is free to move around and mix the opponent up or apply pressure.

Add a strong point character that pairs well with Doom, like Morrigan or Magneto, and you can have two strong shells. While the point character whittles the opponent's health bar down, they're building meter for the Doom/Ammy shell. 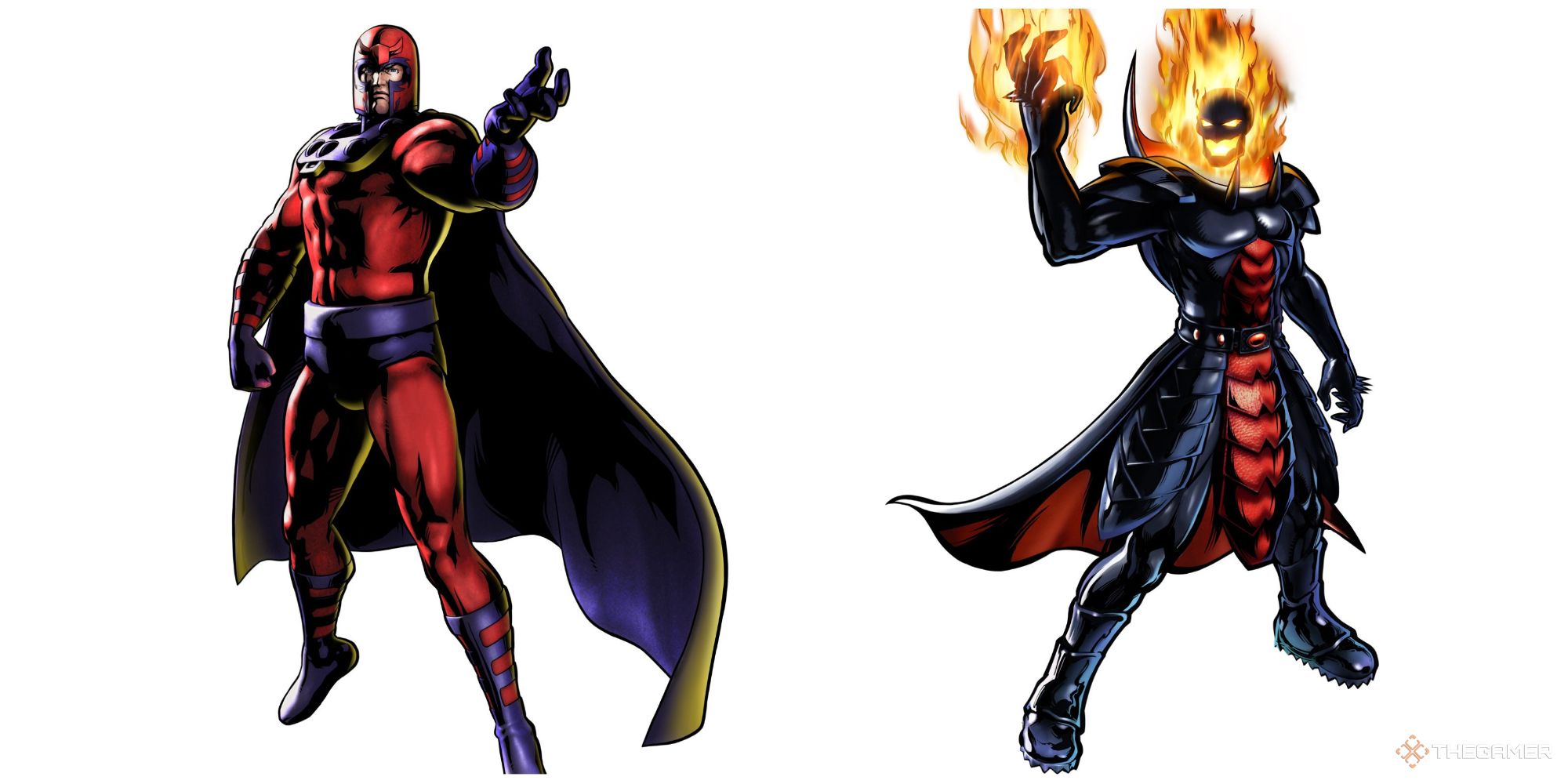 While Magneto is great at opening characters up, he's not the easiest to get a kill on his own. Coupled with his combo routes, it can be hard to use a delayed hyper-combo to bring in your second character to take out the opponent.

Dormammu has no problems with this thanks to Stalking Flare, which not only tracks the opponent but can allow Magneto to tag in and mix the opponent up. It’s a shell that can work with either one on point, so you never have to worry about messing up the synergy. 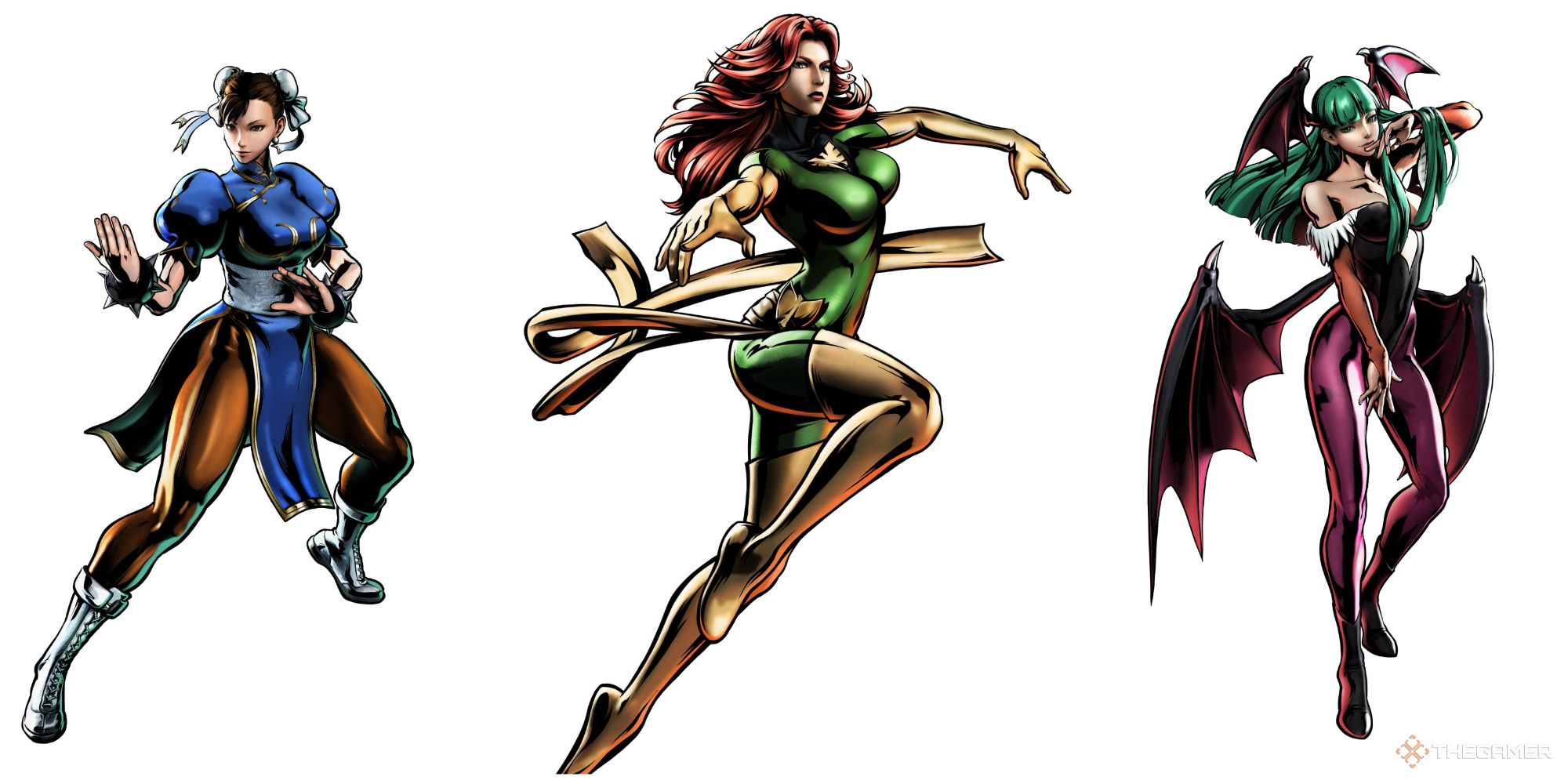 Phoenix is one of the strongest anchors in the game thanks to her Dark Phoenix form. Getting there requires a lot of work and can run counter-intuitive to defeating an opponent’s character. It’s hard to get a kill when you’re trying to save all your meter for Phoenix.

That’s where meter-build teams come in. Several characters, like Morrigan and Amaterasu, have assists whose sole purpose is to give you meter. Coupling with a mobile character like Chun-Li or Magneto allows you to build five bars consistently and easily. 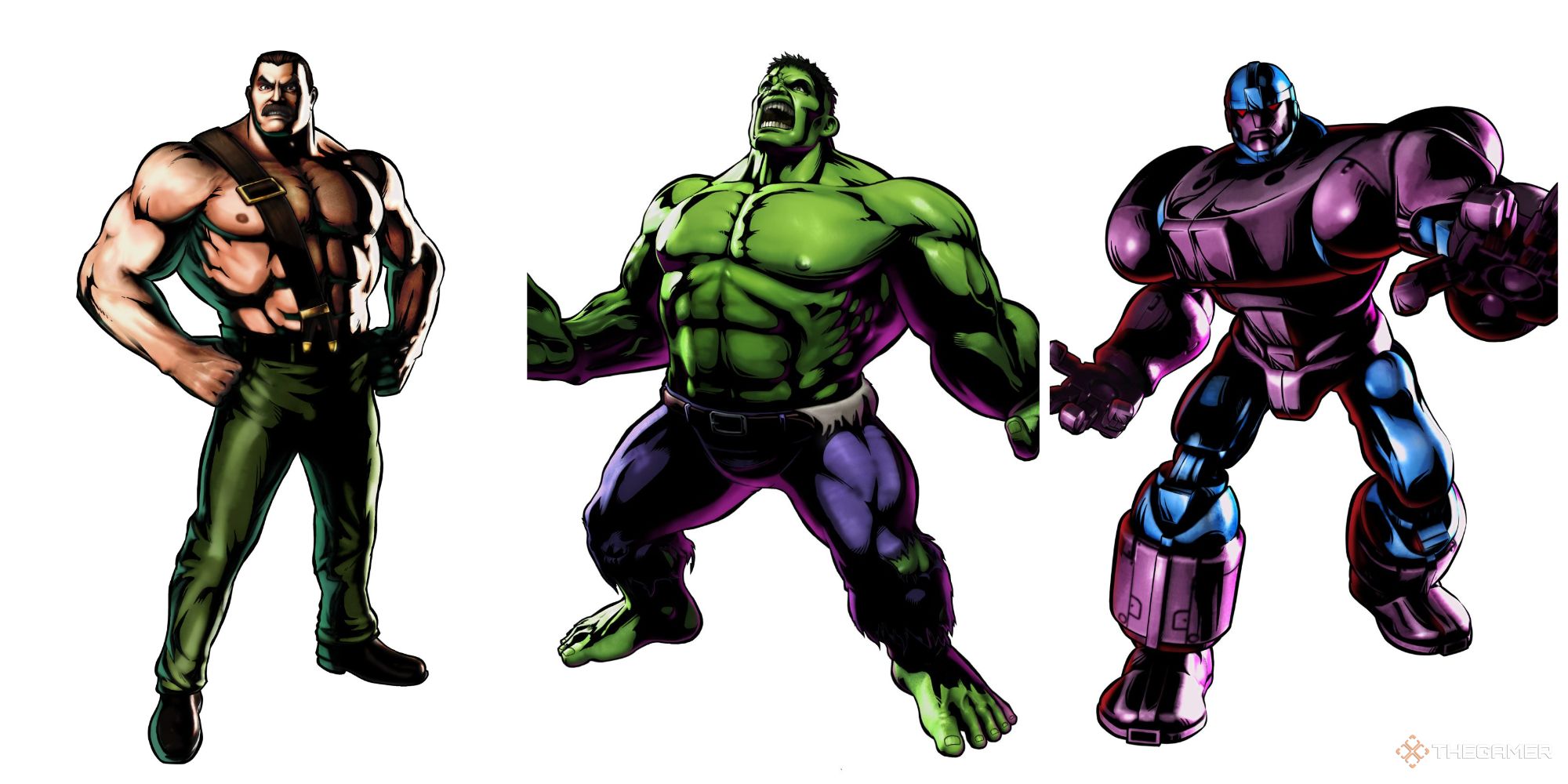 Hulk, Haggar, and Sentinel are beefy boys who pack a punch, but they all have their own weaknesses that limit them as characters. Thankfully, they all fit together neatly, as Hulk benefits greatly from Haggar’s lariat in terms of combo and pressure. In turn, Sentinel’s drones are one of the best assists for Haggar, covering a lot of the screen for a long time.

The odd man — or robot — out is Sentinel. Having him as your anchor character isn’t a bad choice, however, as he has a lot of tools to beat opponents quickly. With his super armor normals, good projectiles, and great assist for both of the other characters, he fits in well with this team. 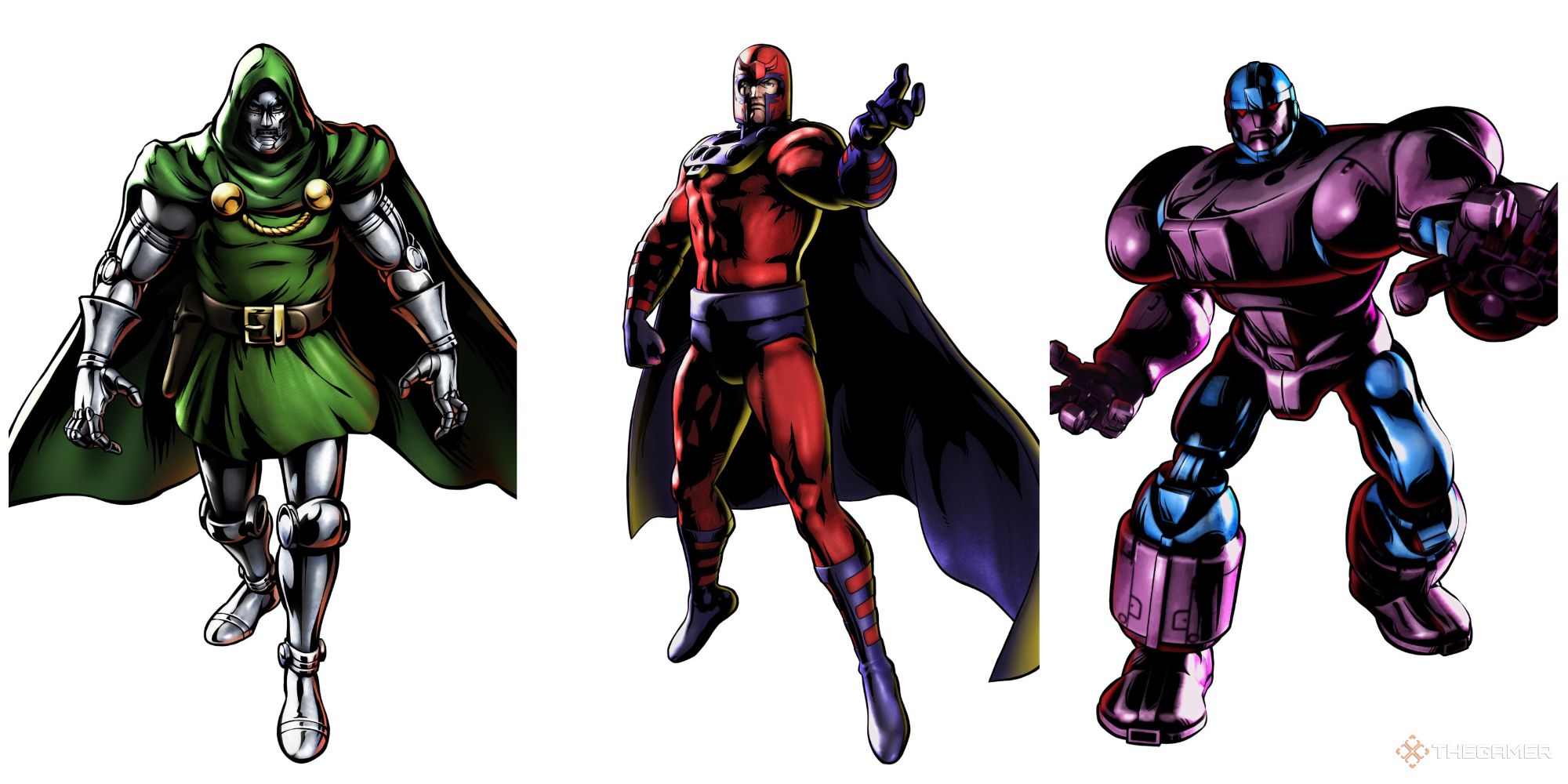 Doom and Sentinel provide Magneto with different ways to play the game, open players up, and convert assists into full combos. You can play defensively by zoning with Drones and/or Plasma Beam, or go heavily mixup-based by locking down the character with Hidden Missiles.

One of the biggest strengths is that this team works from any direction. So, if you lose Sentinel, the Doom/Magneto shell is still strong. All this is not to mention that they all have relatively easy infinites. 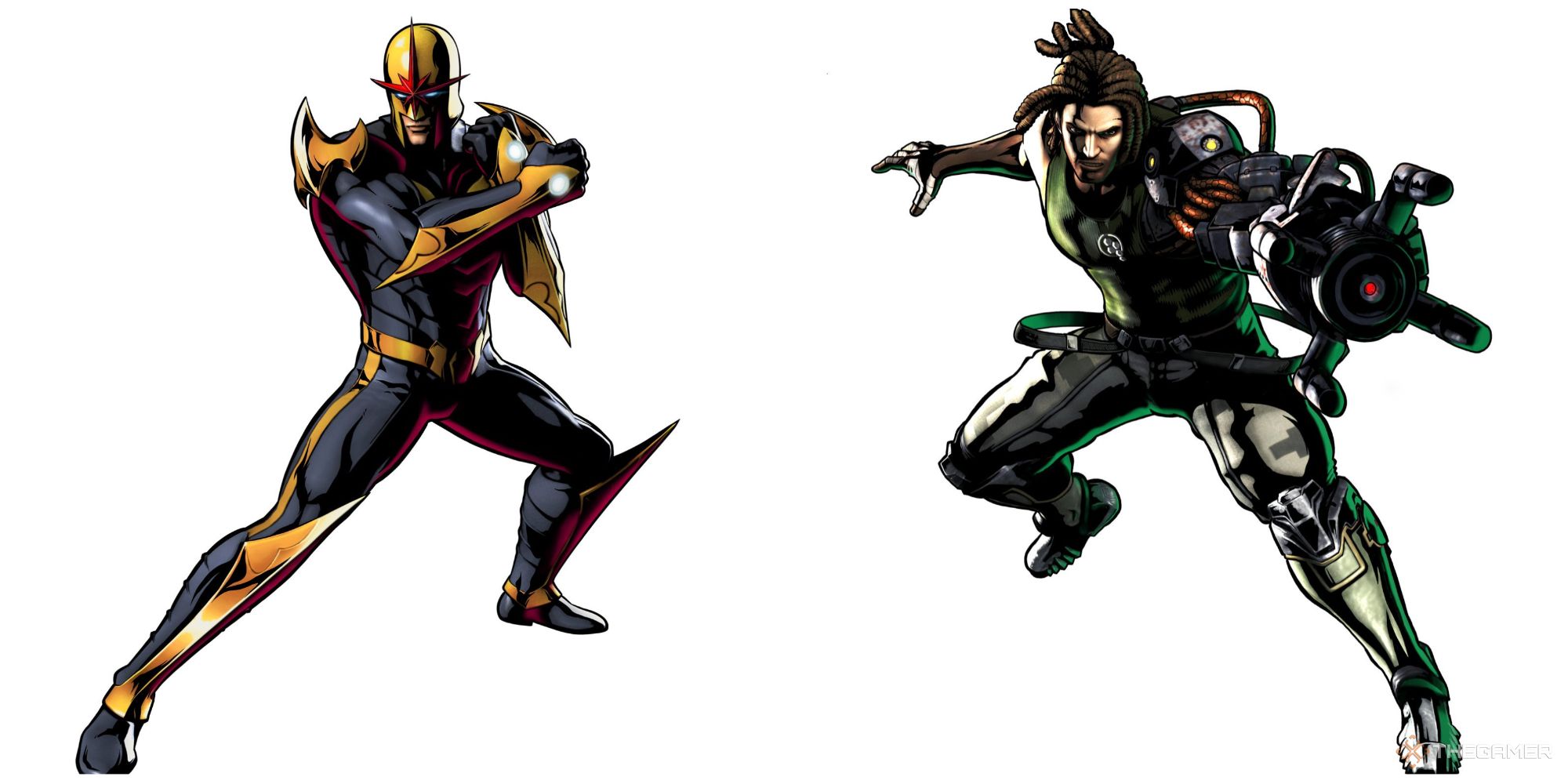 Nova, as a point, wasn’t used too often at Marvel’s peak. But, as the game and character developed, people came to realize how strong he was. Nova has great movement and damage, letting you turn an errant hit into big damage.

Where he truly shines is in the Spencer assist Wire Grapple (Slant Shot), which grounds an opponent in the air. This lets Nova use the high version of Nova Strike to crumple a grounded opponent and tag into another character. With just a standing light punch, Nova/Spencer can take out a character’s entire health bar. 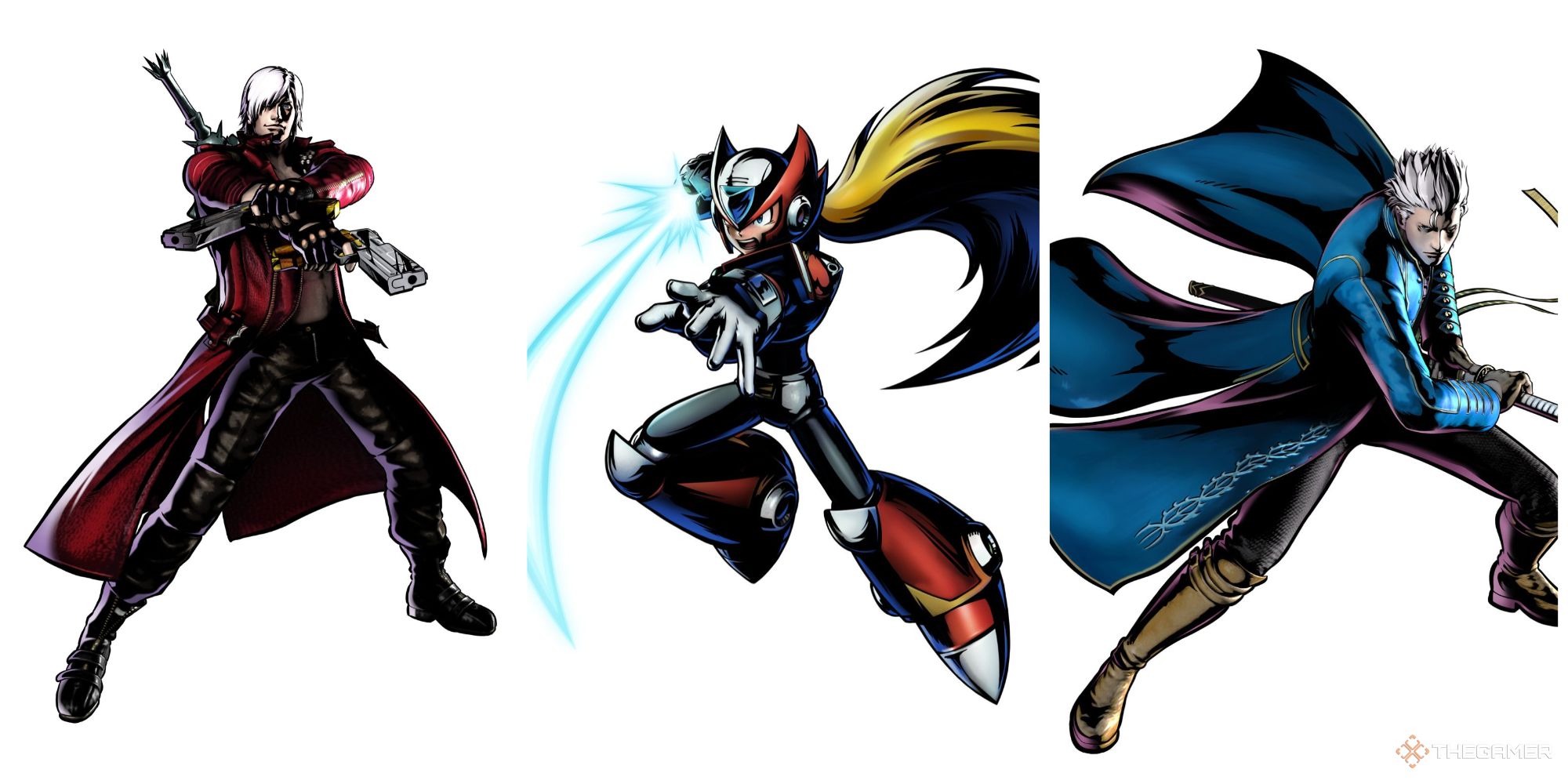 While there are several point characters that can do well with the sons of Sparda, Zero stands above them. Applying pressure from nearly anywhere on the screen, Zero is one of the stronger point characters. One of his weaknesses, however, comes from angled air attacks.

Enter Dante, whose Jam Session assist works both defensively by protecting Zero from an air assault, and offensively by locking opponents down. If it hits, it allows Zero a full combo into lightning loops. Then, even if you get past all of that, you have one of the strongest anchors in the game in Vergil. 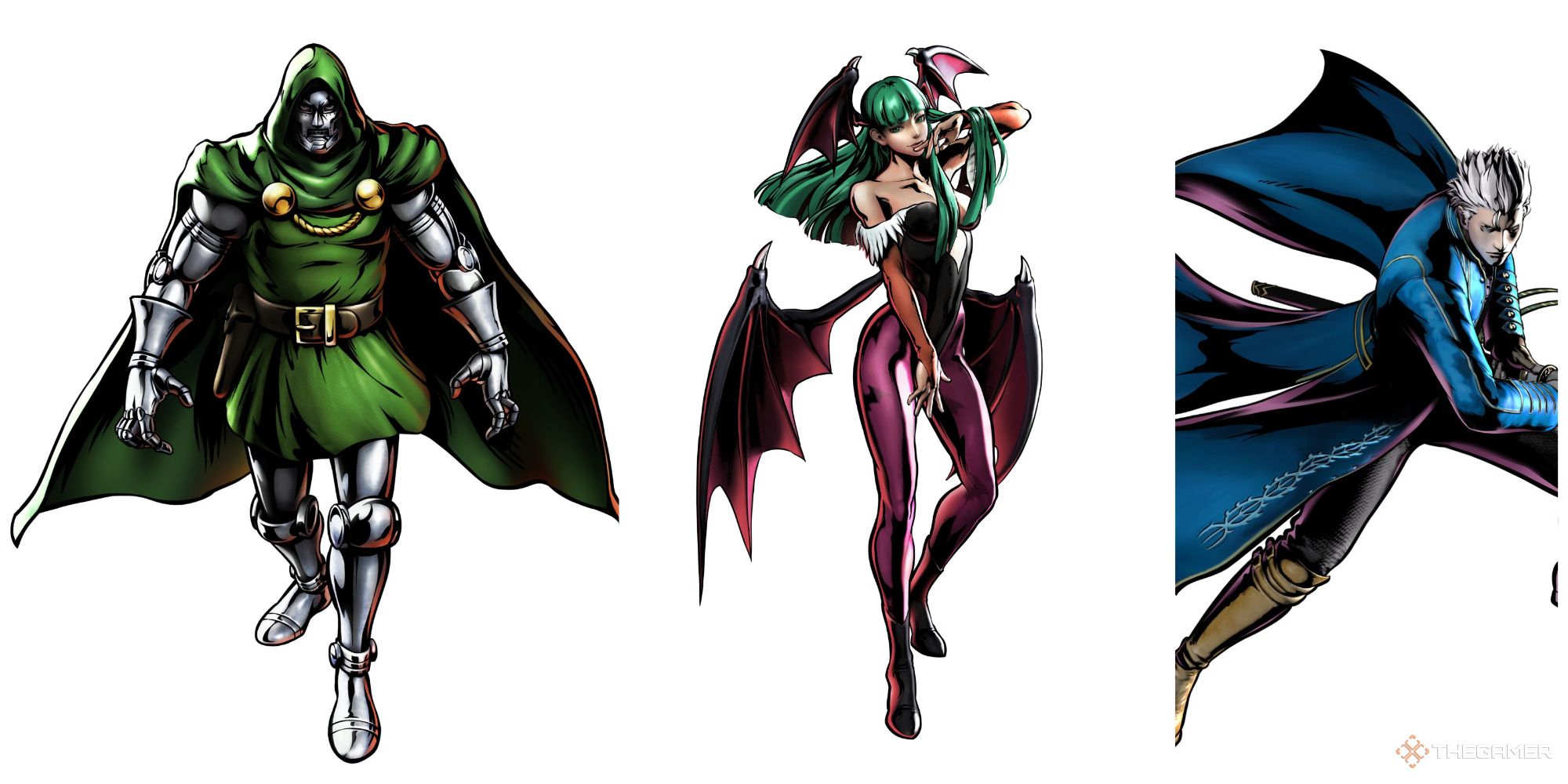 There are few stronger shells in UMvC3 than MorriDoom. Running Morrigan on point allows you to zone your opponent out with the combination of Astral Vision and Soul Fist. Dr, Doom compliments this with his Hidden Missiles assist, which covers the air in ways Soul Fist can’t alone.

The shell can be used with practically any strong anchor. The exception here is Phoenix, who might be an issue as you need meter to utilize Morrigan’s gameplan. But even Phoenix can be used with Morrigan’s meter drain Soul Fist, or giving meter to point Doom. The best anchor is Vergil, who helps Morrigan and Doom in neutral while still being a frightening anchor.