Many fans and journalists alike speculated that, at some point in WandaVision, Mephisto would crop up as the big bad finale, perhaps even the catalyst that would force Agatha Harkness and Wanda Maxiamoff into an alliance. However, that wasn’t on the tables, and it didn’t happen. Executive Producer Jac Schaeffer said that the show didn’t need a “big bad.”

“This is essentially what we envisioned from the very beginning,” he stated, “This was always going to be a story about grief, and we took that seriously, and it’s a little bit reductive, but we used the stages of grief to map out the arc of the season, and we knew what we wanted to take it to a place of acceptance

It is acceptance in two ways. It’s ultimately Wanda’s acceptance of the mantle of the Scarlet Witch, and then secondly and perhaps more importantly it is acceptance of her grief and of the fact that she has to let Vision and the boys go. So, you know, things changed along the way and there were discoveries and enhancements and all the sort of ins and outs of the finale specifically was kind of ever-shifting, but the actual goodbye scene was written fairly early on and we were all united behind it.” 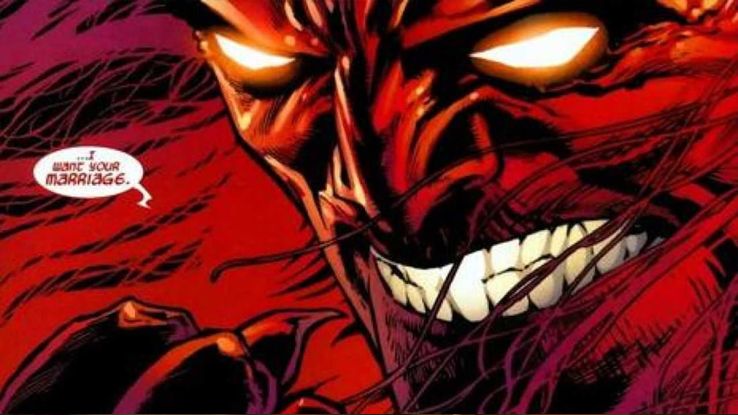 With grief being the focal point of WandaVision, there wasn’t room for Mephisto, “We didn’t think this series needed a big bad,” Schaeffer said, “I mean, the big bad is grief, you know, and that’s the story that we were telling, and then we got a bonus baddie in the form of Agatha Harkness who ended up facilitating Wanda’s therapy, so yeah, I think we feel pretty good about that.”

Despite the lack of Mephisto, there was a cut demon from the show. Señor Scratchy the bunny was originally set to be revealed as Agatha’s familiar, a hellish foe under the guise of a cute, cuddly rabbit. This was even filmed but got the chop all the same. At any rate, perhaps there’s room for Mephisto in future projects.