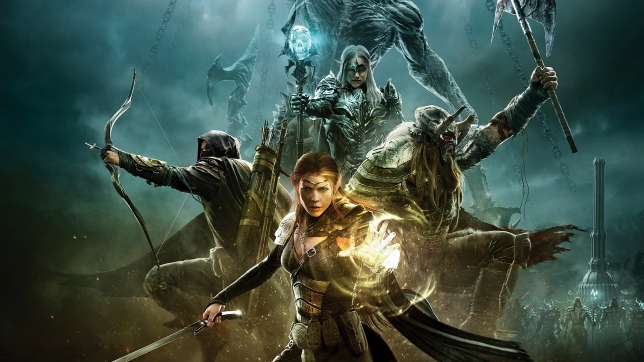 Readers discuss their favourite video game franchises that are over 25 years old and what they hope from them in the next gen.

The subject for this week’s Hot Topic was suggested by reader Grackle and is based on the fact that there are a lot of major series celebrating their 25th, 30th or even 40th anniversary this year. So we wanted to know which is your favourite franchise that’s at least 25 years old?

Unsurprisingly, Nintendo dominated a lot of the answers, thanks to Mario and Zelda, but no more so than The Elder Scrolls, which many may not realise is due to celebrate its 27th anniversary next month.

Uncertain future
I would probably say The Elder Scrolls for my favourite retro video game franchise, just on the basis that all the mainline entries have been more or less brilliant (for their time at least).

Every entry has been really ambitious, but each time the developers have more or less executed what they’ve been trying to do perfectly, and each title has pretty much set a new benchmark compared to what else was around at the time. Even with something like Super Mario or The Legend Of Zelda, which I also love, there’ve been mainline entries which haven’t quite been up to the quality of the rest of the series in my opinion (Super Mario Sunshine and Twilight Princess) but you can’t really level that criticism at The Elder Scrolls.

In terms of the future of the series I’ve got just as many fears as hopes. Bethesda have been a disappointment for the last 10 years, everything they’ve done smacks of poor leadership and indecisiveness – hopefully Microsoft will steady the ship now, but they’ve hardly been knocking it out of the park themselves in recent years.

The longer The Elder Scrolls 6 stays in development the more I worry about how it’s going to turn out. Don’t rush it by all means, but these long periods of radio silence often tend to spell trouble. I’m not sure Bethesda have it in them to produce a best-in-class, envelope-pushing title any more based on their recent record, and you know that there will have been voices at Bethesda and/or Microsoft asking the developers, ‘How are you going to get loot boxes into this? How are you going to turn this into a live service game?’ as that is just the nature of the industry at the moment.

So, yes, my submission has just turned into me whingeing about Bethesda but what a series The Elder Scrolls has been over the years and let’s hope we get a fitting follow-up at some point.
Charlie

The triumvirate of Zelda
There’s no way it can be anything other than The Legend Of Zelda for me. There are at least three occasions, vastly separated by time, gameplay, and technology, where a new Zelda game has been arguably the best game ever made, and even more where one is in the running for best of its platform or generation.

The consistency there in terms of quality and ambition is matched (enabled, really) by the consistent levels of talent and care that the series has been treated with for most of its 35 years.

Also, testament to Zelda’s status is that it’s not even obvious which three games I’d have competing for best ever, but I’d choose A Link To The Past, Ocarina Of Time, and Breath Of The Wild.

Even when you consider back-to-back releases, though, it’s also to its credit that so few Zelda games can be regarded as an outright replacement of any predecessor.

With that in mind, it’s exciting to think about what the Breath Of The Wild sequel might deliver, but as long as it maintains that Zelda spirit with its ambition, freedom, exploration, discovery, reward, atmosphere, charm, polish, ingenuity, and of course some element of reinvention, it’ll remain on top for at least another few years.
Panda

Mostly dead
On the basis that it isn’t a dead franchise because there was a slot machine released in Japan in September 2011, and there was recently a Mii skin in Smash Bros. I would say Goemon/Mystical Ninja. I’ve droned on previously about how much I love these games, they are a fantastic mix of platforming, action role-playing (if that’s a thing, I mean like Zelda) and great mini-games with an entirely Japanese flavour.

My favourite is probably the fourth Super Famicom game, superb graphics, and sound and an utterly bizarre story about going into space. I’m going by the cut scenes and don’t really know what’s going on but it ends up with a giant mech version of Goemon doing a Saturday Night Fever dance in a disco, anyone that doesn’t like that is just wrong.

In the unlikely event the franchise has a big revival I would like to see them expand upon the first N64 game, sort of Zelda-esque before Ocarina Of Time was released. It would need to retain its firmly Japanese roots though.
John Atkinson

GC: Zelda isn’t any kind of role-player, as it doesn’t have any stats and everything is determined by your own skill, not the character’s. An action role-player would be something like Dark Souls or Diablo, while Zelda is an action adventure.

Enemy well known
To me there is only one franchise that has been consistently excellent over the last, what must be 30 years [27, to be precise – GC] and that is XCOM. Since the first one (called UFO: Enemy Unknown when I bought it) that I played back on an old 486 PC I have been hooked. The turn-based strategy element has been honed to perfection over the years and the newer versions with smaller squads just make the gameplay tighter and quicker.

At first I was not keen on the limited number of turns per mission in the new XCOM 2 but that has grown on me and my returns to the original game have made the old method seem sluggish (too easy to make small moves and overwatch every turn). That said, the constant world timer did make the overall game experience feel more rushed than I would have like.

The overall base building and resource control element could almost be a game on its own (in fact the original games with large squads and multiple skyrangers could have used an auto-resolve function). It is so simple to operate but you can tune every decision to suit your playing style. I am glad that XCOM 2 ditched the satellites as errors in early planning could easily lose you multiple backers if there were no satellites in reserve and the game would have benefitted from a way to get them back on side.

XCOM remains the only title that I will pre-order as soon as it is announced. I am still playing both of the console versions and that just shows the lasting appeal. But until there is an announcement, I will have to keep playing them and live in hope that the console version of Phoenix Point is eventually released. As for a prayer for a bit of Inbox magic, please release an updated version of Terror From The Deep.
GB72

Plumbing the heights
My favourite retro video game franchise has to be the Super Mario Bros. series. This is a series where almost every mainline entry has at some point been considered the best game ever and has defined both 2D and 3D platformers. I would go even further and say that Super Mario 64 mostly wrote the rulebook for movement in 3D in video games.

The series continues to be popular due to the imagination of the developers. Indeed, there were so many ideas for Super Mario Galaxy that they had to make a sequel just to use them all! The latest entry, Super Mario Odyssey is one of the best, probably only just behind the Galaxy games. The sheer amount of different gameplay scenarios is incredible, especially with Cappy, but just the movement alone is a joy.

I hope future titles continue the tradition of imagination and I can’t wait to see what Nintendo has planned for Mario next. Not bad for a chubby plumber after 40 years!
Barry

30 years of hurt
I know this is a silly choice but I can’t stop myself: my pick is Sonic The Hedgehog! Although the Mega Drive games are still great I fully admit this is solely down to nostalgia and that having any sort of allegiance to the series after all these decades of terrible, or at best mediocre games, is just dumb.

But when I was a kid Sonic was video games! Not only that but he was the tip of the spear in terms of the great Mega Drive vs. SNES console war. Still the greatest console war ever fought. In the last 20 years though, the best I can say is that Sonic Mania was good and I’ll probably get the Lego set. And probably never learn my lesson when it comes to being a Sonic fan!
Fendrick

No change
Great Hot Topic. I’m finding myself pulled more to retro games in general as I get older. The typical mix of being time poor but having greater disposable income means that I can collect some of the games and systems that I enjoyed, and missed, from my youth. And it’s hard to play all the 100+ hour games these days.

The interesting thing is that many of my favourite franchises from 30 years ago remain my favourite today. It’s almost guaranteed that any new entry from the Mario or Zelda series’ will be a purchase for me, with each holding entries in my personal top five games of all time.

How Nintendo have managed to keep the standards of Mario and Zelda so consistently high for so long is astonishing. Super Mario Bros. 3, World, 64, and Galaxy. Zelda: A Link To The Past, Ocarina Of Time, and Breath Of The Wild. Each a stone cold classic and all have perfected or pushed the boundaries of video gaming of the time. How they evolve further from here I’m not sure, but I’m confident the key ingredient that remains will be ‘fun’. The joy of control and movement for Mario, the wonder of exploration and discovery for Link.

It’s great that our hobby has such a rich history, and this is becoming increasingly recognised (I’m sure most of us could get to a video game museum). Whilst it’s common to bemoan endless sequels suffocating creativity, these series have shown that an established franchise does not have to mean mindless repetition of ideas. Personally, I look forward to continue playing with Nintendo’s crown jewels in 30 years’ time.
ProEvoSan78 (PSN ID)

The small print
New Inbox updates appear every weekday morning, with special Hot Topic Inboxes at the weekend. Readers’ letters are used on merit and may be edited for length.