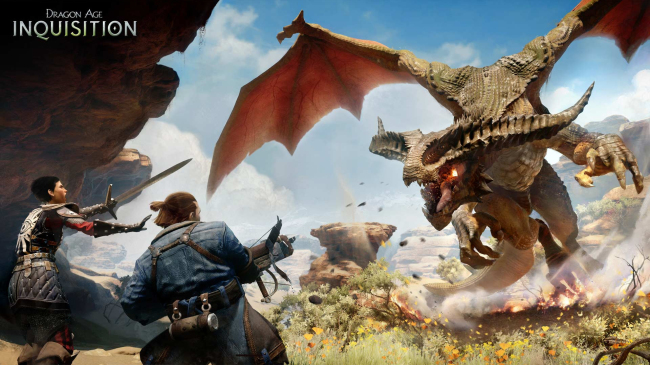 Readers discuss their favourite fantasy video games and the worlds they’re set in, from The Elder Scrolls to Dark Souls.

The subject for this week’s Hot Topic was suggested by reader Gooch, who meant any game with at least a vaguely Tolkien-esque feel, as popularised by Lord of the Rings, as well as low fantasy settings such as Game of Thrones.

We had plenty of different suggestions for the best game and, interestingly, many people said that they don’t usually like the setting but made an exception for their particular choice.

Ogres & Dragons
I’d go with Dragon Age Origins and Inquisition. They have all the ogres and dragons that should make it suitable for this list.

Decent story and mostly likable characters. Combat is fine and the enemies are varied enough to keep it interesting.

I was going to go with Dark Souls, but I think Dragon Age is a more liner story-based game and easier to follow along with.

The combat might put some people off, as it’s a mix of real and turn-based but after I got used to it I loved it. I even bought the DLC for Origins, which is something I rarely do for any game.
Bobwallett

Exception to the rule
It’s got to be Skyrim for me. I imagine that’s going to be a common choice but personally I don’t really like fantasy settings and am generally put off them, with them all making up their own rules and backstories that are still always more or less the same.

Skyrim is technically just the same in that regard but it’s not the story that’s the appeal but the amazing game world and the way that you so completely feel a part of it. The exploration, the characters, and the quests really drew me in, in a way no other fantasy game is.

I gave Dragon Age a go but, despite liking Mass Effect, I just couldn’t get into it. It’s a bit more fantastical, with lots of weird monsters, than Skyrim and I guess I prefer my fantasy a bit more grounded.
Acore

No more orcs
For me the answer to this is very obviously Divinity: Original Sin 2. It’s not only the best fantasy game I’ve ever played but one of the best video games full stop. In terms of role-playing games I’ve never played anything like it and the amount of control you have over your character and their party, and the way you interact with the game world is unlike anything else at all.

The world itself is quite unique too. I don’t think it’s based on anything else that already exists, but either way it’s got lots of weird races and magic abilities, and not just the usual dwarves, elves, and orcs.

I don’t really like all that stuff and find it very unoriginal that most fantasy games keep reusing those ideas over and over. Original Sin 2 is much more imaginative than that and I strongly recommend it to everyone.
Gadfly

Deep cut fantasy
I’m going to put in my vote for Silver – I can guarantee no one else will.
It’s an unfairly forgotten PC game from the early 2000s.

Silver was a fantasy game, where your lady friend is kidnapped by the big baddy and you go on a quest to get her back with your posse. The story was a bit cliche even 20 years ago but what made it special for me was the lovely graphics, great voice acting, and sublime soundtrack. All this culminated in a wonderful, immersive game that I really enjoyed.

From what I remember it was polygon sprites on static pre-rendered backgrounds and you use mouse clicks to move your character and slash your weapons.

The game came with my new Tiny PC (remember them?) and is a bit of a forgotten gem.
Rangersingh (PSN ID)

Better than life
I love a fantasy setting, as a rule I’d always prefer one over real-life just because of the creative possibilities that go along with them.

They can feel a bit played out now but it’s easy to forget there wasn’t this proliferation of fantasy settings in gaming pre-Lord of the Rings: The Fellowship of the Ring (the film), but obviously that was such a monster hit the whole entertainment industry jumped on the bandwagon, and that bandwagon clearly still rolls on today.

The Witcher 3 is probably the ultimate fantasy game for me, in terms of one that really sticks to a traditional fantasy setting – it’s so fleshed out, it really absorbs you. The fact the game sold 40 million copies with the combat and controls being of the quality they were is such a testament to the quality of the setting. It really helps that the characters aren’t the usual dull ciphers that can plague fantasy narratives as well.

The Legend Of Zelda series is maybe more fairy tale-inspired than it is inspired by classic fantasy, but I suppose it still has a lot of those elements, as well as a lot of Shinto iconography and themes also. It all works really well together for me, and the settings are a real strength of the series.

Just one out of left field, I played Greedfall a while ago. I didn’t finish it – I didn’t hate it either but the gameplay was pretty uninspired and the writing was a bit meh – but the setting was excellent. It wasn’t very heavy on fantasy tropes, but they were still there in parts, but it was just very unique and felt more original than anything I’d played in a long time. I’d give the sequel a second look just on the strength of the setting.
Charlie

Evil atmosphere
For me it’s definitely Elden Ring, and basically all of From’s work. I love the atmosphere of the game and the obvious beauty of the world contrasted by the disgusting ugliness of the enemies and the foreboding sense of evil and defeat.

I do wish the story was a bit clearly, as I still have trouble following it even after watching countless videos about it. More characters, particularly good ones, would be nice too, but hopefully that can all come in the sequel. It already kept me more engaged than Skyrim or anything else like that.
Kent

Martin vs. Tolkien
I thoroughly enjoyed the Dragon Age series, including the second game which was extremely linear but with fun characters to have interesting relationships with. All uniquely diverse, not just in personalities but in their sexualities, which was bold and very forward thinking of the developers.

Dragon Age is probably more like Game of Thrones but there are Tolkien and Lovecraft references as well, due to the other worldly planes of existence breaking open through rifts throughout the lands.

Dragon Age has the dirty nastiness of George Martin’s world and the satirical innuendo to match, rathe than the more honourable world of Tolkien.

The Elder Scrolls is more Tolkien, while The Witcher is more George Martin. The actual Lord of the Rings games are probably not up there with the best fantasy games, but Middle-earth: Shadow Of Mordor was a pretty good attempt at Tolkien. Although reducing creatures like Balrogs and Nazgûl to less powerful enemies compared to the book’s top tier god-like versions is a bit too much to overlook sometimes.

Obviously the Soulsborne series is Lovecraft and even more gruesome than Game of Thrones, with no tranquillity anywhere, just death and misery mostly. I would love to see the lands of Drangleic, Lothric, Boletaria, and the Lands Between in their golden years, before they were ravaged by the undead, plague, disease and all decency drained away from these once great lands. A sequel maybe, with open world exploration and villages with normal decent folk, with the royal families looking after the lands before the rise of war and decay.

With fantasy still being huge with Amazon’s Rings of Power and HBO’s House of the Dragon, fantasy will be mainstream for the foreseeable future. But a top tier Lord of the Rings open world game would definitely be well received by me indeed. And preferably not made out of Lego! Even though they were good in their own quirky, humorous ways!
Alucard

You can also submit your own 500 to 600-word Reader’s Feature at any time via email or our Submit Stuff page, which if used will be shown in the next available weekend slot.