Is there a song in Persona more iconic than the one that plays in the Velvet Room? It's enjoyed different titles and arrangements since its introduction, but no matter which game fans hear it in, they're immediately put in a mood to fuse demons and speak with distinctly blue-garbed, white-haired, assistants.

And who sits behind those assistants, commanding them and helping to shape the protagonists' journeys? Igor, of course; but who is this man, truly? At times, he seems downright omnipotent. On other occasions, he's interested in seeing where the world is headed but takes a decidedly hands-off approach. Yet always, he is watching. Waiting. At the furthest bounds of the human consciousness, Igor lurks.

Frankly, it's all a bit creepy, isn't it? Let's cast some helpful light on this puppeteer proprietor and his various contributions to the world of Persona, one game at a time. 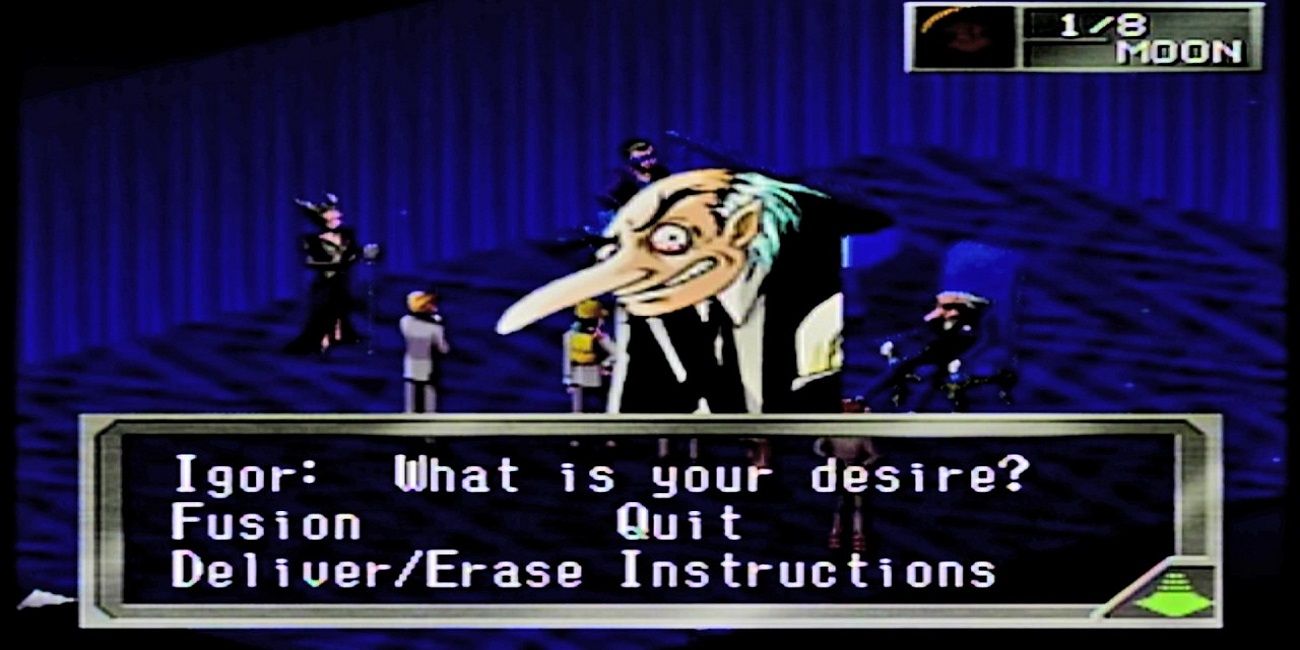 We're introduced to this long-nosed icon of a man in Revelations: Persona, or Megami Ibunroku Persona as it's known in Japan. These days, with more recent Persona games outselling even mainline Shin Megami Tensei entries handily, it's almost hard to believe the series started as something of a low-rent spinoff.

In his inaugural appearance, Igor shares the Velvet Room with fellow denizens Nameless and Belladonna. The former plays piano to the tune of the location's iconic song, while the latter sings lyrics alongside him. As for Igor himself, he says he's a servant of Philemon.

It's tempting to tilt our Igor-focused examination wayward and study Philemon in greater detail – especially since there's not much else to say about Igor himself in the first game. But it is sufficient to say that Philemon is a benevolent deity, albeit with a dollop of godly curiosity that tends to suggest he does not regard the lives of individual humans with quite the same severity as we mere mortals do. 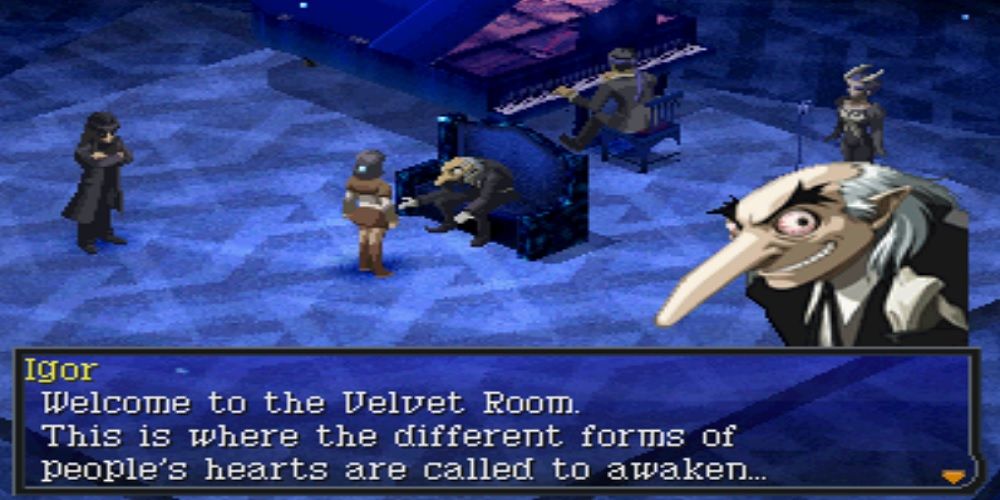 The second game in the Persona series is, in fact, split in two. Eternal Punishment picks up right when Innocent Sin leaves off; combined, Persona 2's twin titles rival even Persona 5 in epic length.

But what of Igor? Well, he serves the same role as he did in Revelations: Persona. He's a servant of Philemon who aids the heroes with their Persona-summing antics. A layer of empathy is added courtesy of Igor's clear compassion toward Ulala Serizawa following the woman's clash with a mystical illness known as 'Joker insanity'. (Quite the name, we know.)

With a sharper and more detailed piece of artwork that emphasizes bloodshot eyes contrasting a perfectly business-like suit, Igor's incredible strangeness comes further into view. But he still plays second-fiddle to his powerful masked master.

Persona 3 and Persona 3: The Answer 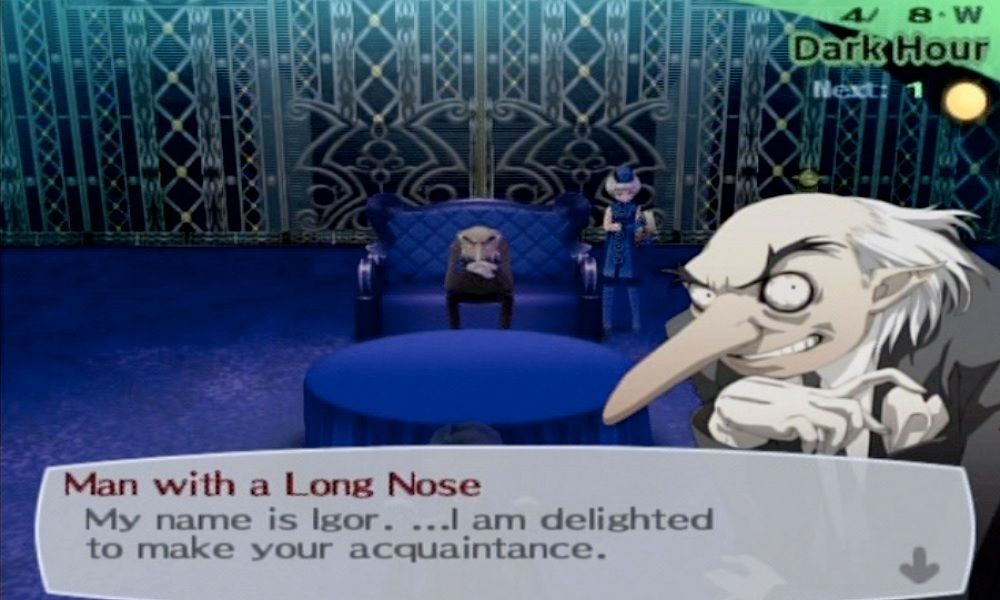 There's a common misconception that Persona's stories and themes were not particularly complex until Persona 3, but the Persona 2 games are every bit as stuffed with plot twists and thoughtful allegory. The real revolution that the third title provides is a deeper commitment on the writers' part to strong characterization across the board, from the main party to the secondary cast like Igor.

Here, he is accompanied by an assistant named Elizabeth (or Theodore in Persona 3 Portable, should the player select the female protagonist rather than her male counterpart). Nameless and Belladonna are, for whatever reason, no longer present. More crucially, Igor never even mentions his subservient role to Philemon. Perhaps we can infer that Igor has come into his own so thoroughly as master of the Velvet Room that he no longer feels the need to mention his boss.

It's during The Answer, a lengthy epilogue chapter starring an android from the main game named Aigis, that Igor's personality is expanded upon more notably. Igor briefly regards Aigis in a distinctly companion-like fashion, recognizing that both of them are creations designed for a particular purpose. Aigis is an 'Anti-Shadow Suppression Weapon' constructed by a multinational trading company called Kirijo Group, while Igor only presides over the Velvet Room per the will of his creator, Philemon. In essence, both characters are simply means to an end. 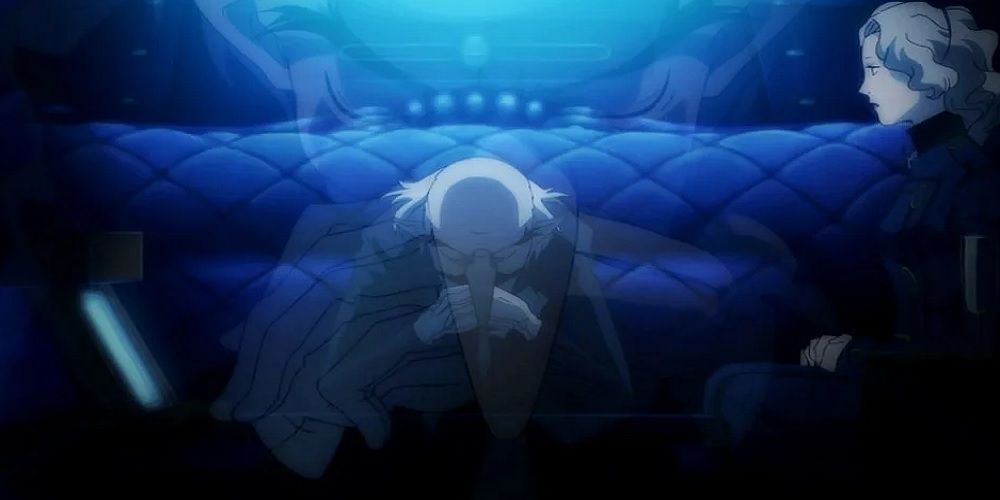 The Velvet Room shifts in Persona 4, donning an exaggerated representation of a limousine with a comically large interior. As the Velvet Room is located between consciousness and unconsciousness, a sort of Jungian psychology "what if?" in which real-world metaphorical matters have been made physically manifest, its appearance is always symbolically reflective of the protagonist's journey.

With Persona 3, it is a lavish elevator. The cast of that game climbs a mysterious tower to the top throughout the course of their adventure. In Persona 4's case, Yu Narukami investigation into an ongoing string of murders gives off a bit of a film noir vibe, and the limousine travels through a manifestation of the same fog that blankets his small town.

While ostensibly this says more about the Velvet Room than the man of mystery who runs the place, Igor and the Velvet Room are ultimately so tightly interlinked that it's difficult and potentially irrelevant, to attempt to discern where the dwelling ends and the man begins. 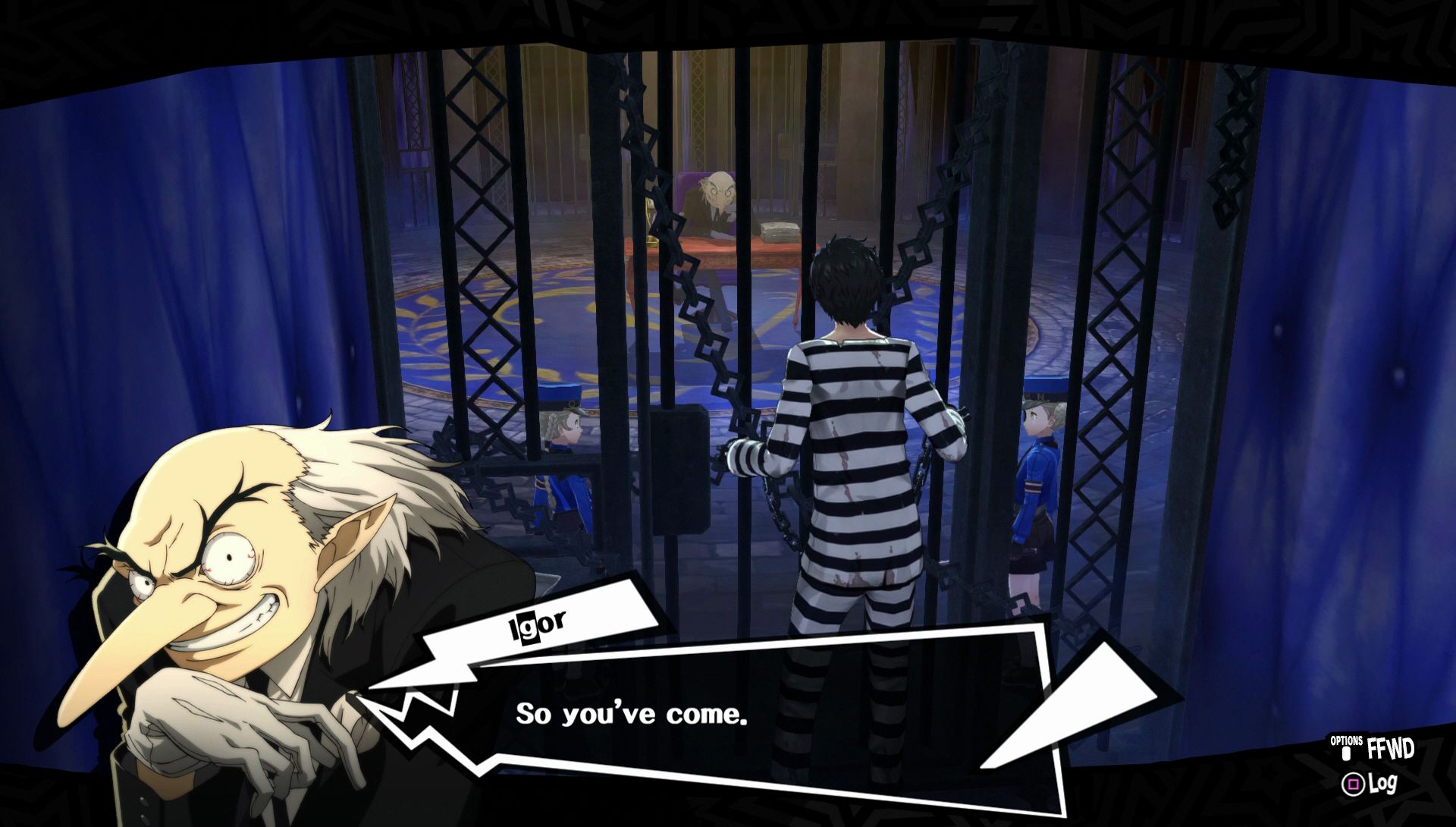 Igor is arguably a more intriguing figure than ever in Persona 5, the most recent major entry in the series. Ironically, it's his absence for most of the story that finally provides Persona's writers with the catalyst necessary to delve more deeply into Igor as a creature and the extent of his strange capabilities.

Sure, there are dozens upon dozens of scenes throughout the massive Persona 5 that feature Igor's body. It's only after many months in-game (and probably at least several weeks in real life!) that players learn the true identity of the Igor they have been conversing with: Yaldabaoth. Prior to the events of the game, the demon Yaldaboath imprisoned the real Igor in Mementos, an incarnation of the Collective Unconscious.

Understanding Yaldabaoth means coming to terms with the idea that this vile god was created from humanity's proclivity toward slothfulness. In Persona 5, the Velvet Room has once again had its aesthetic completely revamped; it's a prison now, with our young hero Joker (or Ren Amamiya, if we're going by his anime adaptation name) being forced to earn his rehabilitation through service to the supposed Igor.

Yaldabaoth establishes a complex and deadly game pitting Joker and his fellow Phantom Thieves against a dreadful rising political star named Masayoshi Shido. He also taps junior detective Goro Akechi as an alternative path to stopping Shido. And yet, he never intended to uphold the bargain – taking down Shido doesn't exactly put an end to the story, but rather pits players against Yaldabaoth at long last.

What can so many paragraphs about an evil impostor tell us about Igor, however? Well, it shows us he's hardly impervious to the machinations of darker forces within the Shin Megami Tensei multiverse. But there's more. After Persona 2, the identities of Igor's assistants is never the same for more than one game. Elizabeth is replaced by Margaret and Marie in Persona 4, and they, in turn, are replaced with Caroline and Justine in Persona 5.

Caroline and Justine, however, are split beings of an original assistant named Lavenza. (If you're confused about why Igor even has a rotating door's worth of helpers to begin with, will it help if we tell you they're all siblings? No? We tried.) Yaldabaoth severed Lavenza into two forms, both far weaker, their original existence erased from their minds. But those memories eventually return, thanks in no small part to Joker's interference, and we soon learn that Lavenza might just be Igor's most faithful follower yet.

Igor even created a special being, Morgana, as a last-ditch plan to aid the Phantom Thieves against Yaldabaoth if needed. Truly, the game's real prisoner is nonetheless going hard this time with some 4D chess maneuvers he's never had to pull off previously. 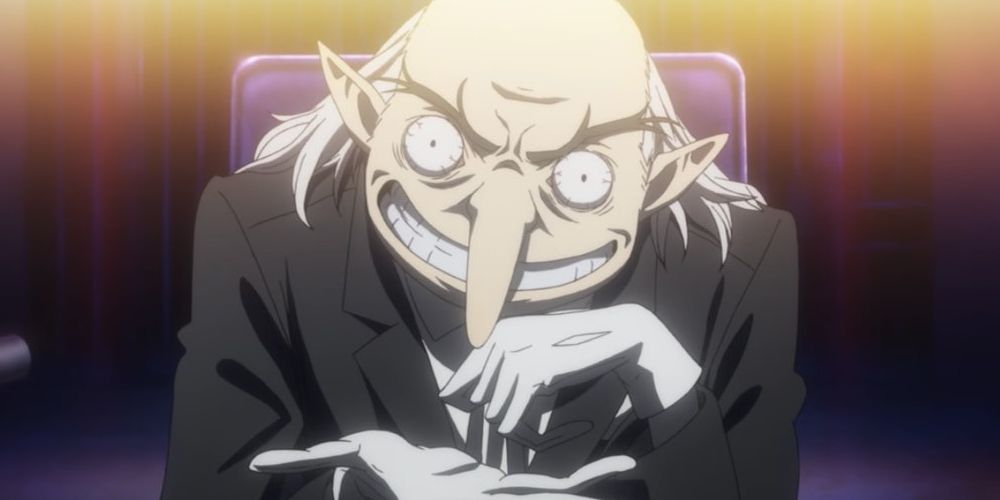 What does it all mean? How much closer are we now to fully understanding Igor? In a sense, we've covered everything there is to know about him. There's nothing more, not really. So, why does it feel like something is missing? A final piece to the puzzle, a story arc or even just a single moment that more richly represents him? Something that gives us a peek inside the head of this orchestrator in the so-called Aria of Souls?

Igor exists within a plush room symbolizing the innermost thoughts of all humanity. He is but a cognitive specter, so to speak, a servant to Philemon as is expressly stated in early games but erased from latter scripts. His personality expands beyond the confines of such reminders, and his bizarre voice and mannerisms become something of a horror-infused second home to longtime fans.

Perhaps Persona 6 will delight us with further insight, expanding upon the increased presence Igor possesses in Persona 5. Or perhaps it won't. Either way, he is a franchise fixture, appearing not just in the games, but the anime, the manga, and everything else Atlus tosses out to tide us over between the bigger fare.

That perpetual sensation? That desire to know more? To occupy his mind, if only for a moment, to see in full why he'll always harbor that crooked, knowing smile? That's precisely the point of it all.

Except when he's actually Yaldabaoth. Then he's just rude.