Every Magic: The Gathering player has a favourite Planeswalker. Unfortunately for me, my favourite was Ajani Goldmane who, in Dominaria United, turned from the Big Supportive Cat Dad I loved into a hideous Phyrexian monster in a fate worse than death known as ‘compleation’. I’m not over it and I’m not okay, thanks for asking.

With next February’s Phyrexia: All Will Be One, plenty more people are going to feel the loss I have. While ten Planeswalkers are heading to Phyrexia to take on Elesh Norn, Wizards of the Coast has confirmed that only five of them will escape unscathed. For our own morbid curiosity, Wizards has also released art imagining what all ten of them would look like if they were compleated, so let’s have a guess at who’ll survive, and who’ll become a gross oil monster like my sweet, sweet Ajani. 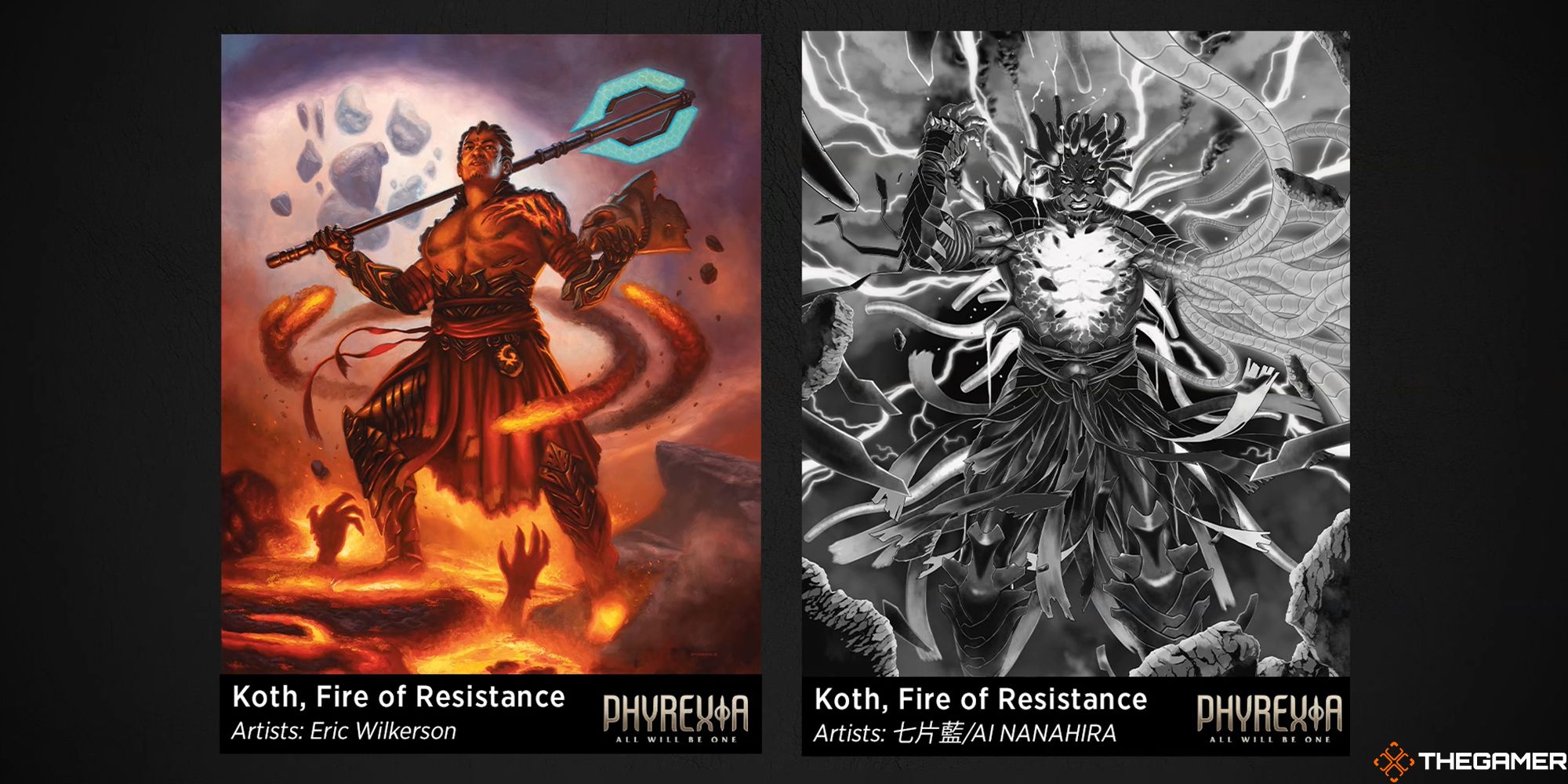 Koth’s the easiest one, as Wizards has already shown off his card and we know he survives. It would’ve been one hell of a bummer to bring him back after so many years only to compleat him, after all. 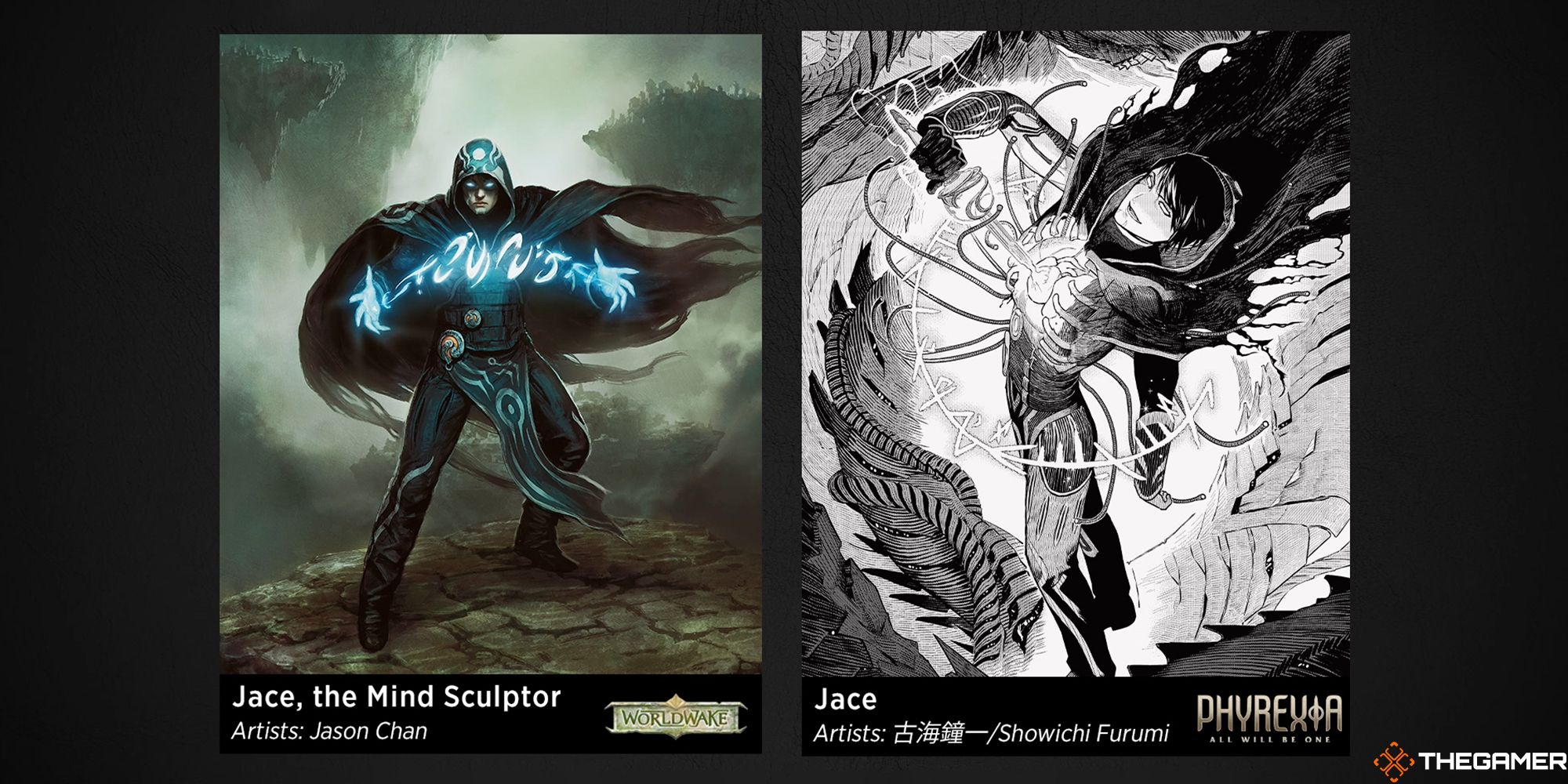 Jace may be the poster boy of MTG, but he hasn’t been up to much in the last few years. His only big appearance was in Zendikar Rising, a set whose story has so far had zero impact on everything going on with the Phyrexians. He’s no longer the Living Guildpact of Ravnica, and he hasn’t been doing much with the Gatewatch either.

The biggest giveaway for Jace being compleated is in this art that shows him cutting his own heart out with Elspeth Tirel’s angelic blade, the Luxior. It feels like such a random inclusion in his art for it to not have some importance, as Jace never went to New Capenna and has had minimal contact with Elspeth. Either this is a big fake out, or Wizards is hiding the biggest loss to the Phyrexians right under our noses. 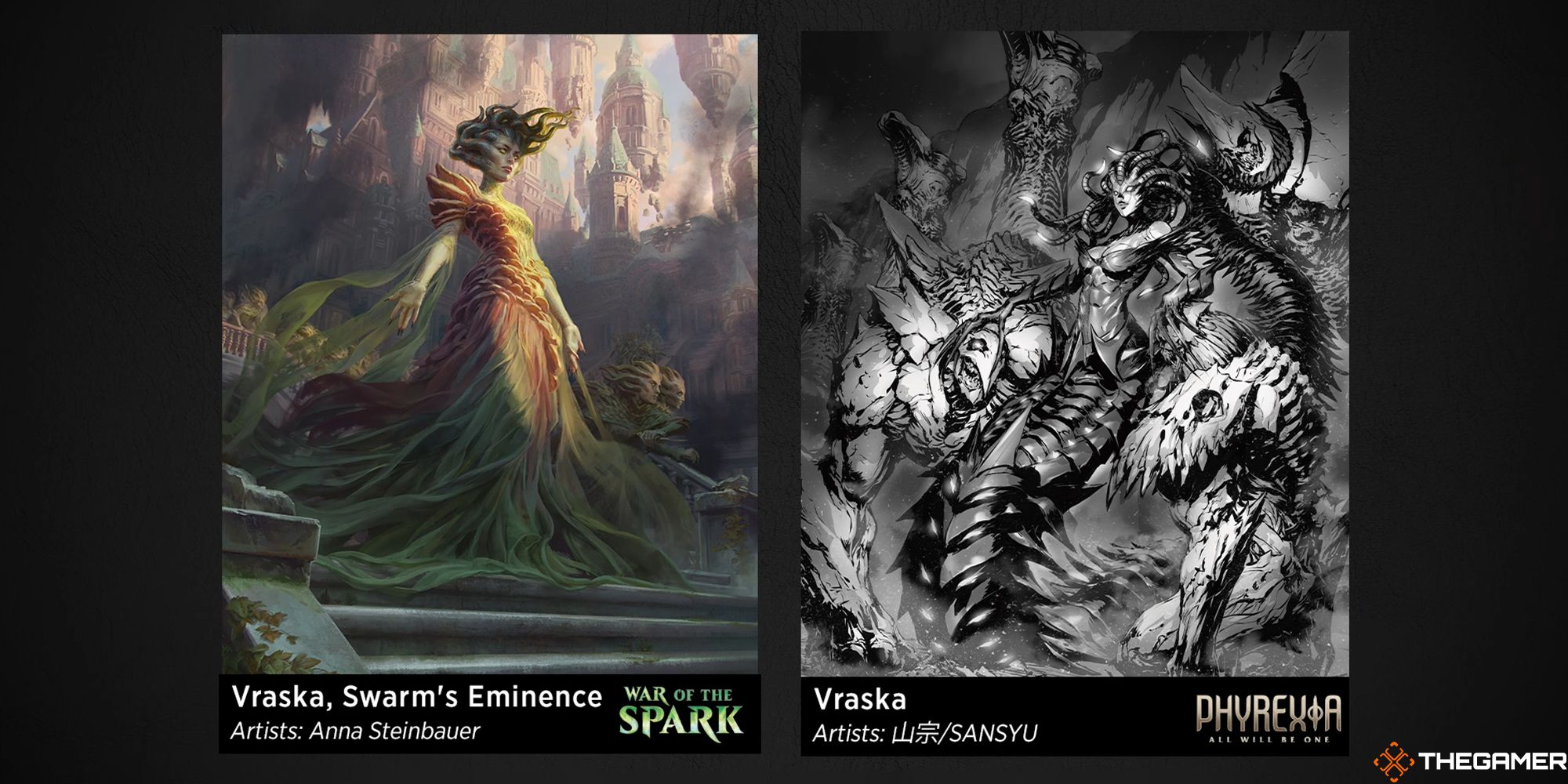 Since the announcement that five of these Planeswalkers wouldn’t survive All Will Be One, many have pointed to the digital-exclusive Alchemy card Assemble The Team as proof that Vraska is turning Phyrexian. The art shows her standing with long nails and weird glowing patterns, a decidedly Phyrexian makeover for her.

However, I don’t believe she’ll finish All Will Be One as a Phyrexian. Either this is a bait-and-switch, and the art will be digitally updated later (as Alchemy cards are able to do), or Vraska will be the first Planeswalker to ever ‘undo’ their Phyrexian programming. It feels like too much of a missed dramatic opportunity to compleat both Jace and his on-and-off lover Vraska. 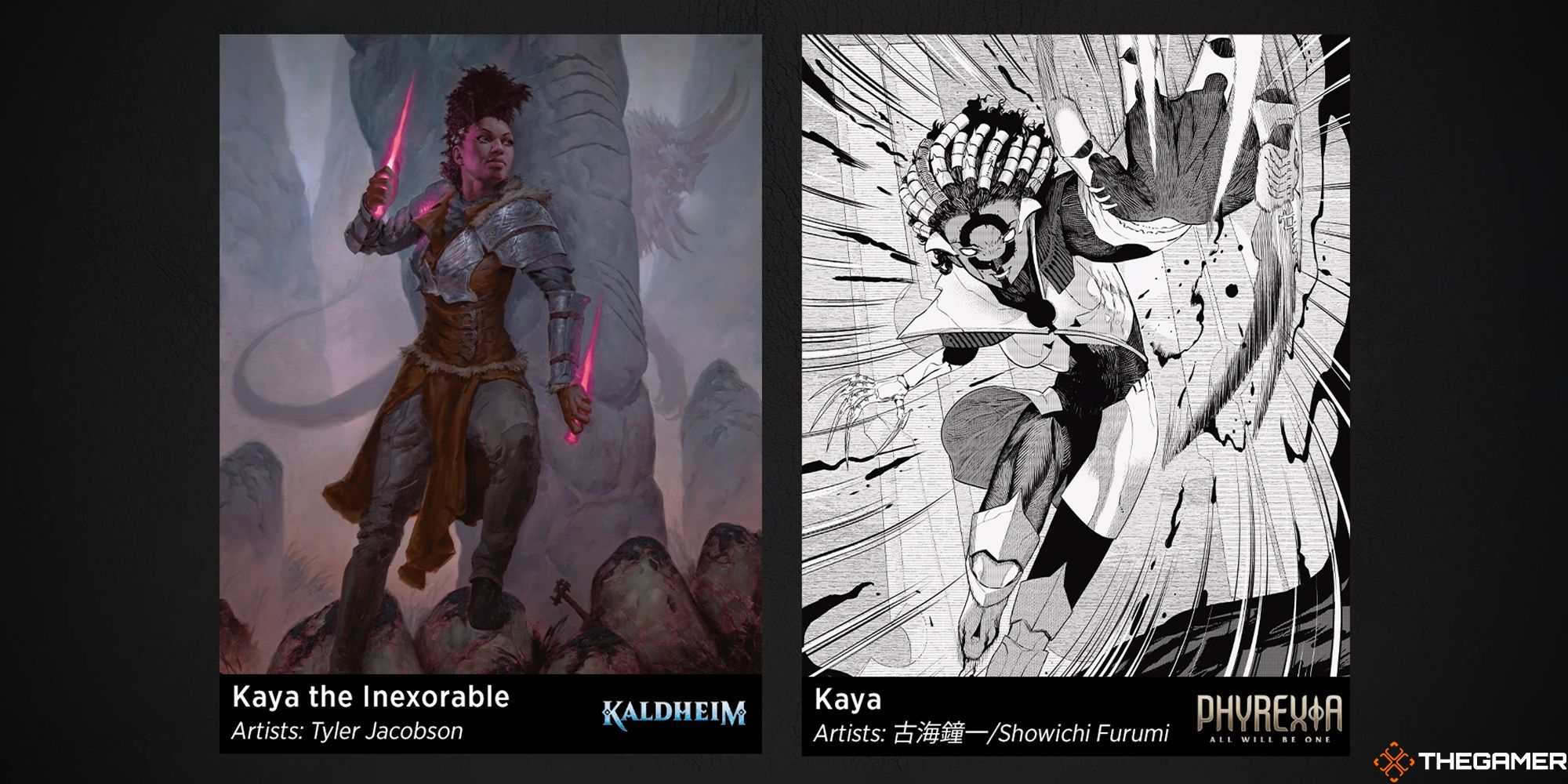 Kaya’s had a huge amount of story time in the last couple of years. She was a main character of Kaldheim, Innistrad: Midnight Hunt, Crimson Vow, and The Brothers’ War – only rivalled by Teferi in the number of recent appearances.

Her philosophy has always been that people should be equal and “everyone gets what they truly deserve”. This ethos could easily be twisted into the Phyrexian mindset of ‘All Will Be One’. The idea of a Phyrexian who can become intangible at will is also terrifying.

I’m not convinced that the manga alt-art we’ve seen of compleated Kaya will be the official design, though. The Phyrexian brand on the face feels too on-the-nose. Out of all the characters, Kaya is the one I can most see going either way. 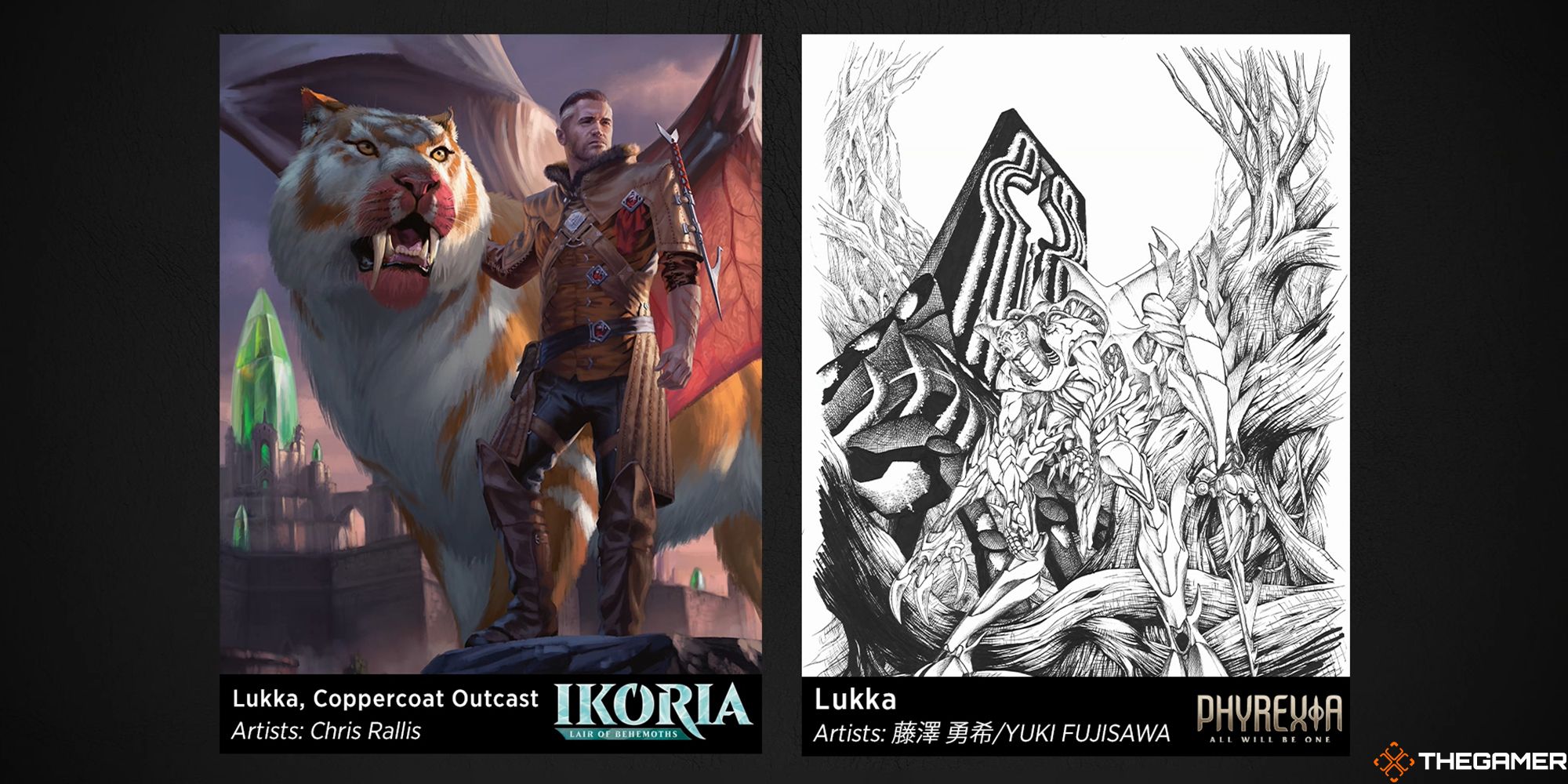 At first, I thought Lukka would be the prime candidate for compleation. He’s already a morally dubious character, serving as either a hero or villain, depending on the set he appears in. He also isn’t a particularly important character so far, having only been around for a few years.

However, I think there are bigger things brewing for Lukka, and turning him into a Phyrexian now would bring all that to a halt. We still need to know about the mysterious voice of the Ozolith that turned him into a Planeswalker, and there’s also his whole Kasmina grudge to deal with. 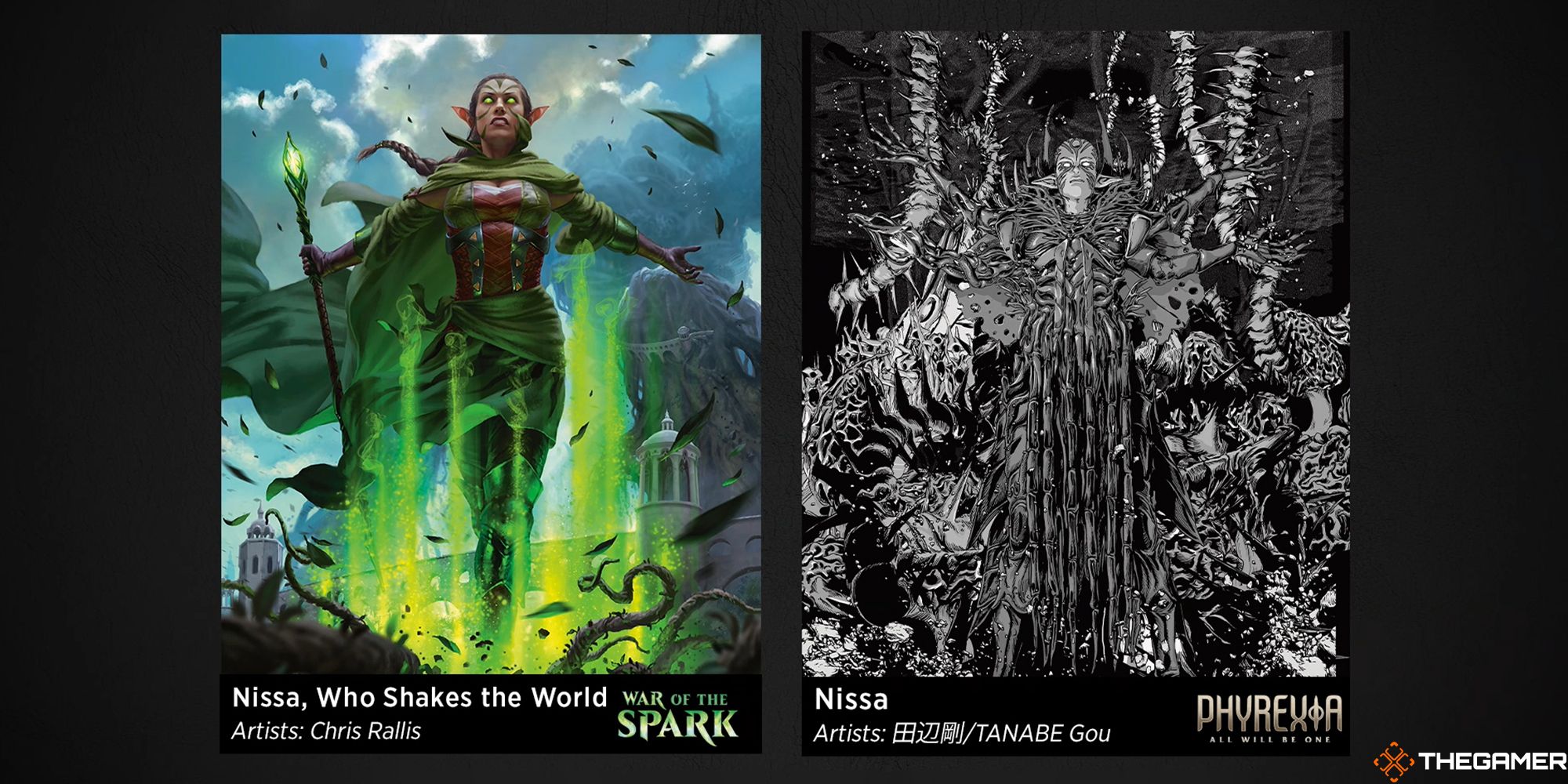 There’re a few reasons to believe Nissa will be compleated.

The first, and most obvious one, is she hasn’t been up to much lately. She reduced her role in the Gatewatch to focus on rebuilding Zendikar, and her relationship with Chandra Nalar is well-and-truly over. She’s also mostly been supplanted as the main Green-centred Planeswalker by Vivien Reid, who was the lead in both Ikoria and Streets of New Capenna. There’s just no point in keeping Nissa around.

Having her become a Phyrexian would motivate both Chandra – who just also saw her old friend Ajani fall to the Phyrexians as well (sob)– and Nahiri, who still holds a grudge following Zendikar Rising. It would even give the Phyrexians a Planeswalker with access to black mana – something they don’t currently have with Ajani and Tamiyo. 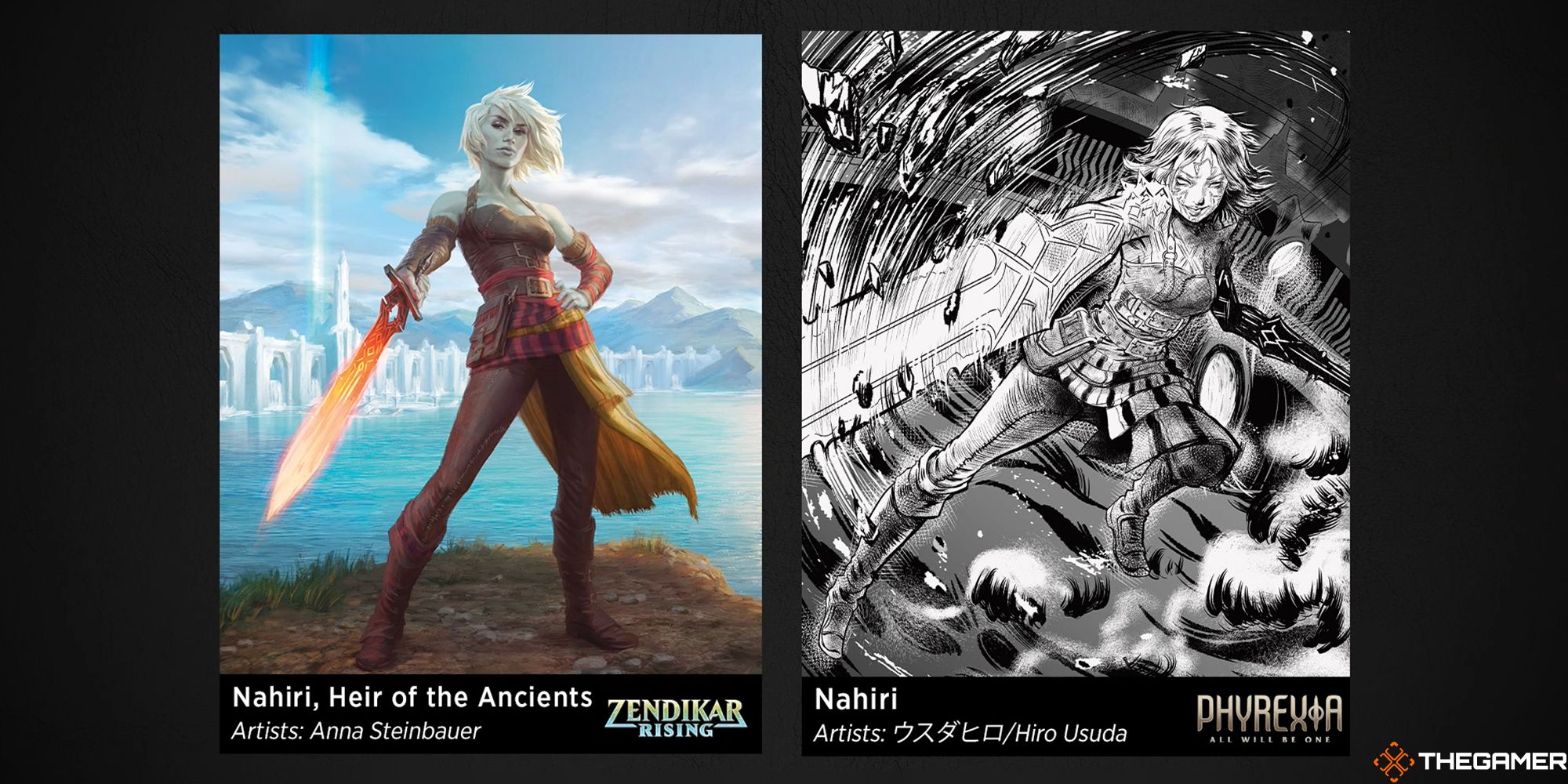 I thought Nahiri was going to be compleated until Wizards revealed the set symbol for the following release, March of the Machine. They show swords that look eerily like Nahiri’s famous stone blades, making me think she’ll survive Phyrexia and become a much more important character in the next set.

It also sets up another layer of conflict between her, Jace, and Nissa. The three clashed in Zendikar Rising over how to save the plane, and having that tension come to fruition here with the latter two joining the Phyrexians would give Nahiri a way to channel that thirst for vengeance that has always driven her. With how little impact Zendikar Rising has had on the story so far, it would be very nice to give it at least some kind of payoff. 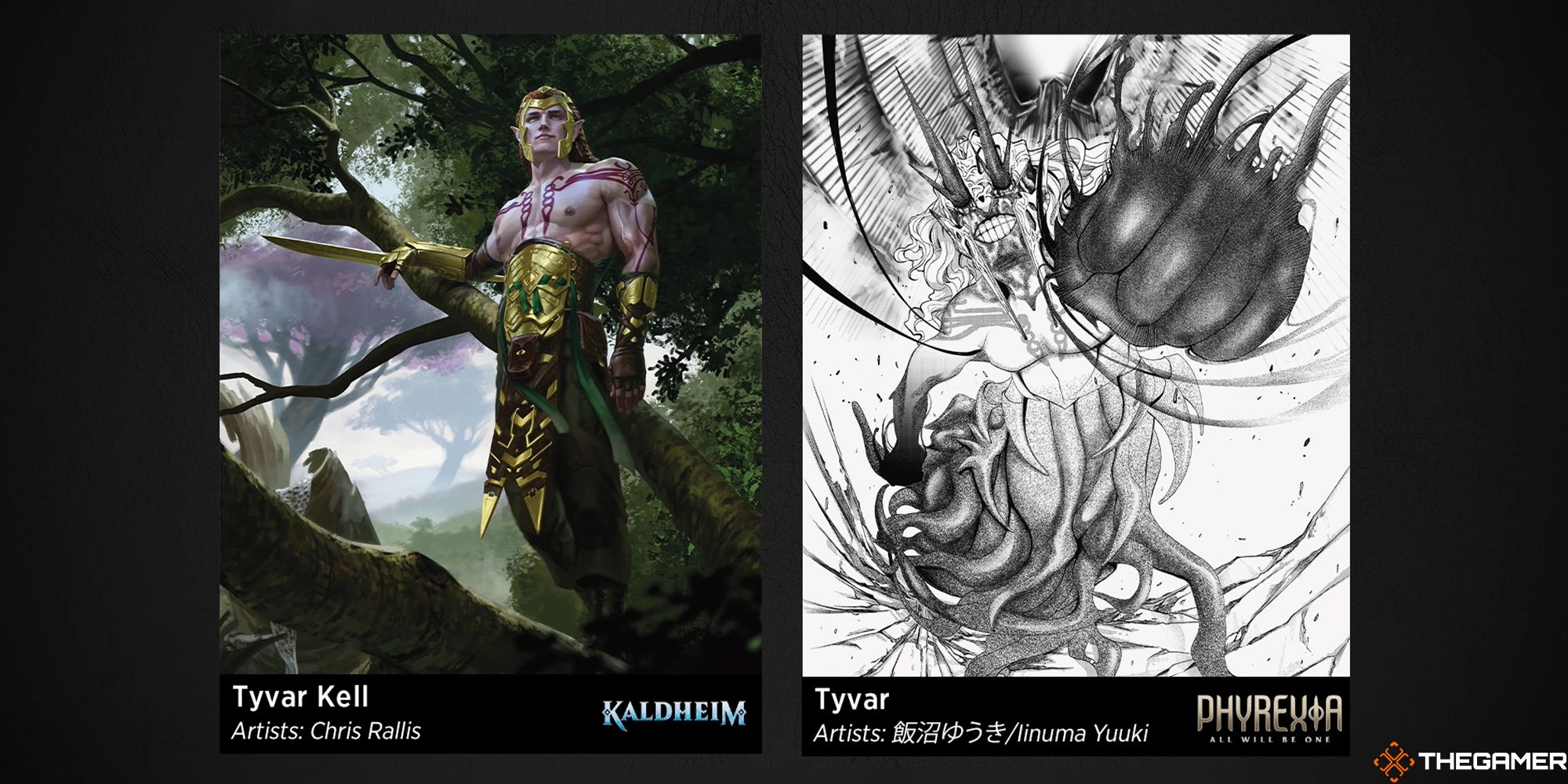 Everybody completely forgot Tyvar exists, didn’t they? He was a somewhat popular character in his debut set of Kaldheim, giving us an interesting look at a Planeswalker discovering what they are for the first time, and needing to be introduced to the multiverse. After that, he was never seen again, making his reappearance here suspicious.

Unlike Lukka, who is also rarely seen, Tyvar has no ongoing story. He feels like the fodder pick just to pad out the numbers. Unless they build up the relationship between Tyvar and Kaya – the first Planeswalker he met – to heap on the drama when one of them becomes compleat, there’s not much point in having him hang around, and the thought of Phyrexian Elves to play with is too good to pass up on. 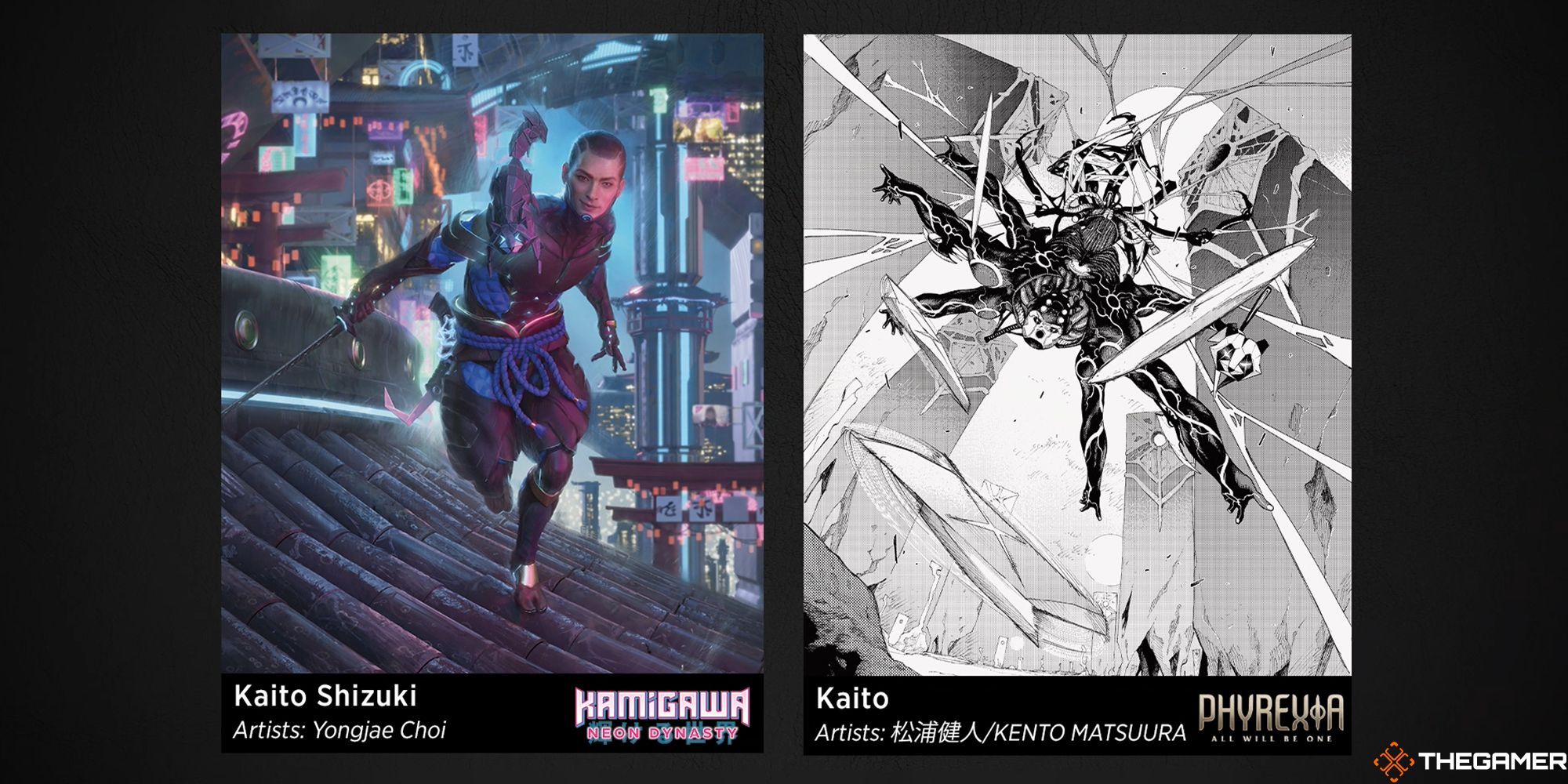 There’s no way Kaito is being compleated. Kaito served as the face of Kamigawa: Neon Dynasty, the set that effectively kicked off the current Phyrexian story. Not only has he got more experience than most with fighting the Phyrexians thanks to his clash with Jin-Gitaxias, but his bound kami Himoto has also long been implied to play a larger role in the story than we’ve seen so far.

I think Kaito is being set up to become the next Jace. Where Jace is a near-omnipotent mind mage who can seemingly do everything with a wave of his hand, Kaito is a fresh-faced newcomer to the Multiverse. There are lots of stories to tell about him and Himoto, and cutting all that short just a year after his debut would feel like the kind of lazy writing I don’t expect from Magic. 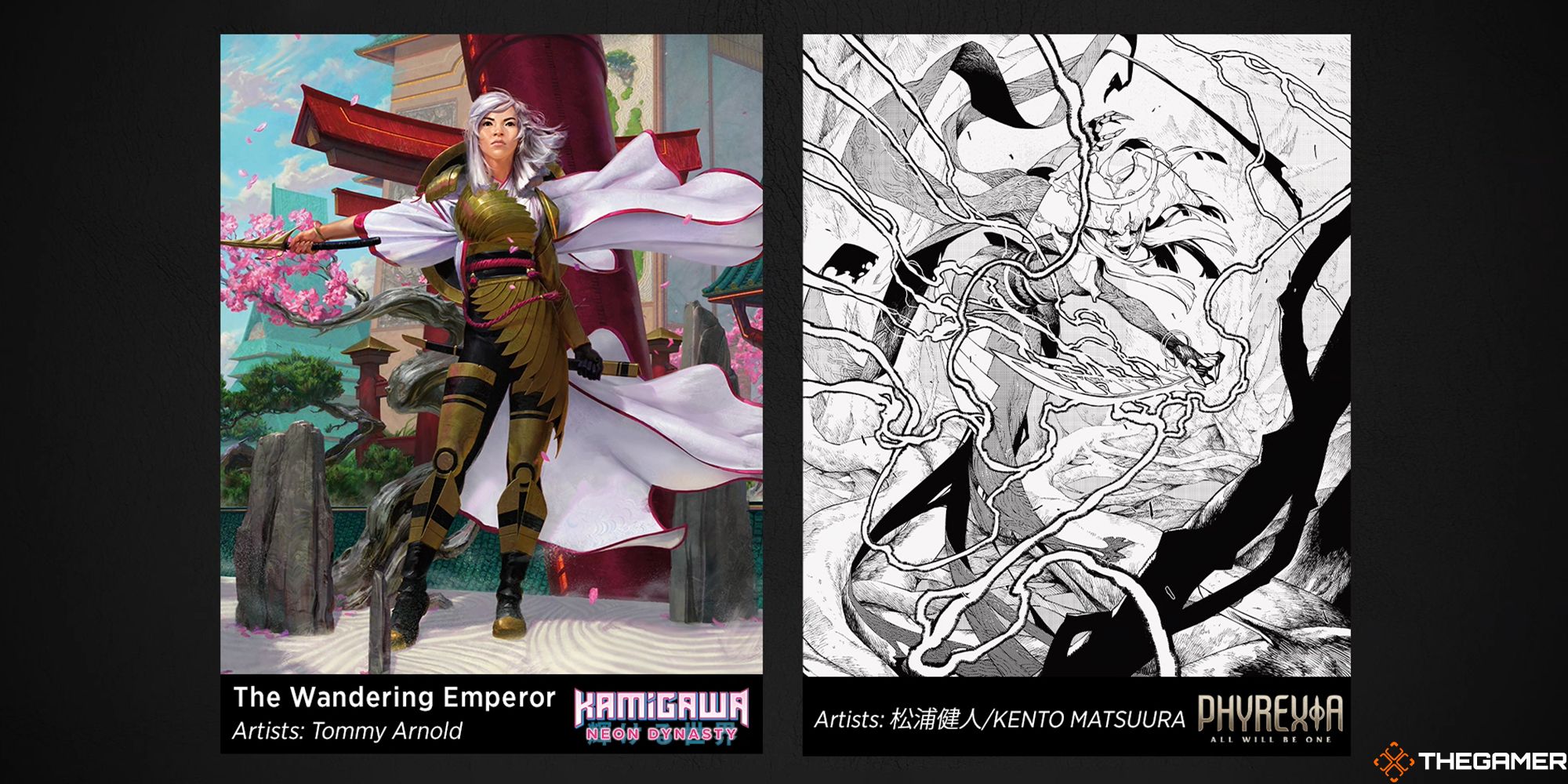 While Kaito’s story is only just beginning, his friend The Wanderer’s has more or less come to an end. Much of The Wanderer’s point of existing was the mystery surrounding who she is, but now we know she’s the emperor of Kamigawa, and so her character arc feels finished.

The Wanderer also seems like a great strategic asset for the Phyrexians. She’s famous for her sword fighting, has complete control of Kamigawa, and, most importantly, has a faulty Planeswalker’s Spark ripe for investigating. For a species that wants to spread its corruption throughout the multiverse, The Wanderer might be the best weapon it can hope to get its hands on.