What is it? Why can’t I stop? Thunk. Thunk. Thunk. That’s the sound of a pickaxe along a dark tunnel. I’ve run out of torches, but I just can’t stop. There’s some treasure ahead—probably, somewhere. A sparkly ore. Maybe a cavern that opens up to a room filled with chests and slime. My little brother – who is playing Core Keeper with me – squeals as the screen shakes and the giant maggoty slug monster carves a path through the caves, leaving behind a trail of slime, monsters, and destruction.

Core Keeper is an indie breakout hit, developed by Pugstorm and published by Fireshine Games. Pugstorm’s previous title was the criminally underappreciated Radical Rabbit Stew, a charming pixel arcade adventure game. The team has clearly built upon the foundations of Radical Rabbit during the development of Core Keeper. It’s still deep in early access, but for the price and the amount of content delivered, the game is arguably already worth it. You can compare Core Keeper to the classics of the digging genre, the likes of Terraria and Minecraft, and you wouldn’t be far off the mark. You dig holes. You build a base. Games like this are rarely unique, and yet Core Keeper ticks some boxes and snaps some collars in the right places.

Take its visual design. The game is gorgeous. The way the dappled light falls from a hole in the invisible ceiling above you, exposing a grassy clearing littered with treasure chests. Reflections in the water cast long and strange shadows in the half-dark tunnels. Torches bathe your cosy little base in orange light and provide the sort of ‘welcome home’ warmth you need in a game that is constantly trying to kill you. It’s gorgeous. 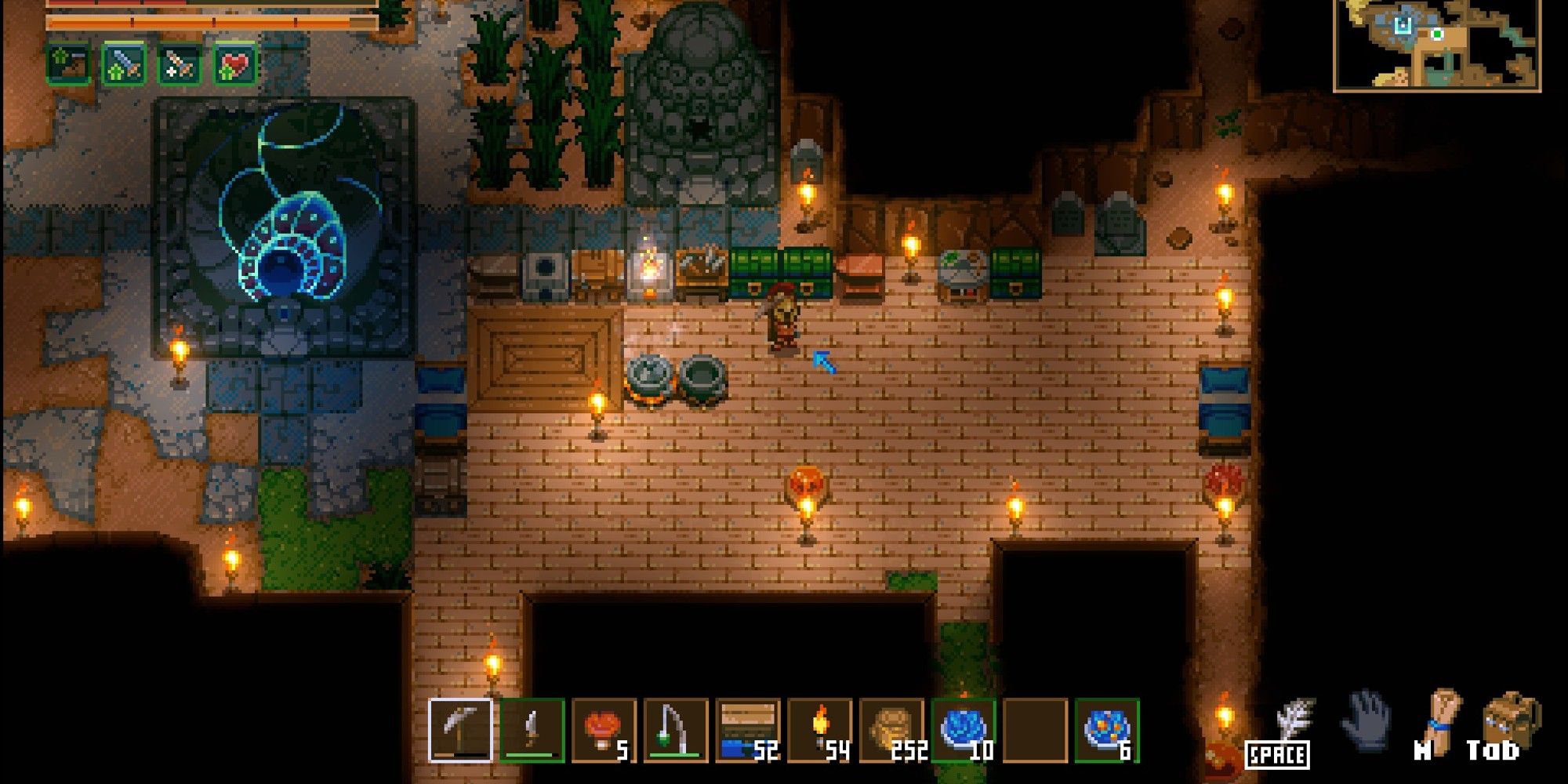 Core Keeper is a twin-stick top-down Terraria. That’s how I might explain it in a video meeting. To my little brother, I just said “it is like Terraria, but you can play it easily with a controller”, and we were in. Combat is straightforward but nuanced – you can’t just smack the enemies around with your sword, otherwise, you will die. There are dozens and dozens of different foodstuffs and potions to craft, each providing meaningful combat buffs and a compulsion to keep discovering what happens when you stick a Bomb Pepper in the pot with the husk of that weird glowing plant you just found.

But there is something more to Core Keeper. Something I’ve been thinking about for a while. I spoke to my friend who already had a few dozen hours in the game (I had to ask her how to fish properly) because I wanted to know why she kept coming back to games like this. Games with tunnels and pickaxes and fishing and base-building. She mentioned something called ‘slow living’, something the internet describes as “a different approach to life, where you complete tasks at a leisurely pace.” It’s found growing popularity across social media, especially on TikTok and YouTube. 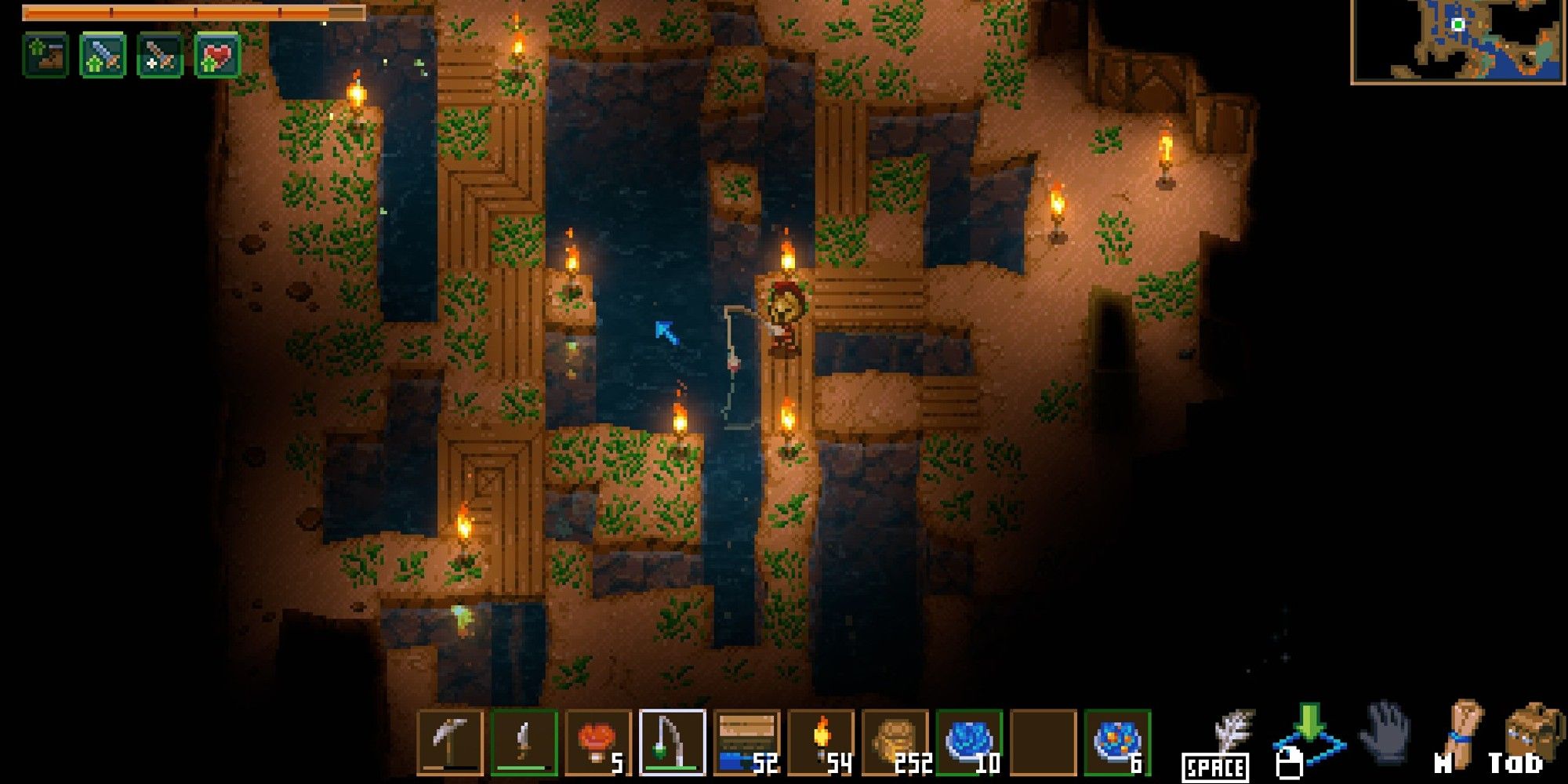 Slow living is a type of feeling and atmosphere that Stardew Valley pretty much nailed, and the same can be said for Core Keeper. You can farm in Core Keeper, you can fish, and you can build a base. Sometimes there’s a spectacular boss battle or a run-in with a horde of flesh-eating maggots, but for the most part, it’s a quiet experience. Not exactly subdued, but peaceful. The music goes plinky-plonk in the background and the pixels dance on the screen.

It made me wonder why I play games like this. My little brother and I have easily 200 or 300 hours in Terraria. We chat absolute nonsense to each other. Lego talk. I played Core Keeper with four other friends and the same was true. Just a free and easy experience where the words just come out, and you giggle a lot at stuff that isn’t funny. Occasionally the game throws something at you to unite everyone behind a cause. The farmer drops their scythe, the explorer drops their torch, and everyone hurries over to one part of the map to stare in wonder at the giant slime boss hidden in the shadows.

There’s the answer, that’s why I can’t stop digging tunnels with my trusty pickaxe. I don’t really want to stop playing. It’s a shared experience. When my little brother says, “Oh, I have to go for dinner,” or my friends say, “Need to pop out,” the time seems to have disappeared. Small and manageable chunks of time, little easy-to-complete tasks – Core Keeper is comfortable, the sort of game that makes you feel nostalgic even though you’ve never played it before.