If you’ve played Dark Souls, you know the anxiety of opening a chest. If you haven’t, you probably expect something innocuous like a neat new sword to stick up the boss' backside. Sometimes that’s true, but there’s always a slither of a chance that you’ll get a serpentine tongue lapping at you with the weight of Hulk Hogan’s right hook and two arms reaching out to hug you like an overbearing grandparent on Christmas. That’s because Dark Souls has Mimics, inanimate objects that we’ve been conditioned to associate with treasure and all things good, now potentially holding the key to our death. Pokemon has just introduced its first-ever, honest-to-god mimic with Gimmighoul, and I can’t wait.

I love when games are dicks, and Pokemon has the perfect opportunity to be a big one. Picking up items is a pretty safe bet and it always has been – you’ll get a crappy low-level potion, a Poke Ball to add to your growingly obsolete collection, or some other random item – like a berry – that you swear you’ll use, only to beat the game without ever having touched it. But what if that item leapt out at you and punched you in the teeth? We wouldn’t expect it, because Pokemon has stuck to its rules of fairness pretty rigidly, but by lulling us into that safety, it’s paved the way for that exact kind of uppercut we won’t see coming.

It’s already touched on the idea with Voltorb, the Pokeball-looking Pokemon that you can interact with like any other item. Only, if you do, you start a battle. But Voltorbs don’t tap into Pokemon’s signature randomness since they stay the same each playthrough – In nearly every enemy base in the series, there will be a collection of four balls, some of them Voltorbs or Electrodes and others items. The element of surprise is completely negated when Voltorbs become formulaic. Even Dark Souls has a similar problem, you can figure out the tells – the chest slightly moves because it’s breathing, or you’ve played the game before and know each and every spot. But with Pokemon’s RNG dialled up to 11, every run could shift which chests are real and which are mimics, keeping us on our toes. 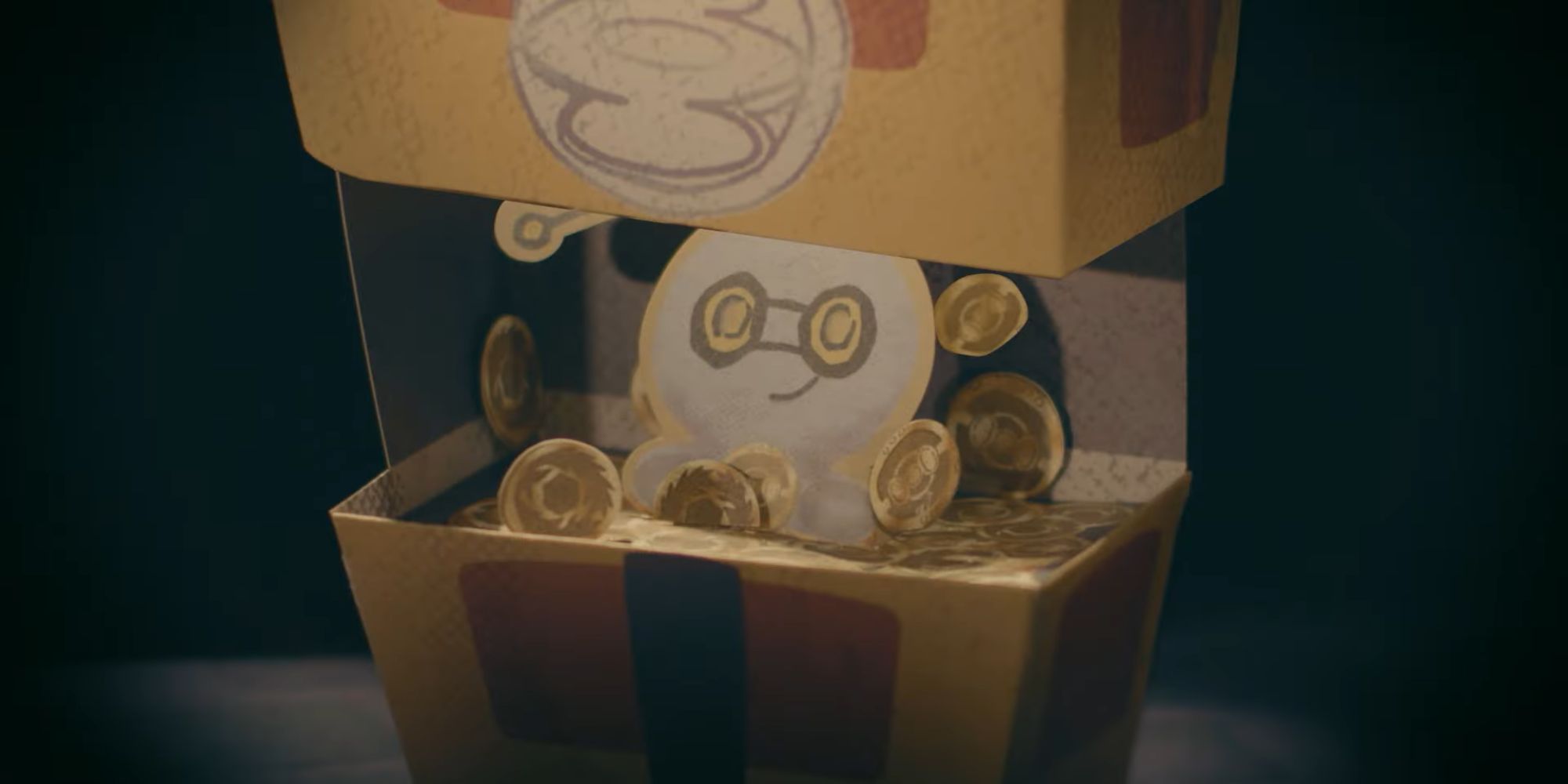 What’s more, Gimmighoul isn’t the chest itself. They’re a Reddit-icon-looking crypto bro that hides in dark, unlit spaces, waiting to rope you into a pyramid scheme of Tackles and Growls. That means they aren’t limited to chests. Game Freak could have them pop up in all sorts of places, like false cuttable trees, fake out smashable rocks, bags, or any other interactable object. The point of Mimics is to make mundane clutter less mundane, giving it a new spark of life as you never know if it’s safe to risk it, and Game Freak has found the perfect way to do just that. If you’re on a Nuzlocke run with little health, scraping by as you crawl to the next Pokeenter, a random mimic could ruin you, but a Potion could save you – would you take the gamble?

I probably wouldn’t, but I’m a complete coward who is terrible at Pokemon (read: never uses the berries, HMs, TMs, or other items that require me to wrap my head around the nitty gritty mechanics). Or, if I did risk it, it’d push me to play better. Take Dark Souls for example: you don’t want to risk getting chomped on when you’re at low-health because you could be plunged back to the bonfire and forced to fight your way through all those enemies again. So if you want to grab the loot, you play more carefully and strategically. Part of that stems from the fact that Mimics are tougher than normal enemies and take a chunk out of you just for opening them up, something Pokemon should also take note of – if they’re run-of-the-mill encounters, like Voltorb, there’s no real difference or risk to walking through the tall grass.

I don’t know if Gimmighoul will be a good use of the Mimic model or another way to bring in random encounters on the same level as any other ‘mon, but I’m excited that Pokemon is finally taking the leap to touch on something long left untapped. Randomness doesn’t need to be limited to archaic battle encounters, it can easily be a natural part of the environment, and the franchise already turns everyday objects like piles of rubbish and teacups into ‘mons. Combine that with jumpscares and it’s the perfect way to keep the series’ RNG roots going, especially as we move to real-time ‘mons walking about like in Legends: Arceus and Let’s Go. We can easily avoid those now, but it’ll be much harder to avoid a little goblin leaping out of a chest to tell us all about Gabitecoin.