Windbound tasks you with surviving a voyage through the sea using nothing but your wits (and a handy recipe book). 5 Lives Studio’s twist on the “survive and craft stuff” genre comes in the form of sailing on your own makeshift boat and exploring randomly generated islands.

Before you start, it’s a good idea to check your difficulty settings – Survivalist difficulty is the default-looking middle option, but select it and death will bring you all the way back to the first island in chapter one, with most of your inventory gone, and the island layouts refreshed. If that doesn’t sound fun, select Adventurer, which will only bring you back to the beginning of the chapter you're on when you die, with all of your items retained. Here are some more tips to help you make the most of your journey.

Casting Off In Chapter One 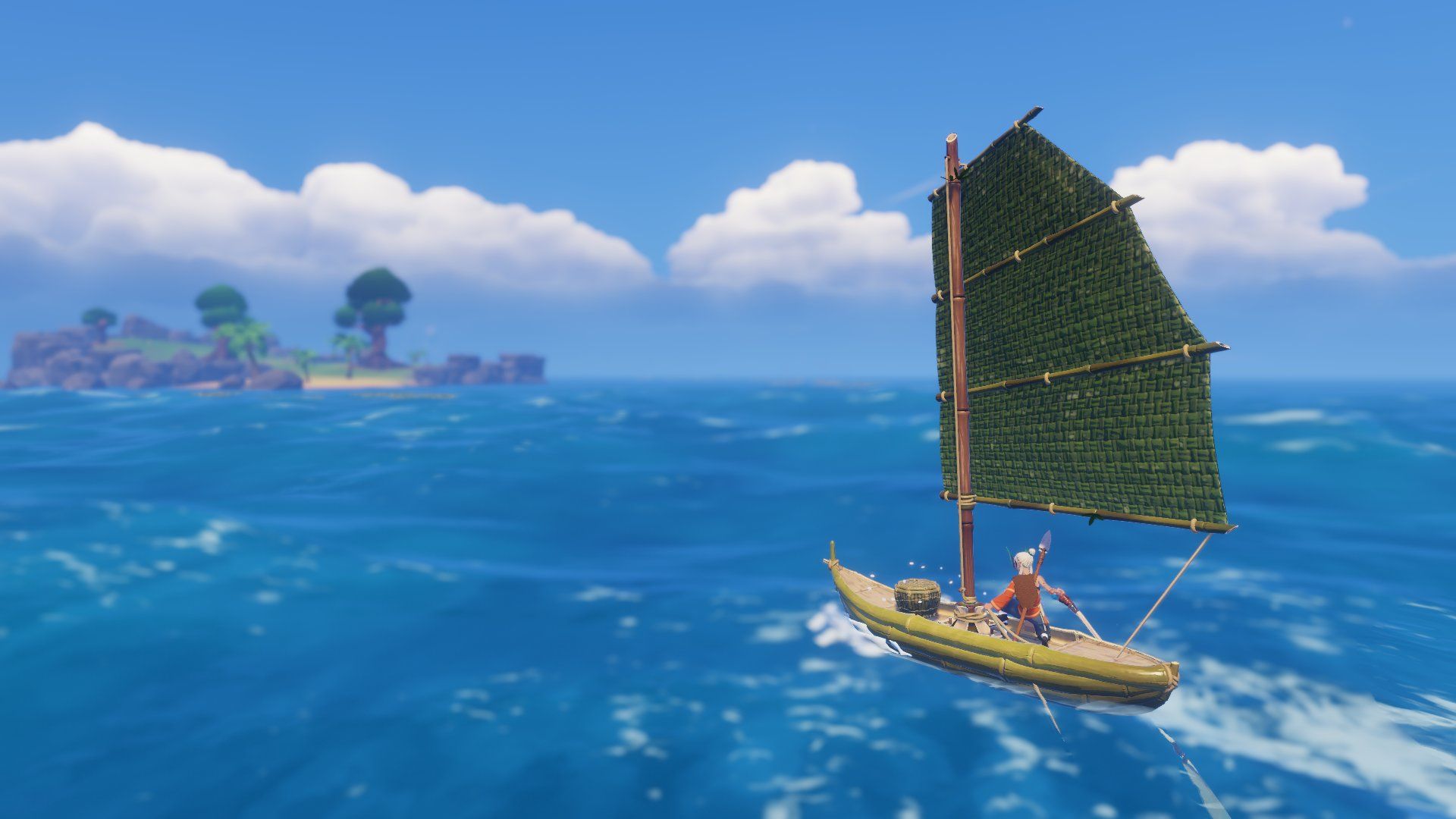 To start with, you’ll wake up on an island, the first of many. So begins Chapter One of Five. Each chapter contains a bunch of islands for you to explore and gather resources, with each being more complex than the last.

Chapter one’s pretty simple – the first island or two you can access without a boat, but you’ll need one to get much further. Explore your surroundings and you’ll find some of the most basic resources, like thick grass and sticks, plus some basic enemies like Razorbacks from which you can get raw meat. You’ll need to use sticks and grass to make a fire to cook meat, as raw meat only regains stamina, not health.

Your stamina is lost over time – you’ll need food to manage it and regain health, so be on the lookout for berries and mushrooms, which can be stored or eaten immediately. Once you’ve found the oar on the first islands, and you’ve got enough grass, make your boat and cast off! 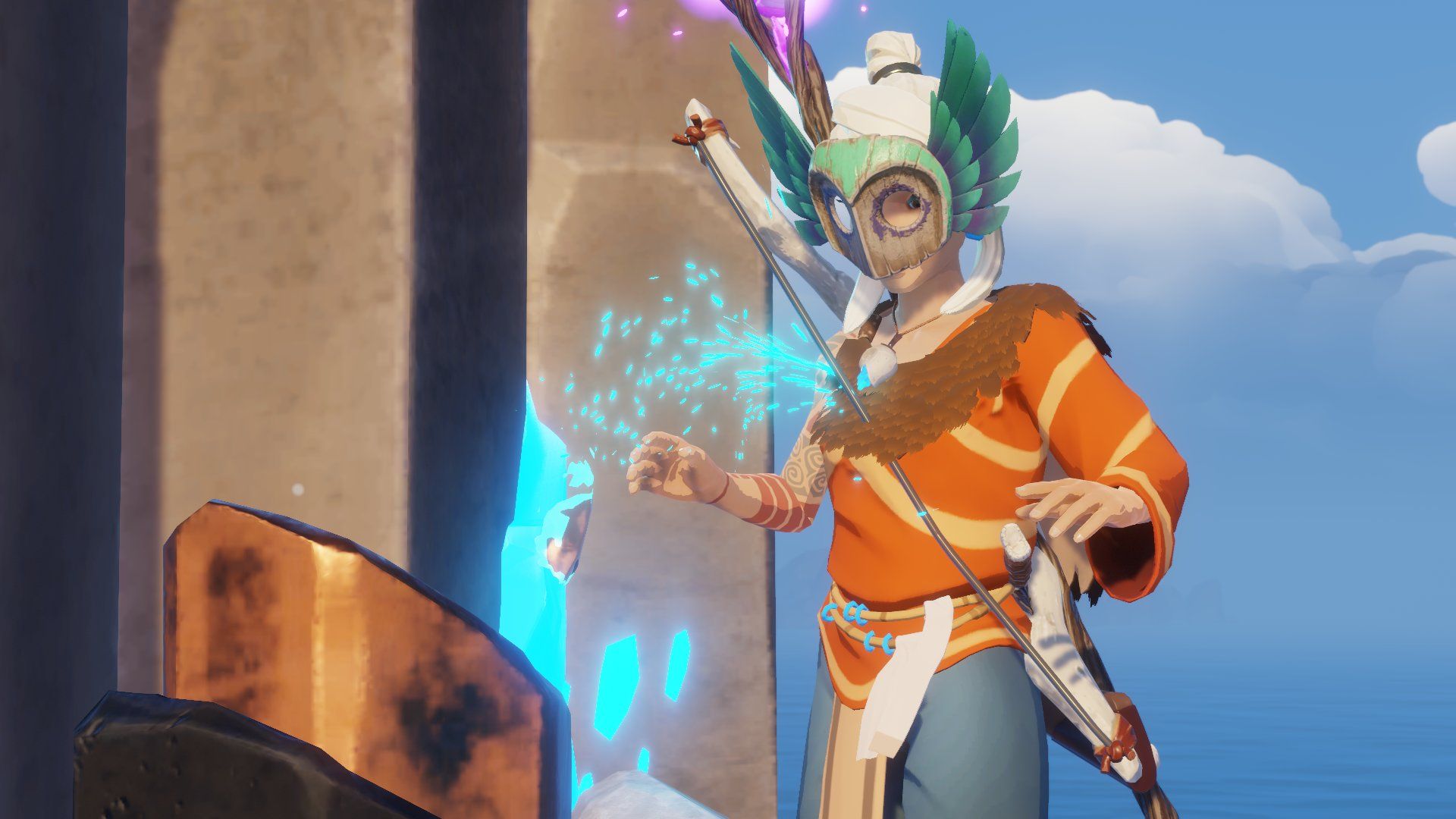 The ultimate goal of each chapter in Windbound is to find the three keys scattered across the islands – these are fairly easy to find at first, but it becomes harder as the chapter layouts become more complex. Most keys are found at the top of a stone column on an island – you’ll need to climb it to get the key.

Some columns may challenge you to a basic puzzle or task like shooting a gong to unlock steps to climb, and some later in the game may have had the gong stolen and replaced with a map pointing to its location. In that case, you’ll need to go there, dig it up with a shovel, and return to the column.

Once you’ve found the three keys, you’ll need to find the exit island, which is made entirely of stone and contains three slots for the keys, which will reveal the exit when unlocked. After a boat sequence and the opportunity for upgrades, you’ll be in the next chapter amid a new set of islands.

If you’re struggling to find a key but you’ve found the exit island, you can interact with a key slot to see the direction you need to head in.

Crafting And Other Useful Items 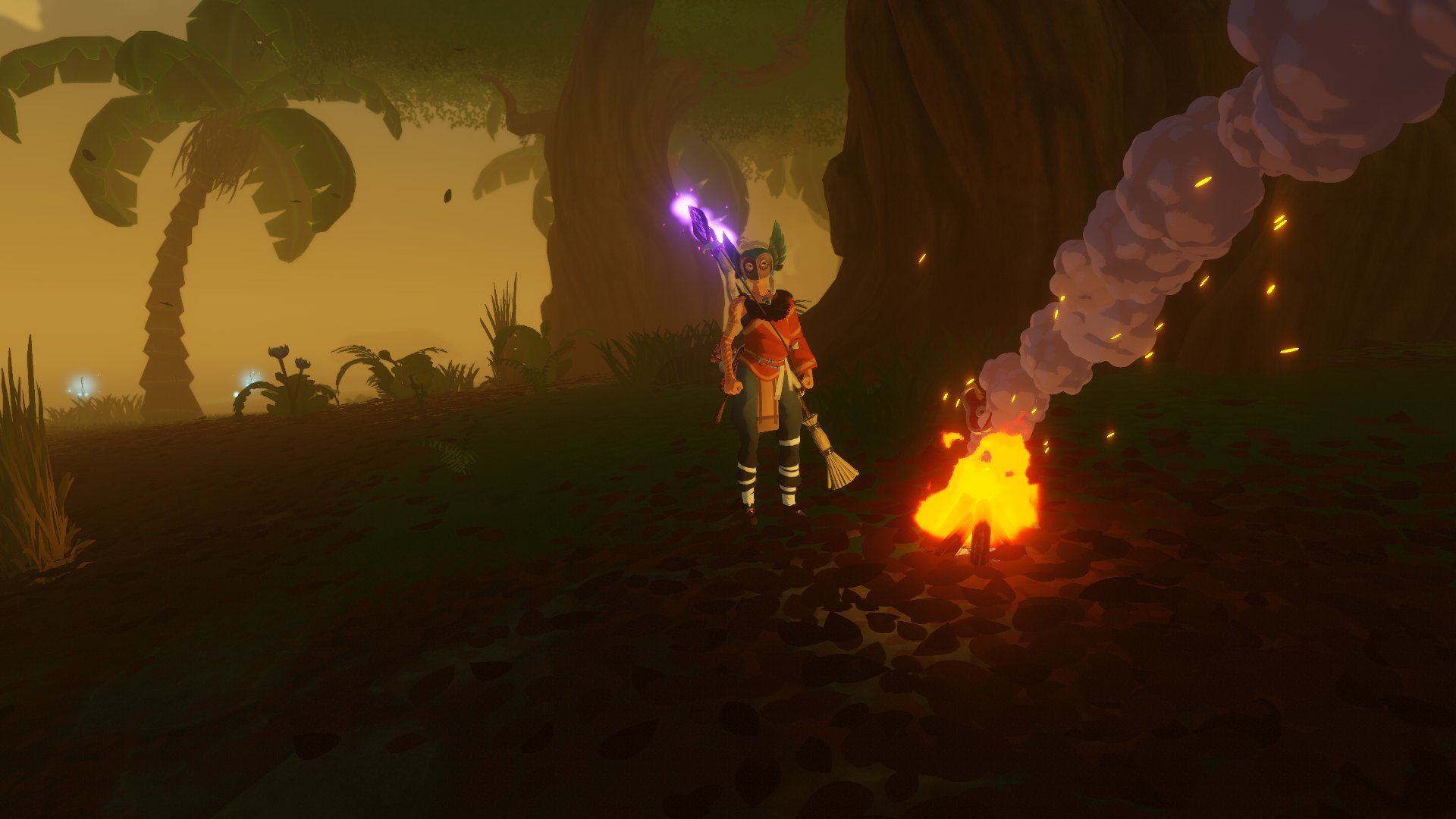 Across its chapters, Windbound will steadily introduce more resources and recipes – including tools for gathering, tougher boats, and better weapons. Recipes are saved as you find new items so there’s no need for memorisation.

Most recipes, tools, and items are pretty easily found should you explore and gather enough, but some are more hidden and require defeating certain enemies or mining rare stones.

Here are all of the basic recipes in Windbound, including all the equipment you'll need, and what's required for them. 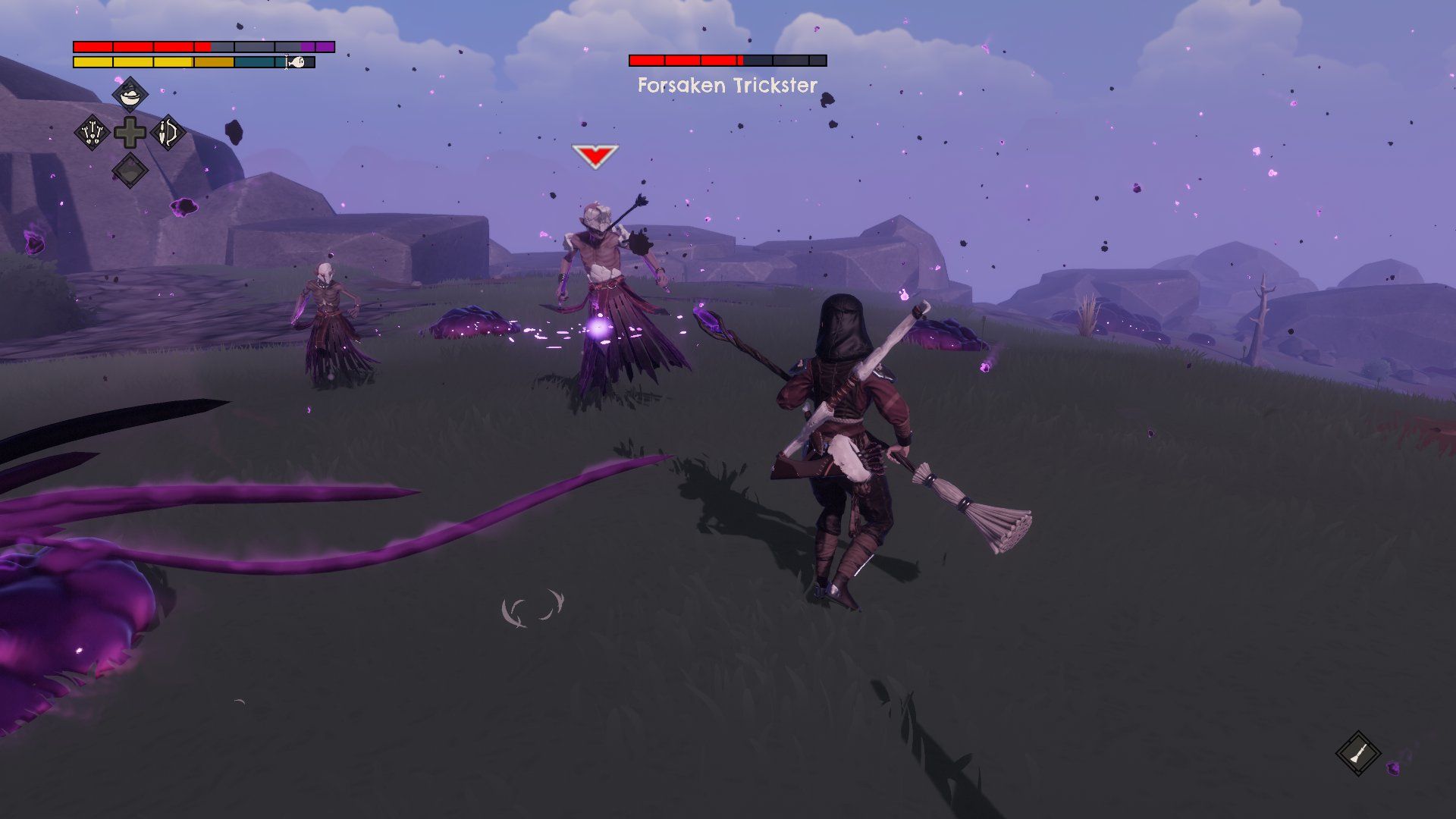 In the early chapters, you’ll encounter some tougher enemies like Gorehorns, but you don’t need to worry about fighting them straight away (or even at all) to make progress. As you progress into Chapter Two, you’ll find the materials necessary to upgrade from your starting knife to spears and bows, which will prove useful for the more menacing creatures should you want to tackle them.

You can also find combat upgrades next to burning campfires, such as the Parry and Dodge – both of which give you an opportunity to counter-attack. Going on the defensive with these is a good strategy as most enemy attacks are easily avoided.

If you’re running low on health, flee and come back later – enemy health doesn’t recharge quickly, so you can get away and recharge your meters before engaging again. Enemies don’t chase for long, and most can’t do much if you’re standing on a large rock, so use them to your advantage. Many also sleep at night, making surprise attacks or sneaking past them easier. 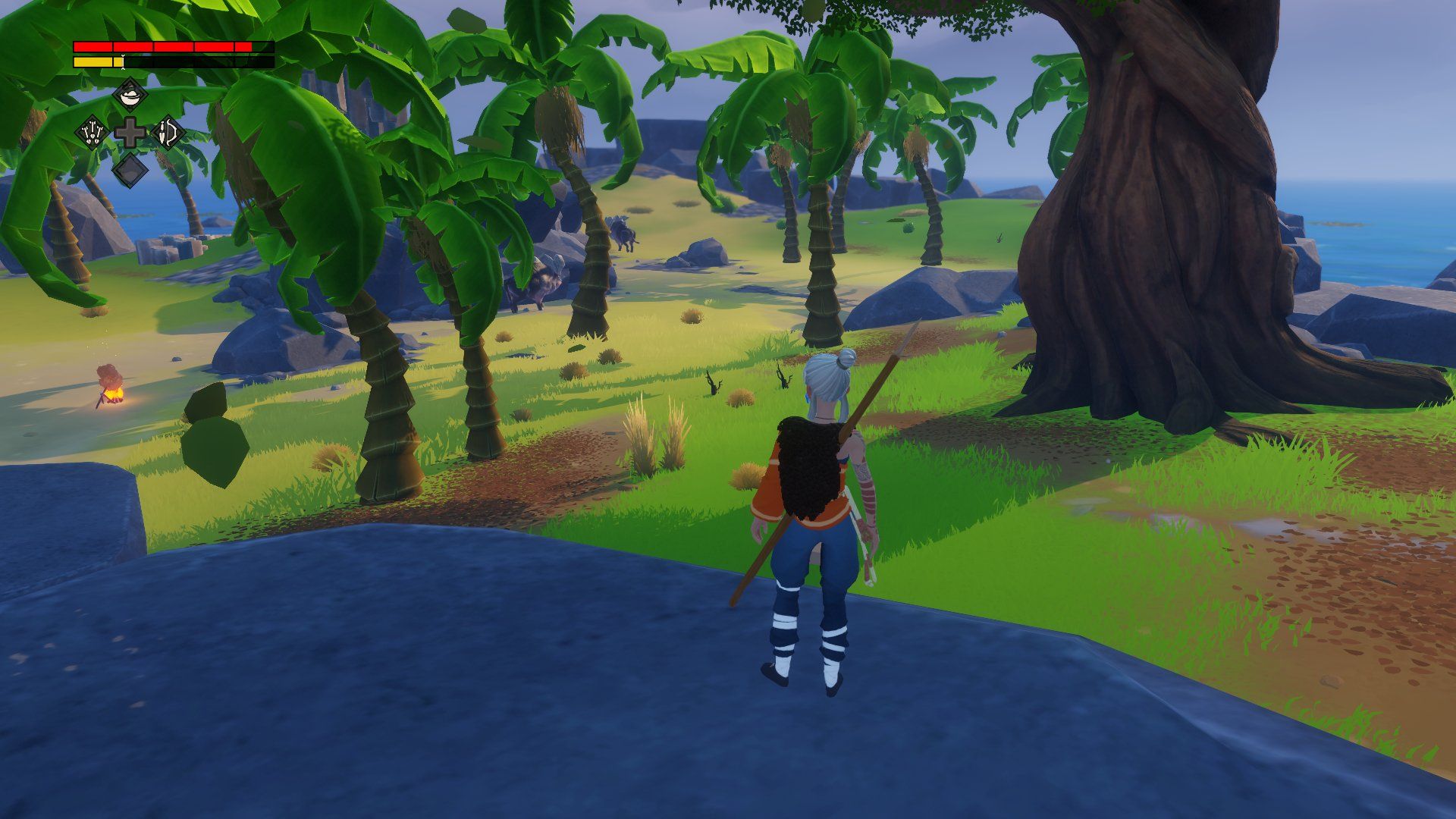 An early priority should be crafting a bag. It will give you much more space for items, and you can craft bigger bags later. You can also craft a bag or chest for your boat. Store other items you don’t need immediately inside.

When you’re running low on space, consider which items are easily found or crafted and which aren't. Tall grass and rocks are plentiful, so if you’re in need of an item slot, they’re a good thing to ditch. You can also browse your recipes for ways to make space – for example, if you’re holding animal skin as well as leather, turn it all into leather (at a fire) to free up a slot. Or use up your remaining sticks to craft arrows (if there's nothing else you're holding on to sticks for).

When it comes to non-emergency food, look for berries and mushrooms you can eat without dipping into the more precious meat in your inventory. Though be warned, meat does degrade over time, so don’t hold on to it for too long.

Should you die on Survivalist difficulty or higher, the only items that will be saved are your key items and your held items. So put the stuff you really don’t want to lose, like tools and weapons, into your held item slots. That way you won’t be starting from square one. 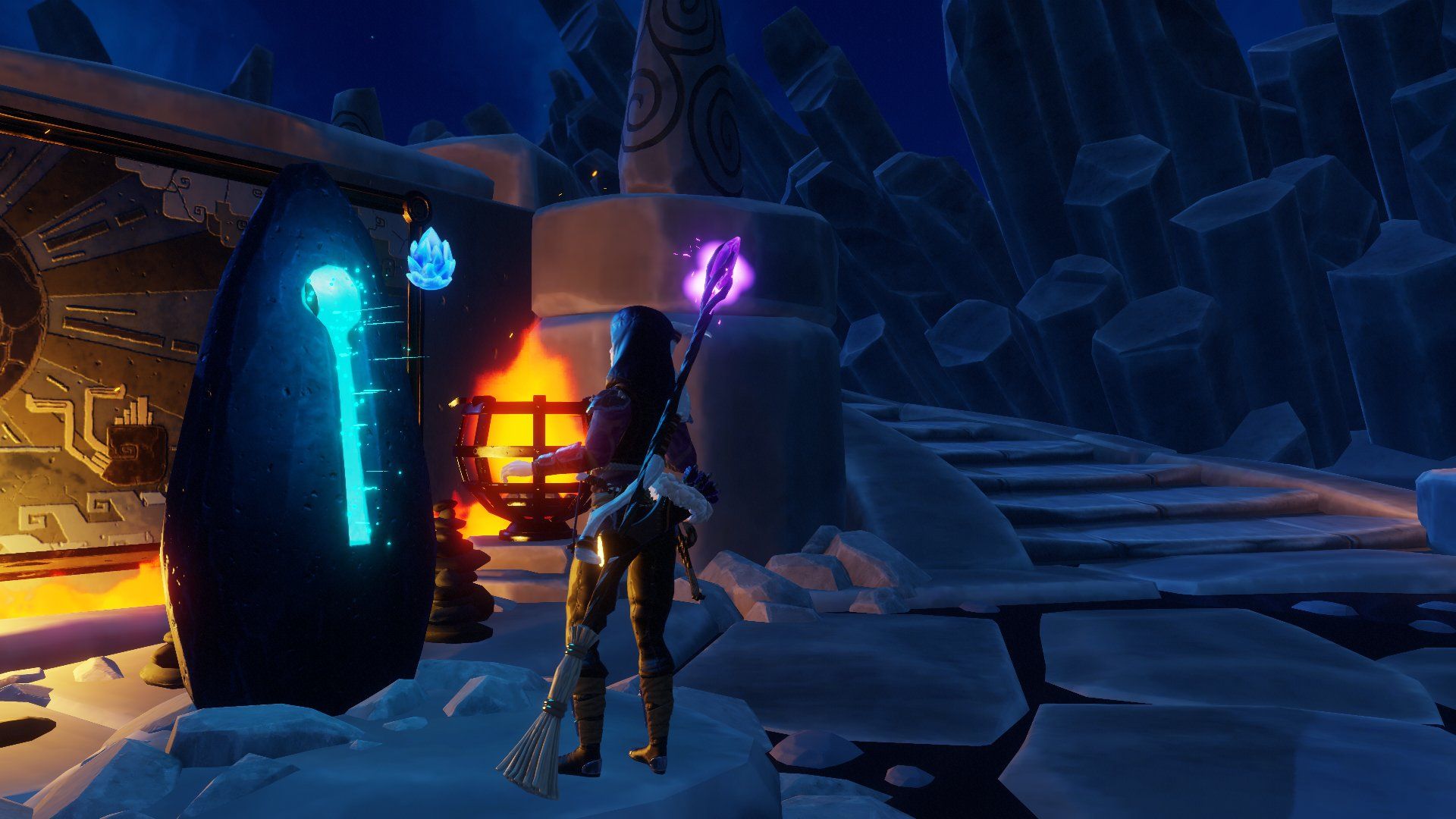 Between chapters, you’ll have the opportunity to acquire permanent upgrades (Blessings) at a shrine. These will vary in usefulness according to your playstyle, but some can prove essential. Blessings include the Sea Witch Staff, which is an unbreakable spear that fires homing projectiles, and Gortl's Fortitude, which greatly reduces poison. The price for these is sea shards, which are earned whenever you find a key, and also from pots found on islands. At first, you’ll only have one upgrade slot, but you can use sea shards to buy more at the shrine.

Tiny, easy-to-miss islands can provide rewards. They can contain sea shards as well as other permanent upgrades in the form of boosts to health and stamina. Larger islands can also contain these, so even if there’s no key in sight, it’s still a good idea to explore each island thoroughly. Pumpkins are another easily missed treasure – finding one unlocks another upgrade for the shrine, so keep an eye out!