For as long as anyone can remember, World of Warcraft has always featured static flying. It’s a simple system, allowing you to leisurely glide through the air and hover wherever you desire. This system, and the flying mounts that accompany it, have been staples of the game since it was introduced.

However, Blizzard has taken a step in a bold, new direction with the latest expansion, Dragonflight. It features a brand-new system called dragonriding, along with its own talent tree, and it comes with its own set of unique challenges and obstacles. Here’s everything you need to know about how to fly in the Dragon Isles. 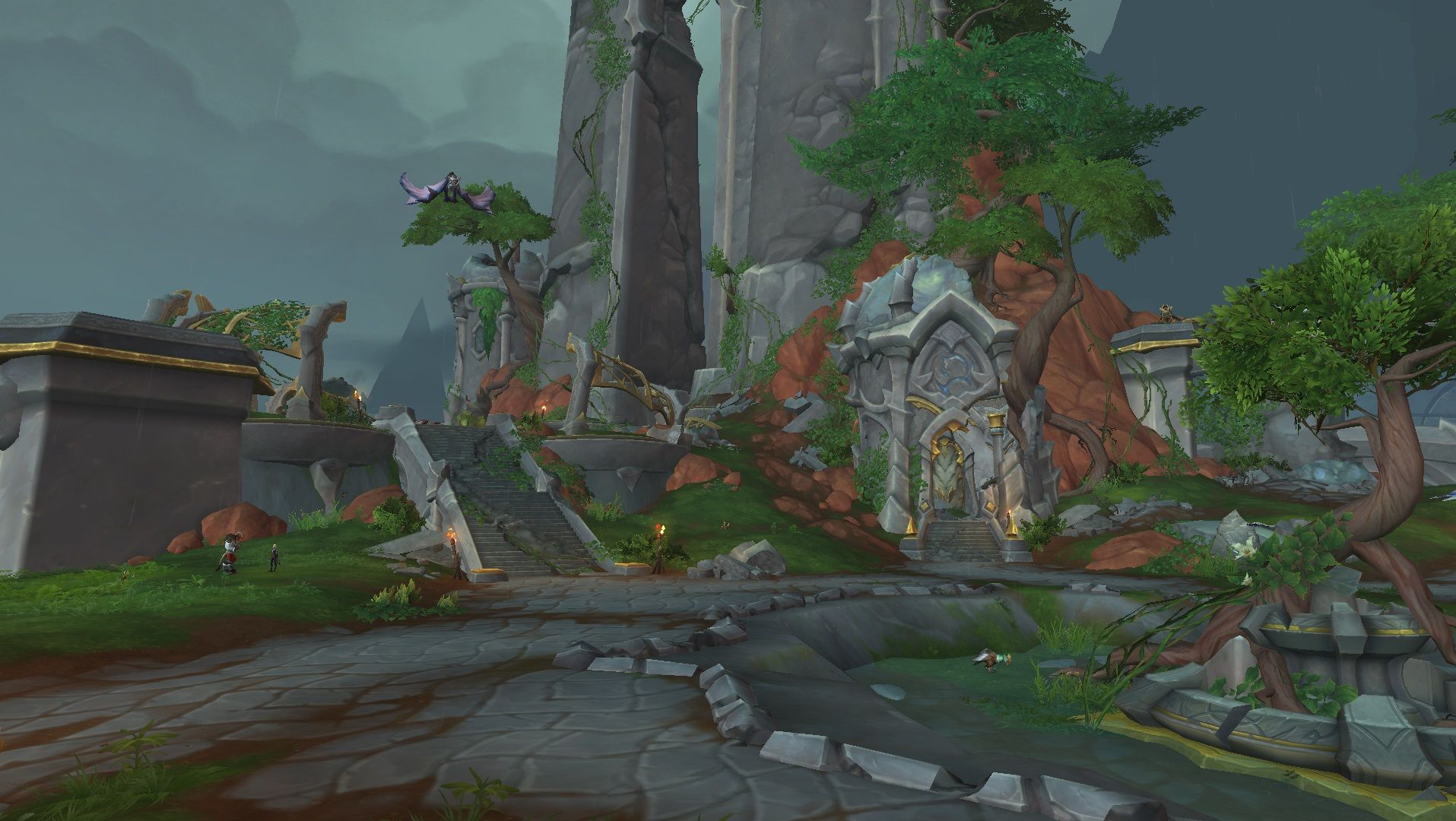 While there are no Pathfinder achievements to see here, dragonriding will not be available to you as soon as you land in the Dragon Isles. First, you have to quest and progress the story up until you meet with Queen Alexstrasza in the Ruby Lifeshrine in the first zone, The Waking Shores.

Upon talking with the Queen of Dragons, the campaign will split into two questlines. One continues the story of The Waking Shores, while the other, simply named "Dragonriding," will allow you to obtain your very first drake mount and unlock dragonriding. Once you've obtained your mount from this first quest, you'll progress through a host of smaller quests to teach you about the system, akin to learning how to Soar as a Dracthyr in The Forbidden Reach.

From there, the questline will bring you to the Skytop Observatory, where you can find further information on Dragon Glyphs, the talent tree, and the Rostrum of Transformation, where you can customize your own dragons.

Though you’ll be limited to a red Renewed Proto-Drake mount at the beginning, you’ll earn up to three more dragon mounts, with those being the Windborne Velocidrake, the Highland Drake, and the Cliffside Wylderdrake. These can be earned by completing the storyline in the Ohn'ahran Plains, the Azure Span, and Thaldraszus, respectively. 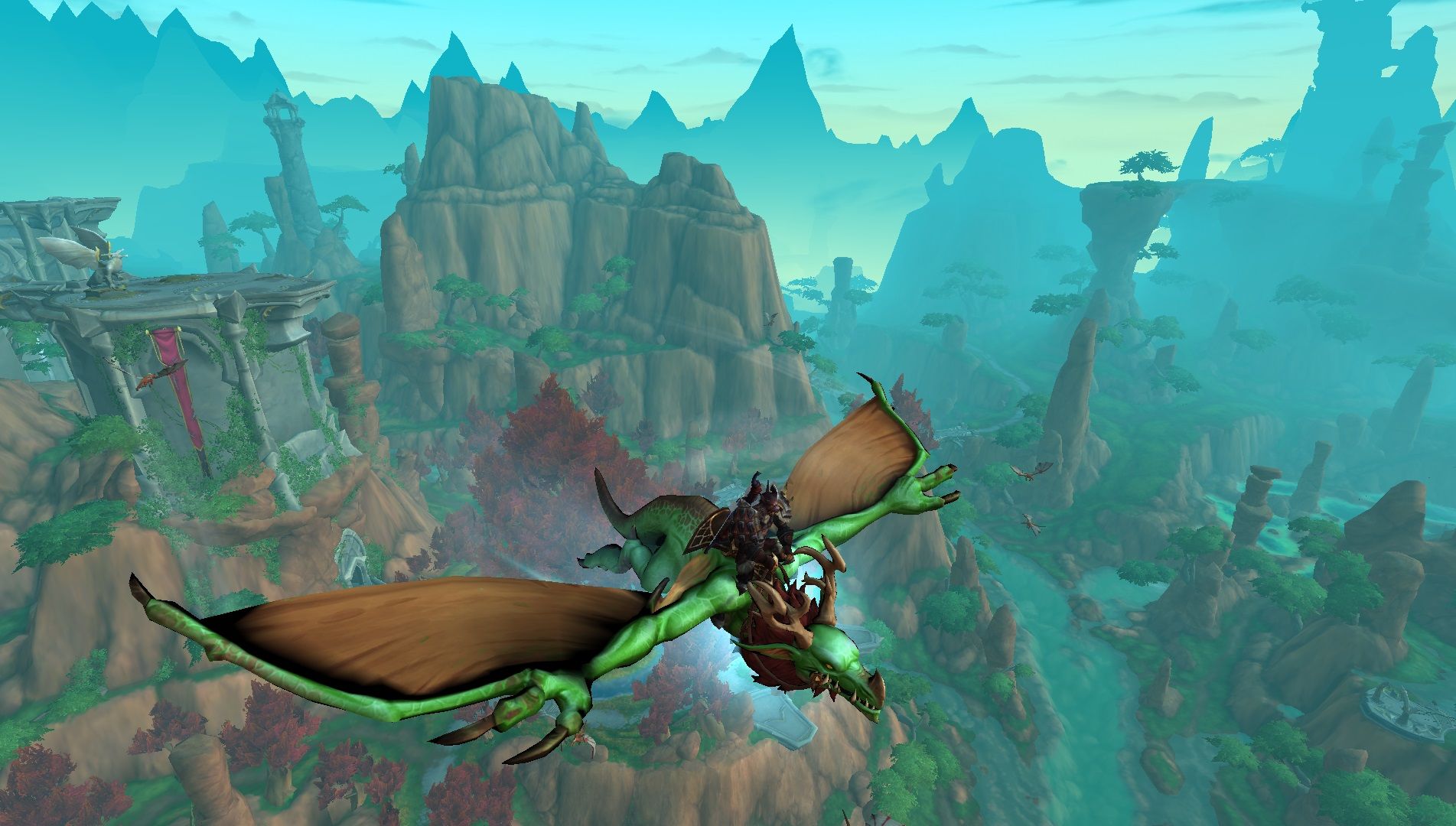 Unlike the old static flying, which allowed you to have absolute control over your movement, dragonriding is much more dynamic. It mixes physics into the system, introducing real-life elements like pitch and momentum to make you think more about how you fly around. In addition, it removes the ability to hover in the air.

The system is also limited to a resource called vigor, which you spend to use your dragonriding abilities, like lifting off or going faster. Vigor regenerates over time on the ground or at maximum speed in the air, and although you’re limited to three points of vigor at first, you can increase this through the accompanying talent tree.

To some, dragonriding could seem like a setback from static flying. However, the new system makes up for this by allowing you to increase your speed up to 830 percent, more than twice as fast as static flying’s 310 percent increase. 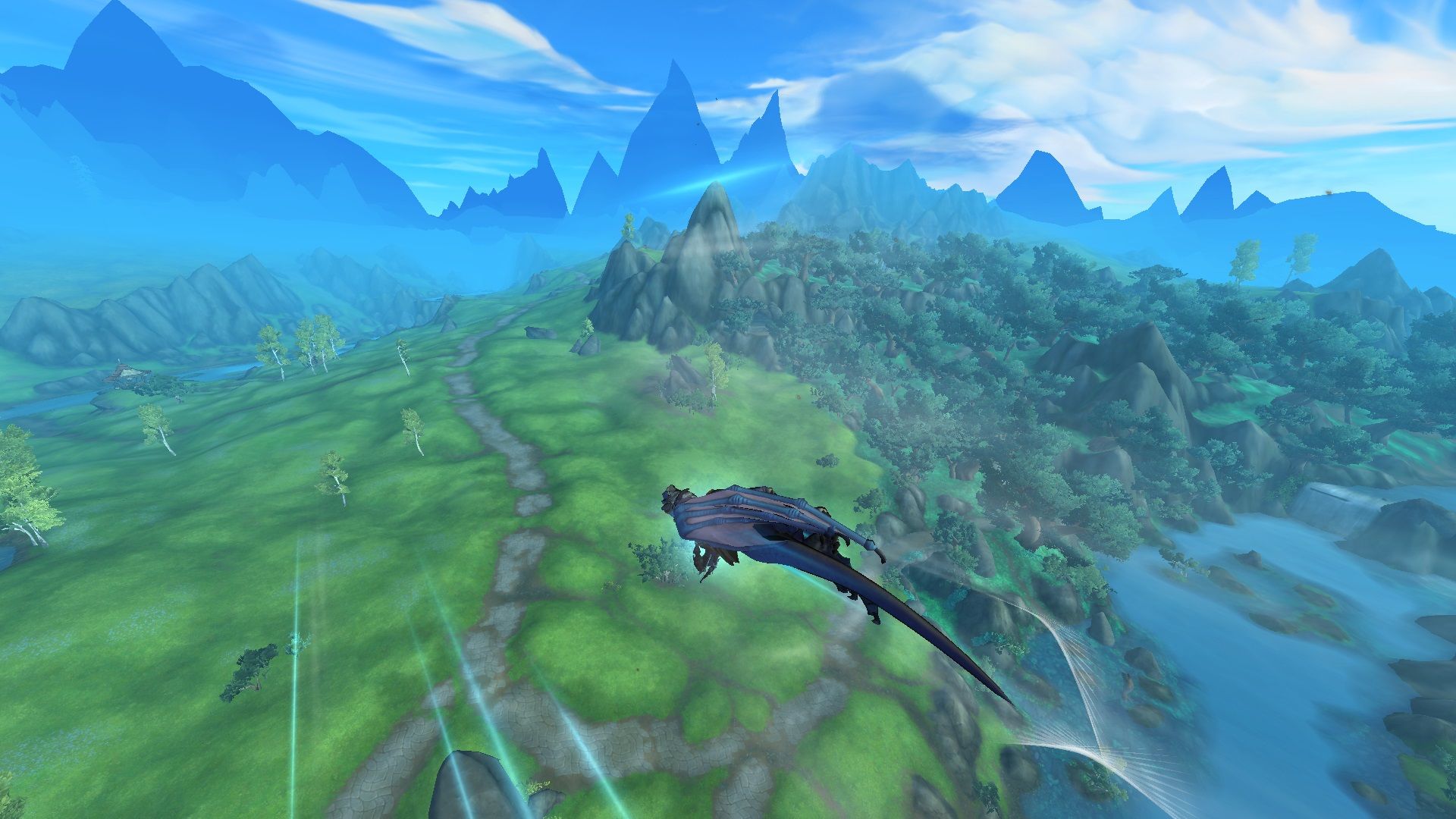 The most useful ability available to you is Skyward Ascent, which is used to take off from the ground and keep yourself in the air by gaining even greater heights. Meanwhile, Surge Forward is useful for climbing to max speed if your dragon is traveling horizontally. Both of these are unlocked automatically, giving you the basic tools you need to learn dragonriding.

Whirling Surge and Bronze Timelock are both situational abilities, unlocked at the same time as the Highland Drake and the Cliffside Wylderdrake, respectively. While you may not use them during every flight like the other two, they’re both very useful in world PvP. 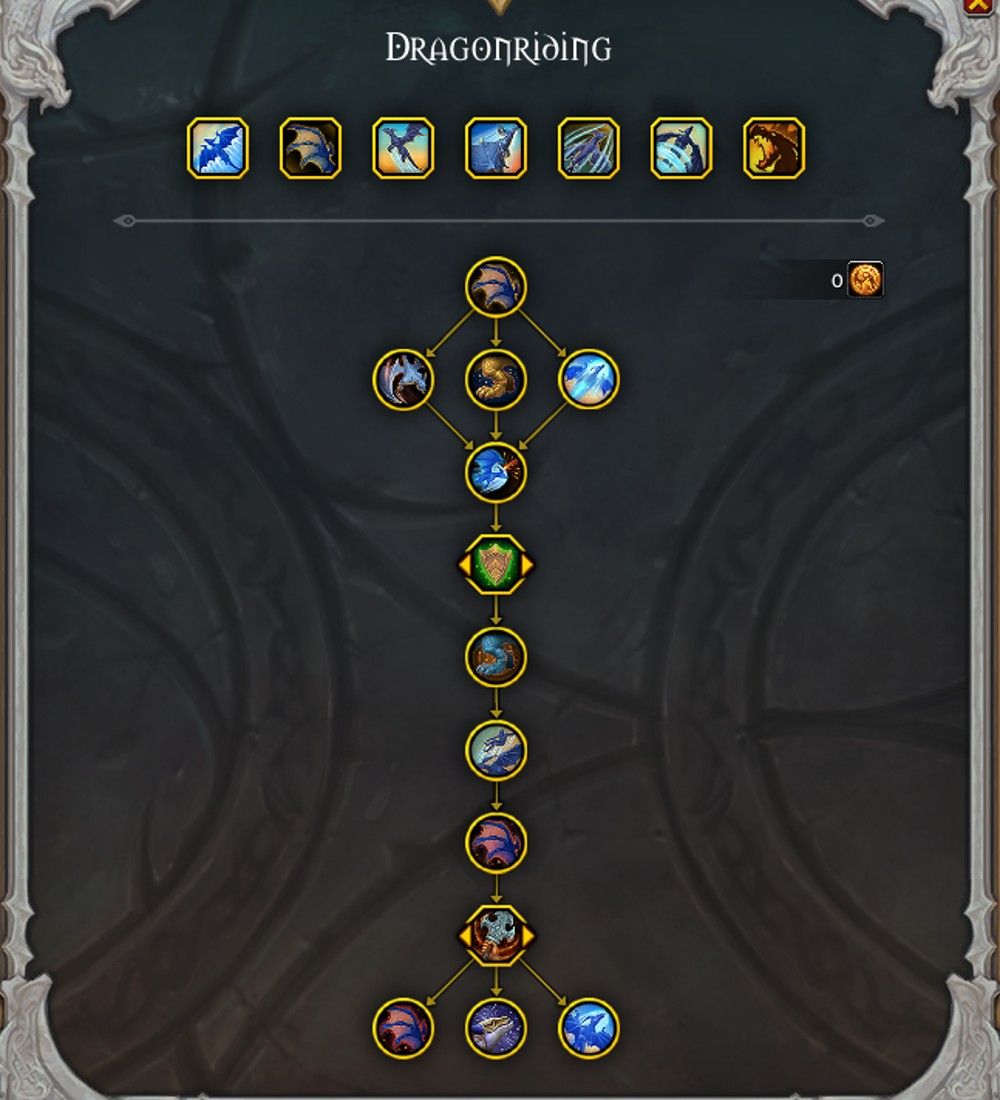 As you fly around the Dragon Isles and explore new areas, you’ll come across floating tokens called Dragon Glyphs. You can use these to unlock new passive abilities and upgrade existing ones via the new dragonriding talent tree.

This system should be familiar to long-time players, as it’s reminiscent of artifact weapon trees or the Heart of Azeroth’s system. However, unlike those examples, Dragon Glyphs are account-bound, which means that for every one that you collect, you can also spend it on your other characters.

The talents themselves are self-explanatory, sporting such upgrades like increasing your vigor capacity to six or allowing your vigor to regenerate faster. However, there are a couple notable choices where you may pick one talent over another.

Dragonrider’s Cultivation is key if you soar around to gather resources for professions, but if you’re questing or PvPing, taking Dragonrider’s Hunt may be preferable. 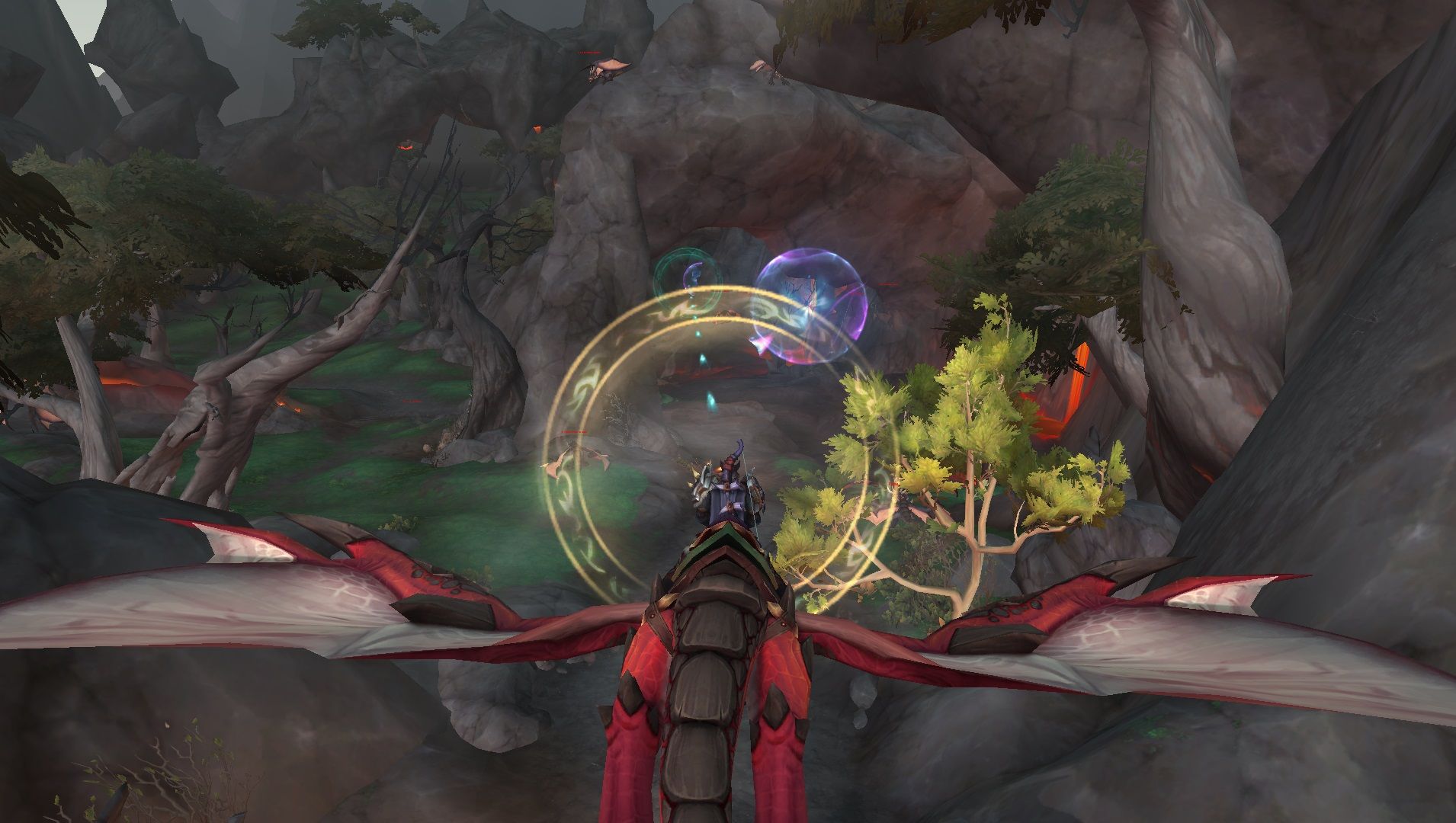 Finally, there’s one last dragonriding activity to consider. You can partake in optional obstacle courses around each of the four zones which require you to fly through a series of gold rings against a timer. You may earn bronze if you complete the course casually, but if you want the silver or gold achievements, you’ll have to push your dragon to its limits.

After you’ve completed all of the dragon races, you may go back and request advanced courses, which can be surprisingly difficult. These consist of the same tracks from before, but their time requirements are tighter and there are more obstacles thrown in your way.

While it is optional to do these races, completionists may be attracted to the rewards, which are often more customization options for your drakes. While scale colors are limited to reputation grinds, you can expect to pick up a few new hairstyles and armor colors for reaching the upper echelon of the elusive gold times.