X, X, X, Y, pow. The thug is flung to the ground. B. I’ve grabbed him, and now I’m swinging him around and lobbing him into his pals. Y. I’ve lashed out with a full-throttle Heat ability, caving his head into a brick wall. It’s brutal, but as soon as the fight ends he sits up and says sorry with nothing but a bruised ego.

Yakuza might be a JRPG that sees you exploring the open streets of Kamurocho and Sotenbori, but its brawler-inspired combat feels more like a fighting game. There are the signature eccentric combos, devastating moves that would certainly kill enemies in any other game, and over-the-top introductions to boss fights that even Heihachi or M. Bison would think were a bit much. You’re not just smacking heads and firing off guns like in GTA, you’re roundhouse kicking yakuza and spraying foam into the Men In Black’s eyes while Kuze rides in on a motorcycle with a lead pipe. I can almost hear the announcer yelling, “FIGHT!”

There are often complaints that Yakuza’s combat is overly arcade-y and reliant on button-mashing, but that’s the charm. It’s not a hyperrealistic hand-to-hand reenactment or a Souls-like; it takes the traditionally 2D side-scroller fighting format and brings it to small, contained arenas that you can move around in freely. There are environmental cues and finishers just like in Mortal Kombat, but they’re littered around the world you explore. Kiryu and Nishiki’s brotherly beef is a gut-wrenching character drama for the ages, but I took that punk down by slamming a bicycle over his head. Only Yakuza could juggle two distinctly contrasting tones so effortlessly. 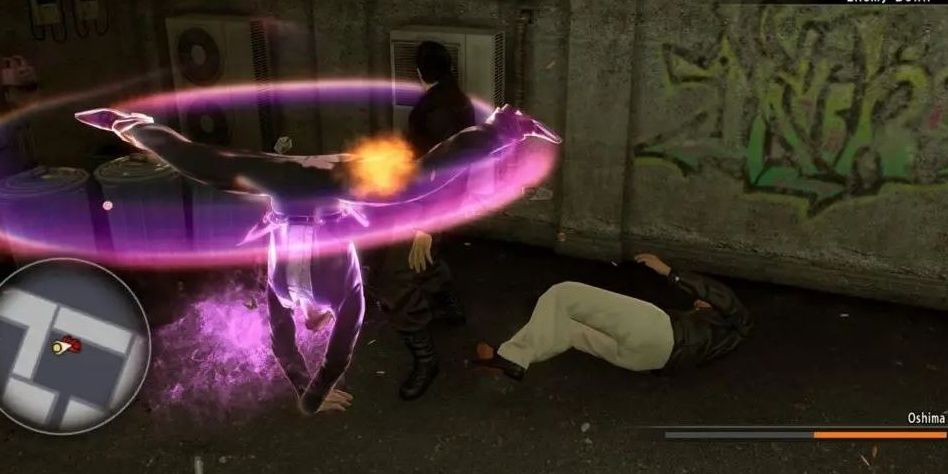 I mention Mortal Kombat because it's the closest comparison of the lot. Heat actions are essentially MK’s X-Ray attacks – brutal and visceral, with a hint of morbid slapstick about it, but not at all ‘real’ in how they impact the world. In Mortal Kombat, I might rip out Mileena’s heart or shove a hook through her chest; maybe even crush her skull so hard that the bone fragments pierce her brain. But afterwards, we’ll be chatting shit and moving on with the narrative. The fights are a game-y sidestep that embraces the medium’s quirks and the thrill of an action set piece fight, even if that would normally hinder the story. You can’t exactly stab Darth Vader and slice his helmet to smithereens in Jedi: Fallen Order because that would break canon, but forget canon. Fighting games are about fighting, combos, and screaming while you slap someone silly.

Likewise, in Yakuza, your fights feel more metaphorical or illustrative than they are a literal part of the story as it canonically happens. For instance, Kiryu makes a point not to kill, so much so that Nishiki swears he’ll be there for him when he crosses that line in Yakuza 0, but in the combat, I’m shoving katanas through people’s stomachs and kneeing knives up their guts. Hell, I can even disarm a guy and straight-up shoot him with his own gun. Afterwards, he’ll be good as new.

Yakuza’s combat is great because it takes that approach down to its core design and slots it into the story and character-driven confines of a JRPG. It sounds ludicrous on paper, like trying to wedge a flight simulator into an action-adventure PS5 exclusive, but somehow developer Ryu Ga Gotoku pulls it off. Kiryu is my Scorpion and Majima is my Sub-Zero—the two might get knocked around, stabbed, shot, flung into walls, chucked out of buildings, and beaten senseless, but they get back up, return the favour in full, and have a little chit-chat with the bad guy as the heartbreak continues.