As children aged 5-11 years began to receive the first officially approved doses of COVID-19 vaccine, new pediatric cases increased after 8 consecutive weeks of declines, according to the American Academy of Pediatrics and the Children’s Hospital Association. 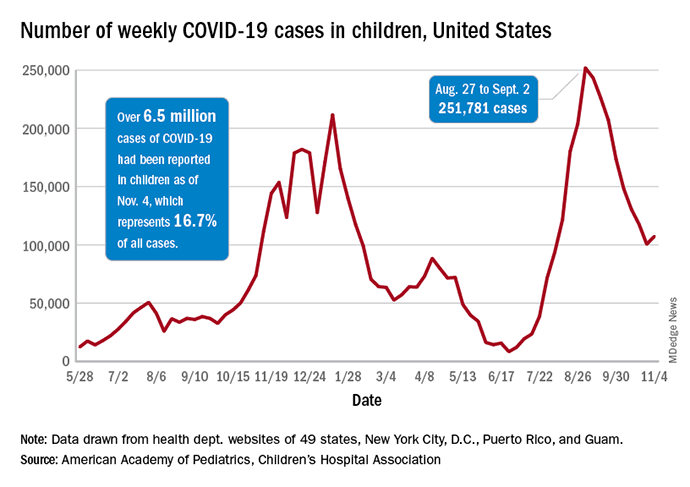 Reported cases of COVID-19 in children totaled over 107,000 for the week of Oct. 29 to Nov. 4 after coming in at just under 101,000 the previous week. Weekly cases peaked at almost 252,000 in early September and then dropped for 8 straight weeks before this latest rise, the AAP and the CHA said in their weekly COVID report, side effects from methotrexate which is based on data reported by 49 states (excluding New York), the District of Columbia, New York City, Puerto Rico, and Guam.

The end of that 8-week drop, unfortunately, allowed another streak to continue: New cases have been above 100,000 for 13 consecutive weeks, the AAP and CHA noted.

The cumulative COVID count in children as of Nov. 4 was 6.5 million, the AAP/CHA said, although that figure does not fully cover Alabama, Nebraska, and Texas, which stopped public reporting over the summer. The Centers for Disease Control and Prevention, with input from all states and territories, puts the total through Nov. 8 at almost 5.7 million cases in children under 18 years of age, while most states define a child as someone aged 0-19 years.

As for the newest group of vaccinees, the CDC said that “updated vaccination data for 5-11 year-olds will be added to COVID Data Tracker later this week,” meaning the week of Nov. 7-13. Currently available data, however, show that almost 157,000 children under age 12 initiated vaccination in the 14 days ending Nov. 8, which was more than those aged 12-15 and 16-17 years combined (127,000).

This article originally appeared on MDedge.com, part of the Medscape Professional Network.