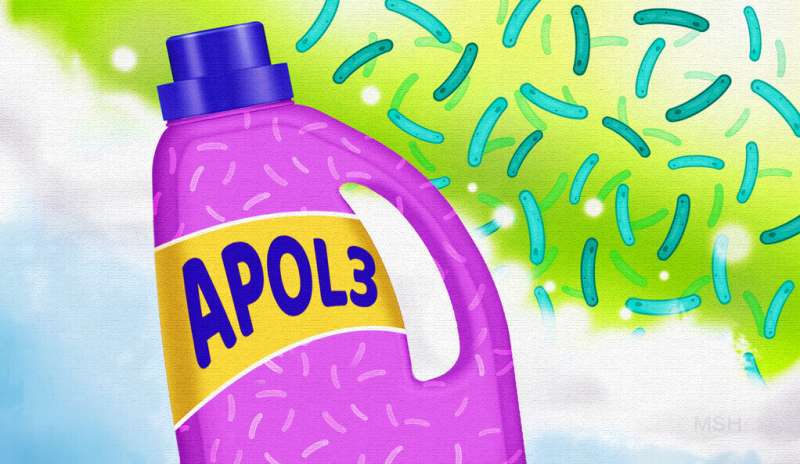 In recent years, scientists have discovered that non-immune system cells are surprisingly well armed to combat infection. Yale researchers have found a particularly powerful weapon in these cells’ arsenal—a protein that acts like a detergent to wipe out invading pathogens much like the way that Ajax cleans dirty dishes or sanitizes a kitchen countertop.

This intracellular cleanser, the researchers say, dissolves membranes of invading bacteria that have replicated in the cytosol, the watery interior of cells. Importantly, the detergent-like immune protein does not harm the membranes of organelles belonging to the host cell, benicar and citalopram drug interactions they report July 16 in the journal Science.

It could also protect against deadly viruses, fungi, and parasites, the authors suggest.

“How non-immune cells defend against infection is a relatively under-studied area, especially since they lack some of the major defense proteins found in professional immune cells,” said senior author John MacMicking, an associate professor of microbial pathogenesis and of immunobiology at Yale and investigator for the Howard Hughes Medical Institute. “In this case, humans make their own antibiotic in the form a protein that acts like a detergent.”

Scientists used to think cells that make up human tissues and organs relied solely on the immune system for protection. The immune system responds to pathogens in waves. When it first detects harmful invaders it launches a generalized assault and then records the pathogens’ specific molecular signatures in order to produce antibodies to protect the organism against future attacks. However, antibodies are less effective against pathogens that have already penetrated the interior of cells, which is when the cell’s own defenses are engaged.

For the study, a team at the Systems Biology Institute on Yale’s West Campus—led by MacMicking and Ryan Gaudet, a postdoctoral associate in his laboratory—screened about 20,000 human genes looking for those that play a role in intracellular defenses. Cells that have been activated by interferon, the immune system’s early warning signal, express a particular set of proteins within the interior of the cells. One of those proteins, APOL3, binds to and destroys the inner membrane of virulent bacteria like salmonella and kills them. The protein works together with a second immune protein, GBP1, which can pierce the outer layer allowing APOL3 to deliver the fatal blow, the researchers found.

The team also found that APOL3 can distinguish between the membranes of bacteria and those of key cellular organelles such as the energy-producing mitochondria that are crucial to the host cell’s survival.

This novel defense system is present in many cells that interact with the surrounding environment, including the epithelial and endothelial cells that make up our mucosal and blood-tissue barriers. These cells are often the first exposed to infection, so having their own mechanism to help combat intracellular bacteria is important to human health, MacMicking noted.