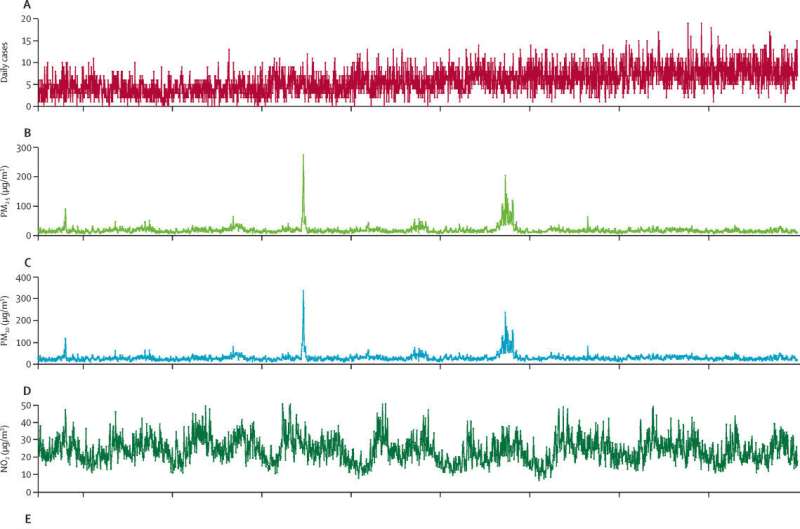 Small particles in air pollution in Singapore might have caused sudden cardiac arrests in some people who were not in hospital but simply going about their normal lives, according to scientists at Duke-NUS Medical School working with the National Environment Agency (NEA) as part of the Pan-Asian Resuscitation Outcomes Study (PAROS).

Published in The Lancet Public Health, this finding, which is based on data collected between 2010 and 2018, resolves the uncertainty caused by inconsistencies in earlier studies due to limitations in the availability and quality of environmental and disease data.

The study team, which comprises members from NEA’s Environmental Health Institute and the Environmental Monitoring and Modeling Division of the Clean Environment Group, assessed whether there was a correlation between out-of-hospital cardiac arrests (OHCA) and the levels of tiny air pollution particles that are at least 25 times smaller than the width of a human hair. This PM2.5 category of particulate matter is known from previous research to significantly increase the risk of cardiovascular, respiratory and even ocular diseases.

“We have produced clear evidence of a short-term association of PM2.5 with out-of-hospital cardiac arrest, which is a catastrophic event that often results in sudden death,” said Adjunct Assistant Professor Joel Aik, lead investigator of the study from Duke-NUS’ Pre-Hospital & Emergency Research Center (PERC).

This study, which follows a methodology similar to that used in studies referenced by the World Health Organization to set air quality guidelines, based its findings on data reported to PAROS on all cases of OHCA in Singapore between July 1, 2010, and December 31, 2018. The timing of these cases was compared with the daily air pollutant levels over the same period.

Statistical analysis identified 492 out of 18,131 OHCA events that the researchers were able to attribute to an increase in PM2.5 concentrations either on the day of the cardiac arrest or up to two days before. The study also identified a clear reduction in risk from three to five days after exposure to the pollutant, suggesting a relatively short-term effect.

“These results make it clear that efforts to reduce the levels of air pollution particles in the 2.5 micrograms or lower range, and steps to protect against exposure to these particles, could play a part in reducing sudden cardiac arrests in Singapore’s population, while also reducing the burden on health services,” said Dr. Aik, who is also an environmental epidemiologist with the NEA.

He emphasized the relevance of this research to many cities around the world where air pollution is an everyday problem. Less common but extreme events, such as haze and wildfires, can also lead to sudden and dramatic increases in PM2.5 particles. Despite the consistency in study findings with those elsewhere, and a biologically plausible mechanism of effect of PM2.5 on OHCA events, he cautioned that this was an observational study and does not imply direct causation.

“This study provides strong evidence for the impact of air quality on health and should stimulate policy and ground efforts to manage emissions from key sources that can lead to PM2.5 increases,” said Professor Marcus Ong, director of the Health Services & Systems Research Program and PERC at Duke-NUS and Chairman of PAROS. “New policy interventions, such as phasing out internal combustion engine vehicles, can help to reduce the dangers.”

Prof Ong, who is also senior consultant at the Department of Emergency Medicine at Singapore General Hospital, added, “Individuals can also take simple but significant steps, such as wearing high efficiency air filtration masks during periods when the PM2.5 levels are elevated and not smoking.”