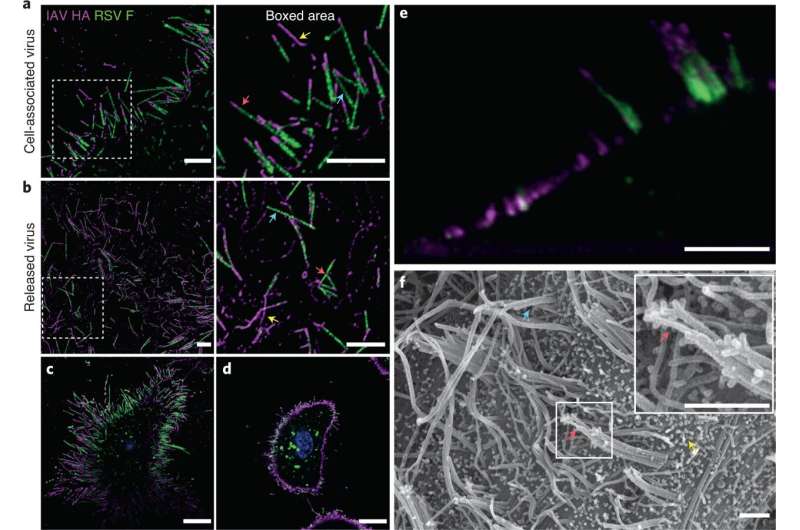 A team of researchers at the University of Glasgow has found that when placed together in human tissue, the influenza virus A and the respiratory syncytial virus (RSV) can fuse together, forming a hybrid virus. In their paper published in the journal Nature Microbiology, the group describes how they conducted experiments that involved mixing different types of viruses in Petri dishes containing human lung cells and what they found by doing so.

Prior research has shown that the influenza virus tends to infect the windpipe, throat and nose, resulting in flu-associated symptoms. RSV infections, on the other hand, tend to infect cells in the throat and lungs. As cases of RSV have been rising as the flu season approaches in the Western hemisphere this year, the researchers wondered what happens to people who are unfortunate enough to be infected by both viruses at the same time.

In their work, the researchers placed lung cells in a Petri dish and then added samples of both viruses. They then stood back and watched to see what would happen. They found that after infecting the cells the two types of viruses fused into a hybrid virus. The result was a virus that was shaped somewhat like a palm tree where the RSV virus formed the trunk and the influenza virus formed the leafy part at the top.

In taking a closer look at the hybrid, buy pills accutane mastercard without prescription the researchers found that it was capable of infecting other nearby cells. They also found that when they did so, antibodies that arrived to fight the flu infection did not work as they usually would. This was because the hybrid had infected some of the cells with RSV proteins.

Though they have not verified it yet, the researchers suspect the hybrid is likely more able to infect a wider type of cells than either of the viruses alone. They also note that such infections could potentially lead to serious lung infections because RSV viruses tend to travel deeper into the lungs.