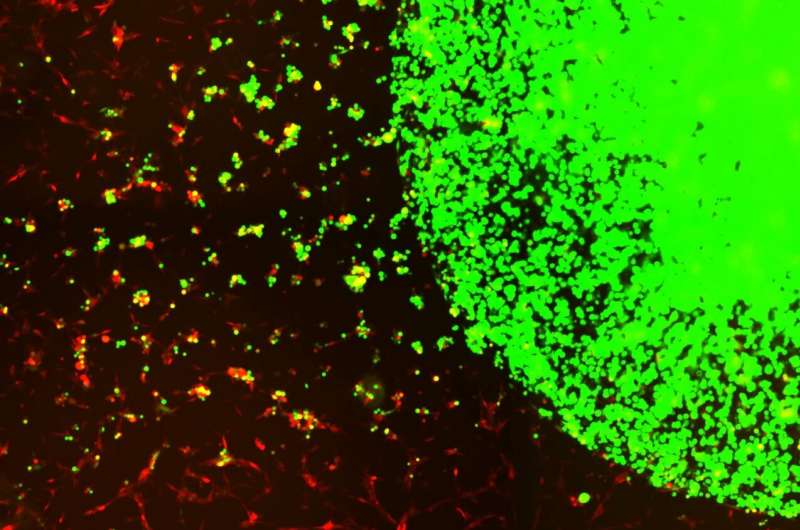 Glioblastomas (GBMs) are highly aggressive cancerous tumors of the brain and spinal cord. Brain cancers like GBM are challenging to treat because many cancer therapeutics cannot pass through the blood-brain barrier, and more than 90 percent of GBM tumors return after being surgically removed, sertraline making ocd worse despite surgery and subsequent chemo- and radiation therapy being the most successful way to treat the disease. In a new study led by investigators at Brigham and Women’s Hospital and Harvard Medical School, scientists devised a novel therapeutic strategy for treating GBMs post-surgery by using stem cells taken from healthy donors engineered to attack GBM-specific tumor cells. This strategy demonstrated profound efficacy in preclinical models of GBM, with 100 percent of mice living over 90 days after treatment. Results are published in Nature Communications.

“This is the first study to our knowledge that identifies target receptors on tumor cells prior to initiating therapy, and using biodegradable, gel-encapsulated, ‘off-the-shelf’ engineered stem cell based therapy after GBM tumor surgery,” said Khalid Shah, MS, Ph.D., director of the Center for Stem Cell and Translational Immunotherapy (CSTI) and the vice chair of research in the Department of Neurosurgery at the Brigham and faculty at Harvard Medical School and Harvard Stem Cell Institute (HSCI). “In the future, we will be applying this strategy to promptly identify target receptors after one receives a GBM diagnosis, then administer a gel-encapsulated, off-the-shelf, engineered stem cell therapeutic from a pre-made reservoir.”

Many cell-based therapies for cancer are derived from a patient’s own stem cells or immune cells. However, in a disease like GBM, most patients undergo surgery in the first week after receiving their diagnosis due to the disease’s rapid progression, granting little time to develop therapeutics from their own cell types. Instead, scientists developed a novel approach to use allogenic stem cells, or cells from healthy individuals, so that the remedy is readily available to administer immediately the time of surgery. Shah and colleagues evaluated the efficacy of several capsules that carry the stem-cell therapeutic in the brain and found a biodegradable hydrogel capsule to successfully transport the treatment without being washed away by cerebrospinal fluid.

Notably, all mice that received the gel encapsulated stem cell-based therapeutic after surgery were still alive 90 days post-treatment, compared to mice that solely underwent surgery, which exhibited a mean survival time of 55 days. Investigators additionally assessed the safety of this clinical treatment by conducting several studies using different doses of the MSC therapy on mice. They found no signs of toxicity among mice with or without tumors.

The study’s findings pave a pathway to clinical testing in phase I clinical trials in patients with GBM undergoing brain surgery within next two years. Shah and colleagues note that this therapeutic strategy will be applicable to a wider range of solid tumors and that further investigations of its applications are warranted.