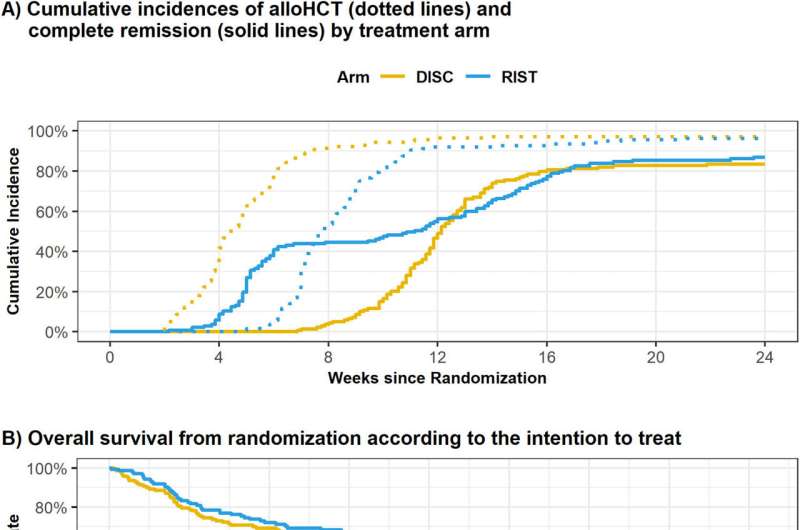 Prior to allogeneic stem cell transplantation for the treatment of acute myeloid leukemia (AML), complete remission is currently still considered the gold standard of care.

A Germany-wide clinical trial now shows for the first time that this approach does not benefit disease-free survival or overall survival. An alternative approach of sequential conditioning followed by immediate stem cell transplantation may reduce side effects and shorten hospital stays.

This important conclusion was reached in the trial led by researchers at the University Hospital Carl Gustav Carus Dresden and at the National Center for Tumor Diseases Dresden (NCT/UCC). The trial was facilitated and organized by DKMS as pharmaceutical sponsor and supported by the Study Alliance Leukemia (SAL) and the Cooperative German Transplant Study Group.

Prof. Johannes Schetelig, Head of the Stem Cell Transplantation Unit at the University Hospital Dresden and Head of the DKMS Clinical Trials Unit, presented the findings from this trial on December 11 at the world’s largest hematology congress—the 64th American Society of Hematology (ASH) Annual Meeting and Exposition—in New Orleans, Louisiana.

The research is also published in the journal Blood.

Until now, tadalafil dose giornaliera patients with acute myeloid leukemia have been treated with high-dose chemotherapy in an attempt to reduce the disease to the point where no leukemia cells are detectable (complete remission) prior to transplantation of non-patient (allogeneic) blood stem cells.

In a large-scale Germany-wide trial, a team of researchers has now been able to show that the previously targeted complete remission does not bring any significant advantage for overall survival and disease-free survival. Rather, the trial suggests that if an HLA-compatible donor is available, 12 days of preparatory chemotherapy followed by immediate transplantation yields comparable treatment outcomes with fewer side effects and shorter hospital stays.

“The results of our trial challenge an international standard of leukemia therapy and were also surprising for us,” emphasizes the trial’s Lead Prof. Johannes Schetelig. “They suggest that if a HLA-compatible stem cell donor is available, transplantation should be performed as soon as possible, even if leukemia cells are still detectable in the patient’s body. Immediate transplantation without previously seeking complete remission can reduce overall side effects and shorten hospital stays.”

“Allogeneic stem cell transplantation is the most effective treatment option for patients with refractory or relapsed AML. The previous goal of complete remission is only achievable in approximately 50% of patients, even with intensive chemotherapy. If the corresponding treatment is not successful, patients in Germany often receive further therapies with similarly unsatisfactory chances of success. Alternatively, the goal of complete remission can be disregarded and, after appropriate pre-treatment, stem cell transplantation can be offered directly,” says Lead Author Prof. Matthias Stelljes, Head of the Bone Marrow Transplantation Unit at Münster University Hospital.

Within the clinical trial, the intention-to-treat population included 276 adult AML patients who were scheduled to receive an allogeneic stem cell transplant due to a poor response to initial chemotherapy or relapse. In all patients, a donor had already been found or the donor search was well advanced. The trial participants were randomized into two groups of approximately equal size.

In group 1, an attempt was made to achieve complete remission in preparation for transplantation. Patients in group 2 underwent 12 days of preparatory therapy followed by immediate transplantation if a donor was available.

In the first group, complete remission was achieved in 46% of the patients. In 5% of those affected, a second attempt was made to achieve complete remission by means of high-dose chemotherapy; the remaining patients received preparatory therapy and stem cell transplantation without this further attempt. In group 1, the median time to transplant initiation was eight weeks. In the second group, transplantation was performed after a median of four weeks.

Leukemia-free survival one year after transplantation showed no significant differences between the two groups (69% vs. 71.5%), nor did overall survival one year and three years after trial inclusion (71.9% vs. 69.1% and 54.2% vs. 51%, respectively).

“The current trial is an impressive example of the fact that Dresden’s cancer research is now generating impetus from which patients worldwide are benefiting. Just 25 years ago, hardly anyone would have thought this possible.”