In the annals of shoulder surgery, NFL quarterback Drew Brees is an anomaly. In 2005, Brees was tackled and the rotator cuff tendon in his throwing shoulder was severely torn, a potentially career-ending injury. But after surgery and rehab, Brees returned the next season, led his team to the playoffs, and went on to win the 2010 Super Bowl.

Unfortunately, rotator cuff repairs don’t always go so well, especially among seniors, the age group most susceptible to these injuries. The failure rate of this surgery ranges from 20% in younger patients with minor tears to 94% in older patients with major tears.

Dr. Thomopoulos is the Robert E. Carroll and Jane Chace Carroll Laboratories Professor of Biomechanics in the Departments of Orthopedic Surgery and Biomedical Engineering at Columbia. His study was published Dec. 1 in Cell Stem Cell.

“The Egyptians came up with suturing to repair torn tissues. That’s fundamentally what we’re still doing today,” Thomopoulos says. “We attach the torn tendon to bone, wait for the body’s natural healing mechanisms to kick in, and hope for the best. Sometimes it works and sometimes it doesn’t.”

The reason that rotator cuff surgery fails so often has to do with a structure called the enthesis, a strong but paper-thin layer of tissue that connects tendon to bone. Once a torn tendon is grasped with sutures and anchored to the bone, the enthesis doesn’t regenerate itself.

Without a functional enthesis, the surgical repair is mechanically weaker than the original and prone to a second tear.

“I thought, why not go back to developmental biology and learn how the body builds the enthesis from scratch? Once we know that, we can apply the lessons to regenerate the enthesis after injury,” Thomopoulos says. 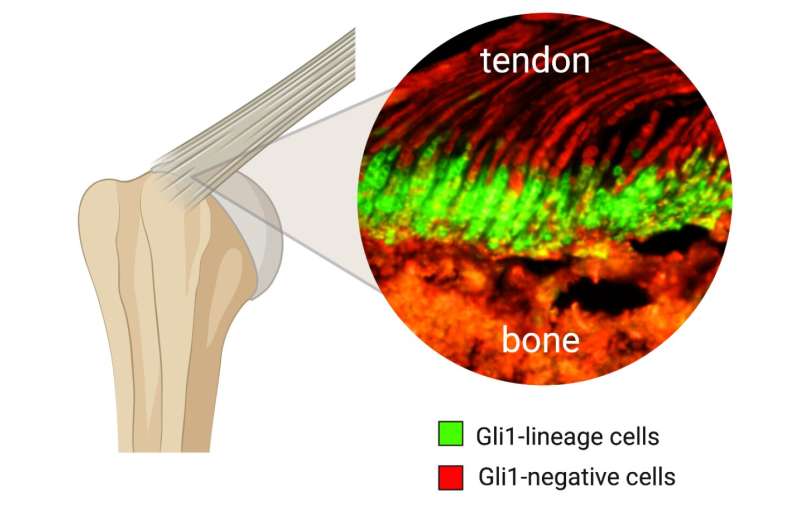 Thomopoulos had previously discovered that enthesis cells arise from a common ancestor: Gli1+ cells. In theory, adding Gli1+ cells to the repair could regenerate the enthesis after rotator cuff surgery and make the connection stronger.

In a first step toward such a therapy, Thomopoulos’s latest work shows that transplantation of Gli1+ cells into mice with rotator cuff injuries promotes enthesis healing. “So far, we have only shown this in an idealized mouse model, but it’s a promising start,” he says.

Turning Gli1+ cells into a therapy will require knowledge of the environmental conditions and molecular signals that the cells need to create all parts of the enthesis.

In the study, Thomopoulos has started to uncover those requirements, using single-cell RNA sequencing to determine how Gli1+ progenitor cells give rise to the different cells in the enthesis and the regulatory molecules that orchestrate the development of each type.

“There’s a lot more work to do before we can move to clinical trials,” Thomopoulos adds. “For instance, we’ll need to find a good source of Gli1+ cells. Older people don’t have many of these cells left, so we’ll need to find a way to generate them in the laboratory. We’ll also need to refine our delivery methods to get the cells to the right place.”

If successful, this biologic approach could also be used to strengthen other repairs that require healing of tendon to bone, including ACL reconstructions, and to prevent weakened tendons from rupturing in the first place.

“I think biologics are the future of orthopedic surgery,” Thomopoulos says, “but we still need years of basic research to fully realize the potential.”