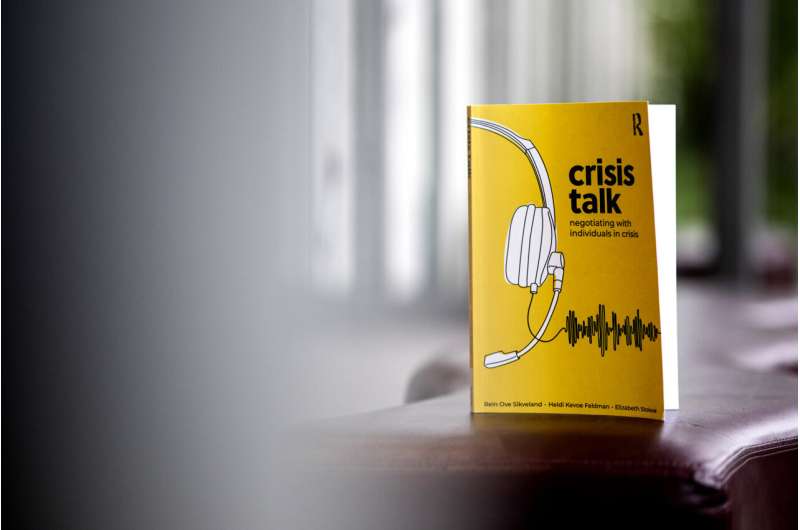 Sometimes the caller is vague: “I’m in the garage” or “I’m on the bridge.”

When calls like that come in, “You get the hair standing up on the back of your neck,” says Heidi Kevoe-Feldman, associate professor of communication studies at Northeastern University.

One of the first things that an emergency operator—or “call taker”—does when receiving a call is to ask the caller where they are. Often, callers reply with specifics: their address, a cross street, a landmark.

But when callers are vague, it often—though not always—means that the caller is suicidal.

While these are not the predominant kinds of calls call takers receive, xanax taste test they comprise some of the highest pressure situations and demand every tool in the crisis negotiator’s toolkit.

Kevoe-Feldman’s new book, “Crisis Talk: Negotiating with Individuals in Crisis,” which came out in July, sheds light on call takers and these difficult calls they take from people in crisis.

Using conversation analysis, which studies recorded, real-world conversations (like 911 calls, or calls to the new 988 Suicide and Crisis Lifeline), Kevoe-Feldman and her co-authors (Rein Ove Sikveland, assistant professor at the Norwegian University of Science and Technology, and Elizabeth Stokoe, professor at Loughborough University) create a transcript of the interaction that is more than a simple word-for-word duplicate, but a “map” of the conversation, including pauses, interjections (like “um”), the tone of speech and breathing.

“From these maps,” Kevoe-Feldman says, “we can identify specific patterns and communication practices that work well, and we can pinpoint points of miscommunication.”

These conversation maps then become training examples for other call takers.

Traditional emergency dispatch and crisis negotiation training is rooted in psychology. While that training is perfectly appropriate, Kevoe-Feldman says, the training also rarely examines these high-stakes moments in situ, and there is much to learn from real-world, difficult-to-negotiate calls.

Because conversation analysis is interested in “naturally occurring conversation,” “Crisis Talk” supplements conventional call taker training by providing examples of crisis negotiators who may have strayed from “recommended” solutions, but nevertheless helped the caller through the worst night of their life.

“Crisis Talk” wants to learn from these apparently instinctive reactions, analyze them, and help call takers apply these real-world lessons in their practice.

Through her research, Kevoe-Feldman discovered that repetitive persistence was most effective at the beginning of a conversation. Once a situation is established, “the best thing to do then is to give that caller a task, a job to do.”

Requests like “Can you go check on them?” or “Can you step down from the bridge?” help refocus a caller’s attention, toward helping either themselves or someone else in danger.

“Training tells you what to say but doesn’t explain how it works in practice,” Kevoe-Feldman says. Her goal is to “show what works, and how.”

Kevoe-Feldman, who is also trained as an emergency medical dispatcher, first got involved in emergency call analysis while studying conversations that came into the call center of an electronic camera repair facility.

After Sept. 11, 2001, the call center began receiving calls from camera users who had experienced the tragedy firsthand.

Kevoe-Feldman thinks that this experience helped predispose her to emergency call work, and now she works with the Massachusetts State Police, both studying emergency calls and providing training to dispatchers.

“Crisis Talk” will have an official book launch on Nov. 17, geared toward both crisis communication practitioners and academics. Registration information can be found here.

The cases that “Crisis Talk” handles are harrowing, and sometimes tragic, but negotiators and dispatchers work every day to help callers choose life by talking them down, Kevoe-Feldman says. “And it’s really, really hard [emotionally]. And I can’t take that pain away from those call takers.”