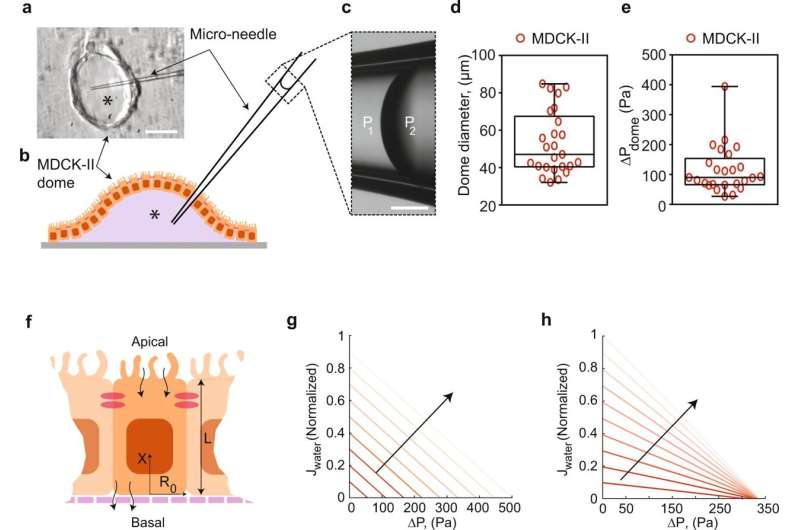 Human kidneys are an intricate network of tubes that process roughly 190 quarts of blood every day. Lining these tubes are epithelial cells that transport blood through the kidneys and circulate it back into the body. How these immobile cells generate the mechanical force needed to do their job is not fully understood. To unlock the secrets of this fluid transport process, a Johns Hopkins mechanical engineer has created a device that measures mechanical forces generated by both healthy and diseased kidney cells.

“Fundamental physical laws say that you need forces to move things. In this case, the cells are not moving, but they are moving fluid. The question then becomes how do they do this?” said Sean Sun, a professor in the Whiting School of Engineering’s Department of Mechanical Engineering and a core member of the Institute for NanoBioTechnology.

Sun and his team, which includes mechanical engineering alum Ikbal Choudhury and chemical and biomolecular master’s student Morgan Benson, recreated the kidney microenvironment using their micro-fluidic kidney pump, or MFKP. The device has two microchannels separated by kidney epithelial cells. As the cells pass fluid between the channels, it records the fluid pressure generated by the cells in real time.

The researchers noticed that kidney epithelial cells behave like mechanical fluid pumps and actively generate a fluid pressure gradient. The fluid pumping behavior is characterized by a pump performance curve, which is very much like a water pump in a house. Most people believe that kidneys behave like a conventional filter, which needs external pressure to move fluid. However, Sun and his team showed that cells can actually generate the needed pressure themselves—an insight with important implications for understanding kidney physiological function.

“Everyone hears that kidneys filter blood, but conceptually that is incorrect. What we showed is that kidney cells are pumps, not filters, and they are generating forces,” Sun said.

Their findings were published recently in Nature Communications.

Collaborating with the Baltimore PKD Research and Clinical Core Center at the University of Maryland, Sun’s team also used the device to examine mechanical behaviors of kidney epithelial cells from patients with autosomal dominant polycystic kidney disease, or ADPKD. ADPKD is a common inherited and aggressive disorder in which the kidney develops fluid-filled cysts, resulting in an enlarged kidney. The team’s device showed that ADPKD cells pump fluid in the opposite direction of healthy epithelial cells. This altered pumping behavior changes the kidney tube’s pressure profile, resulting in change to their shape and morphology.

They also tested the drug Tolvaptan on ADPKD cells using their micro-fluidic kidney pump. Tolvaptan is an FDA-approved drug that helps delay ADPKD disease progression. The team showed that ADPKD cells responded to the drug by lowering the fluid pumping flux and pressure gradients, which means the cyst should develop more slowly. This finding demonstrates that the team’s device has the potential to be used as a screening tool for new treatments for ADPKD and other kidney diseases.