Taking pain medication such as Advil and Aleve may actually worsen arthritis inflammation, according to a new study.

About a quarter of adults in the US have osteoarthritis, a condition that occurs most frequently in the hands, hips and knees. In the UK, a third of over-45s have the condition.

Non-steroidal anti-inflammatory drugs (NSAIDS) are commonly taken to help ease the pain associated with inflammation or swelling of the joint.

But a new study suggests the drugs may instead worsen inflammation in the knee over time, with experts warning recommendations surrounding their use should be revisited.

Researchers said one possible reason for their findings is that people who take pain-relief medication may be physically more active, which could lead to worsening inflammation.

Or, tylenol dosage chart by weight it could be that the anti-inflammatory effect that normally comes from NSAIDs may not work as well for the membrane lining the knee joint, they said. 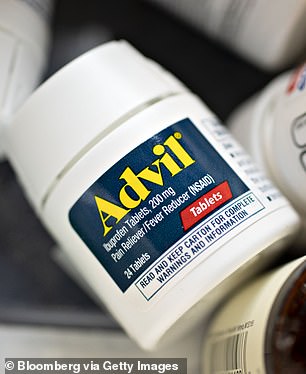 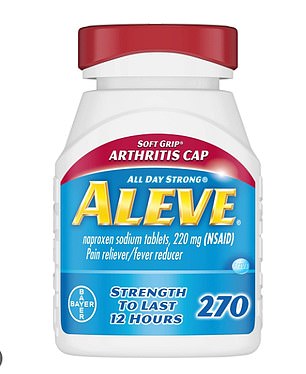 Medications such as Advil and naproxen (commonly sold under the brand name Aleve) are often taken to help ease pain associated with osteoarthritis. But a new study suggests the drugs may actually worsen inflammation over time

Osteoarthritis – sometimes called ‘wear and tear’ – is a condition that occurs when the surfaces within joints become damaged.

Cartilage covering the ends of bones gradually thin over time, and the bone thickens, according to Versus Arthritis.

Around a third of people aged 45 years and over in the UK suffer from the condition. This equates to roughly 8.75 million people. At least 20 million are known to suffer in the US.

It is different to rheumatoid arthritis, a long-term illness in which the immune system causes the body to attack itself, causing painful, swollen and stiff joints.

Replacement joints are often necessary for osteoarthritis patients, because the joint has been worn down and causes agonising pain.

A team from the University of California recruited 277 participants with moderate to severe osteoarthritis in their knee and who had taken NSAIDs for at least a year.

They also analyzed data on 793 participants who suffered from the condition but did not take the medication.

All had MRI scans of the affected knee at the start of the study and again after four years, with images analyzed for signs of inflammation.

Results revealed there appeared to be no long-term benefit of taking NSAIDs.

Joint inflammation and the quality of knee cartilage at the start of the study were worse in the participants taking NSAIDs compared to the other group, and had deteriorated more at the four-year follow-up.

Johanna Luitjens, the study’s lead author, said: ‘To date, no curative therapy has been approved to cure or reduce the progression of knee osteoarthritis.

‘NSAIDs are frequently used to treat pain, but it is still an open discussion of how NSAID use influences outcomes for osteoarthritis patients.

‘In this large group of participants, we were able to show that there were no protective mechanisms from NSAIDs in reducing inflammation or slowing down progression of osteoarthritis of the knee joint.

‘The use of NSAIDs for their anti-inflammatory function has been frequently propagated in patients with osteoarthritis in recent years and should be revisited, since a positive impact on joint inflammation could not be demonstrated.’

The study will be presented next week at the annual meeting of the Radiological Society of North America.