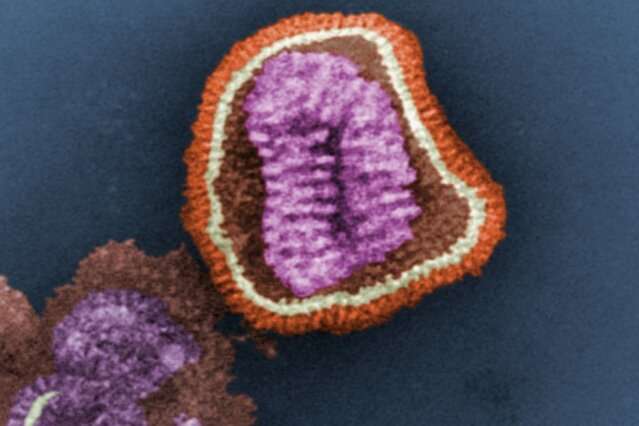 It happens every year, especially in winter. A virus saunters into your wide-open respiratory tract, worms its way into lung cells, and, next thing you know, you’re lying in bed with a fever, aches, protonix works and chills—classic symptoms of influenza, or flu.

Research led by UC Riverside bioengineers may help stop that cycle. The team has just found a way to block one strain of the influenza virus from accessing a human protein it needs to replicate in cells. The discovery could lead to highly effective ways to treat the flu and could also apply to other respiratory viruses, such as SARS-CoV-2, which causes COVID-19.

While the flu is miserable but not life-threatening for many, it nonetheless kills tens of thousands of people each year, often the youngest and oldest members of a population. The Centers for Disease Control and Prevention estimates that flu causes 12,000 to 50,000 deaths in U.S. each year. Flu vaccines, which work by teaching the body’s immune system how to recognize and attack the virus when it enters the body, are not always effective for reasons scientists don’t yet fully understand but are likely related to the complexities of the immune system and viral mutations.

The new research, published in the journal Viruses, does not rely on the immune system to stop the virus.

In order to make a person sick, the influenza virus has to infect cells in the body, where it replicates and infects more cells. Jiayu Liao, an associate professor of bioengineering at UC Riverside, previously discovered that the two most common types of flu virus, Influenza A and Influenza B, require a unique human protein to proliferate in cells and then infect more cells.

The current work has identified a way to prevent Influenza B virus replication by blocking this necessary protein. Without the protein, virus amplification is blocked completely in cells.

The Influenza B virus uses a human cellular process called SUMOylation to modify a gene called M1, which plays multiple roles in the influenza viral life cycle. SUMOylation occurs when small ubiquitin-like modifier, or SUMO, proteins attach to and detach from other proteins to change their biochemical activities and functions.

Liao’s experiments found that a SUMOylation inhibitor called STE025 can completely block Influenza B virus replication. The work was done with doctoral student Runrui Dang; Victor Rodgers, also a UCR professor of bioengineering; and Adolfo García-Sastre at the Icahn School of Medicine at Mount Sinai.