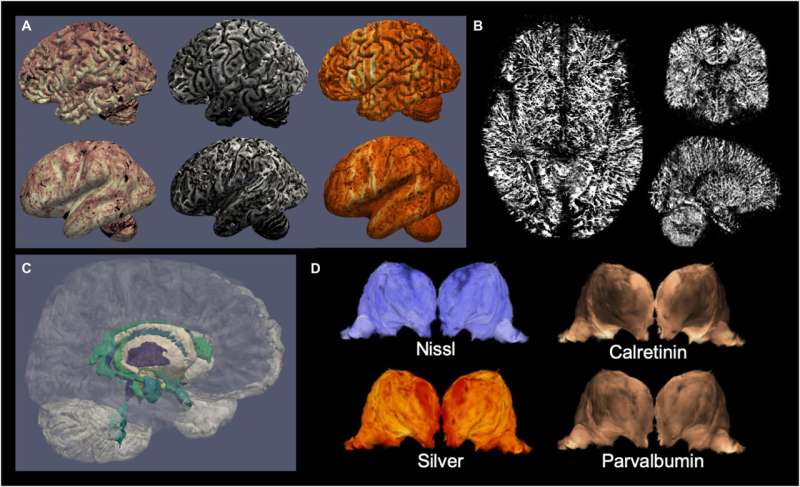 An exhaustive map of the human brain has been a long-sought goal of neuroanatomists. Noninvasive imaging techniques such as magnetic resonance imaging (MRI) allow scientists to investigate the healthy living human brain but provide only limited anatomical detail. A higher level of detail can be obtained by using microscopy on brains from deceased donors, generally focusing on small brain structures imaged in 2D. Now a team led by scientists from the UvA, have combined MRI and microscopy to produce 3D images of two entire brains with a previously unmatched level of detail. Their findings have been published in the journal Science Advances.

The UvA team worked for over five years, alongside researchers from the Max Planck Institute in Leipzig, to build a bridge between ultra-high field MRI and microscopy approaches to creating images of the brain. Two human brains donated to science were placed in the MRI scanner for 21 hours, and afterwards examined under the microscope. The MRIs were then combined with the microscopy slides, resulting in images of the brains which allow for exploration at a 200mm (0.2mm) level of detail.

Team member Anneke Alkemade: “We are excited about all the possibilities this can open up for the field. Instructors, for example, can use the datasets for neuroanatomy trainings or virtual dissections. And being able to compare MRI results with individual proteins visualized using microscopy will give researchers more insight into poorly understood MRI observations, as well as providing more anatomical detail on small brain structures.”

The researchers used an ultra-high field 7 Tesla MRI system, which has a more powerful magnet than the MRI systems routinely used in hospitals. The MRI software was programmed specifically for these studies by the researchers to accommodate the differences between living and preserved tissue. During the cutting of the tissue, each section was photographed individually, so that it could be used later to digitally correct tissue deformation in microscopy sections. Individual brain sections were placed on specially ordered glass slides, and processed with custom-built laboratory equipment.