I am the smartest person in games journalism. I have always known this, but it was nice to have it confirmed recently. As part of the review period for Big Brain Academy: Brain vs Brain, I was officially declared the biggest brain ever to attend the academy. This is my story.

As you might expect from the game’s subtitle, this Brain Academy places an emphasis on competitive play. As with any game of wits, you are always your ultimate opponent, and the typical brain training and brain tests are there, but they’re joined by a Party Mode. The original game on the DS had a Versus Mode, and the Wii Degree sequel offered a type of Party Mode, but as the series moves to the Switch, things get hands on. You now play alongside your opponent and tap the screen together, making things far more competitive, and victories all the sweeter.

Related: Animal Crossing: Isabelle Sucks, Lottie RulesHowever, this is not what proves I am the smartest person in games journalism. I’m the smartest in my house – so what? I live with one human being and one cat, it’s not exactly the halls of Mensa HQ. If I did live at Mensa HQ though, they would bow before me. I’m like a sexy Einstein, which I suppose just makes me Beth Harmon. The true test of your intelligence comes in the Ghost Rank game mode – a brand new edition to the series. 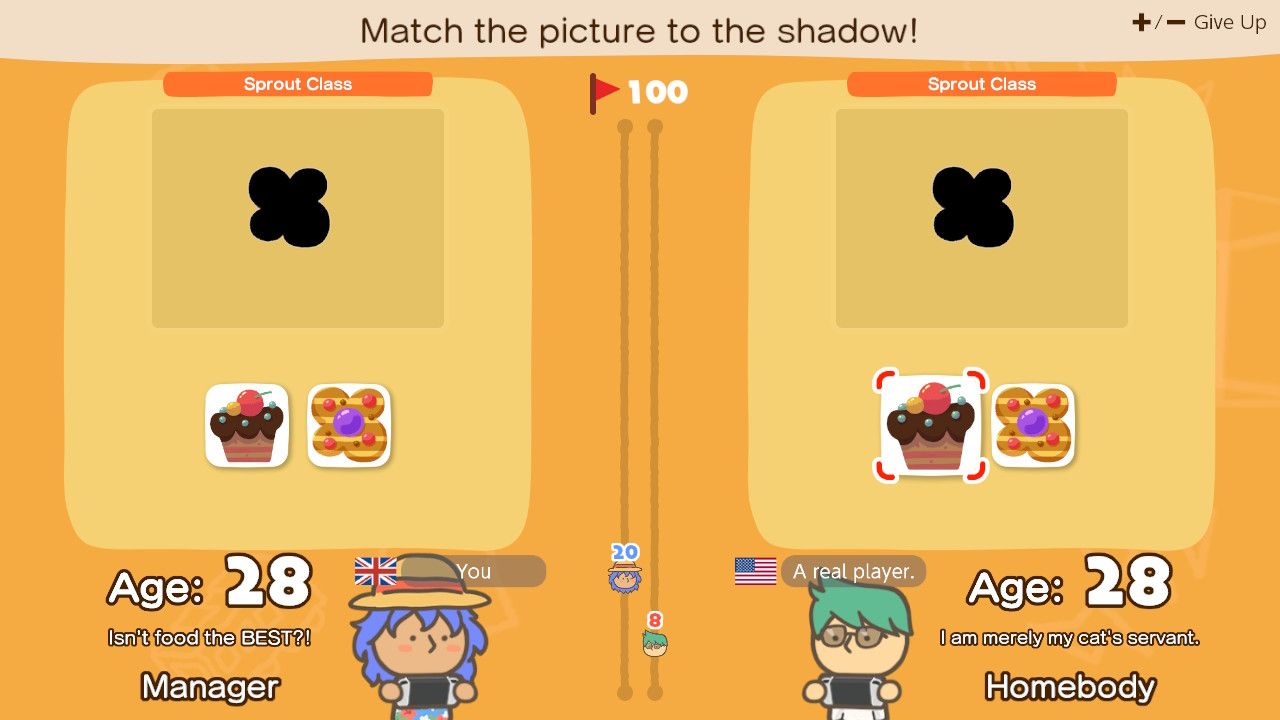 This is essentially the online game mode, although you aren’t actively playing against others in real time. Instead, as the name suggests, you’re playing their ghost. Think of it like a Mario Kart time trial, only it’s trying to remember Do – Re – Do – Fa – Mi in reverse, rather than drifting around corners. You begin this game mode unranked, and have five ghosts to do battle against – one for each of the brain categories in the game. I vanquished all five ghosts and my rank appeared: 13. I was the 13th smartest person in games journalism. I wasn’t going to take that kind of insult lying down.

There are a few caveats here to keep in mind. This was during the review period of the game, and Big Brain Academy will have a fairly low-key launch, so I know there aren’t millions of people playing the game right now. Also, while the game designates this number your Big Brain World Ranking, it isn’t especially clear if this is definitively your rank compared to others around the world, or essentially the ‘tier’ you are in. It seems 90 percent likely to be your actual rank, and since I am the smartest person in games journalism, my hunches are always correct.

[Edit: I was, indeed, correct. After writing this piece on November 26th, I checked my rank again on November 29th to see that my score remained the same, but my rank had fallen to 3rd as two reviewers overtook me. Naturally, I reclaimed my spot before the rankings reset at the end of the month]

To that end, alongside this 13th place was a score – my brain rating based on the boffins I had brilliantly bested. Beat ghosts and your score goes up, lose and it goes down. Disappointingly, a narrow victory seems to award the same bonus as an annihilation, with the points being derived from their brain rating rather than your performance. 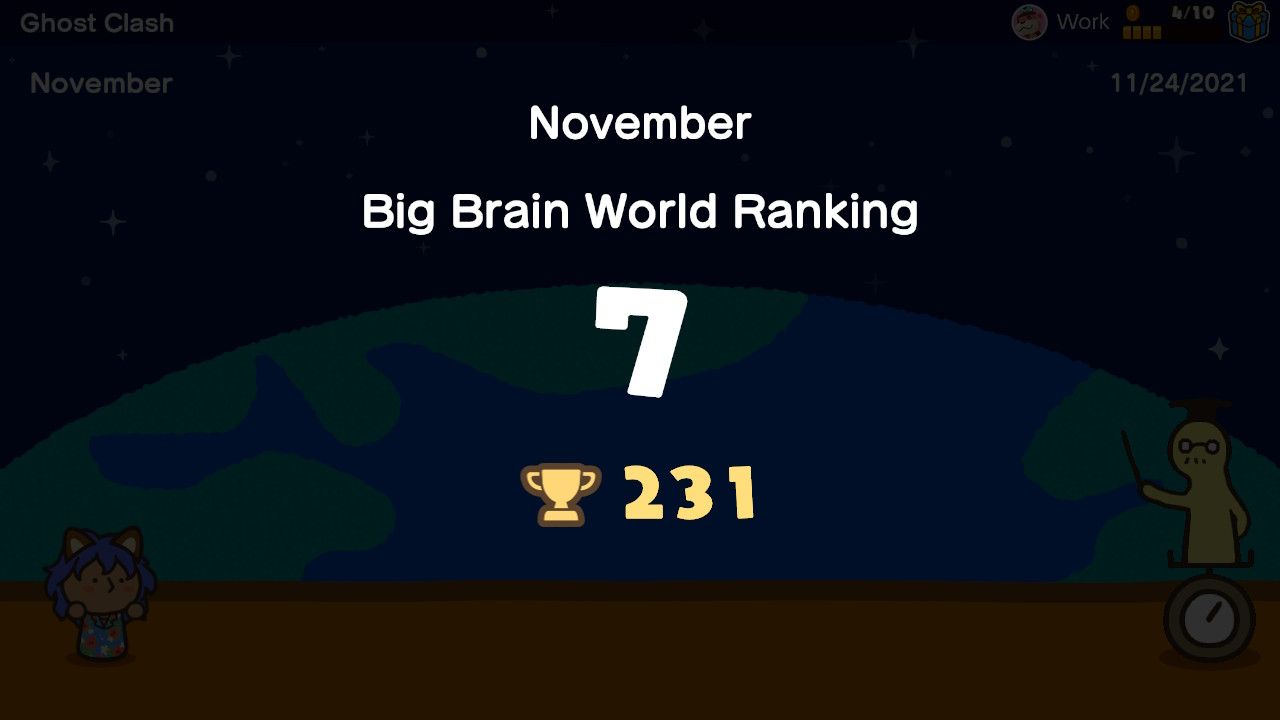 I have always thought of myself as my greatest competitor when it comes to Big Brain Academy, or really any test of intelligence. If I’m doing a quiz and I don’t know what plane was used in the 1943 Battle of Achtungberg City (this is made up, don’t Google it), I do not care. If I say that Speak Now was Taylor Swift’s fourth studio album when it was actually her third, I begin to loathe myself. It’s a thing I should know, and I did not, and therefore I failed. There was previously no winning in Big Brain Academy – there was only the brief burst of serotonin, and the endless quest for knowledge. Now it was the quest to be the smartest person in games journalism.

I beat the next round of ghosts, and the next, and the next. My rank barely moved. Four rounds of five clean sweeps each, I was up to ninth. In the early stages, I must have been competing against the really thick journos. You know that website you hate? I bet it was their reviewer.

Then it got interesting. One more clean sweep, and I was introduced to the ‘brawny brains’. These were essentially the top five current players in the world, and the gulf in class was palpable. I still won more than I lost, but clean sweeps were less common. On games I struggled with, like the infuriating ‘which direction am I looking at this stupid teddy bear at from?’, I was trounced.

Everything was more intense now. If I was Beth Harmon, these were my Borgovs. Each victory brought a pointless cosmetic that only irritated me and threw me off my game. I needed no reward but the blood of the vanquished. Speed was of the essence, and with the touchscreen effectively halved (you need to see your screen and the ghost’s screen), certain challenges became far more finicky. At one point I shouted “fuck off, I said that first you cheating bastard!” to the recording of a reviewer from Mexico who beat me in a game of ‘set the clock forward 25 minutes’ because I couldn’t press the button in time. 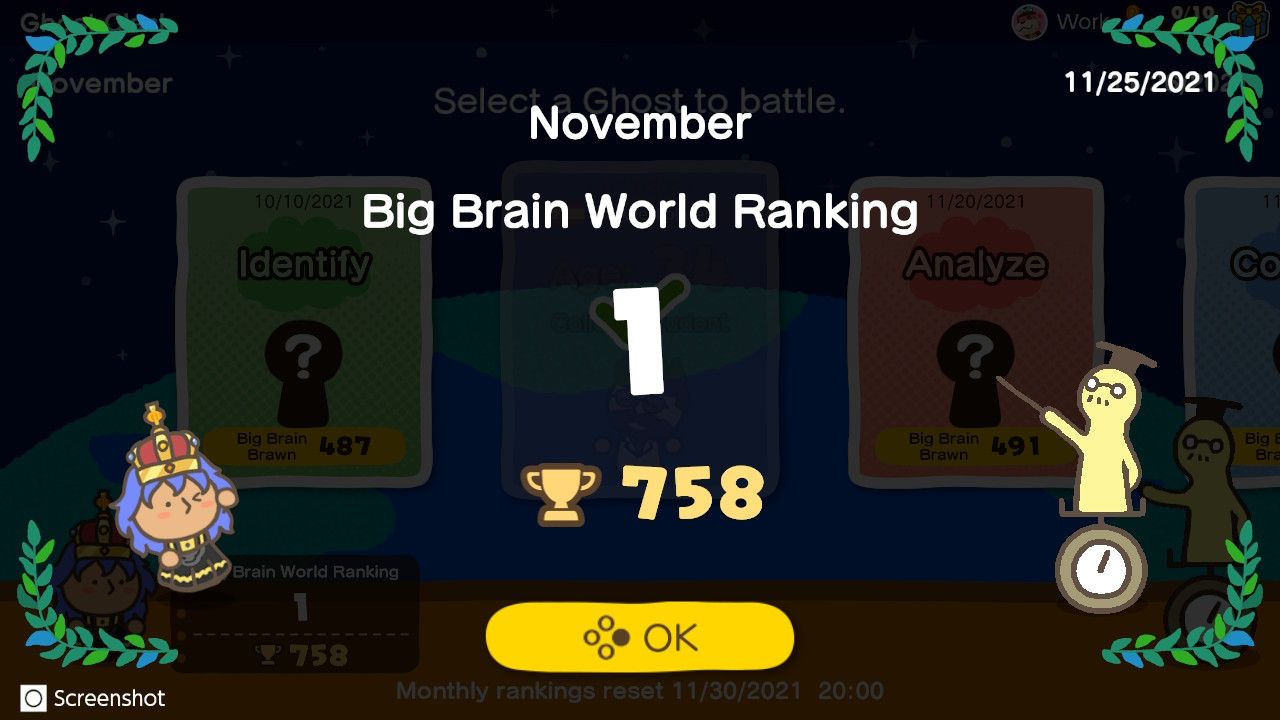 My rank climbed slowly. A clean sweep of the board saw it trickle up from five to four. Three wins, two defeats, and still fourth. Then just one loss alongside four wins, and it finally bumped up to three. Disaster struck – three losses and two wins next, so back down to four. A well timed clean sweep got me in third, and then inch by inch, maths block by maths block, bird in a cage by bird in a cage, I ascended the peak. Every time I looked up I was seeing numbers moving on the ceiling. Rank two came, and then after four rounds of 4-1 or 5-0 victories, I knew rank one was just around the corner.

The game? Train tracks. My opponent? A 34-year-old Spanish reviewer with brown hair and thick glasses. I never lose at train tracks. I looked that ghost dead in the eye and whispered “You’re in my house now, bitch.” They were dispatched with ease. Double turns send you back the same way, you buffoon! You need alternative turns to move forward! Your puny brain is no match for me.