Deep Rock Galactic didn’t always have you load into levels by burrowing down in a drill-tipped drop pod. At one point, the idea was to make the “Galactic” part of the title just as important as “Deep Rock”.

“Initially, we thought the game would be on several planets, moons, and asteroids, and you’re going from place to place,” Ghost Ship CEO Søren Lundgaard explains. “Very, very early on. But then we realised, just looking at Earth, that we have all this variety, and you can find a place that looks very alien, very foreign. And then we said, ‘Okay, why not place it on one planet and stick it to that?’ A lot of things became easier after that.”

While there’s magic in the promise of a galaxy-spanning journey, Deep Rock Galactic is, at its core, a game about feeling penned in. It’s a co-op shooter where your team ventures into intricate cave systems, delving deeper into the dark with your band of dwarves, lighting the way with flares as you go. You drill down, hop out, explore and mine, then you escape. When you’re done, you buy better gear and go again. Manually flying between planets would just get in the way of that intoxicating loot loop. 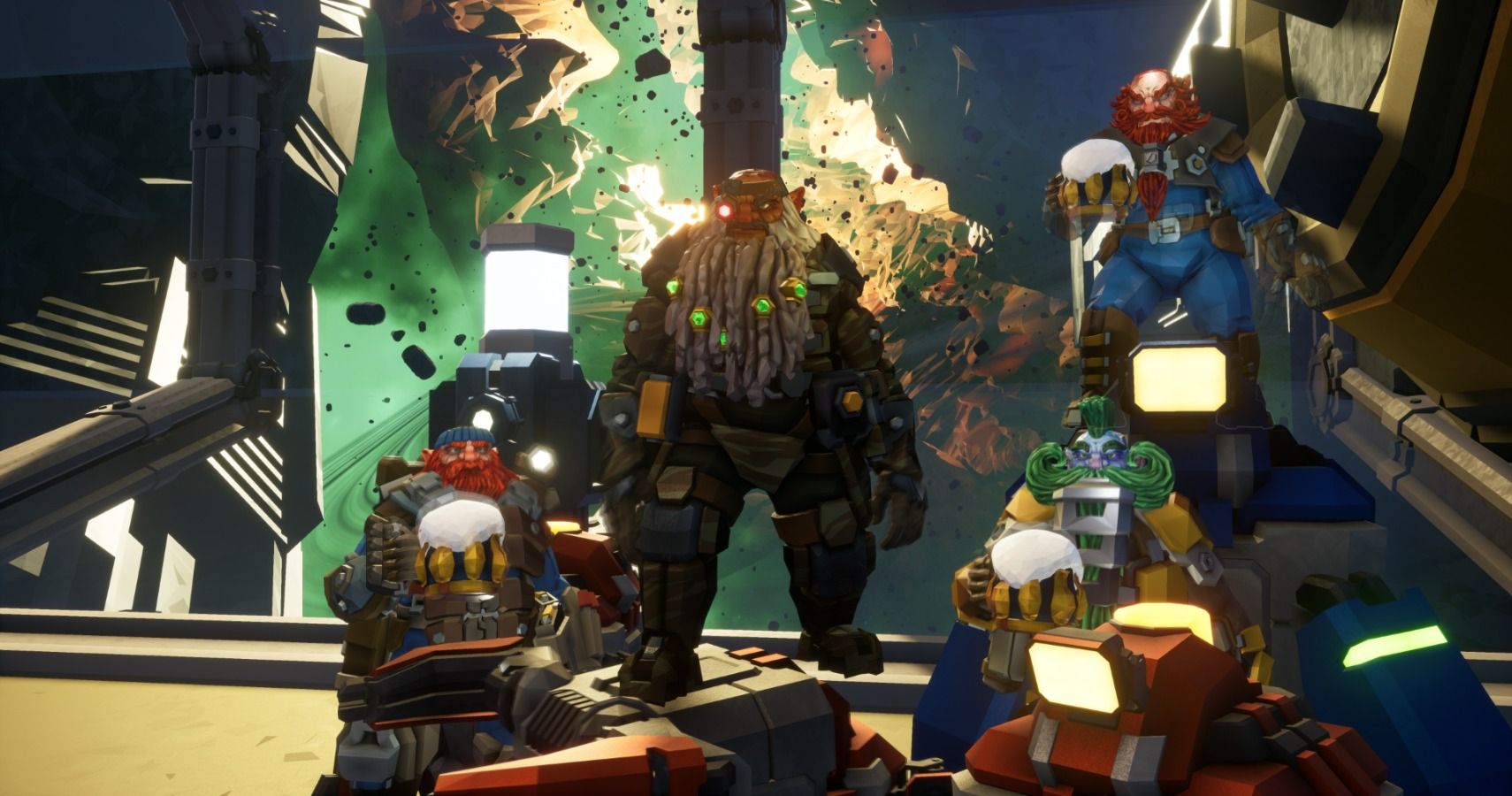 “When we introduced the idea that there was a company you worked for, it became much more clear that you should be at a digging site,” Lundgaard says.

Once the team settled on the game being on one planet, the high-level pitch started coming together. The shorthand for the game, pitched to potential partners, was Aliens via Minecraft and Left 4 Dead. You can see the Aliens inspiration in the automatic turrets the engineer dwarf places down, allowing you to recreate the iconic corridor shootout from the James Cameron sequel. Then there’s Deep Rock Galactic itself, a mining corporation that mirrors Weyland-Yutani.

“The Aliens reference was hit and miss,” Lundgaard remembers. “Especially when we started to show the game to a younger audience – we’re talking 20s – and they only knew Aliens from the newest Alien movie or not at all. And so some of that stuff was kind of lost on them. So we decided to kind of take that out of any way we communicate, but still leave in nuggets.”

Aliens’ anti-capitalist themes still exist in Deep Rock Galactic, but they’re used to enforce the mechanics of the game, rather than appearing as a simple reference. You’re a team of four under the boot of an evil corporation, giving you a common enemy whether you’re drinking a beer in the space station hub or escaping hordes of aliens beneath the planet’s surface. 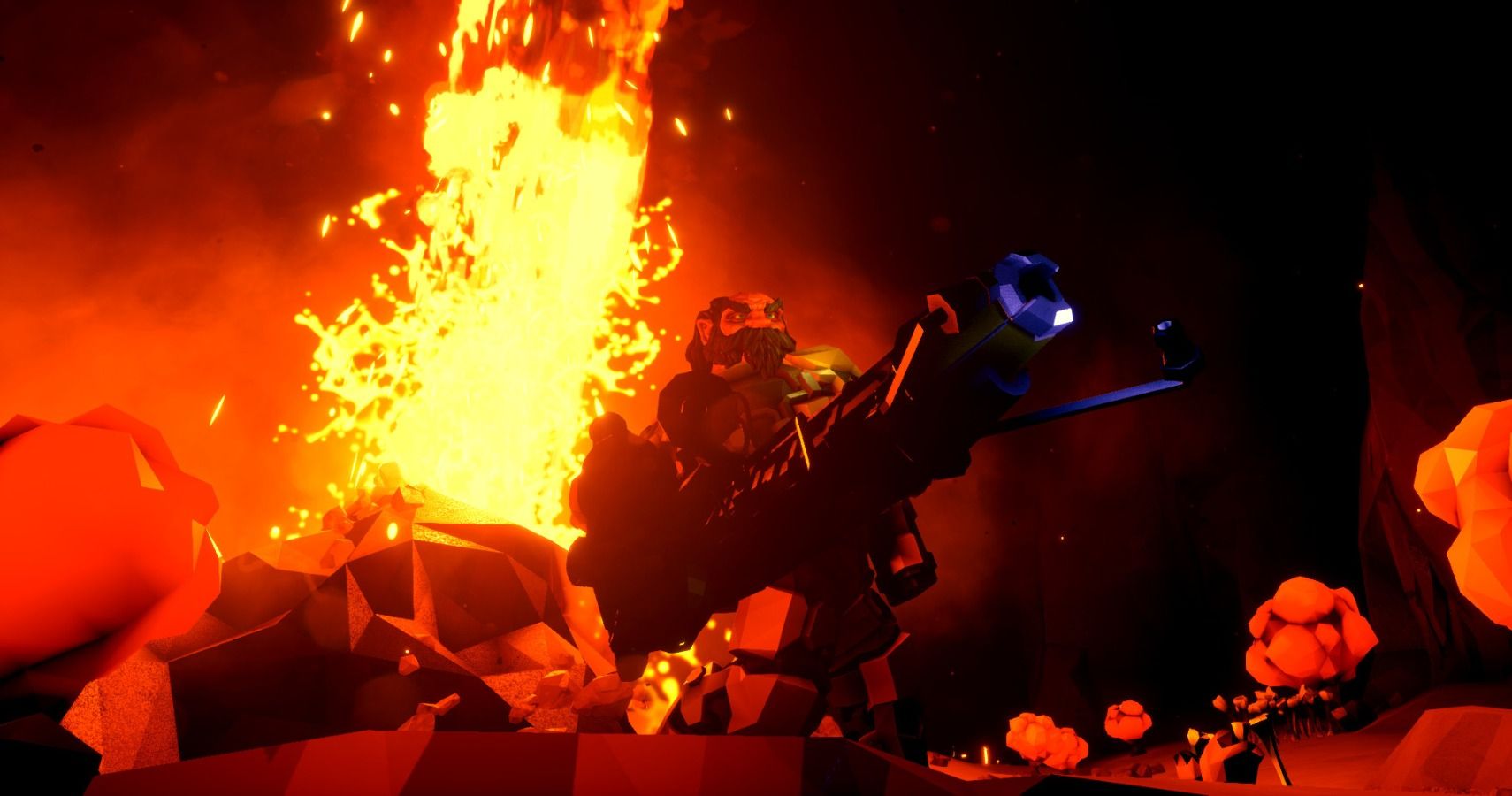 “There are lots of games where you play as superheroes or badass space marines and stuff like that,” Albert Säfström, CEO of Coffee Stain Publishing, explains. “Being a working class group of dwarves is a nice contrast to that. And it actually makes them, in some ways, even more badass. When you’re fighting these giant monsters and you hear a voice line where they complain about a pebble in their boot… management is against them, they’re going to be left behind if they don’t make it to the drop pod, there are thousands of aliens, and what they’re concerned about is the food in the cafeteria, or a pebble in their boot. It gives them a lot of character.”

These voice lines are one of the things that makes Deep Rock Galactic stand out. There isn’t really a story here, but you can still piece one together through squad banter and victory cheer. It reminds me of how Overwatch built out a universe through character interplay inside the game, eventually building that out to a universe beyond the game. Ghost Ship doesn’t have similar aspirations, however. In fact, the story players are piecing together was a bit of a happy accident, originally. With each new update, the team builds on what came before, looking at community reactions to voice lines and laying bricks on top of those foundations.

“It gives us a very interesting and clever way to tell a story without actually telling that story,” Lundgaard explains. “There’s been absolutely nothing planned about this. It’s the most improvised game project I’ve been on ever. It has been amazing. So instead of writing up a lot of stuff before we started, we just had the premise of the dwarves digging for gold and working for Deep Rock Galactic, and we took maybe a day where we just talked about what it could be. But we didn’t really write much down. And then we just evolved from there, taking in the feedback from the players to see what they enjoy, and then iterated on that and did more of those things that the players enjoyed instead of wasting our time.” 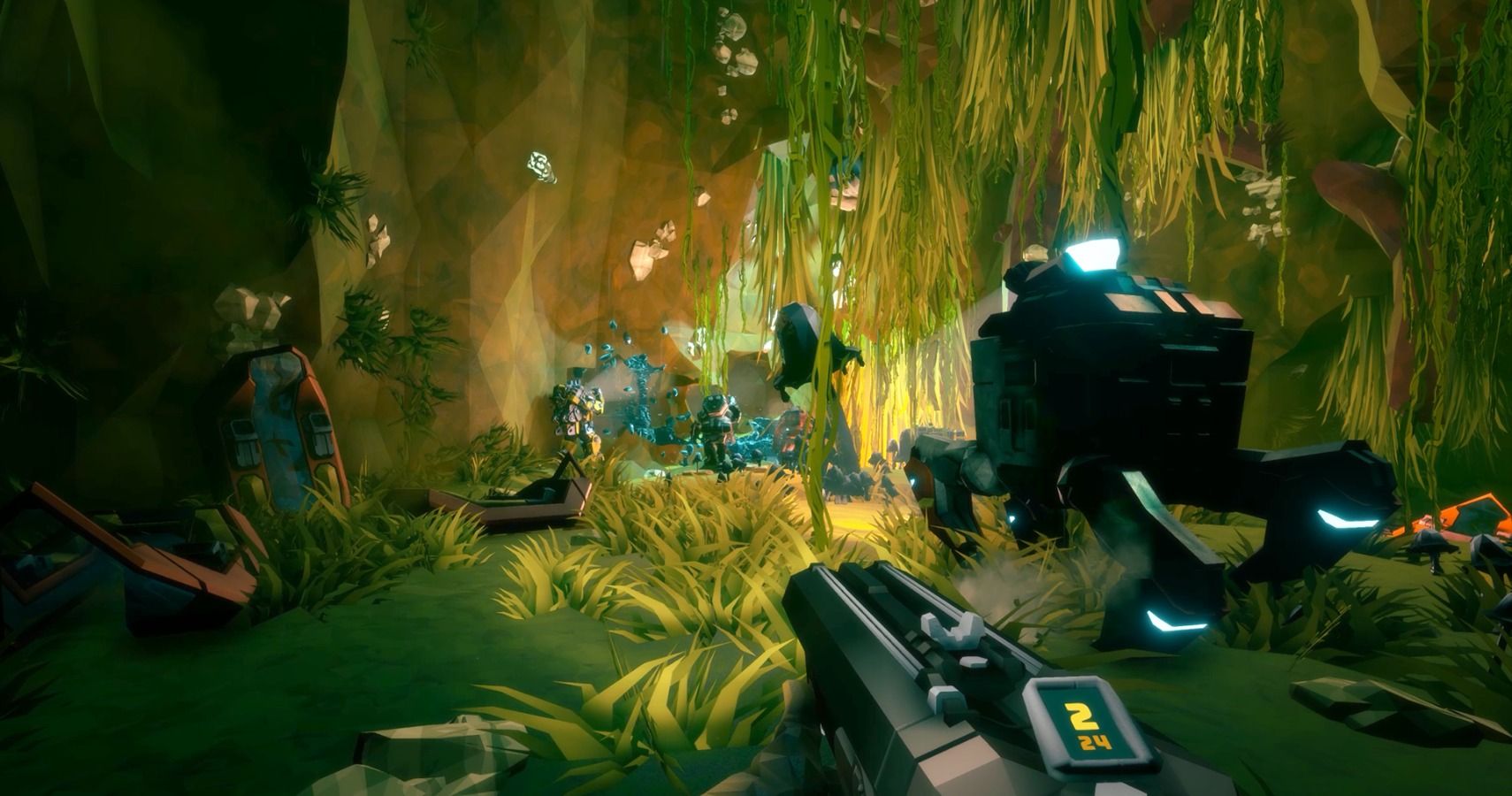 You can see this reflected in the latest update, which added a bunch of new content along with extra voice lines. One of those voice lines is directed at Molly, the dwarves’ robotic pack mule who notoriously bumbles into players and knocks them to their deaths. One new line chastises the robot for its clumsy behaviour. You can also see this approach to design in voice lines about a dwarf called Karl, which started as a rare VO line that had a 1% chance of appearing: “For Karl!” This set the community off on a hunt for lore, which has been added to the game as a response. In the Abyss Bar on the space station hub, there’s a drink you can buy called Skull Crusher Ale, and the item description hints that too much of this drink is partly to blame for Karl’s demise.

“Karl became a legend from, like, half a voice line or something,” Lundgaard laughs. “And then we have added more of that on. So we’ve added in his name and the mission randomisers, we’ve added him to some of the beers and those things were just added because the community has that thing going for Karl.”

This love for a mining legend has spread beyond the game itself, with the words “for Karl” even appearing on a whiteboard in Hitman 3, which Lundgaard thinks might be down to a former graphics artist from the Deep Rock team who left to work with IO Interactive.

Another example of this nimble design, where the developers shift focus based on feedback, resulted in another iconic line that immediately infected the community. 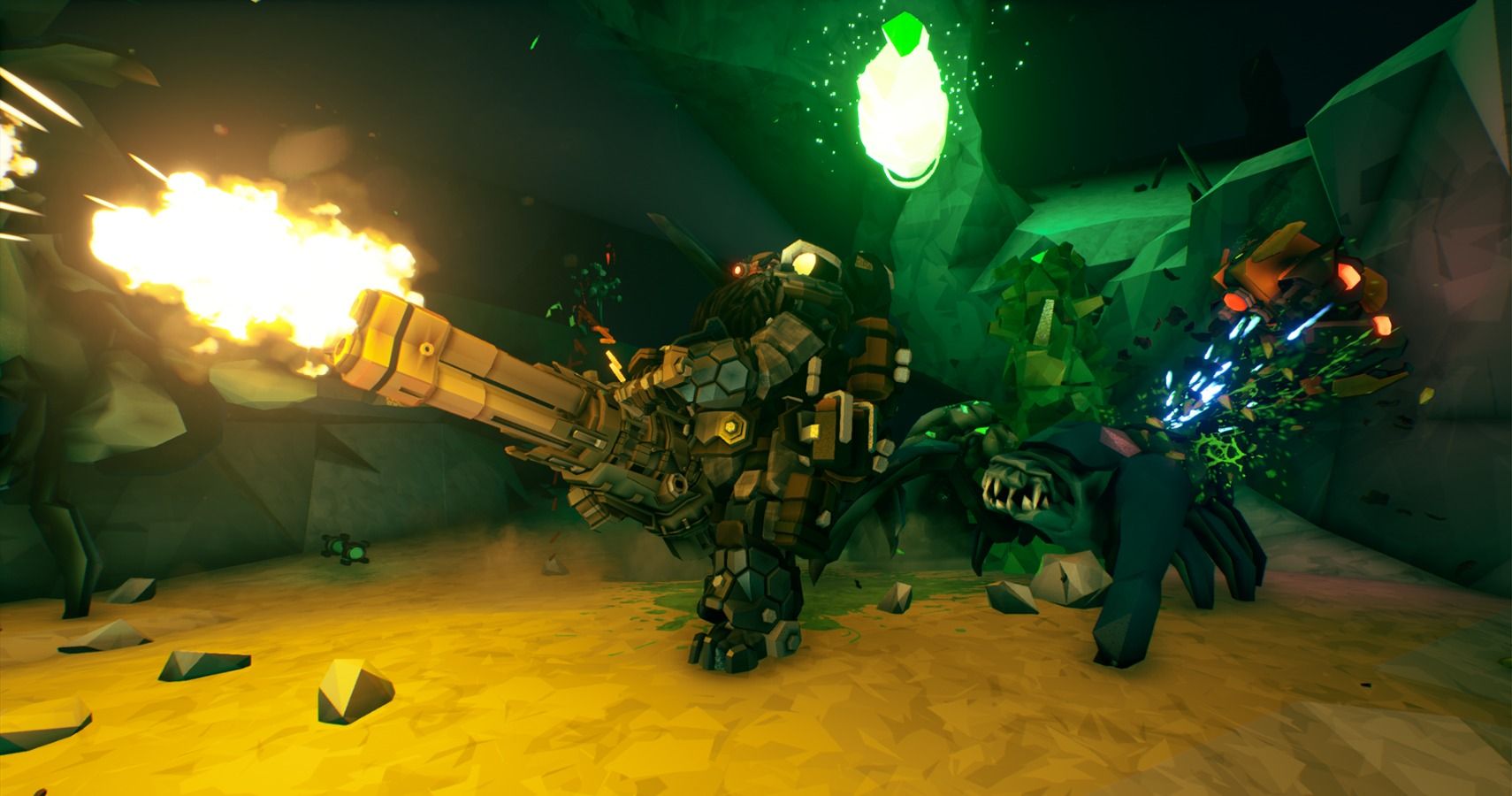 “In the very early builds of the game, the dwarves were swearing in a way that would have increased the age rating of the game,” Säfström remembers. “From the publishing side, we were like, ‘Well, couldn’t we change some of these swear words to be more dwarf specific?’. And that’s when the insult, ‘a pointy eared leaf lover’, got added.”

Pointy-eared leaf lover, “an anti-elven slur”, became the go-to community insult for anyone who didn’t look dwarven enough. “Elves are never mentioned in the game,” Säfström says. “You just have to make that connection yourself. It also works around how age ratings work, because the agencies don’t have fantasy tropes so they don’t know that the dwarves are being very rude.”

Just like the dwarves mining their way through procedurally generated caves, creating pathways where there were none before, the team at Ghost Ship is making it up as it goes along. Sure, there’s a roadmap laid out for the journey ahead, but the developers have their pickaxes at the ready in case they spot a golden vein along the way.

Next: Deep Rock Galactic Update 33 Brings New Biomes To Get Left Behind In 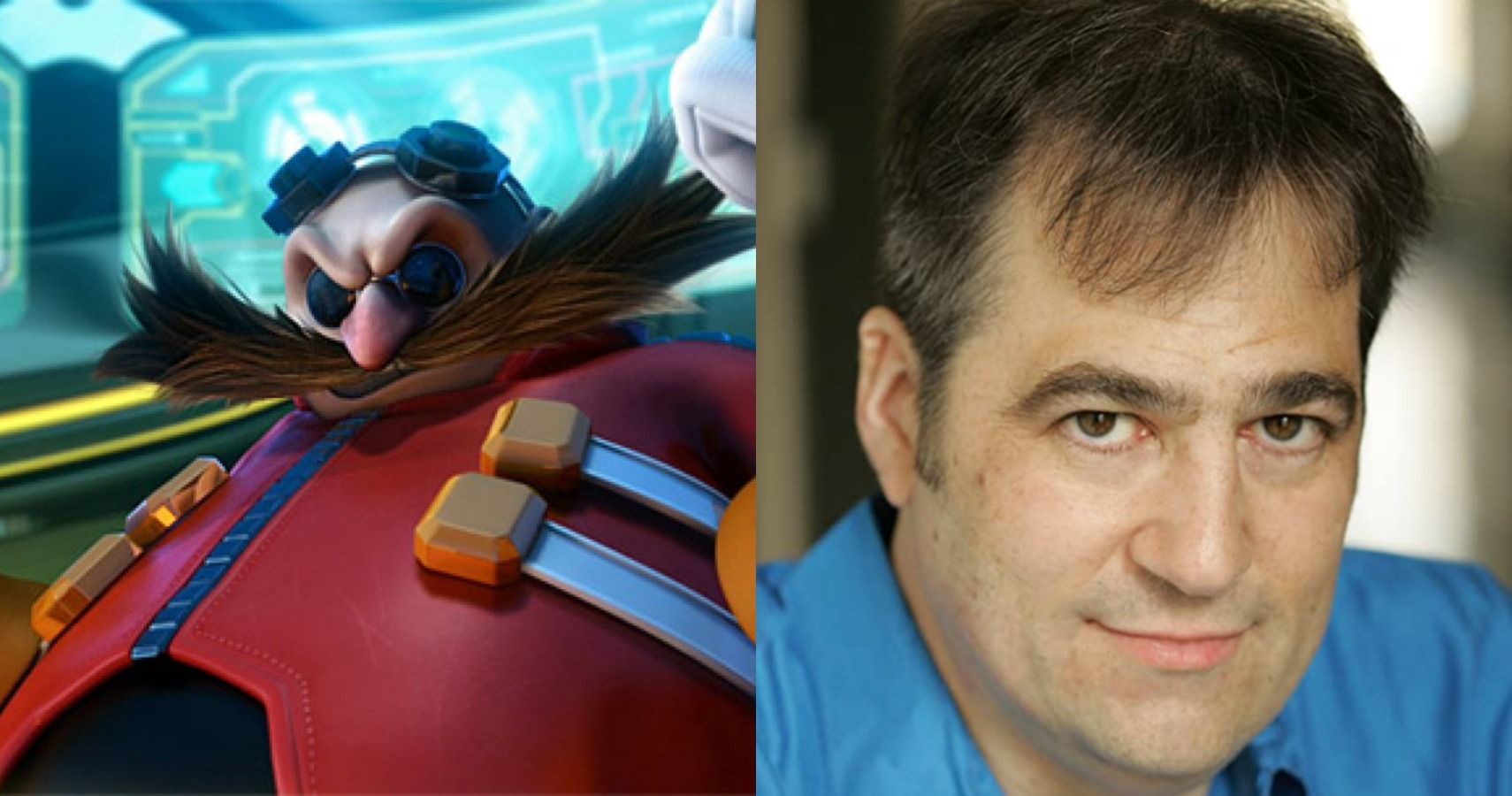