The new weapon crafting system is off to a rough start in Destiny 2, and the devs are already working on addressing some major concerns. On Twitter, game director Joe Blackburn outlined a couple of changes coming next week that will help alleviate some of the grind players are experiencing, namely, the low drop rates of Deepsight weapons and Ascendant Alloy in the Wellspring activity. This will definitely help people get past the Evidence Board quests we’ve all been stuck on, but there are bigger issues surrounding the crafting system that need to be addressed too.

In the lead up to the Witch Queen’s release, weapon crafting was described as an answer to the often frustrating RNG of weapon farming. With crafting, players would have a deterministic way to pursue the best rolls on their favorite weapons. The system was also meant to foster attachment to our arsenals because we’d be spending time leveling up and bonding with our guns, and as an added bonus, it would free up vault space by allowing us to safely delete the extra copies of guns we tend to hold onto just in case. If we take those promises point by point, however, it's clear that the crafting system as it is today is failing on all fronts.

The principle purpose of weapon crafting is to allow us to build the weapons we want, rather than grind activities until we randomly encounter them. The problem here is two-fold. First, you can’t start crafting a weapon until you’ve collected the blueprint from a certain number of Deepsight versions of that weapon. Some weapons only need to be extracted once, while others need to be extracted up to five times before you can craft one. This system merely replaces one grind for another. In some cases, grinding for five Deepsight copies of a gun is a bigger grind with more RNG than simply grinding for a god roll. Once you layer in shaping, leveling, and reshaping for your preferred perks, you can see how the grind could end up being way worse in the new system.

Enhanced traits are meant to offset this because they offer higher stats and better effects than any random world drop could ever roll with, but in practice, we find that isn’t the case. Many enhanced traits either do nothing at all or have such a marginal effect that they aren’t worth having. The Enhanced Autoloading trait decreases reload time from 2.5 seconds to 2.3 seconds. In other words, the trait improves stowed reload speed by a total of 0.2 seconds. We find similar inconsequential gains from other enhanced traits, and some – like Enhanced Grave Robber and Enhanced Golden Tricorn – that don’t do anything at all. There are quite a few weapons that are easier to farm god rolls on than they are to craft god rolls on, which defeats the entire purpose of the system. 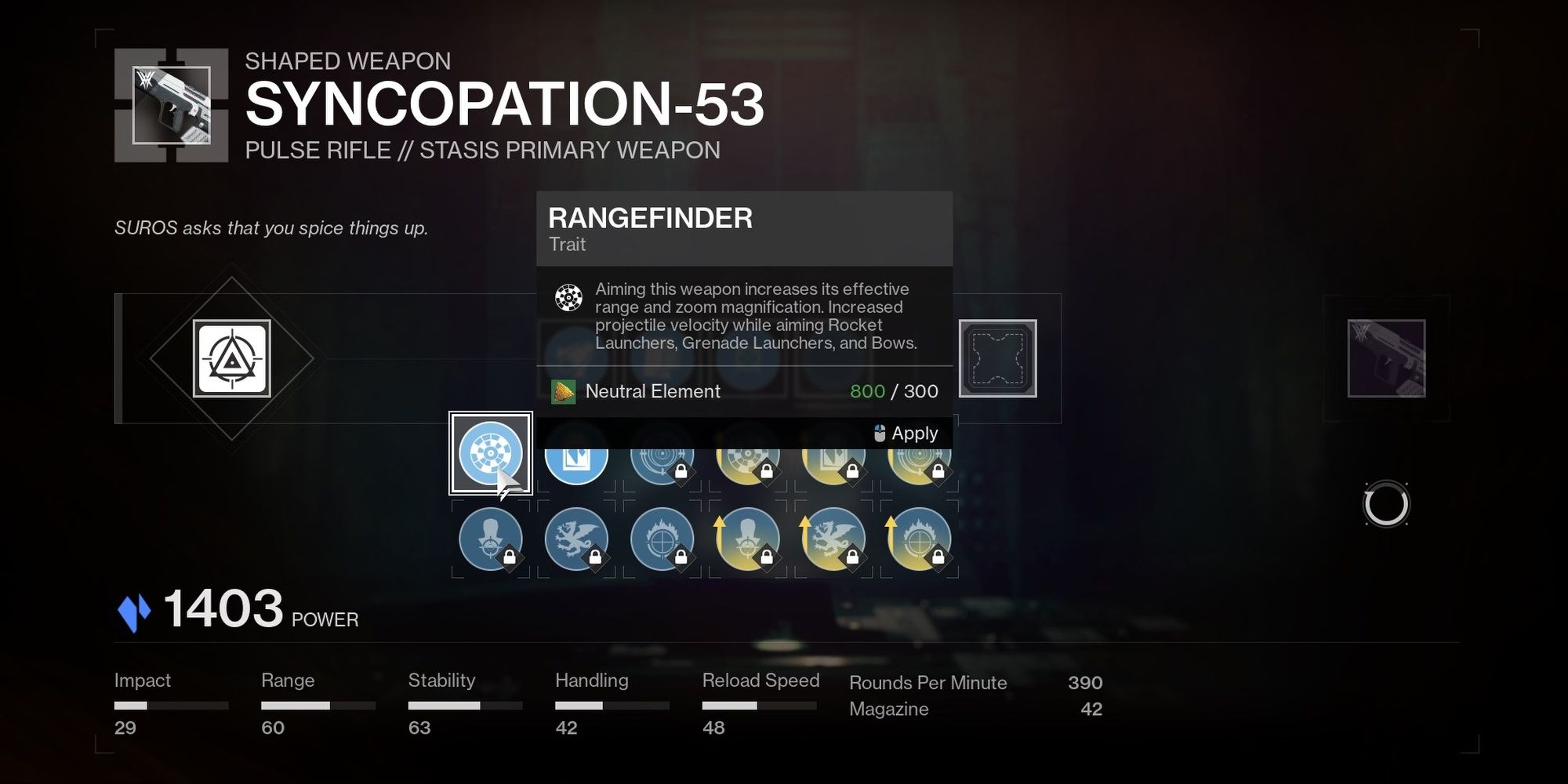 The fantasy of crafting a weapon and making it your own also suffers under the oppressive grind for Deepsight weapons. Leveling these guns and extracting their element not only provides unique blueprints, but also the materials needed for crafting. Crafting is a heinously expensive endeavor. Just upgrading a single trait to the enhanced version costs the equivalent of ten Deepsight weapons. Not only does this make experimenting with different weapon builds cost prohibitive, but it means that you’ll need to use Deepsight weapons every chance you get in order to earn the element necessary for crafting. Instead of using and leveling my crafted weapons, I find myself using every random deepsight weapon I find, unlocking the element, and then swapping to another one. As soon as I spend my element on a single trait, it's right back to grinding Deepsight weapons. Over a long enough period of time everyone will have unlocked all of the traits they want and can stop farming Deepsight guns, but it doesn’t feel good to spend all of our time using guns we don’t care about instead of the guns we’ve crafted.

Then there’s the storage issue. Thanks to low caps on element, it’s a waste to extract a Deepsight weapon until you’re ready to spend the resources from it. Players are leveling up their Deepsight weapon and storing them in the bank, causing an even bigger problem with vault space than before.

Some of these pain points will work themselves out as the season progresses and people earn the resources they need to craft the guns they care about, but it doesn’t make the system any more fun to engage with right now. The economy of crafting resources is bizarre. A basic trait costs 75 neutral element, while an enhanced trait costs 2,0000, and the limited sources of ascendant alloy – even once drop rates are improved – is far too restrictive. With prices this high, no one is ever going to try out builds, swap traits around, or experiment to find their preferred playstyle. Even the most hardcore players will dogmatically follow build guides and meta tier lists from YouTubers and community leaders and crafting will quickly become a thoughtless, zombie-like march towards homogony.

I don’t think tweaking the numbers and increasing drop rates will be enough to solve the problems facing weapon crafting right now. It has a strong foundation, at least philosophically, but the actual gameplay process of grinding for random Deepsight guns to extract their element is not going to be sustainable, particularly at the start of a new expansion cycle when there are the fewest number of unique activities. It’s good to see Bungie jumping on the most glaring issues quickly, but crafting still needs a lot more attention.