Horizon Forbidden West's relationship with Horizon Zero Dawn is an odd one. It starts off as if it might be a pretty straight-forward sequel – in the first few hours, you meet a lot of characters from Zero Dawn's final battle (good luck remembering them) and see a message from Sylens. However, this is the last time you'll see the Zero Dawn characters you're reuniting with, while Sylens appears for a single two-minute scene in the middle of the game, and then returns once the game's story is over for another fleeting scene. You even meet Erend in the first major town, but after a short mission he's sent to the hub and has minimal interactions with Aloy throughout. When all's said and done, it's not really a sequel to Zero Dawn so much as it is a new game with Aloy in it. The only thing that ties things together in a meaningful way is Rost.

This willingness to move on from Zero Dawn so readily is one of Forbidden West's biggest missteps. From a gameplay perspective, the new map is welcome and every single one of the new machines hit the mark, but the story in Zero Dawn had huge, world ending implications, and a follow-up might have been better served by exploring the smaller details, the inherent conflicts and contrasts that come with Aloy's position as an outcast, and how her exploits have changed her role within the Nora, as well as the fallout for the cities like Meridian. Instead, we pack our bags for the Forbidden West and never have to worry about that.

We're too busy saving the world to ever allow Aloy a moment to introspect her own existence, her own place in the world, either as the destined savoir or as a living, breathing human being in the here and now. The game is far too willing to forget Zero Dawn existed except for the very ending, which is used as the loose set-up to Sylens and her journey to the Forbidden West. A few characters return – the nobodies in the opening exchange, Erend, the ever-glorious Talanah, and a few other surprises – but as far as Aloy is concerned, this is an entirely new story, and that means any smaller details from Zero Dawn, any ramifications for her as person (as opposed to ramifications for the fate of the world) are ignored. 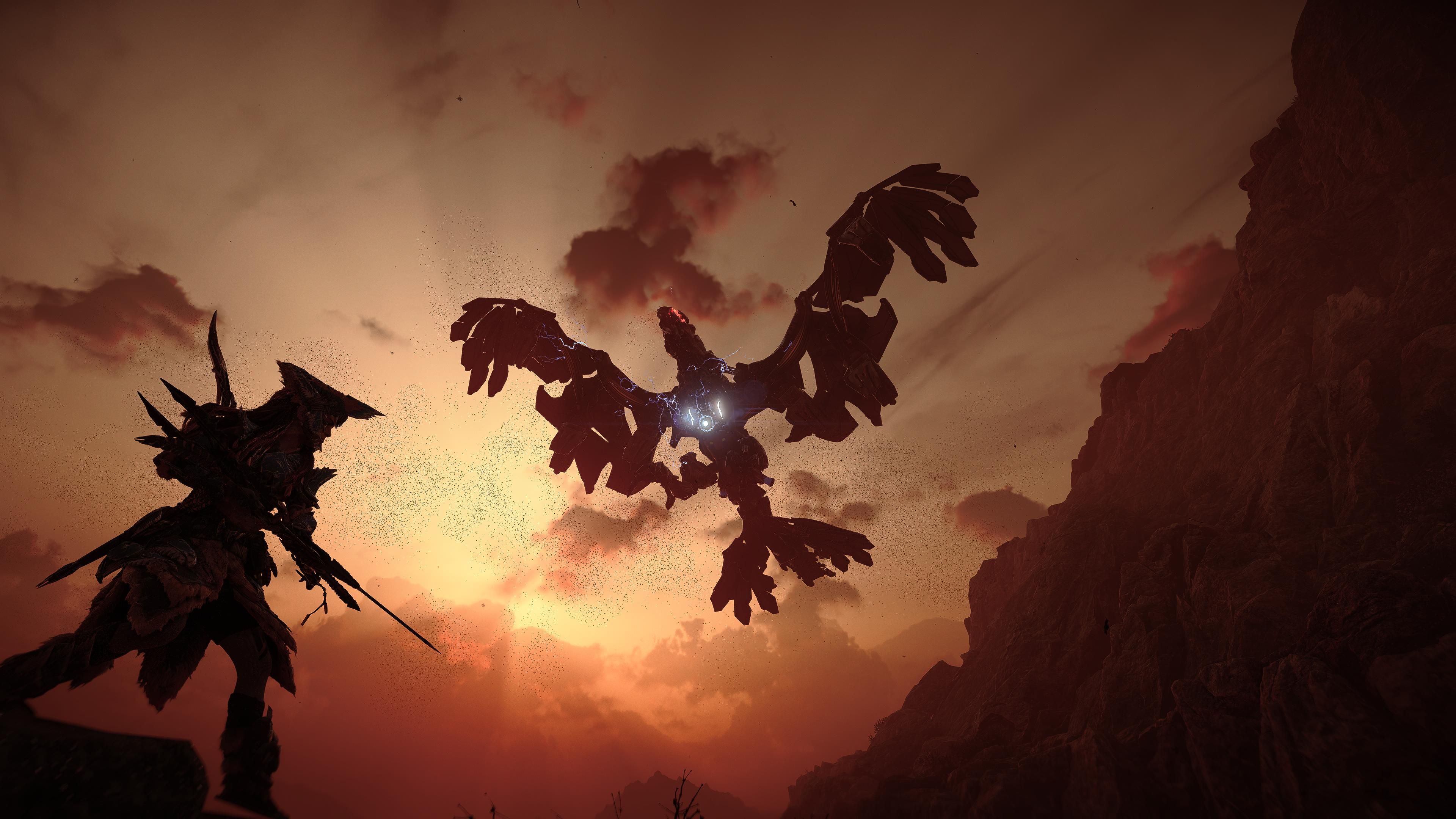 The one way this humanity shines through is via Beta, our second Aloy. She is an exact clone of Aloy, and yet is nothing like Aloy. Beta is clearly this game's ace in the hole, and the most fascinating story development, but we only get a few short scenes with her. Mostly she's there to prop up an increasingly ridiculous plot, which is extremely frustrating. In those fleeting moments though, Aloy and Beta together make a fantastic pair. It's a great philosophical examination of nature versus nurture, but it only ever digs into this dichotomy in a single moment – and that moment happens through Rost.

After waking Beta, Aloy grows increasingly frustrated with Beta's lack of courage, lack of desire to fight – lack of all the things Aloy has in spades. Beta, meanwhile, becomes fearful and self-loathing. She too sees that she is less a copy of Aloy and more a tracing paper outline. They look the same, but they are not the same. "Why can't I be like you?" she screams, and Aloy shows her a hologram of Rost. 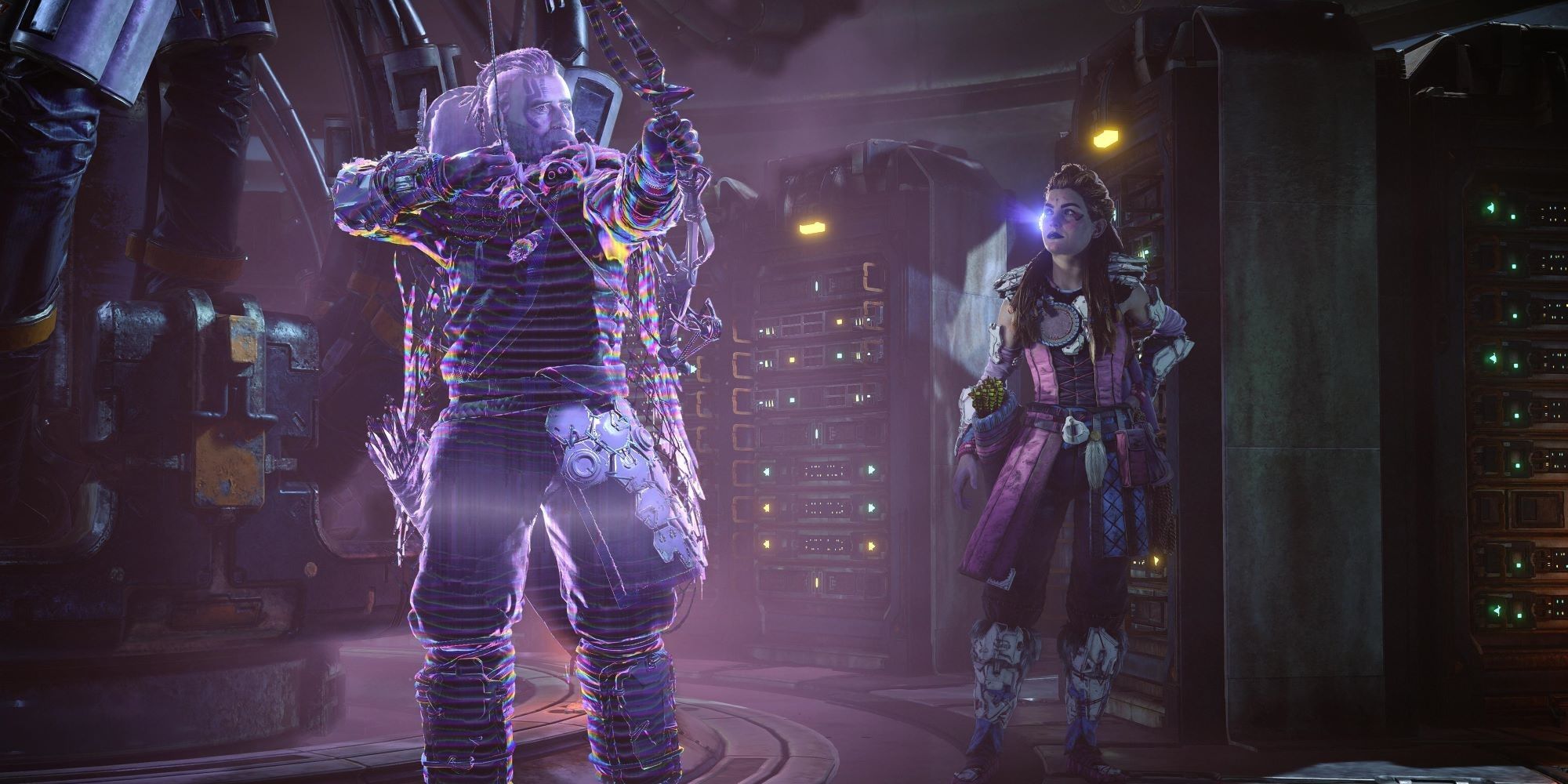 Aloy always carries this with her, like a more technologically advanced picture in a heart-shaped locket, cementing how much he means to her. Rost, Aloy tells Beta, is the difference. Beta is Aloy without Rost. He raised Aloy, taught her not just to hunt but how to define herself, how to understand what it meant to be an outcast, and how to overcome it. I'm able to deflect most of Sony's big blockbuster emotional gut-punches, but Rost's sacrifice in Zero Dawn has always stuck with me.