The world is in danger once again, and Aloy must rise to the occasion in order to put a stop to the coming threat. Sure, that’s all fine, but the most memorable part of Forbidden West is the world itself, not the dangers it faces.

Word of warning: I’ll be discussing some of the side characters and moments throughout the Las Vegas area of the game, so if you want to experience everything yourself and leave everything a surprise, come back later.

As I delved into the flooded ruins of Las Vegas, the oceanic holograms scattered throughout, it took my breath away. Good job I’d just built myself some breathing apparatus. Once I drained water and restored the lights, I thought ‘I have never seen something like this in a game before.’ I still think about that. I couldn’t stop thinking about that.

It’s not just the sights. Vegas is a two-day town, but I wanted to stay there forever. The quests and discoveries feel like so much more heart went into them than anything else. While the story will give you the main characters and the big cutscenes that move things forward, I found so much more life in the world seeing it from a hot air balloon – something you could miss entirely if you don’t spend the time with the side characters. More open world games should make the most of their side content like Forbidden West does. 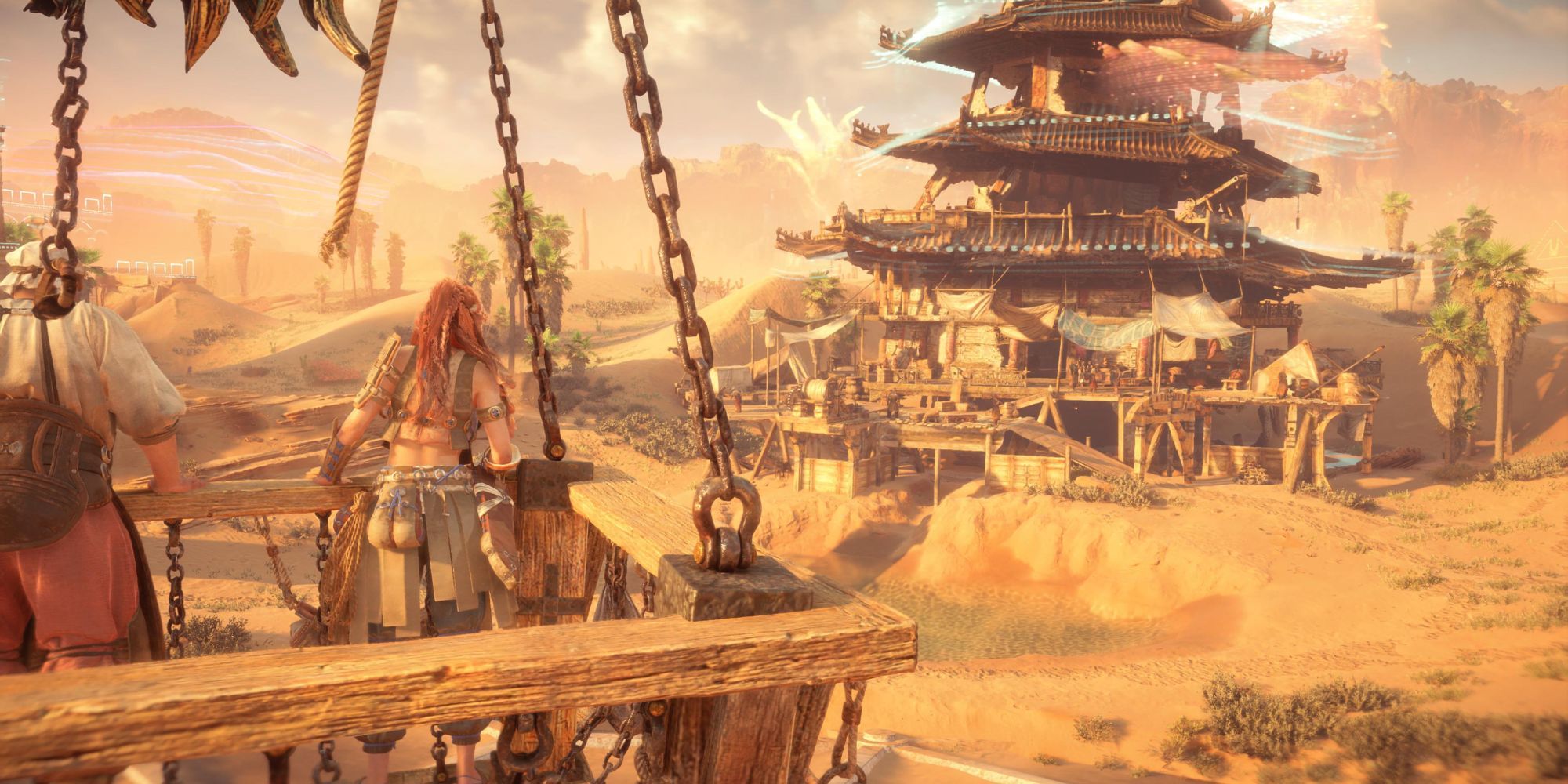 I fell in love with Morlund, Abadund, and Stemmur – the traveling theatrical trio are introduced as part of the story, but have so much more to give if you let them. Morlund will want help with a hot air balloon – or elevating orb, in Horizon’s strange nomenclature – which does not go to plan; trade with Abadund as he moans about his companions, but loves them dearly; listen to the words of Stemmur as you uncover Ornaments and wonder what the holidays of the old ones must have been like, lighting up the skies of Vegas. These moments are Horizon Forbidden West to me, not the central, planet in peril plot.

Then there’s Delah and Boomer, the sisters you meet early on in Chainscrape. Met again in Hidden Ember, Delah will want help as she thinks Boomer has run away. Track her down and help her out, and see the relationship between these two sisters deepen. It’s a moment where you get to know people, rather than just meet characters. The same goes for Porguf, out in Camp Nowhere on the skirts of the desert – his quest may not be as deep, but the way he spoke and moved with enthusiasm, I half expected him to take over as the new main character. 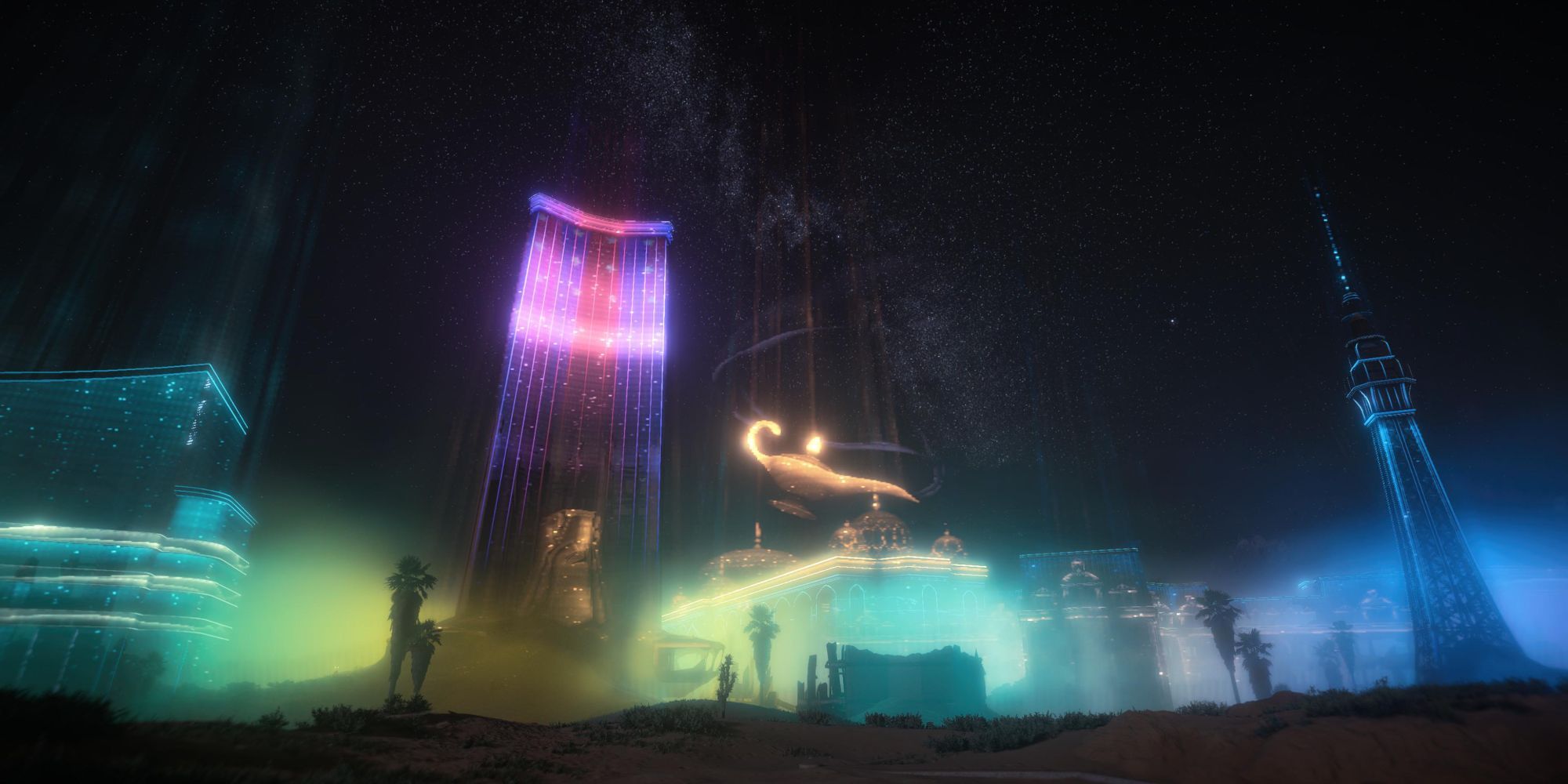 The underground Las Vegas – known as Dunehollow – is mesmerizing. Something about the cold, lonely, and decrepit ruin lying hidden under the sands. The way it illuminates a forgotten world in shadows, the sights just as inspiring to me as they were for Aloy – I would have loved to spend more time down there, just gazing. These lights burst through the sands, glowing ghosts of the buildings that stood in the Old World. Skyscrapers towered, though they stood no more. It’s a sight you won’t soon forget, and the characters in the world won’t either. Chatter and rumors of towers of lights and pictures out in the desert – could it be true?

These are the moments I hold close from my time with Horizon Forbidden West. The story is entertaining, and there are so many locations across the map that are stunning and interesting to uncover. But the deserts of Vegas, the ruins that lie underneath, and the people that make it all their new home – those are the people that make their living in this new world, and that life can be felt in everything they do.