Creating games in the pandemic isn’t easy. It doesn’t matter whether you’re an indie developer or a blockbuster studio, the act of piecing together vast, interactive pieces of entertainment is difficult enough when the world isn’t falling apart around you, so when the going gets tough, there comes a time where you need to step back and take care of yourself. For Deconstructeam, the creators of 2018’s The Red Strings Club, this harsh truth reared its head in an ugly way.

“Around August or September of last year, we broke down. We had to stop working because we were so stressed and having anxiety attacks,” says pixel artist Marina González. “It was too much, so we talked to Devolver Digital and they were the best. They said take all the time you need, don’t work and just do what you want. Now we have time to finish [Essays on Empathy] because the most important thing is ourselves and our happiness.” 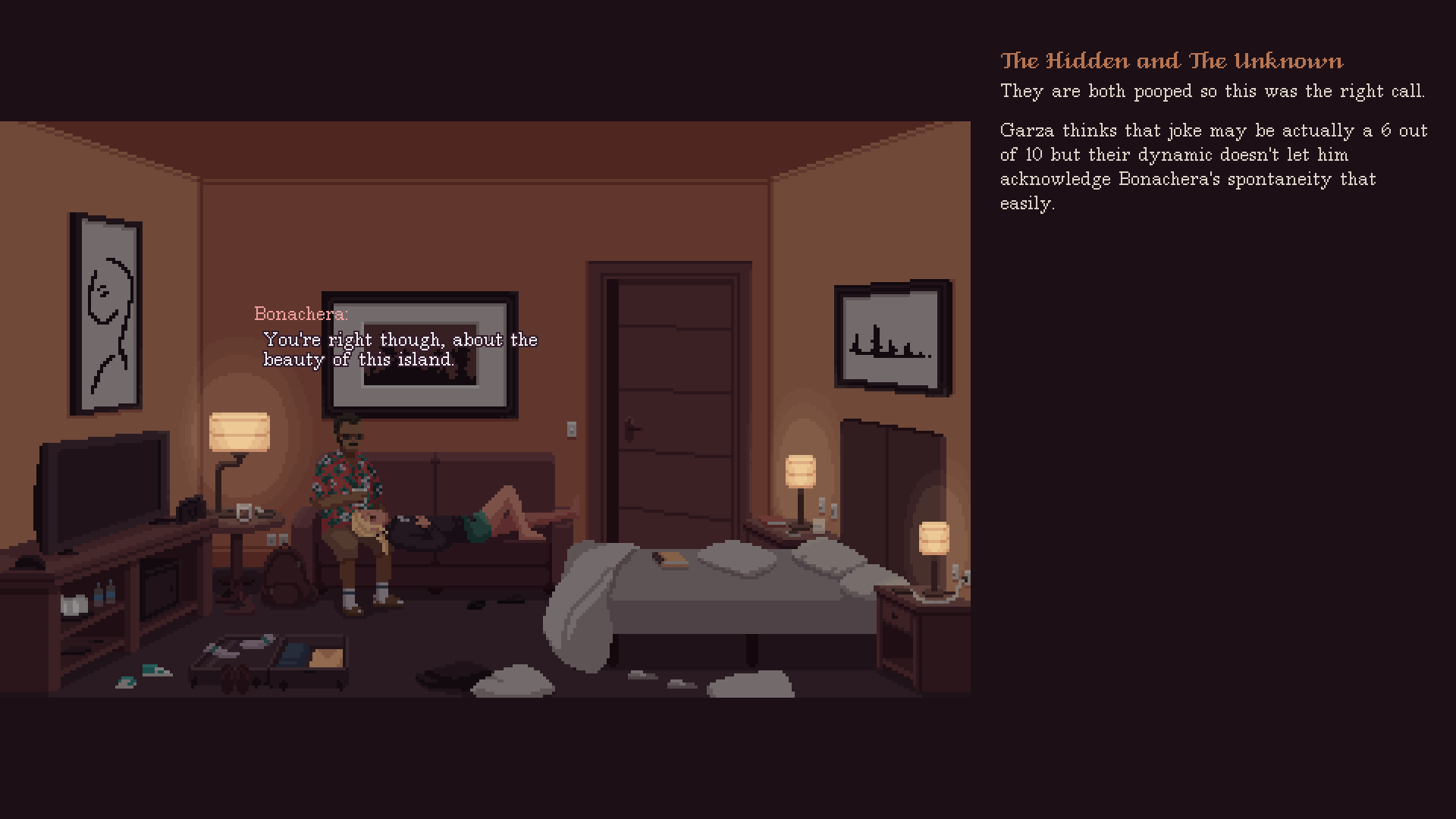 Essays on Empathy is very much a side project for Deconstructeam, a compilation of titles originally released for free on itch.io alongside some new experiences that have never seen the light of day before. The stories contained within are journeys designed to explore hope, introspection, trauma, identity and a wide range of themes that aren’t afraid to make you feel something, to breach on the uncomfortable side of the human condition. Some of the stories sound downright depressing, but they’re also designed to be inspiring.

The highlight of the package is De Tres al Cuarto, a deck building adventure that follows a duo of stand-up comedians who are trying to make a living in the comedy circuit. The content and delivery of their jokes is determined by the cards you play during each gig, but what happens before and after these performances is equally, or perhaps even more important. You will determine how this couple spends their time, whether it be going out for drinks, talking about life, or just staying in to do the nasty. It’s all up to you.

“It’s a deck building game about comedy,” Jordi de Paco tells me, who handles much of the narrative work on the project. “Your partner prepares the setup for you and with the cards you decide to build up on a joke, release a punchline, or even fail if you become too nervous. The gameplay loop is about performing at a show, and after that you go off stage and decide what to do on the island of Menorca. Do you want to go for a swim? Do you want to go to the bar? Or maybe go back to the hotel and have a nightclub or even have sex?” 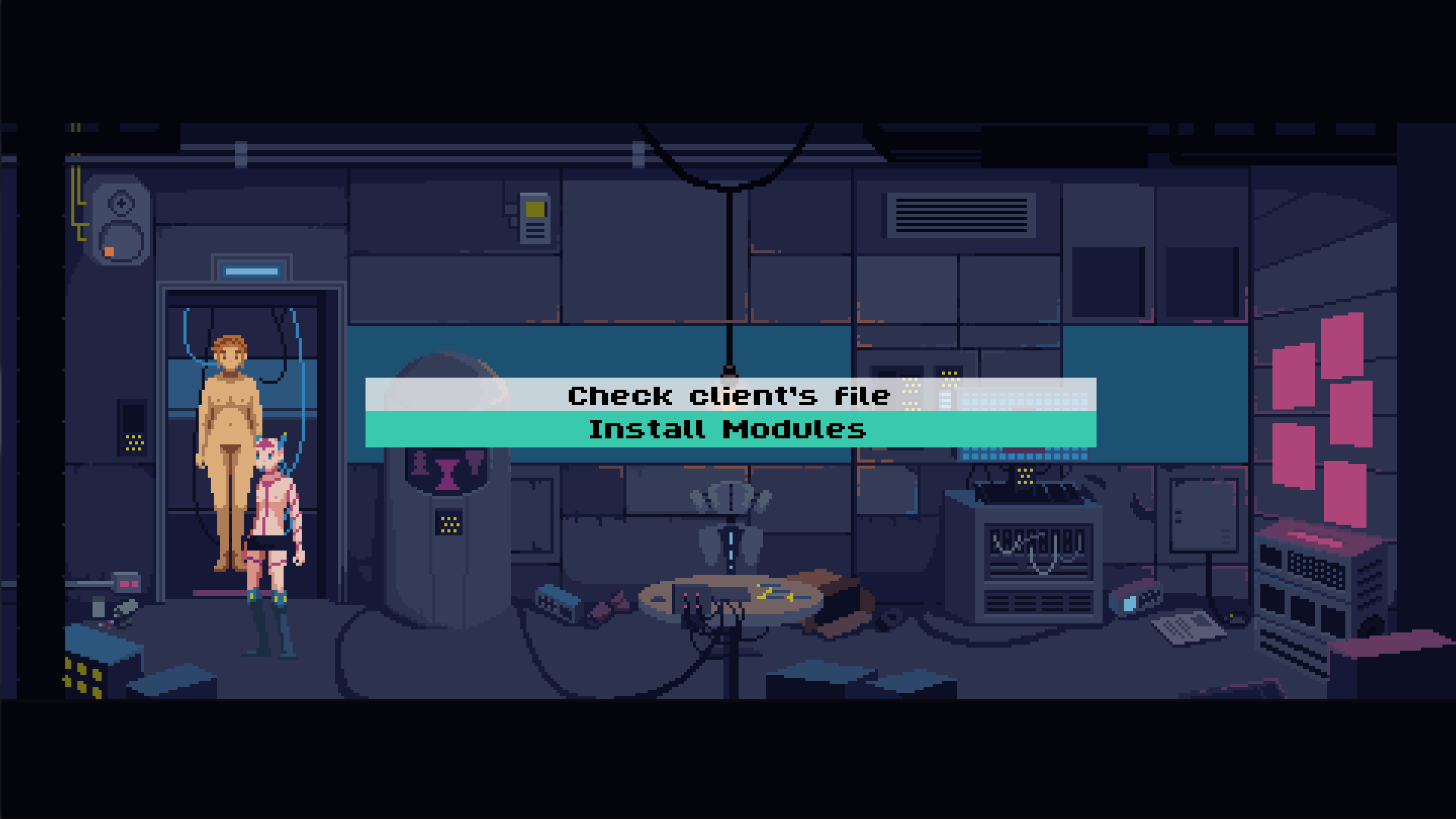 Lasting far longer than the other miniature stories in Essays on Empathy, De Tres al Cuarto is intended as an introspective peek behind the curtain, looking at how performers in the entertainment field crumble once the spotlight fades away, and how they deal with problems just like all normal people do. “It focuses on these fears and how you can rely on a partner to push through this because creating and performing is inevitably a tragic experience even if you love it,” de Paco tells me. I asked if this observation is a projection of their own status as game developers, and the public presence some have to take when promoting their creations in front of audiences that are often rather toxic. It turns out, there is indeed some correlation.

“We are not performers as game developers,” de Paco explains. “You are often working for two years on something and for a week you have the attention of the press. You need to perform like being at your best and being happy and excited. But then this week goes by and you have to deal with life again. The cycle for game developers is even tougher because it’s two years in the shadows and a week in the spotlight. I would like to share this side of development because it seems like if you don’t project success, you’re not going to sell that much. I need to create a space for developers to be more like, ‘well, this was really tough’. And I had a tough time with this, and we broke down and we work too much or whatever, without being afraid of people leaning into our failure, like, well, you are not such a great developer because you are weak.”

While it’s the longest tale to be found in Essays on Empathy, De Tres al Cuarto is simply a springboard to stories that aim to explore meaningful subject matter from a variety of perspectives. “We called it Essays on Empathy because you get to inhabit so many different characters,” de Paco says. “You jump from being a hitman hiding out in a florist to being this girl who is convinced her skeleton isn’t hers. Some of the stories talk about acceptance and dealing with the trauma of understanding your own body. The Hitman story talks about generational hate and the sacrifices that generations have to make.” 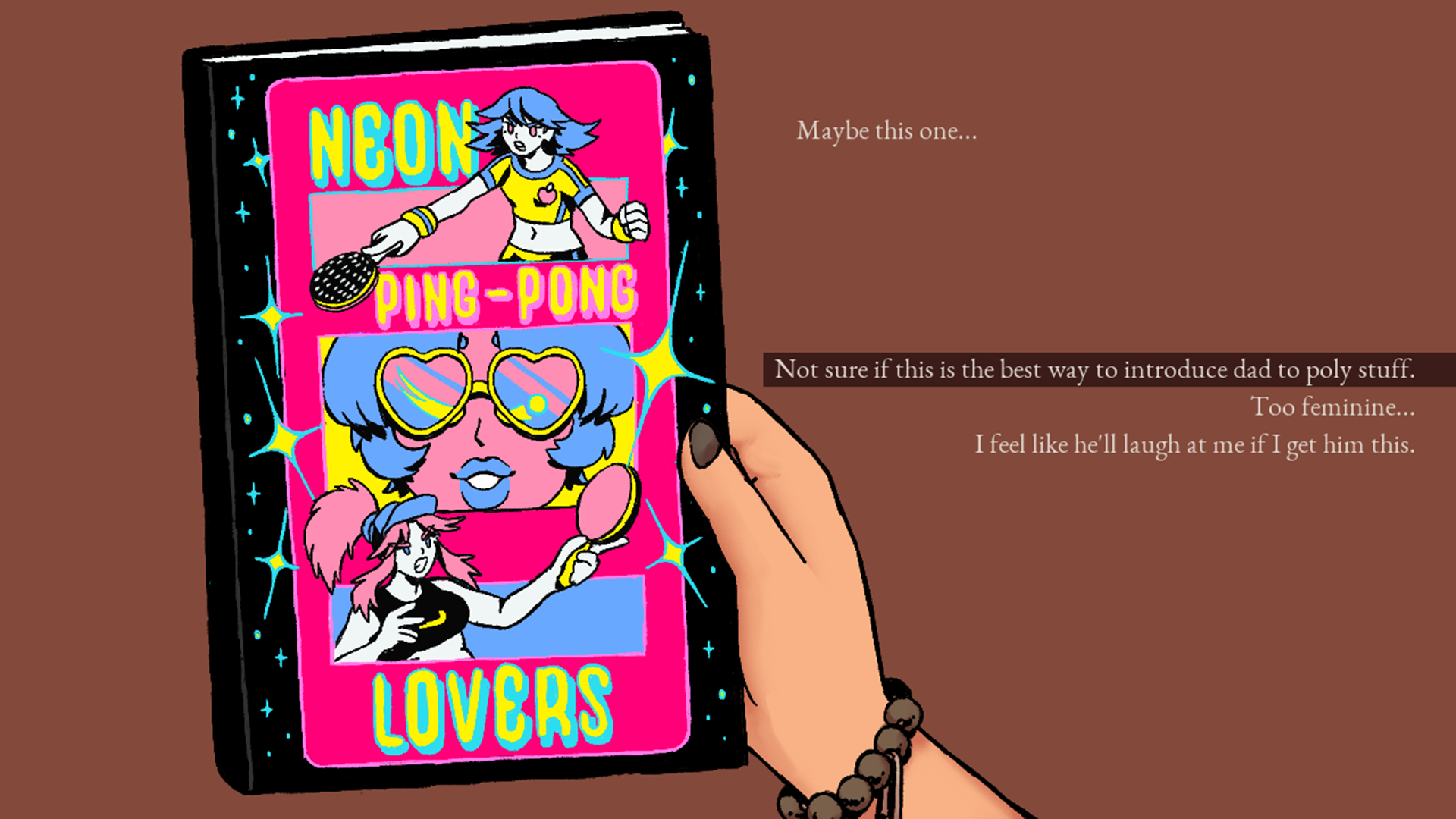 Some of the storytelling in Essays on Empathy is designed to challenge, so much so that Deconstructeam believes it goes against the traditional belief of games needing to be fun. “When we talk about games not being fun, per se, but they do need to stimulate or provide something interesting to delve into,” de Paco tells me. “Any kind of media, like books and literature or whatever can pose questions, but it is only video games that force you to answer them or to act on them. So I think that’s the powerful part of our medium and it doesn’t need to be fun. By the classic definition of the word, they need to be stimulating. They need to make you feel something and think about stuff.”

It’s a sentiment I can’t help but admire, even though I’m personally in two minds about it. Some of my favourite games in recent years are ones that spark discussion, those that aren’t afraid to push the medium forward by championing representation and breaching fascinating topics that games really haven’t explored before. This matters, and Essays On Empathy wishes to lead the charge: “It’s not really fun to play,” González tells me about a specific story which focuses on domestic violence and toxic relationships. “I think it’s not really fun to play, for me, it’s really dramatic. But I recommend it a lot because of that, because I think not all games need to be fun to play or enjoyable.” There are brighter sparks across the compilation, and not all of these micro-narratives deal with ample trauma, but the team behind it wants such things to be focused on, since in the end, it is important. 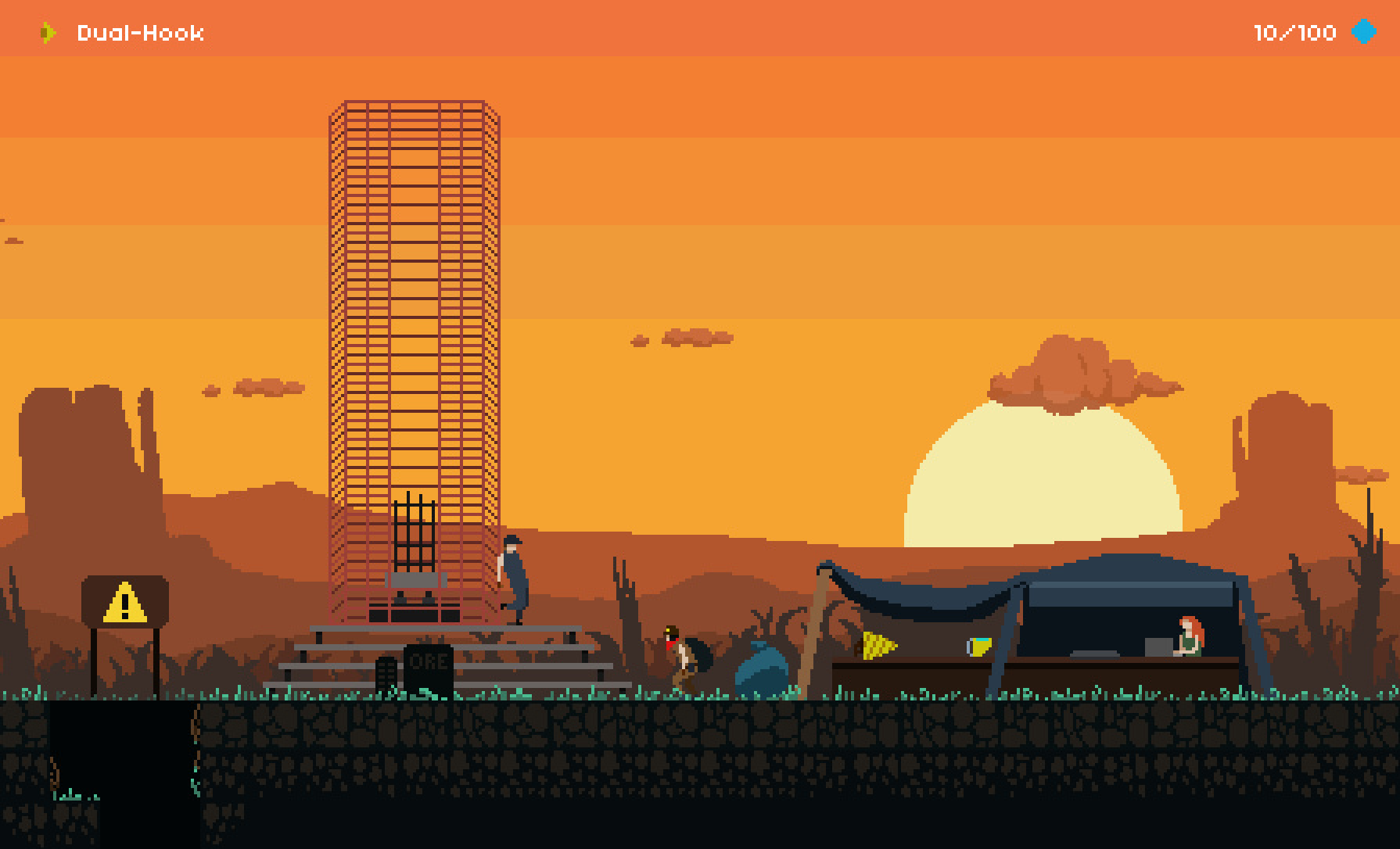 A second major project is on the horizon from the studio, and fans can expect that next year, but Essays on Empathy is seen by Deconstructeam as a “therapy game,” a project which can help define their creative achievements after a year fighting against the pandemic. “I recommend all developers out there that once in a decade, they do a therapy game,” de Paco tells me with a laugh. “We’ve been working for two years on something really big which is still like one year away from release. But we couldn’t deal with it anymore. Because we literally broke down and were unable to even sit in front of the computer without having cramps and stuff. We all went to therapy, the three of us, and in 2021, we wanted to go back to making games. But it is really scary to go back to the project that destroyed us.”

So Essays on Empathy became an experimental release and a homage to the studio’s work thus far, with the full product set to include a documentary which delves into the creative philosophy behind many of its individual stories. I can see the fire in their eyes as our chat comes to a close, and after months of hardship, these developers have found their spark once again.

Essays on Empathy is coming to PC on May 18th.

Next: John Cena Needs To Turn Good In Fast And Furious 9 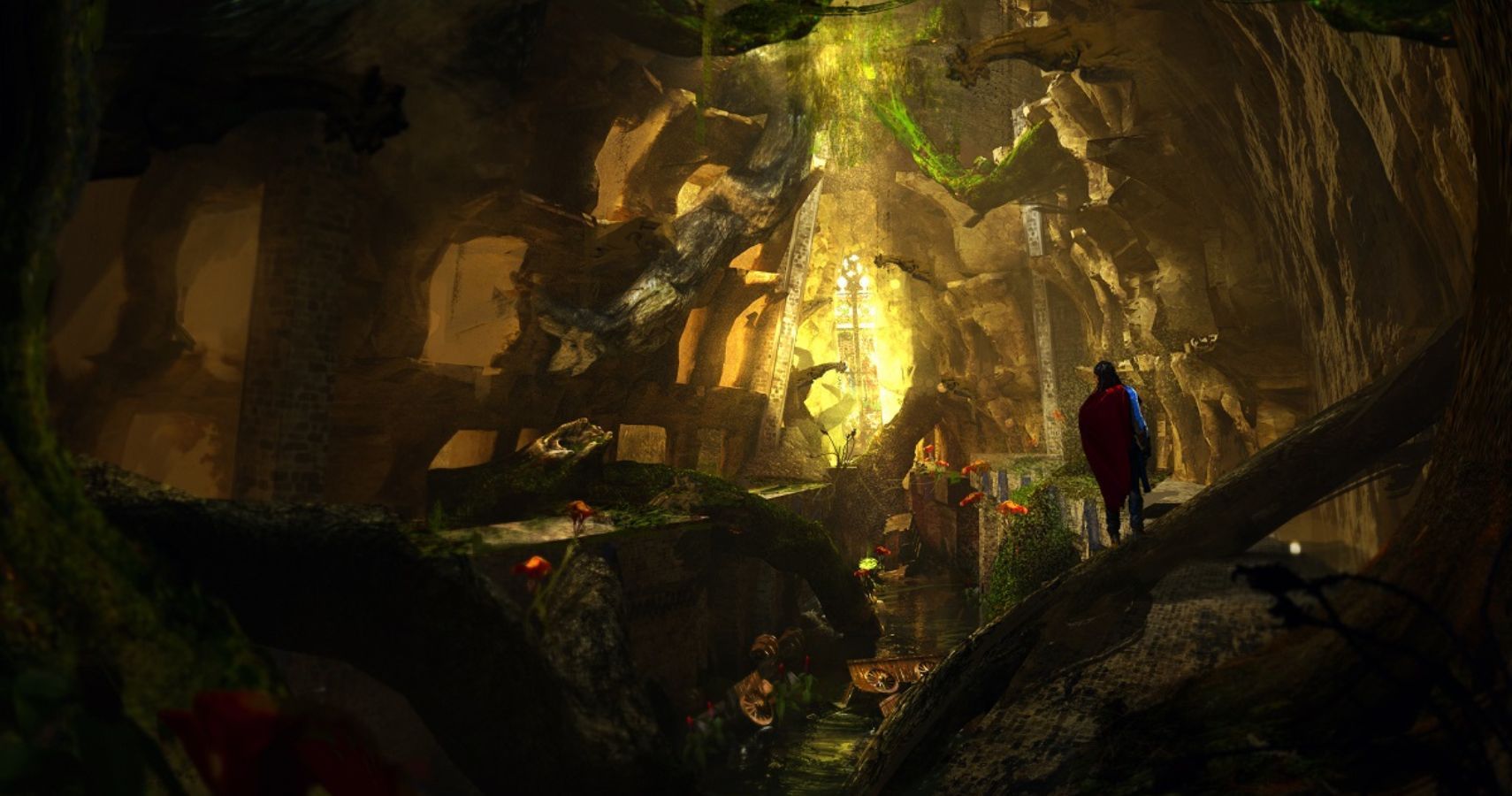