“People only find me interesting because they can’t tell whether I’m serious or not.”

I’m going to have to disagree with you on that one, Killua. There are precious few things we don’t see eye-to-eye on – I used to think you were a bit too willing to stab people, but that was just because of how you were brought up and you’ve made every conceivable effort to grow from it. You even admitted it yourself. “I’m so tired of killing,” you said. “I just want to be a kid. Hanging out, doing stuff with Gon. That’s it.”

This, Killua, is the real reason people find you interesting – because you are honest, caring, and genuinely trying to not only become a better person, but to have fun doing so. Given the grimdark nature of your background, it’s frankly incredible that you are capable of any of those things, let alone all of them, simultaneously and perpetually.

When I say that Killua Zoldyck is my favourite character of all time, I’m not just talking about Hunter x Hunter. I’m not just talking about anime, either – I mean across all fiction. Before you jump the gun and accuse me of not having read enough books or watched enough films, I spent years in university studying English literature. I’ve read all of the Classics and loads of weird, niche shit that barely anyone has heard of. I love Dickens and Austen, Tolkien and Martin, Vonnegut and Murakami. I’ve read at least three quarters of Shakespeare’s entire catalogue. I’m not saying Killua is great due to a lack of experience with well-written characters – I just genuinely reckon he’s the best one ever written. 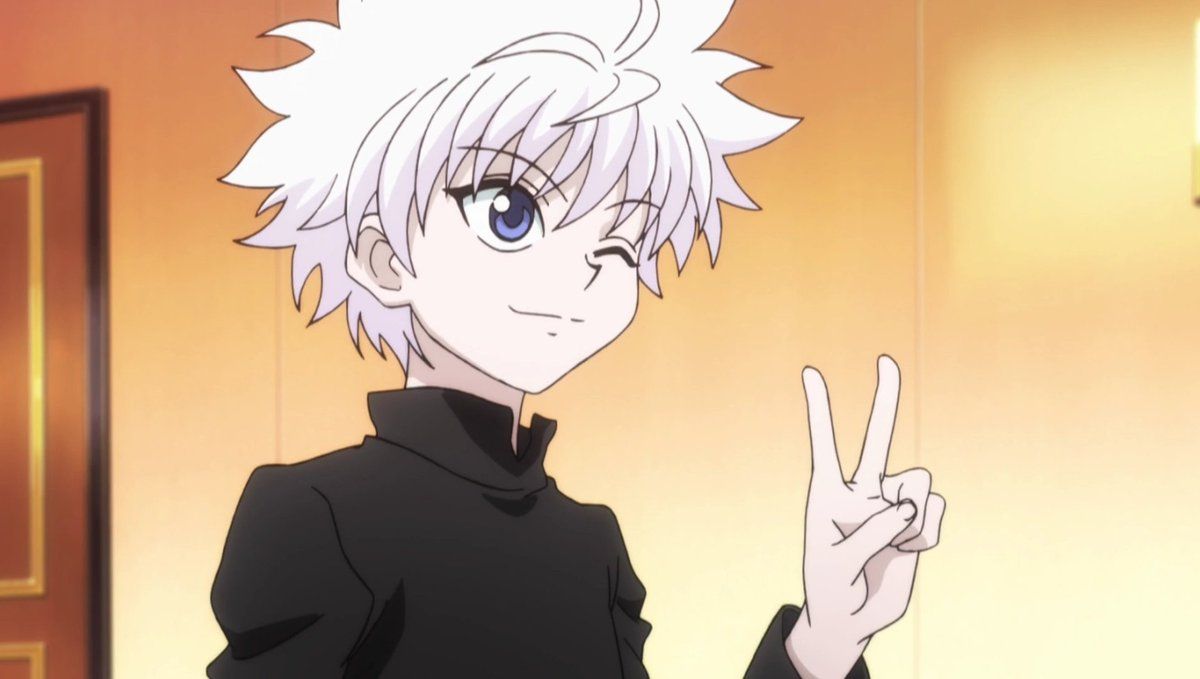 Killua Zoldyck is a 12-year-old assassin who has already killed potentially hundreds of people – it’s the family business, after all. We first encounter him in episode three of Hunter x Hunter after Gon, Leorio, and Kurapika arrive at the location for Stage One of the Hunter Exam. We don’t get much Killua here, or over the next couple of episodes, but his prominence in the opening sequence – combined with the relative clarity and stylishness of the shots that focus on him – already lets us know that he’s probably going to be pretty important later on.

The first thing of note that Killua does is drink loads of laxatives without getting the runs. He soon reveals that he is completely immune to poison. The next thing of note Killua does is a sick kickflip because Gon says he’s 12. This all happens within the first 45 seconds of Killua’s overall screen time. I mean, he’s clearly going to be a fascinating character, although the ambiguity of his motivations and background make it difficult to guess what his arc is going to be like.

To be honest, I originally thought that Killua was going to be at least partially antagonistic. He doesn’t care for Leorio or Kurapika at the beginning of the series and kills pretty much indiscriminately and for no reason. He’s also pretty edgy, at least visually – he sort of sways with a hands-in-pockets half-shrug and a skateboard tucked untidily beneath his arm, wearing an expression that says, “Are you finished yet?” His spiky white hair accentuates this persona even further, especially when it’s laced with lightning later on. 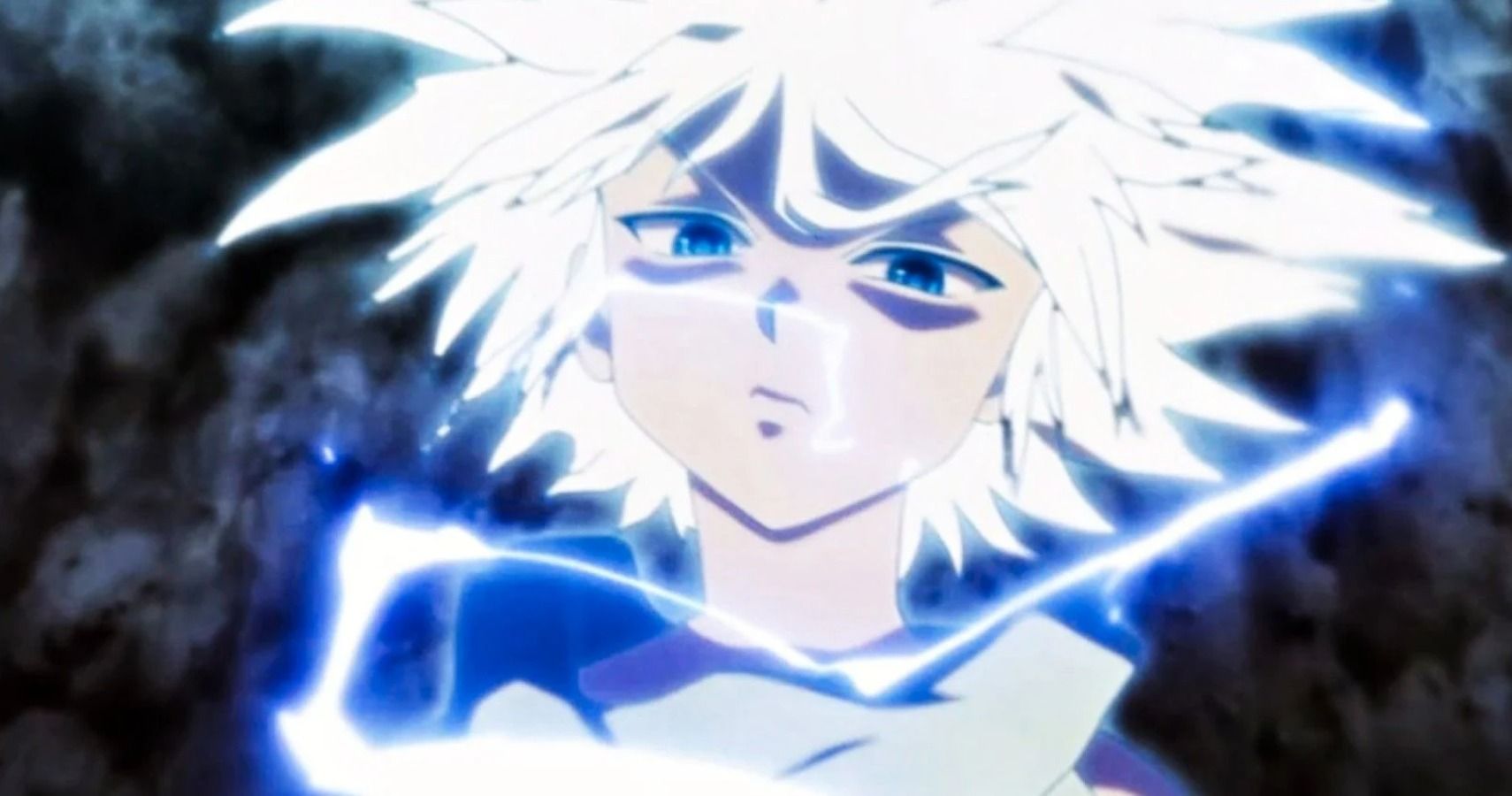 But Killua, despite having weird vampire claw fingernails, is not edgy. In fact, he’s anything but that. I think the best way to capture this is by referring to the best scene in Hunter x Hunter:

“Gon,” Killua says. “You are light itself. Sometimes you’re too bright and I can’t look at you… But can I still stay by your side?”

This is not only the best scene in Hunter x Hunter – it’s also the most important one. While Gon is technically the protagonist of the show, he’s nothing without Killua. I would go so far as to say that the main character in Hunter x Hunter is actually Gon and Killua’s relationship with one another. I would also argue that Killua puts far more into this relationship than Gon, as well as gaining more from it. There are several layers to this, but the most important one is the fact that while Gon changes Killua, Killua saves Gon. As in, time and time again, whether it be physically removing him from harm’s way or subtly steering him towards the right path, Killua is Gon’s guardian angel who wants nothing more than friendship in return.

This theme runs far deeper. Gon, naturally sociable and inherently friendly, does not struggle to be friends with Killua. His outgoing personality makes the changes we see in Killua much more visible, especially considering the fact that he goes from a mysterious and standoffish child assassin to somebody who jokes, and laughs, and shouts at Gon for being an idiot, but in a friendly way. Killua’s influence on Gon is more difficult to see, but equally valuable in terms of their interdependence. I think, if you’ve seen up until the end of the Chimera Ants arc, you’ll see just how much of Killua is in Gon, as well as how difficult it is for Killua to realize that. 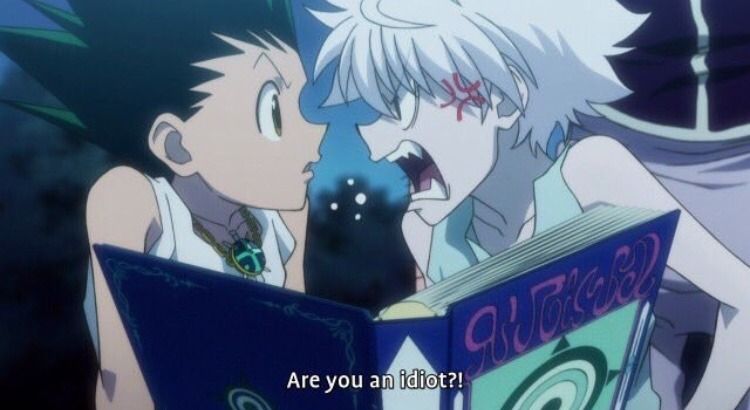 I think this is consistent with their characters, too. Gon’s got a remarkably sensitive nose, apparently being able to smell literal storms, as well as slight traces of cologne from about four miles away. Killua taps into something far more metaphysical, being able to sense dread and murderous intent. It’s no surprise that Gon’s influence on Killua is tangible and easily parsed, while Killua’s impact on Gon is far more subtle, operating on a subconscious level and being buried beneath walls of subtext.

I could honestly write about Killua forever – how he’s the only one who can regularly and reliably get through to Gon, and even when he can’t, knows what to do. I could discuss his relationship with Alluka – also known as Something or Nanika – which gives way to the second-best moment in Hunter x Hunter: “Nanika,” Killua says. “Will you forgive me for being a bad brother?” I’ve watched this scene so many times and it never feels like anything less than Killua plucking my heart out as if I’m Johness, convict number three in Trick Tower.

I think, as strong as Killua’s character is, the root of all his best parts can be attributed to a conversation he had with his father, Silva Zoldyck. While his mother, grandfather, and siblings disapprove of his friendship with Gon, Silva – while disappointed – almost seems relieved to discover that at least one of his sons has the drive and the heart to pursue a life without murder.

“Promise me one thing,” Silva says during his heart-to-heart with Killua. “Never betray your friends.” 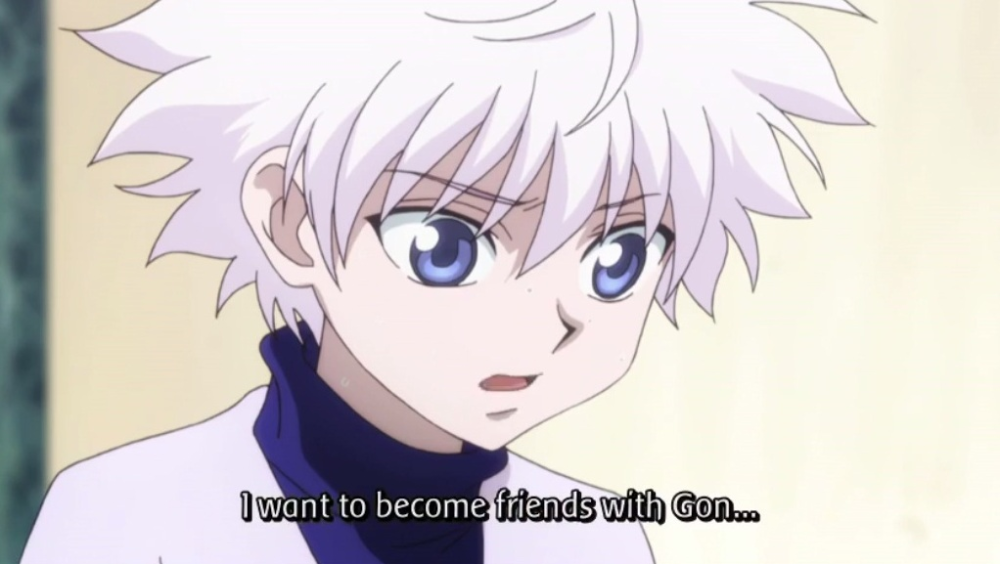 This is obviously juxtaposed with something Killua’s older brother, Illumi, regularly says throughout the series – that Killua can’t have friends because it is impossible for an assassin to make them. This causes Killua much grief throughout the series and becomes a lingering source of trauma for him, especially while he’s still under the influence of Illumi’s needles. Still, Killua manages to transcend the seemingly impossible not because he is more than just an assassin, or more than just a main character, but because he is driven entirely by friendship. We see this touched on in fiction a lot, but never to this extent. I have never seen a character as unflinchingly loyal as Killua. Sure, he looks cool and it’s exciting when you see him use Godspeed, but those are just tiny pieces of icing on the most delicious cake ever baked. They’re almost inconsequential when you consider the wider context of his character, which I think can be summed up by this one line. Thinking of the words his father spoke to him, Killua stops to ask himself:

“If I ignore a friend I have the ability to help, wouldn’t I be betraying him?”

The Killua we meet in episode three of Hunter x Hunter is more than willing to leave people behind. Throughout the series, he still remains cold and clinical in relation to people he doesn’t know. But in the final arc, when Gon’s body is damaged beyond repair and Alluka is being hunted down by Illumi and Hisoka, we see Killua’s growth in all of its glory. Some people call Chimera Ants the best arc, while others are fans of Greed Island. I adore the Election arc not because of any election, or because of Leorio’s jokes about jerking off before punching King Absentee Dad Ging Freeccs in his wanker face. I love this arc because it shows Killua for who he has become. It shows him leave his life of assassination behind, rescue his best friend from certain death, and save his sister from years of abuse at his family’s hands. Most of all, it sees Killua finally stand up to Illumi, his own brother, who sentenced him to suffer from all of the above in the first place.

At the end of Hunter x Hunter (2011), Gon finally meets Ging, neatly bookending the series. He set out to find his father and the last scene shows them perched on the World Tree together as two Hunters – as father and son.

This, thematically, is the perfect ending for Killua, too. He’s not there, but his influence on Gon is clearly visible. This makes us think of him – Gon even specifically mentions him – and, for once, the tables are turned. Here, Killua is allowed to have a tangible impact on Gon as opposed to the other way around, without even being present. I think, ultimately, that’s the surest sign of his 148-episode-spanning growth: that he’s able to be a friend without needing to try, and he’s happy to have a friend knowing that some day they’ll meet again.

Next: My Most Anticipated Game Of The Year Is The English Localization Of This Chinese RPG 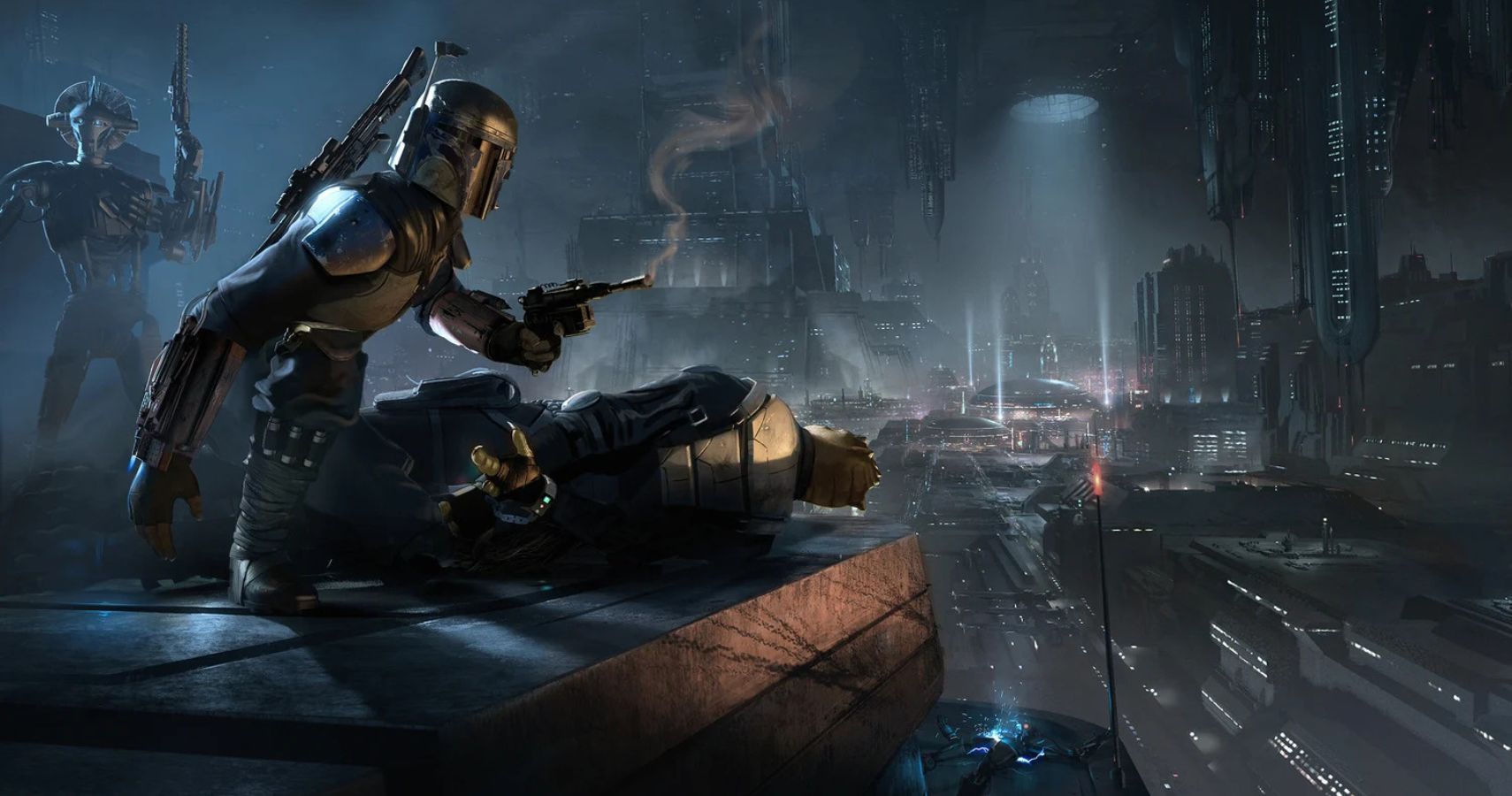