DEFCON is an extraordinarily bleak real-time strategy game set moments before the end of the world. Tucked away in an underground bunker, you use a retro-futuristic tactical map (inspired by '80s movie WarGames) to command troops, make strategic decisions, and ultimately wage thermonuclear war on your enemies. It isn't a particularly deep strategy game, but its cold, detached depiction of humanity obliterating itself is utterly harrowing.

DEFCON is short for Defence Readiness Condition—a series of numbered alert states, from 1 to 5, which determine how close the United States is to being on the receiving end of a nuclear attack. The lower the number, the more likely it is to happen. Grim stuff, but part of the reality of living in a world dominated by nuclear-equipped superpowers. This is the system that DEFCON, a 2006 game from Prison Architect creator Introversion, is designed around.

You start at DEFCON 5, placing radar dishes, missile silos, naval fleets, and air bases around your territory to prepare for war. Time is constantly ticking down, and things get more tense at DEFCON 4. Now you can see the movements of enemy units as they're pinged by your radar network. Then, when DEFCON 3 is triggered, the war begins. Skirmishes break out and the map explodes with activity. At DEFCON 2, the ferocity of this world war peaks. 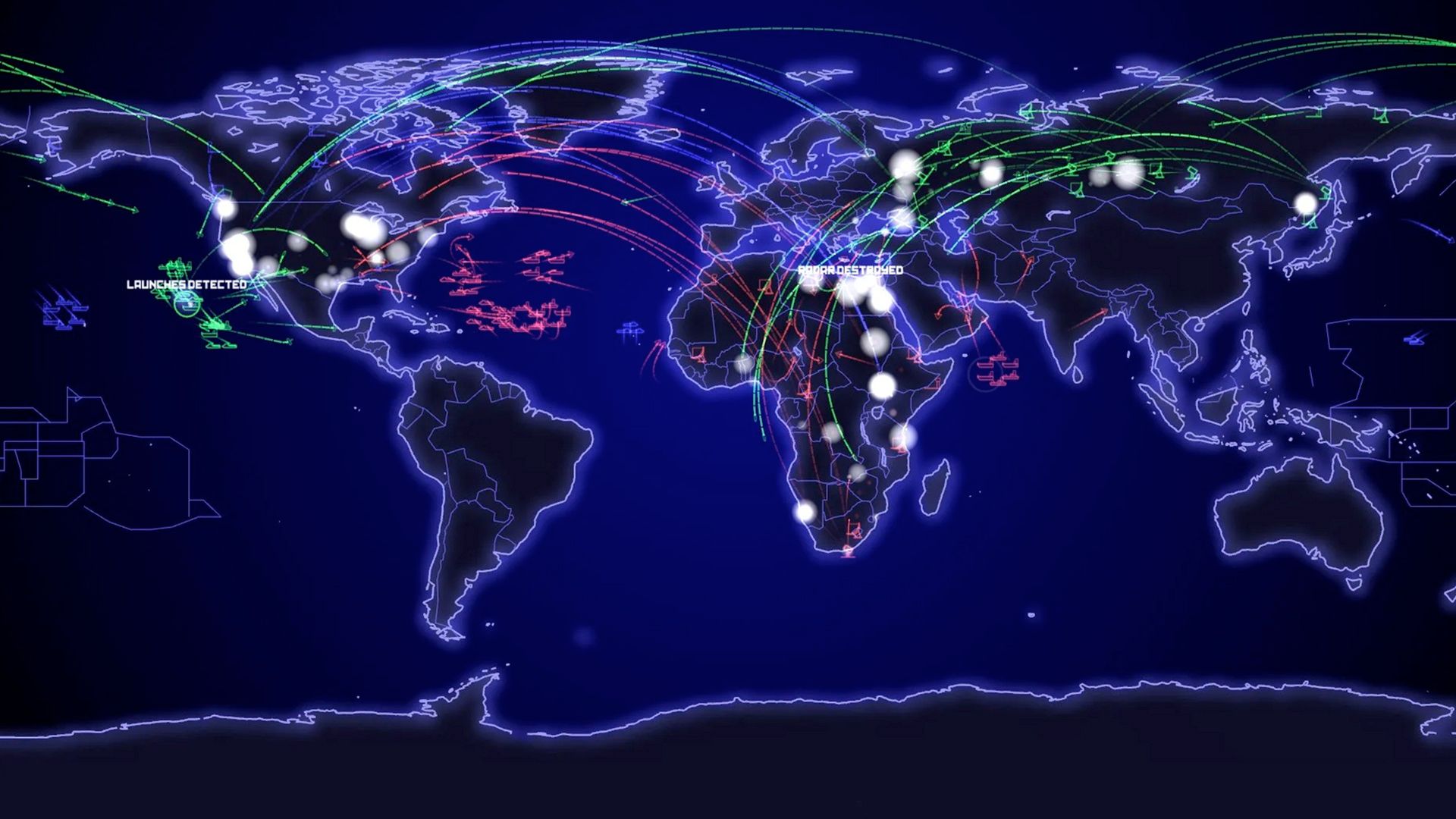 DEFCON 1 is the miserable, inevitable end to every game of DEFCON. There's no way around it. You're given the green light to use nukes, and the map suddenly erupts with white flashes indicating successful impacts. If a major city is hit, the number of casualties appears matter-of-factly over it: ROME HIT. 1.5 MILLION DEAD. There's no ceremony about it. No stirring music. Not even any sound effects. It just happens, and keeps happening all across the map.

DEFCON's presentation is what makes it such a powerfully unsettling game. As you watch the planet being engulfed in nuclear fire, you hear the soft murmur of voices in the background and the hum of the computers in the war room. Sometimes an unseen woman gently weeps, presumably realising that there's no coming back from this. The planet is fucked forever, and for what? It's a small detail buried in the audio mix, but profoundly distressing.

Watching the arcing trails of missiles creeping slowly across the map towards their targets is a terrifying image. And when it strikes, and you see that expanding white circle on the map, it's somehow more disturbing than it would be seeing a detailed cutscene showing a city being torn apart beneath a looming mushroom cloud. Your imagination fills in the horrifying blanks. It's destruction on a massive, cataclysmic, permanent scale—but at arm's length. 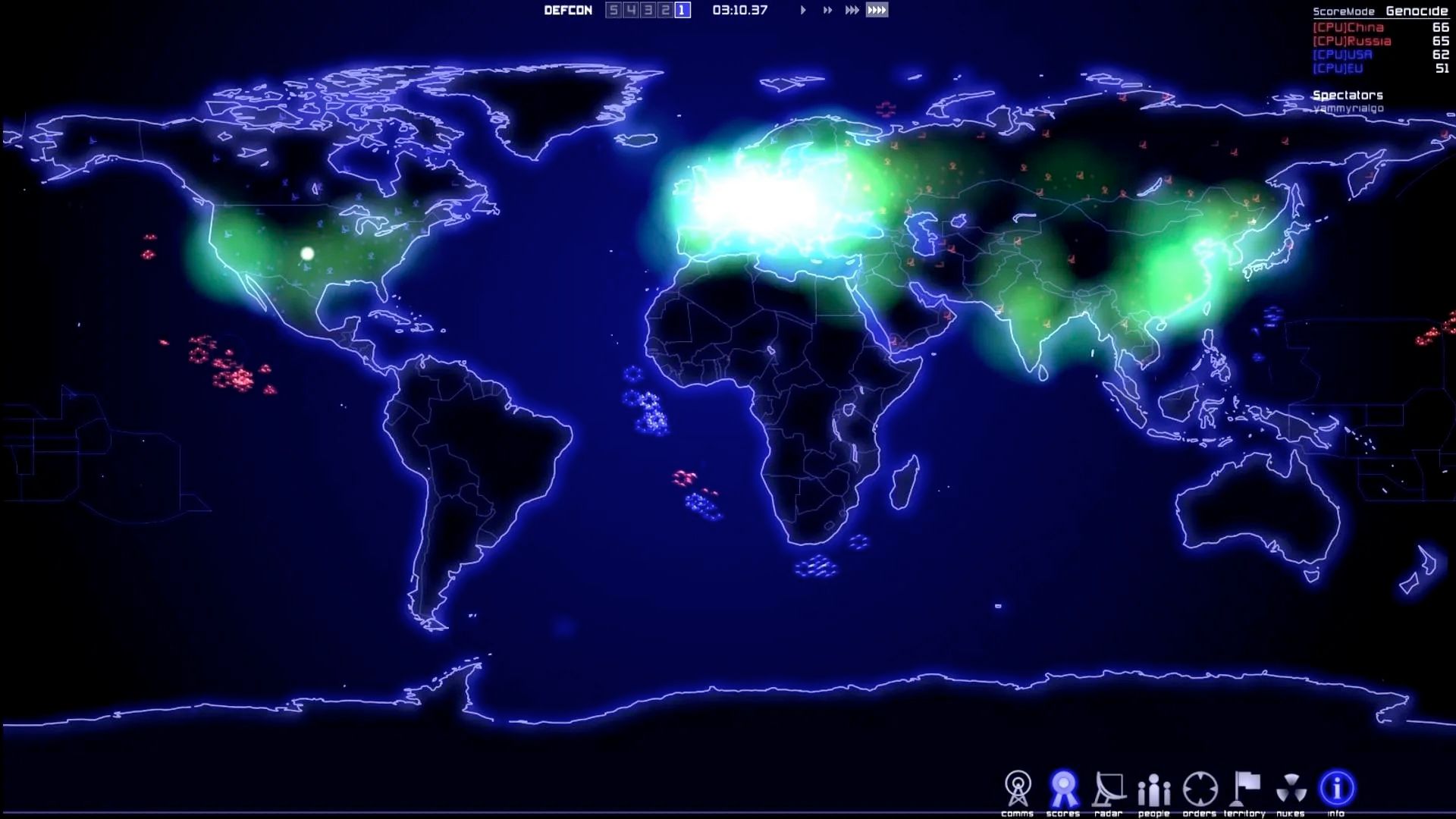 You can 'win' the war, but it's a hollow, pointless victory. The victor is the player with the most points when the game ends, but when you think about what's left afterwards—a razed, uninhabitable husk of a world—you think, well, they're welcome to it. The way DEFCON dispassionately illustrates the futility of nuclear war makes it one of the most striking and impactful pieces of anti-war media ever created, whether the developer intended it to be or not.

DEFCON is scarier than any horror game because you know human beings, idiots that we are, are capable of this level of ruinous self-destruction. There are around 14,000 nuclear warheads in the world right now, almost 4,000 of which are primed and ready to fire. That's enough to destroy civilization as we know it several times over. DEFCON is a stark reminder of that, which makes it much more than just another strategy wargame. It's a warning.