Tingle is one of the most contentious characters in the history of Zelda. On one hand, he was popular enough to star in three spin-off games in Japan, all of which were successful. On the other, he was the subject of an infamous IGN campaign from 2004 titled, “Die, Tingle, Die!” (which I reckon is totally slanderous).

Even the brief paragraph above is enough to prove that Tingle is polarizing, but I’d like to go on the record and say that I firmly believe he’s one of Nintendo’s most genius creations. While some folks aren’t particularly enthused by the self-proclaimed reincarnated fairy, I think this green-garbed, red-pantsed, 35-year-old balloon-borne cartographer is one of the most fascinating characters in all of Zelda – and I’m inclined to believe that Nintendo thinks so, too.

The reason I’m writing this piece in the first place is because Tingle creator Takaya Imamura retired from Nintendo last week. Imamura-san spent 32 years with the illustrious studio and is also credited as the mind behind iconic characters like Captain Falcon and Fox McCloud. I’m here to argue that – and I’m sorry in advance if you’re an F-Zero or Star Fox stan – Tingle was Imamura-san’s magnum opus. 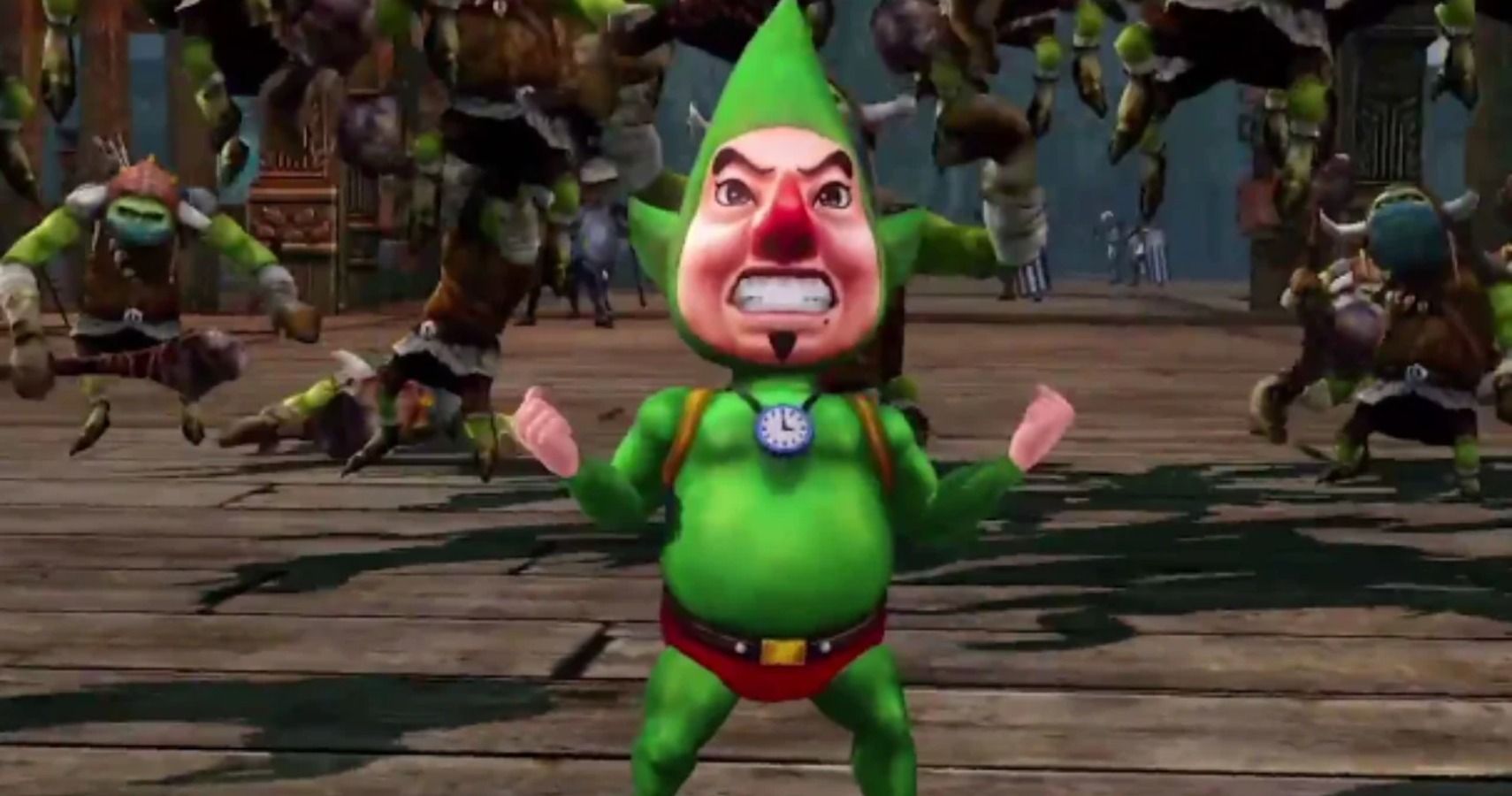 Tingle first appeared in 2000’s The Legend of Zelda: Majora’s Mask. In a 2015 interview with Kotaku, Zelda producer Eiji Aonuma explained that the character was originally designed as a method of providing players with access to maps throughout the game.

“So, we thought, what if you had to buy maps?” Aonuma said. “Then suddenly we needed a character that you would be buying maps from. We ultimately ended up with a character here that had a little bit of humor to him that [came from] thinking of…’What sort of person would sell a map?’ And, well, we decided it would be the kind of person who makes a map. And the way that he makes a map is by floating through the air so that he can see the contours of the land and draw them.

“But as soon as we got that far in the process, we realized anybody that would fly through the air making a map has got to be a really weird person. So at that point we decided, okay, we’ll go with this and make him a really weird guy.”

Nintendo obviously succeeded in its mission to make Tingle weird, largely thanks to Imamura-san eschewing aestheticism for absurdism. Granted, Majora’s Mask’s art direction is pretty wild across that board – think of that grimacing Moon! – but Tingle somehow floats head and shoulders above the rest. At least until you shoot his red balloon and watch him eat dirt. 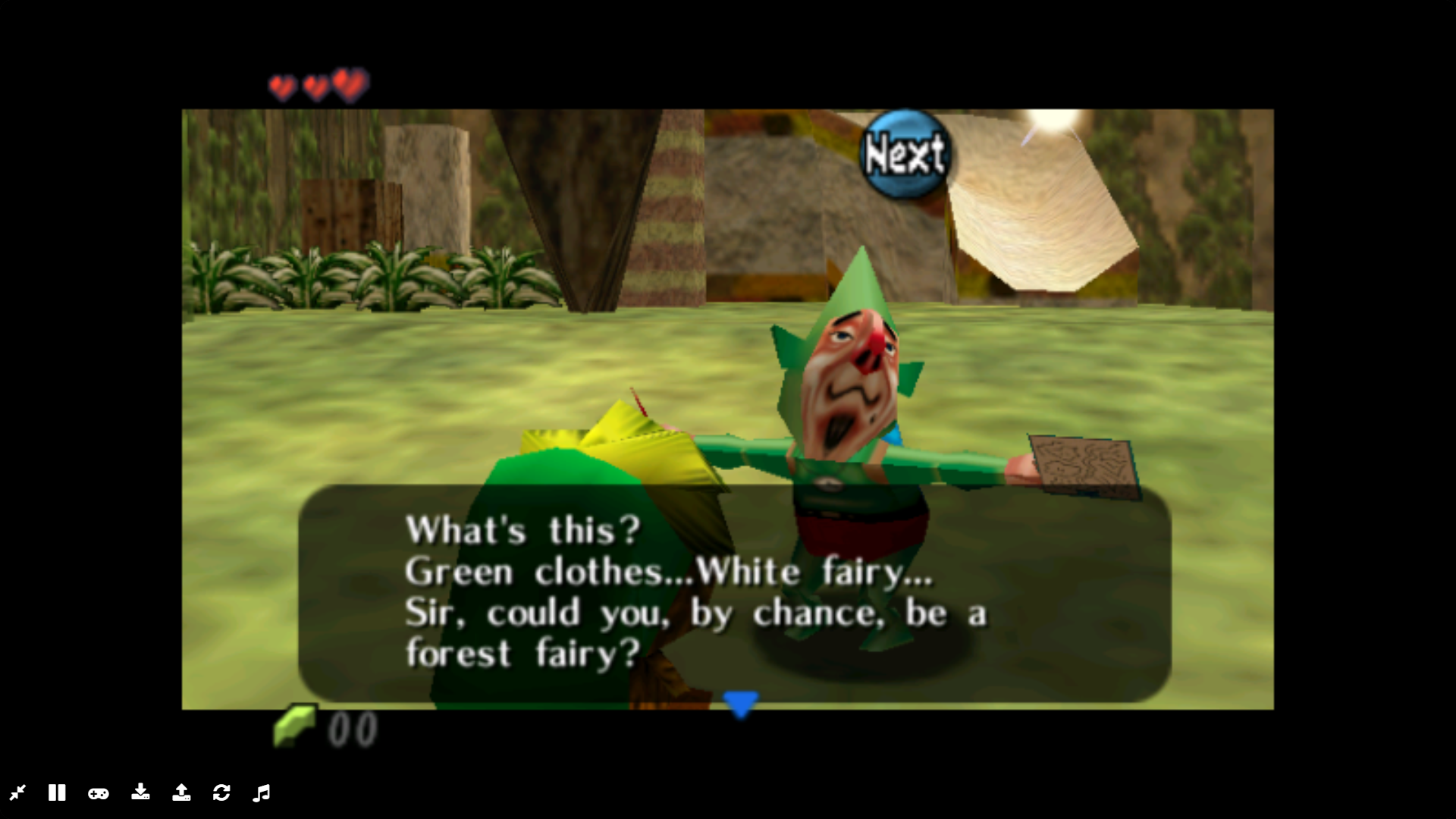 But yeah. Tingle was ranked five on Zelda Dungeon’s list of the series’ most disturbing characters. He also made GamesRadar’s top ten most unintentionally creepy characters, and, in accordance with its former Die, Tingle, Die! campaign, was ranked number one on IGN’s list of the weirdest Zelda characters ever (his brothers – and non-brother, David Jr. – were also collectively ranked number 19). It’s worth noting that even Tingle’s dad is disappointed in the fact that his son dresses up as a forest fairy and wears a necklace with a clock that, for some reason, is always set to 4pm.

All of the above being said, I think it suffices it to say that I am aware of all the main arguments as to why Tingle is bad. And so, now I can move on to explain why, actually, Tingle is the product of sheer genius.

My first point is that Imamura-san himself is a genius, as well as being a little bit weird. As it turns out, he designed Tingle, the angry Moon, and the eponymous Majora’s Mask. He also named the game – Majora is, in Imamura’s own words, a combination of characters from his name and Jumanji. Amazing. It’s also worth noting that Tingle’s catchphrase – Kooloo-Limpah! – is often considered to be a derivation of “kururinpa.” This, reader, is the sound Japanese people make when they’re doing the crazy sign – you know, where you wag your finger around your temple in a circle after your mate says something a bit… odd.

Beyond that, Tingle quickly became one of Zelda’s most recognizable characters, to the extent that he became one of its most experimental aspects. As previously mentioned, Tingle was initially conceived of as a riposte against simply giving you a fully-charted map and saying, “Off you go.” Instead, you now had to earn enough Rupees to purchase one from him – the fact he was so odd and had to be shot down from his balloon-mobile further compounded the act of consciously getting a new map. 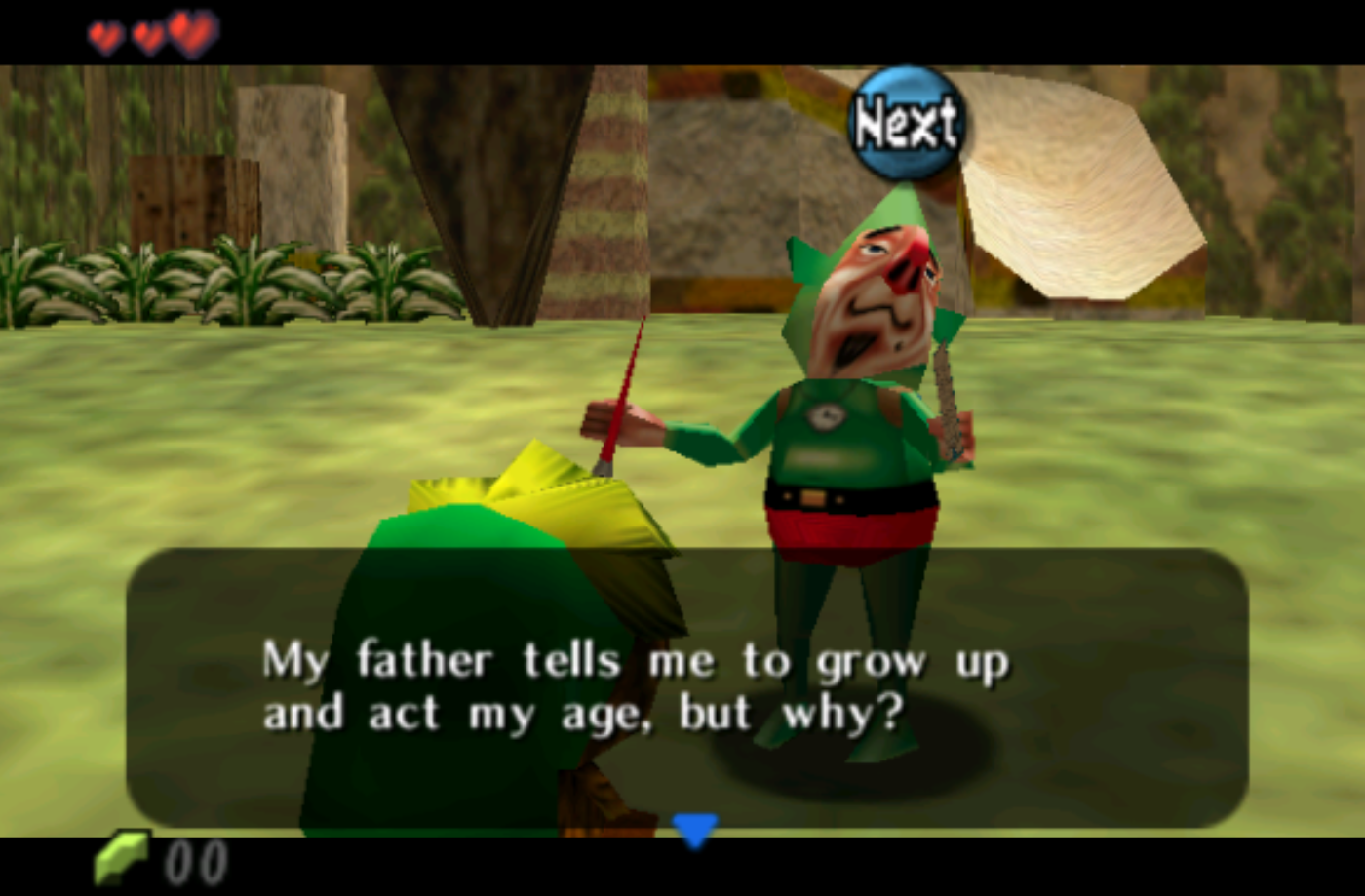 This experimentation translated to his next appearance in The Wind Waker, where Tingle the fairy quite literally became a medium for some classic Nintendo magic (after you busted him out of prison). I’m not sure if you remember, but the GameCube version of The Wind Waker allowed you to use an in-game item called the Tingle Tuner to connect a GameBoy Advance to your console. Once you set this up, a second player could join you on your quest and play as Tingle. It’s not something everybody was particularly impressed with, but it’s a typically untypical example of Nintendo at its best and most weird. In a lot of ways, I think Tingle is a far more apt mascot for the company than Link, Mario, or Pikachu – he’s a weird and wonderful grown-up child who nobody believes is as magical as he thinks himself to be, and yet, time and time again, he proves that he is telling the truth… sort of.

This goes further. Tingle’s childlike disposition is the only reason he helps you in the first place. He gives you maps “for cheap” because he considers you a friend and fellow fairy, and he can even recognize Deku Link because he’s paying attention to Tatl. No matter how strange Tingle is, his utility – combined with his undying belief that he is, in fact, a forest fairy – is a stand-in for the importance of retaining the creativity, enthusiasm, and unflinching vitality that is so often lost during the process of growing up. He’s a concrete example of the kind of magic that makes up a Nintendo game – an adult who is still in touch with their younger self, and is absolutely unwilling to ever sever that connection.

This is probably why I hold the Capcom Zelda games in such high esteem. These titles were much more willing to get as weird as Majora’s Mask was – in Minish Cap, Tingle has recruited his brothers and mate to dress up like fairies (again) and told them to fuse Kinstones with people in order to become magical. The funniest bit about this is that fusing Kinstones with Tingle actually does have a magical effect on the world, but he’s far too interested in his own imagination to notice.

I realize that I’m making a relatively personal case for Tingle here, and recognize what I stated at the beginning of this piece – that Nintendo loves Tingle, too. This is probably most easily proven by referring to VentureBeat’s 2013 interview with Nintendo producer Kensuke Tanabe, during which he specifically stated that he’d love to make a future Tingle game. Unfortunately, it’s pretty well-known that Tingle wasn’t very well-liked by Western audiences, which is largely why Purlo in Twilight Princess exists – he’s a more realistic-looking version of Tingle and doesn’t believe he’s a fairy, and was only put in the game so the Zelda devs could have at least some Tingle DNA present.

Also, if that wasn’t enough, The Wind Waker’s Tingle Tuner literally has the word “Chintendou” scrawled across it in Hylian. This combines Tingle’s Japanese name, Chinkuru, with Nintendo itself, making it a literal compound noun designed to bring the fairy and studio together.

Still not convinced? Here’s a quickfire round of my favourite things about Tingle:

What’s that? You still hate him? Alright, then. Tingle, Tingle, Kooloo-Limpah! Now you’re Tingle, too.

Next: Everything You Need To Know About Dragon Age 4’s New Setting 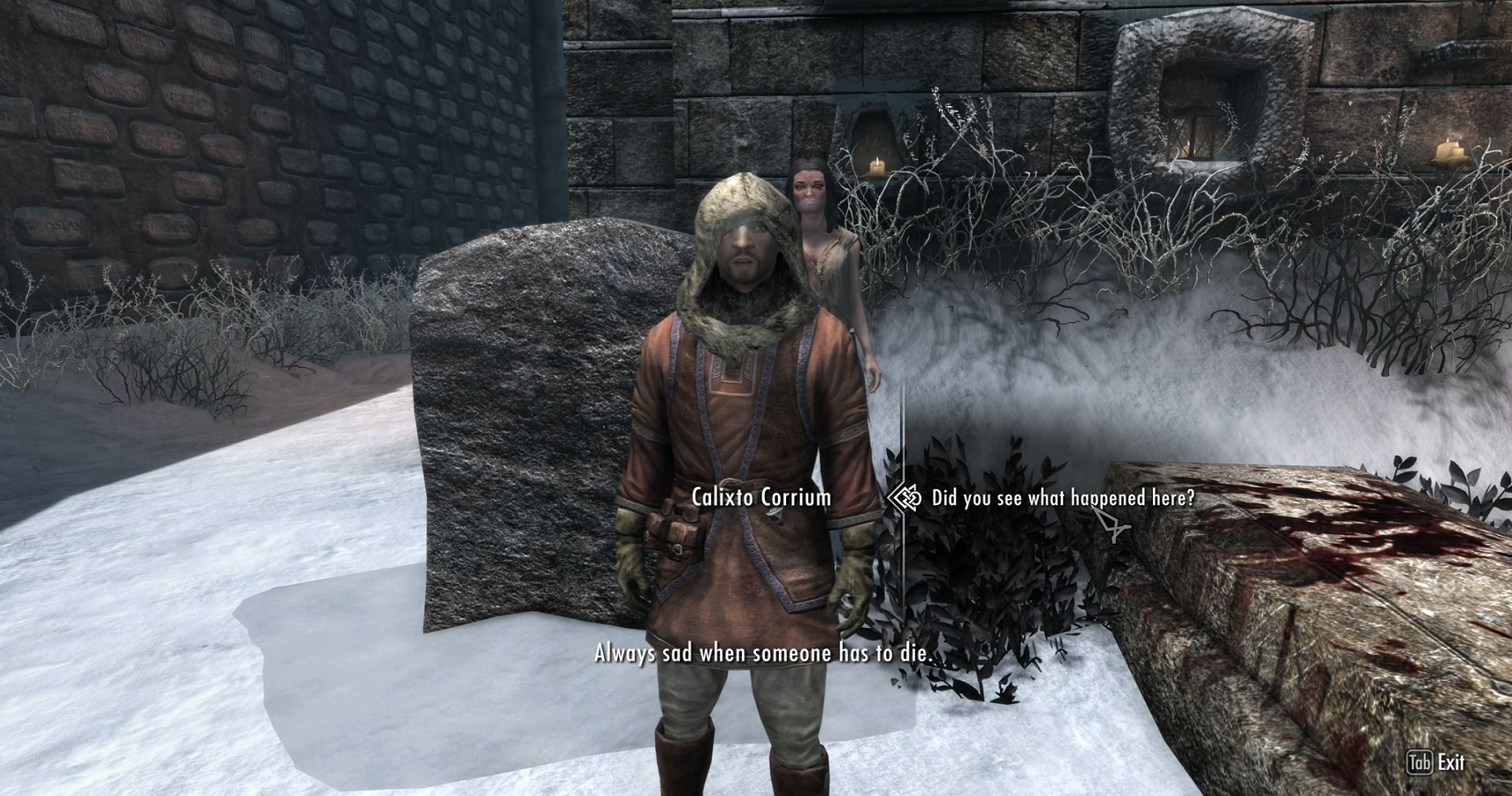