Sable, the gorgeous, sandy blend of Journey and Team Ico, doesn’t launch until September 23, although you can currently play a free demo on Xbox Series X/S. It’s not the lengthiest snippet around town – there’s probably about 90 minutes’ worth of objectives to complete – although this alone is indicative of how Sable is more concerned with density than some kind of overwhelming scale.

I spent at least four hours playing yesterday, wrapping my sand bike around arcane pillars or hurtling myself over dunes and towards ruins imbued with a sort of mysterious, ethereal magic. That’s before I unlocked gliding, which – get this! – isn’t just another Breath of the Wild rip-off. Instead of the way-too-ubiquitous glider we’ve seen nine million times in the last few years, you conjure a red orb that encloses your body and changes the way physics work. It looks breezy and feels breezier, and like everything else in this demo, it lies in natural cohesion with every other part.

I’m still not particularly clued into the story. I know that Sable, our eponymous hero, is tasked with going on what’s known as her Gliding, a ritualistic challenge that young Ibexii embark on after being given their very own bike by the tribe’s resident Machinist. Sable has mixed feelings on this, although you have limited – but still actionable – control over them. I tried to play a confident Sable, telling Hilal that I’m excited for the Gliding instead of admitting that, actually, I’m a bit nervous, but regardless of the choices you make, Sable is a special character who is true to herself despite your intervention. Ultimately, she’s both excited and nervous. She’s curious and cautious, clever and childlike, capable and crude, all at the same time. With your help, though, she can experience the wonder of this weird world, teeming with dog-sized beetles, ravaged space cruisers, and all manner of strange little people with their own hopes and dreams, trials and tribulations, regrets and vignettes. 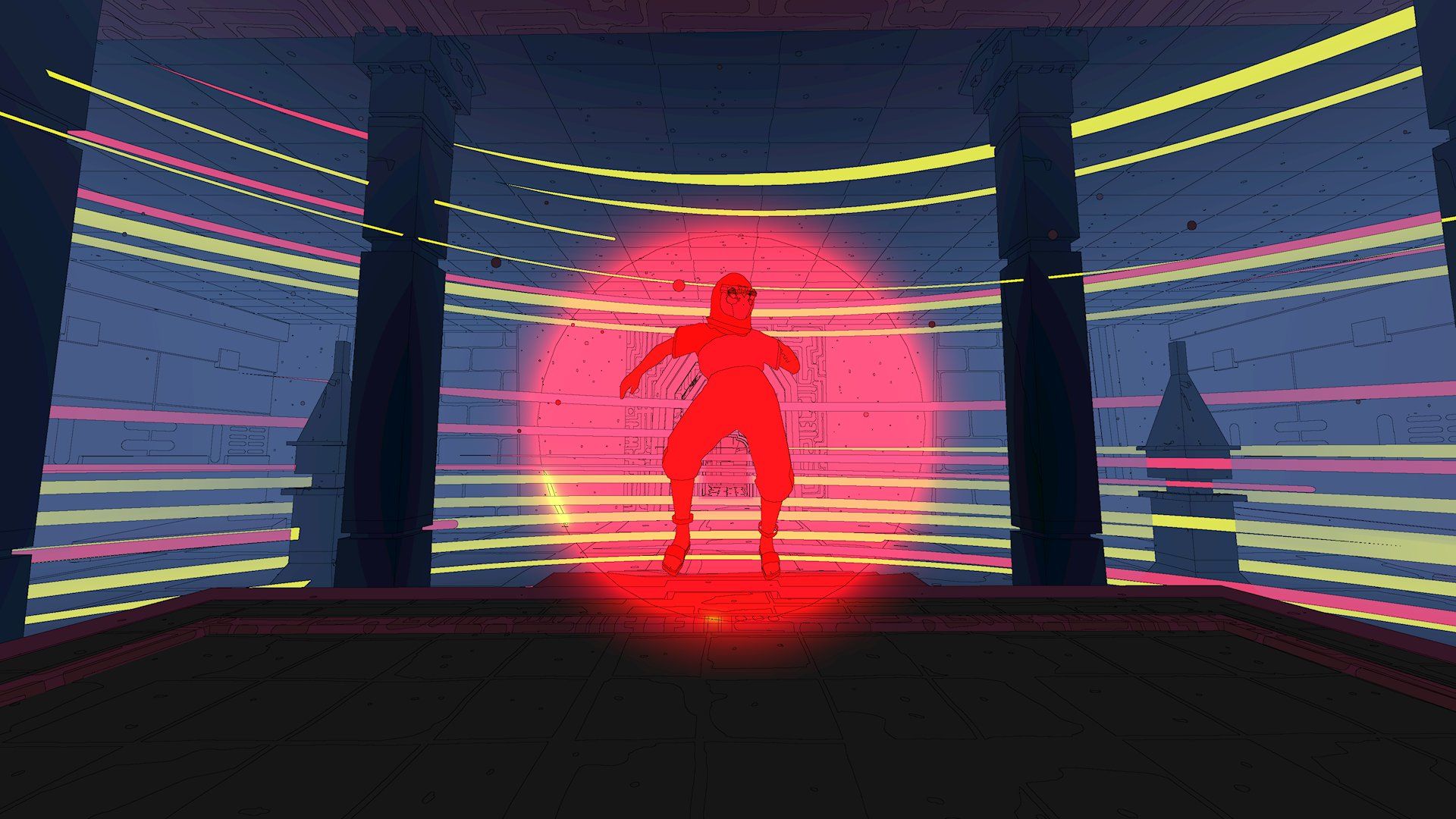 All of this is conducive to the overall worldbuilding, which is remarkably strong and coherent even in this short demo. Sable’s willingness to throw jargon at you like Old Machines, Ibexii, Machinist, and so on asserts a kind of self-confidence that is more than capable of convincing you that this world is functional and fleshed out in a way that seems palpable. But this is just part of what makes Sable so special – yes, its world is intriguing to knock about in and its lore is more than worth delving into, but it’s the actual exploring, the act that combines these two actions, that makes Sable unique and allows it to transcend being worthwhile in order to prove itself as essential. When I first booted up the game, I thought the controls were a bit finicky – you know when you turn left in a game, right, and all of a sudden you’ve done a full 180 instead of a 90-degree turn because the pivot is off? That. Except I quickly realized I was wrong – Sable just has its own sensitivity and functionality, and once you’re used to it, it’s smoother than whiskey down Tom Waits’ gullet.

But this isn’t really it, either. Yes, the jumping, climbing, gliding, and rest of the Breath of the Wilding is nice, and fluid, and satiny, but Sable is bound by its bikes. I don’t think this is much of a spoiler – it’s just the demo, after all – but you drive a man named Driss’ bike throughout this introductory snippet. It’s mostly fetch quests within fetch quests, but it’s not like other games where you’re just ticking off a checklist to see an arbitrary number go up. The fact you need to use a compass to navigate, combined with the juxtaposition of vehicular strafing and boots-on-the-ground mobility, means that the fetch quests are the monkey bars in a playground filled with much larger and more striking structures. Even your final task, which is to gather the components for your own ride, doesn’t feel conventionally fetchy, to the point that when “Sable” comes up on the top left of the screen and you get the option to wishlist it as soon as the bike’s ready… here, at least let me go for a spin, like? Smh. 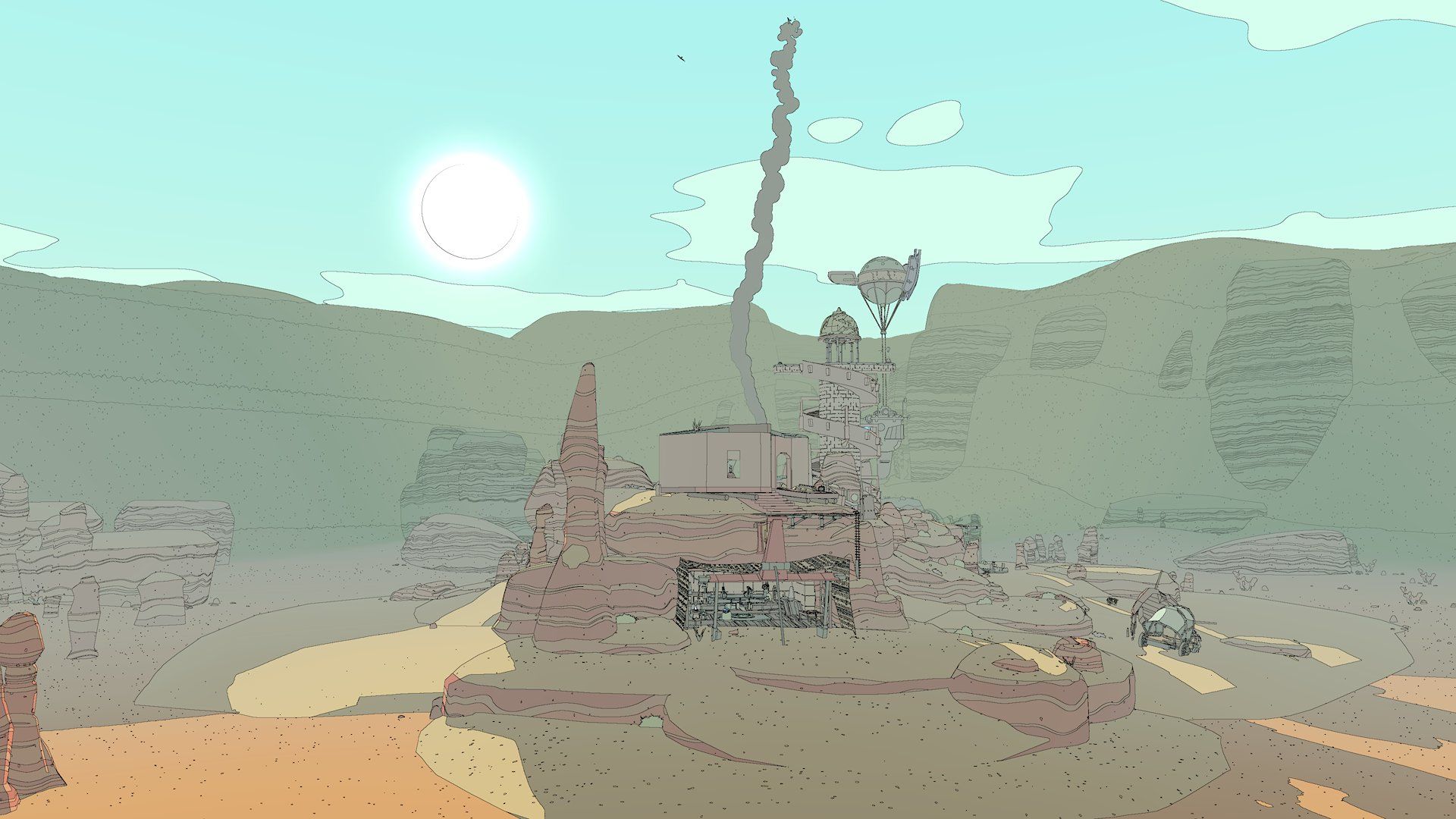 Seriously, though, I got to that point and was just like, well I need to hit the sand on my new ride ASAP (As Sable, Amazing and Perfect). I booted the demo up again from the start, but it wasn’t my bike, which the local Machinist, Sizo, named “Simoon” for me. As soon as the parts came together, that’s the name she apparently heard. “Bollocks,” I thought. I wanted to name it after Moro, the great big wolf in Princess Mononoke, but no, I got Simon with an extra ‘o.’ But get this: I guarantee that after spending some time whizzing around the desert on Simon with an extra ‘o,’ I’ll think to myself, “Thanks, Sizo, for listening to the bike’s name before I set out on my Gliding.” I still don’t really know what a Gliding is, exactly, but the fact I’m desperate to find out says it all, innit.

So, if you have an Xbox Series X or Xbox Series S, do yourself a favour. Go onto the Microsoft Store, type in Sable, download the demo – which is only about 1.8GB and should install lightning fast – and play it. Just sit down, drink in the scenery, and nip about on Driss’ bike for a bit. I’m sure some of you won’t agree with me that it’s the most impressive thing to have come out so far this year, but do you know what? I reckon loads of you will, because Sable’s value and extreme grace, integrity, and excellence are irrefutable, and I bet you’ll be shaking your head at the fact you need to wait three months to take Simon with an extra ‘o’ out for a spin, too.