Parameters are the key to machine learning algorithms. They’re the part of the model that’s learned from historical training data. Generally speaking, in the language domain, the correlation between the number of parameters and sophistication has held up remarkably well. For example, OpenAI’s GPT-3, one of the largest language models ever trained at 175 billion parameters, can make primitive analogies, generate recipes, and even complete basic code.

In what might be one of the most comprehensive tests of this correlation to date, Google researchers developed and benchmarked techniques they claim enabled them to train a language model containing more than a trillion parameters. They say that their 1.6-trillion-parameter model, which appears to be the largest of its size to date, achieved an up to 4 times speedup over the previous-largest Google-developed language model (T5-XXL).

As the researchers note in a paper detailing their work, large-scale training is an effective path toward powerful models. Simple architectures, backed by large datasets and parameter counts, surpass more far more complicated algorithms. But while effective, large-scale training is extremely computationally intensive. That’s why the researchers pursued what they call the Switch Transformer, a “sparsely-activated” technique that uses only a subset of a model’s weights, or the parameters that transform input data within the model.

The Switch Transformer builds on mixture of experts, an AI model paradigm first proposed in the early ’90s. The rough concept is to keep multiple experts, or models specialized in different tasks, inside of a larger model and have a “gating network” choose which experts to consult for a given data.

The novelty of the Switch Transformer is that it efficiently leverages hardware designed for dense matrix multiplications — mathematical operations widely used in language models — such as GPUs and Google’s tensor processing units (TPUs). In the researchers’ distributed training setup, their models split unique weights on different devices so that the weights increased with the number of devices but maintaining a manageable memory and computational footprint on each device.

In an experiment, the researchers pretrained several different Switch Transformer models using 32 TPU cores on the Colossal Clean Crawled Corpus, a 750GB-sized dataset of text scraped from Reddit, Wikipedia, and other web sources. They tasked the models with predicting missing words in passages where 15% of the words had been masked out, as well as other challenges like retrieving text to answer a list of increasingly difficult questions. 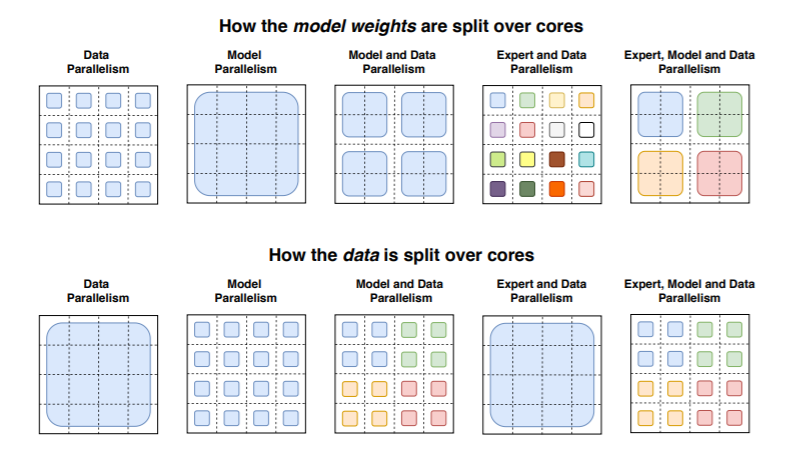 The researchers claim their 1.6-trillion-parameter model with 2,048 experts (Switch-C) exhibited “no training instability at all,” in contrast with a smaller model (Switch-XXL) containing 395 billion parameters and 64 experts. However, on one benchmark — the Sanford Question Answering Dataset (SQuAD) — Switch-C scored lower (87.7) versus Switch-XXL (89.6), which the researchers attribute to the opaque relationship between fine-tuning quality, computational requirements, and number of parameters.

This being the case, the Switch Transformer led to gains in a number of downstream tasks. For example, it enabled an over 7 times pretraining speedup while using the same amount of computational resources, according to the researchers, who demonstrated that the large sparse models could to be used to create smaller, dense models fine-tuned on tasks with 30% of the quality gains of the larger model. In one test where a Switch Transformer model was trained to translate among over 100 different languages, the researchers observed “a universal improvement” across 101 languages, with 91% of the languages benefitting from an over four times speedup compared with a baseline model.

“Though this work has focused on extremely large models, we also find that models with as few as two experts improves performance while easily fitting within memory constraints of commonly available GPUs or TPUs,” the researchers wrote in the paper. “We cannot fully preserve the model quality, but compression rates of 10 to 100 times are achievable by distilling our sparse models into dense models while achieving ~30% of the quality gain of the expert model.”

In future work, the researchers plan to apply the Switch Transformer to “new and across different modalities,” including image and text. They believe that model sparsity can confer advantages in a range of different media as well as multimodal models.

Unfortunately, the researchers’ work didn’t take into account the impact of these large language models in the real world. Models often amplify the biases encoded in this public data; a portion of the training data is not uncommonly sourced from communities with pervasive gender, race, and religious prejudices. AI research firm OpenAI notes that this can lead to placing words like “naughty” or “sucked” near female pronouns and ” Islam” near words like ” terrorism.”  Other studies, like one published by Intel, MIT, and Canadian AI initiative CIFAR researchers in April, have found high levels of stereotypical bias from some of the most popular models, including Google’s BERT and XLNet, OpenAI’s GPT-2, and Facebook’s RoBERTa. This bias could be leveraged by malicious actors to foment discord by spreading misinformation, disinformation, and outright lies that ” radicalize individuals into violent far-right extremist ideologies and behaviors,” according to the Middlebury Institute of International Studies.

It’s unclear whether Google’s policies on published machine learning research might’ve played a role in this. Reuters reported late last year that researchers at the company are now required to consult with egal, policy and public relations teams before pursuing topics such as face and sentiment analysis and categorizations of race, gender or political affiliation. And in early December, Google fired AI ethicist Timnit Gebru, reportedly in part over a research paper on large language models that discussed risks including the impact of their carbon footprint on marginalized communities and their tendency to perpetuate abusive language, hate speech, microaggressions, stereotypes, and other dehumanizing language aimed at specific groups of people.