In June, the U.S. National Highway Traffic Safety Administration (NHTSA) detailed the Automated Vehicle Transparency and Engagement for Safe Testing (AV TEST), a program that purports to provide a robust source of information about autonomous vehicle testing. Today marked the official launch of AV TEST after several months of ramp-up, beginning with a tool for tracking driverless pilots in 17 cities across nine states. But despite lofty promises from the NHTSA of the transparency AV TEST might herald, its first iteration — at least from first impressions — is bare-bones at absolute best.

The ostensible goal is to shed light on the breadth of vehicle testing taking place across the country. Owing to a lack of public data around autonomous vehicles, Partners for Automated Vehicle Education (PAVE) reports a majority of Americans don’t think the technology is “ready for primetime.” The federal government maintains no public database of autonomous vehicle reliability records, and while states like California mandate that companies testing driverless cars disclose how often humans are forced to take control of the vehicles, critics assert that those are imperfect measures of safety.

“The more information the public has about the on-road testing of automated driving systems, the more they will understand the development of this promising technology,” NHTSA deputy administrator James Owens said during a web briefing. “Automated driving systems are not yet available for sale to the public, and the AV TEST Initiative will help improve public understanding of the technology’s potential and limitations as it continues to develop.” 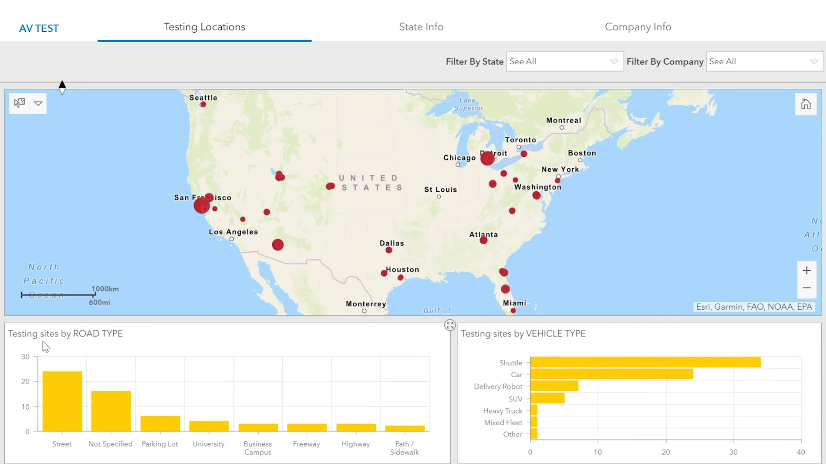 Above: A screenshot of the AV TEST tracking tool.

Some of the AV TEST tool’s stats are admittedly eye-catching, like the fact that participants in the program are conducting 34 autonomous shuttle, 24 autonomous car, and 7 delivery robot trials in the U.S. But they aren’t especially informative. A number of pilots don’t list the road type (e.g., “street,” “parking lot,” “freeway,”) where testing is taking place, and the entries for each location tend to be light on the details. Waymo reports that it’s conducting “Rain Testing” in Florida, for instance, but declined to specify the number or models of vehicles involved. Cruise was more forthcoming about its tests in San Francisco, but it opted to provide an approximate rather than an exact number of vehicles.

The incompleteness of the data aside, participation in the AV TEST program appears to be uneven at launch. Major stakeholders like Pony.ai, Baidu, Tesla, Argo.AI, Amazon, Postmates, and Motion have apparently declined to provide data for the purposes of the tracking tool or have yet to make a decision either way. The net effect is a database that’s less useful than it might otherwise be; while the AV TEST tracking tool reports that there are 61 pilots currently active, the actual number is likely to be far greater.

It also remains to be seen how diligently NHTSA will maintain the database. Absent a vetting process, companies have wiggle room to underreport or misrepresent tests taking place. And because the AV TEST program is voluntary, there’s nothing to prevent participating states and companies from demurring as testing resumes during and after the pandemic.

“Unfortunately, NHTSA’s reliance on voluntary industry actions to accomplish this is a recipe for disaster,” Advocates for Highway Safety president Cathy Chase said of the AV TEST program earlier this summer. “It has been reported that at least 80 companies are testing autonomous vehicles. Yet, only 20 have submitted safety assessments to the U.S. DOT under the current voluntary guidelines, iterations of which have been in place for nearly four years … Additionally, over that time, the National Transportation Safety Board has investigated six crashes involving vehicles with autonomous capabilities uncovering serious problems, including inadequate countermeasures to ensure driver engagement, reliance on voluntary reporting, lack of standards, poor corporate safety culture, and a misguided oversight approach by NHTSA.”

Tellingly, the AV TEST program’s launch comes as federal efforts to regulate autonomous vehicles remain stalled. The DOT’s recently announced Automated Vehicles 4.0 (AV 4.0) guidelines request — but don’t mandate — regular assessments of self-driving vehicle safety, and they permit those assessments to be completed by automakers themselves rather than by standards bodies. (Advocates for Highway and Auto Safety also criticized AV 4.0 for its vagueness.) And while the House of Representatives unanimously passed a bill that would create a regulatory framework for autonomous vehicles, dubbed the SELF DRIVE Act, it has yet to be taken up by the Senate. In fact, the Senate two years ago tabled a separate bill (the AV START Act) that made its way through committee in November 2017.

All of this raises the question of whether the AV TEST program will be able to move the needle on autonomous car safety.